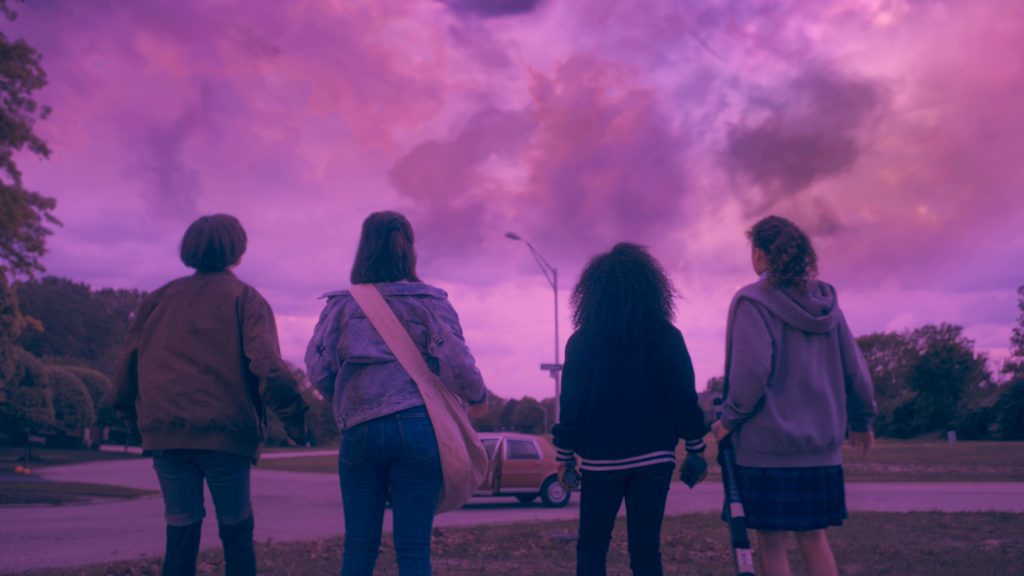 What if you, as a young adult, got the chance to interact with your future self? Would you have to be pleased with the person you were destined to become? What if as an adult, you encountered a younger, more optimistic version of yourself? One that hasn’t been crushed by the cruel reality of adulthood?

The new Amazon Prime sci-fi series, Paper Girls, tackles those questions in the midst of a war for time itself. Four girls who desperately want to return to the year of 1988 find themselves coming face to face with the surprising and disappointing realities of adulthood.

Paper Girls is based on the wildly popular comic book series by famed comic book writer, Brian K. Vaughn, and artist, Cliff Chang. The series follows four young girls who find themselves at the epicenter of a war between feuding factions of time-travelers. As the girls bounce back and forth between the past and the future, trying their best to avoid execution for traveling outside of their timeline, they encounter startling revelations about their own futures, deal with interpersonal  and familial drama, and try to avoid changing the past or future for the worse. The series ran for 30 issues and various collected editions have been produced.

It was announced in 2019 that Legendary TV and Plan B, in conjunction with Amazon Studios had won the adaptation rights in a fierce bidding war. A year later, it was announced the Amazon had ordered the project to series. 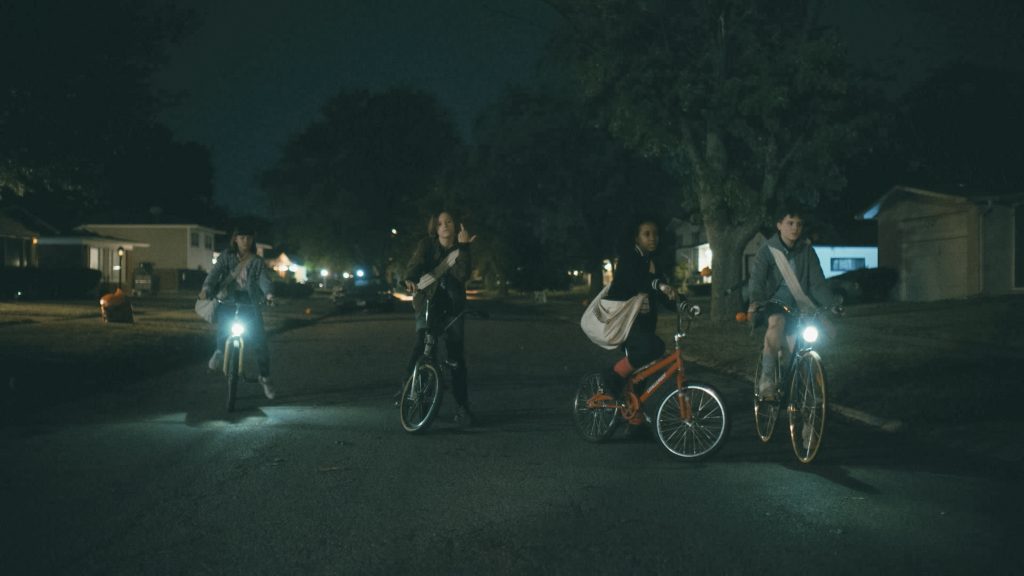 Season 1 loosely adapts the first two volumes of the comic book series. Like the comic, the series opens on the day after Halloween 1988. This day is known in the newspaper delivery business as Hell Day due to the various miscreants still running around in their Halloween costumes and causing trouble in the wee hours of the morning. Our titular heroines: Erin, Tiffany, Mac, and KJ decide it’s in their best interest to stick together to ensure that each of them completes their respective route.

A chance encounter with a teen who turns out to be a time traveler results in the girls being transported a couple of decades into the future. While there, the girls run into Adult Erin (Ali Wong) who is just as perplexed as they are, but does her best to assist them with getting back to their timeline. Giant robots, dinosaurs, and deadly futuristic technology follow as the girls try to make it back home.

Although it sounds a bit ridiculous, it works. The show is a smorgasbord of science fiction concepts that are throw into the kitchen sink along with more grounded, personal stories as each of the girls face startling, and sometimes harsh, realizations about their individual futures.

Our four leads are talented young actresses who  bring so much seriousness, heart, and realism to their roles.

Although the show features an ensemble cast, Riley Lai Nelet is our de facto lead in the first couple of episodes. Nelet plays Erin, the new girl in town who lives with her mother and younger sister. Her mother is sickly, reclusive, and struggles because of a language barrier. Because of this, Erin, at her young age, plays a major role in keeping her household running smoothly. Helping her mother is why she picks up a paper route to begin with. Nelet portrays the character as smart, strong, and vulnerable. Erin carries the weight of the world on her shoulders at the age of twelve-years-old, and does it proudly if it means her mother and sister are taken care of.

As it’s revealed in the trailer, Ali Wong portrays Adult Erin. For all the courage, tenacity, and strength younger Erin displays, Wong’s adult Erin is the opposite. She’s stressed, lonely, and tragically estranged from her younger sister, Missy. Watching Wong’s Erin become more courageous, and make sacrifices to protect the girls is such a satisfying arc. 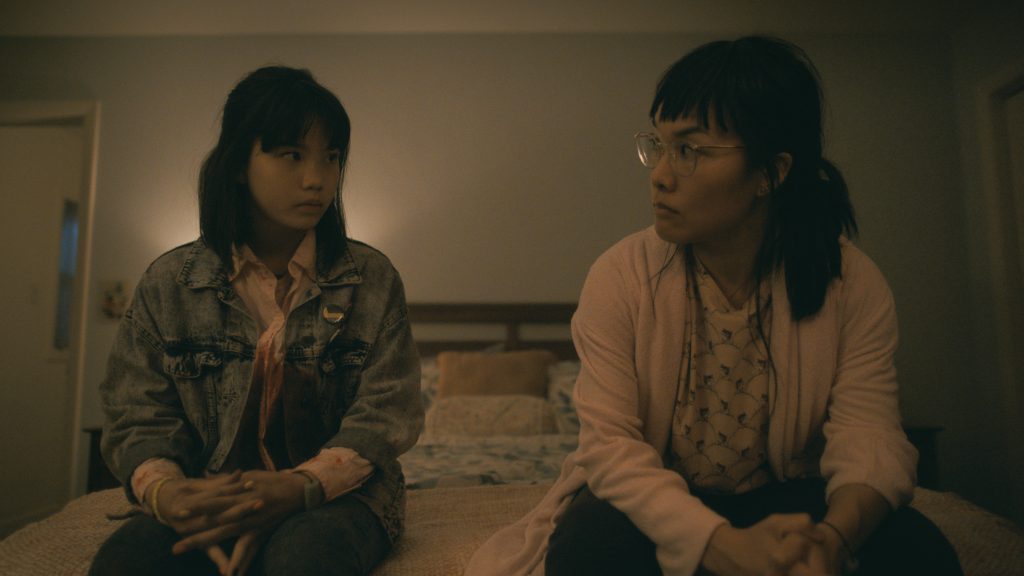 As someone who read the comic, I was the most interested in seeing how the television series would bring the character of Mac to life. Mac lives with her alcoholic father, step-mother, and rebellious older brother. She’s rough around the edges, very brash, and is constantly making offensive comments. Sofia Rosinsky’s portrayal retains those elements, but you can’t help but sympathize and even love the character because of the vulnerability Rosinsky brings to the role. Mac is tough, but she’s sensitive and has a kind heart underneath. She grows to care for and love her fellow paper girls even though she’d never say it out loud.

While I won’t say too much about her future self, her arc includes spending time with a family member (Cliff Chamberlain) while in the future and he is drastically different than what she expected. Her scenes with Chamberlain will endear her to the audience even more and softens Mac’s rough edges.

Finna Strazza as KJ is enjoyable to watch and has what I would argue is the most interesting arc when it comes to encountering her future self. I’ll refrain from spoiling it here, but she begins to ask very important questions about herself after witnessing a surprising encounter between her future self and a college friend. This gives the character a lot to unpack and causes her to explore feelings she’s been too afraid to acknowledge.

Strazza brings an amazing amount of strength to her portrayal of the character. Although she doesn’t seem like it as first, KJ is a fighter and is fiercely protective of her friends. Her scenes with Rosinsky prove to be some of the most engaging of the show. Both girls come from different socio-economic statuses, and it causes believable tension. 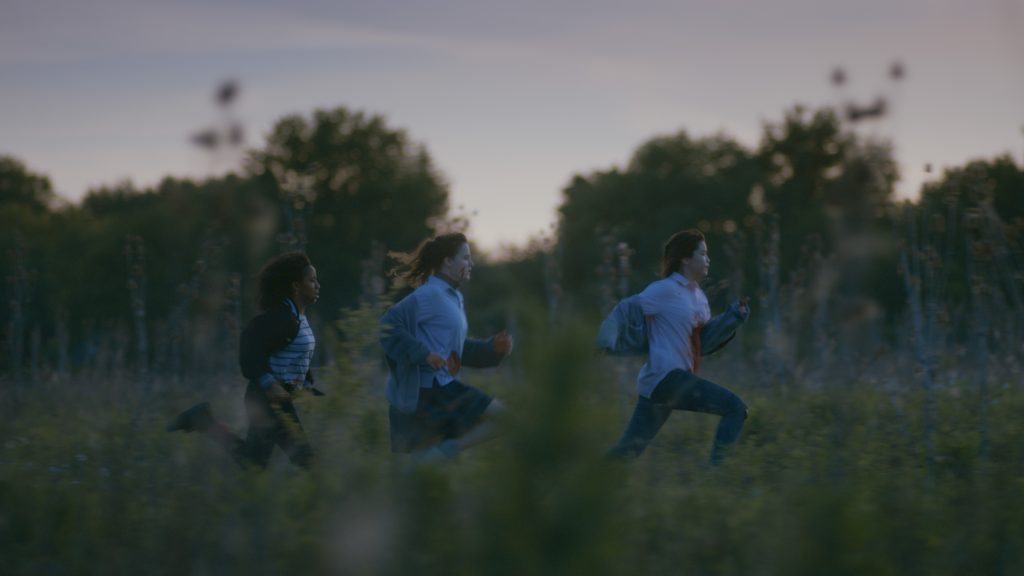 Saving the best for last, Camryn Jones portrayal of Tiffany Quilkin is my favorite of the season. Tiffany is the smartest person in the room in any given situation, and she knows it. Her intelligence and ability to adapt helps keep the girls alive. She has her vulnerabilities, but overall, is the most levelheaded. She’s the voice of reason and is constantly thinking ten steps ahead. I’ll stop short of revealing who Sekai Abeni plays, but a quick review of the cast will tell you who she is in relation to Jones’s character. Abeni does an excellent job as well.

There’s a tense scene between Jones and Abeni in the penultimate episode that, although it’s played straight, is actually pretty tragic. Tiffany realizes that her life, in many ways, is a lie and that she uses her intelligence and excessive planning for the future, to cover up her deep insecurities. Rarely do Black characters receive such nuance and depth in genre shows. We also get a tantalizing hint that Tiffany’s mother (Kellee Stewart) is more connected to the overall plot than anyone could have imagined.

Other standouts include: Adina Porter as the ruthless time-traveler huntress, Prioress; Nate Corddry as Larry, a kind, but slightly aloof operative trying to get the girl’s back to their original time; and Cliff Chamberlain as an ER doctor who receives as literal blast from the past.

Although it would be easy for one to simply describe Paper Girls as Stranger Things with a female cast, it would be insanely and insultingly reductive. At the heart of this sci-fi thriller, and all of its time-traveling hijinks, is an emotional story about what happens when the innocence and optimism of childhood collide with the bleak and depressing realities of adulthood.

Paper Girls is currently available to stream on Prime Video.