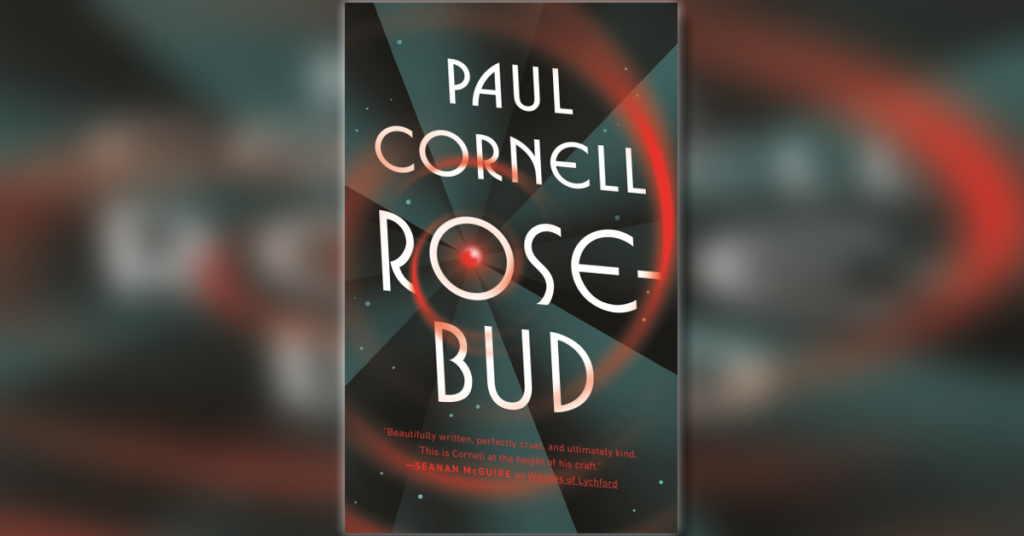 If you’re a fan of weird, creative, deeply original science fiction, then Paul Cornell’s new novella, Rosebud, is worth checking out. A quick, dense read, Rosebud is unlike anything I’ve read in ages. Featuring a group of immediately captivating characters and an absolutely mind-blowing plot, Rosebud isn’t always an easy read and it could benefit from being expanded into a full-length novel. But when it works, it works very well.

A Great Premise with Too Much Going On

Many years in the future, five sentient digital beings crew the Rosebud, a small survey ship searching for any material that might prove useful to the Company. On one survey, the crew discovers a strange, smooth black sphere. Upon investigating it, strange anomalies begin occurring. Feelings of deja vu, lost memories, and other such weirdness. But the allure of the sphere – and the potential praise that comes with discovering it – proves too much for the crew to resist. And so, the crew of the Rosebud sets out to explore this strange object and, in the process, their own pasts. Right off the bat, Rosebud has a great premise. And Cornell delivers a story worthy of that premise. The problem is that there’s just a bit too much all happening at once. Reading Rosebud feels like reading a full-length novel, except without any of the breathing room a full-length novel affords.

A Bit too Dense for the Page Count

Cornell crams an entire novel’s worth of plot into just over a hundred pages – and it frequently shows. It takes a little while for things to get going. But once the ball starts rolling, there’s little time for those quiet moments that help readers make sense of the plot. And I feel Rosebud really could’ve benefited from those moments. In these kinds of dense sci-fi stories, you always have to strike a balance between under-explaining and over-explaining things. And unfortunately, Rosebud tends to under-explain things – largely because there’s simply not enough time for Cornell to delve into the plot in any real detail. And sure, there’s fun to be had in stories that just ask you to go with the flow. But given how mind-bending Rosebud is, I think the story could’ve benefitted from a bit more explanation.

The prose doesn’t help much, either, unfortunately. Written from a present-tense, third-person point-of-view, it often hews closer to stream-of-consciousness style prose than I’d like. Everything’s a bit too rambly, sandwiching eye-glazing technobabble in between long passages of description and random thoughts. It ends up being a weird cross between traditional dense sci-fi prose and a more irreverent Hitchhiker’s Guide to the Galaxy style. I can see what Cornell was going for, to be sure. And many readers will probably adore how playful the prose is here. But for me, it was just a bit too unbalanced. And I’d have preferred something more straightforward to better help me follow the story.

The characters, on the other hand, are easily the best part of Rosebud. There’s a goth named Haunt, a science aristocrat named Diana, a balloon named Bob, a ball of hands named Huge, and a swarm of insects named Quin. And they’re all an absolute treat. Cornell makes them immediately engaging, with each character popping to life the moment they first appear. Their relationships feel nuanced and authentic. And their backstories feel lived-in. They’re the kind of ensemble you want to spend a lot of time with. And despite the story being primarily from Haunt’s perspective, each character feels fully developed and viscerally real.

Like the plot, the character arcs could’ve stood having more time devoted to them. You learn a lot about each character, but it happens fairly quickly and there’s not always enough time for the weight of that development to land as well as you’d like it to. But even so, it’s the character arcs that make Rosebud work as well as it does. Especially as the story progresses and delves deeper into these characters’ psyches. Cornell has a gift when it comes to character work – one that’s easily visible to anyone familiar with his Doctor Who work. And that gift is definitely on display once again here.

At the end of the day, Rosebud is an enjoyably mixed bag. It’s got great characters and a great story, both of which make for a fun read. But it’s hard not to feel like the story could’ve been even better with a longer page count and more room to breathe. But as it is, it’s a novella unlike any I’ve read in a long time. If you like original, creative, mind-bending science fiction, Rosebud is well worth a read.

Rosebud is available now in Paperback and eBook formats.

Disclaimer: A review copy of Rosebud was provided by Macmillan/Tor Books and NetGalley. All opinions in this review are the honest reactions of the author.