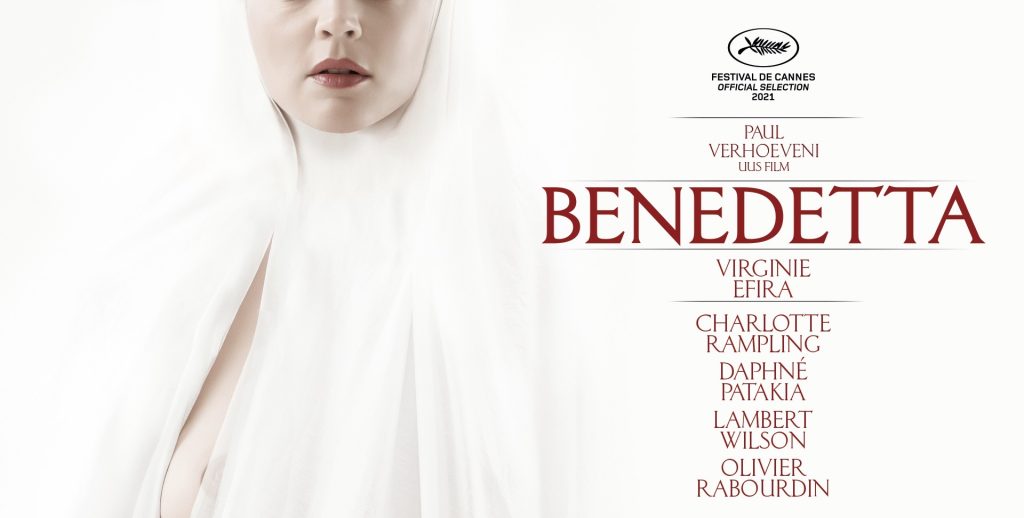 Narratively, Benedetta takes place primarily within the walls of the Theatine Convent of the Mother of God in 17-century Pescia, Italy. Enrolled at the convent by her wealthy parents when she is a child, Benedetta (Virginie Efira) grows into a devout sister. Even so, the Abbess, Sister Felicita (Charlotte Rampling) is always skeptical of her. That skepticism only grows when Bartolomea (Daphne Patakia), a young woman from the village joins the convent as a novice, an event that coincides with Benedetta experiencing vivid visions of Jesus speaking to her. Benedetta and Bartolomea grow close, leading to a romantic relationship at the same time that Benedetta’s visions convince many in and around the convent that she is destined for sainthood. In totality, Benedetta unspools a riveting tale of faith, power, and love that takes aim at every hypocrisy held dear within Catholicism.

The screenplay, which Verhoeven co-adapted with David Birke from a book by Judith C. Brown, is a commanding blend of genres and tones. It is at heart a medieval drama and the way the writers position Benedetta calls to mind any number of Joan of Arc films, something underscored when an antagonist relates Benedetta to Joan late in the runtime. There are echoes of The Passion of Joan of Arc (1928) and The Virgin Spring (1960) in the blending of interpersonal relationships and the co-confinements of 17-century Catholicism and patriarchal laws. The latter is what incorporates thriller elements, watching as Felicita maneuvers to ruin Benedetta. Such accomplishments would mark the film as exciting on their own, but Verhoeven and Birke also manage to recount the layered romance between Benedetta and Bartolomea with aplomb. In a story so full of religiosity and fury, their scenes together, until the former aspects intrude, are poignant and often quite funny. The script never minimizes their dynamic to shock value or cliché, reveling in the eroticism and joy of new romance.

Of course, Benedetta and Bartolomea would be simply words on the page without the marvelous performances from Efira and Patakia. Efira is the undeniable star, as riveting when she is enraptured by a stigmata-inducing vision of Jesus as the quieter moments when she speaks with the other nuns about issues of self and faith. While it is impossible to equal the raw power that Maria Falconetti wrought in the aforementioned The Passion of Joan of Arc, Efira seems to channel much of Falconetti’s wide-eyed and fervent performance. Her scenes with Patakia sing because of the actresses’ chemistry, making later instances when they are at odds all the more engrossing. Yet, it is their tender moments that give Benedetta a beating heart, such as when Bartolomea carves an old wooden Virgin Mary into a rough dildo. In a lesser film that would be a cheap laugh, but here it is a loaded moment of imagery suggesting the polarity of sex and religiosity in the church’s eyes, as well as a revelation of pleasure for the two women.

Tying all this together is Verhoeven and cinematographer Jeanne Lapoire’s eye for image-making. Benedetta’s visual language is one that contends with the expansiveness of religious imagery and the intimacy of romance. Verhoeven and Lapoire find ways to make the same room in the convent, dining hall, church, cells, appear either warm and enclosing or vast and domineering depending on the scene. They are always playing with light, deploying the 17-century reality of candles and fireplaces as a way to bathe nighttime scenes in a glinting orange and red, evocative of both the eroticism and Catholic damnation that flows through each scene. In the former of those tones, they also manage to stage gorgeous sex scenes that never fall into the exploitative and male-gaze imposing norm. There is copious nudity, yes, but so there is in sex, believe it or not. They are celebrations of the tenuous affection Benedetta and Bartolomea can locate within their repressive reality. Altogether, it would not surprise me if Verhoeven spent some time with Caravaggio before making this film, for the master’s flair for shadows and flesh is all over Benedetta.

Benedetta is a triumph of sensual filmmaking. I mean that in the broadest meaning of the word: Verhoeven calls upon the full scale of visual pleasures in making his film. There is not a dull scene or frame in this movie because the cast, crew, and post-production team have seamlessly woven together each element of a successful film. I count Benedetta as a favorite of 2021 because it pushes the cinematic form and audiences forward, requiring both to contend with a master filmmaker’s vision of faith, power, sex, and love.