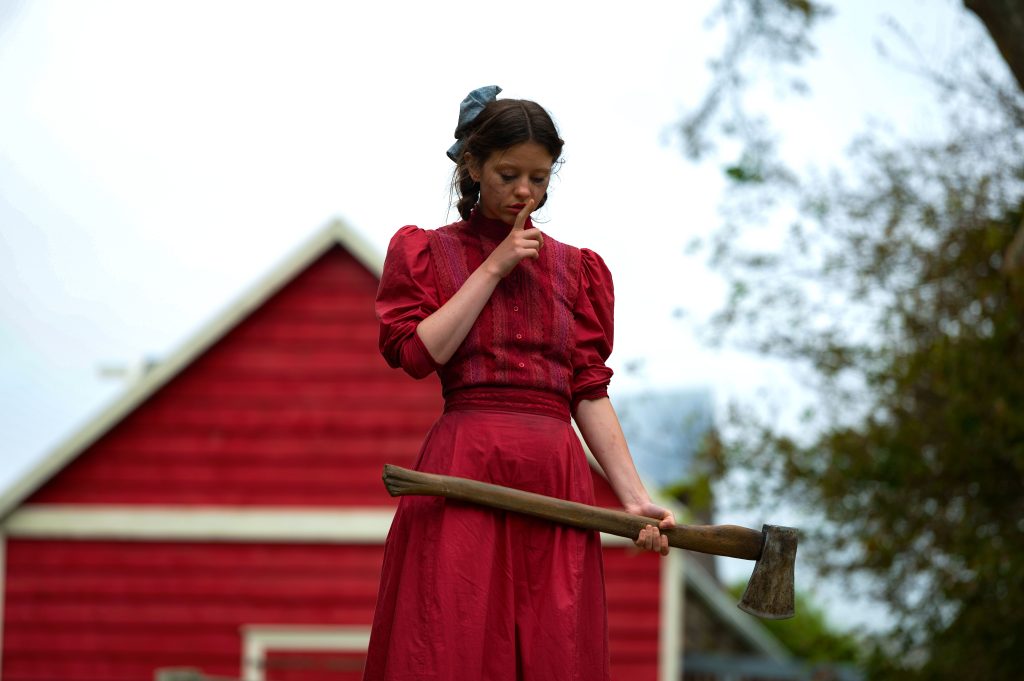 Synopsis: Filmmaker Ti West returns with another chapter from the twisted world of X, in this astonishing follow-up to the year’s most acclaimed horror film. Trapped on her family’s isolated farm, Pearl must tend to her ailing father under the bitter and overbearing watch of her devout mother. Lusting for a glamorous life like she’s seen in the movies, Pearl finds her ambitions, temptations, and repressions all colliding in this stunning, technicolor-inspired origin story of X’s iconic villain.

More often than not, if you want to achieve something, you must go after it. You can sit around and wait if you want to, but when you want something so bad that it’s all you think, dream, and talk about, you can’t let leave it to chance nor can you let anything get in your way. You may not be able to control where you’re born or who you are born to, however, you can control how hard you work to get what you want and how bad you want it. Your responsibilities come first, but when you have downtime, that’s time to grind and hone your skills and develop your talent. If you stay ready, you don’t have to get ready. Or in Pearl’s case, just keep something sharp laying around, you never know when you’ll need it.

“I can’t stay here any longer.”

” You can’t hide your true self forever, Pearl.”

Longing for compassion, a way out, and the warmth of love, there are many parallels that can be drawn between Pearl and X’s Maxine—both skillfully played by Mia Goth. While Maxine settles for the warmth of x-rated activities, Pearl ultimately opts for the comforting yet fleeting heat of spurting blood. However, it didn’t start off that way. Set in 1918 amid war and an influenza pandemic, life isn’t easy on Power Keg Farms. Money is tight, food is scarce, and Pearl’s hard-nosed stone-cold German mother is not one for unrealistic dreams or wasting time. Needless to say, that mindset does not bode well for a life experience-deprived and fame-hungry Pearl. With a lingering dark secret and insatiable urges, Pearl can’t take it anymore and her alligator friend is hungry. She’s determined for the world to know her name by any means necessary. A film such as this being told from the female perspective is a huge triumph, especially in the year that it takes place. In an era where women and minorities had no power, Pearl decides to take hers. Her actions can somewhat be interpreted as a trauma response to the conditions that she’s been subject to or she could simply be a psychopath. The lack of control of one’s life and the intense desire for a life opposite of your own can drive a person to do unthinkable things. While much of the commentary on various subjects may be unintentional such as gender roles, it’s a result of great filmmaking. Mia Goth is perfect as the titular character, the sweeping score is as loud and colorful as the film’s aesthetic, and the cinematography harkens back to the 1950s. Also, there’s just enough absurdity that lets you know not that the film doesn’t take itself too seriously. The kills a gloriously cinematic coupled with the transition choices are great. And let me not forget the final scene as the credits begin to roll that is worth a thousand words. I thoroughly enjoyed Pearl and can’t wait for the next chapter in the series. Its rewatchability is high. Oh, and be sure to stay for the post-credits scene for a teaser. 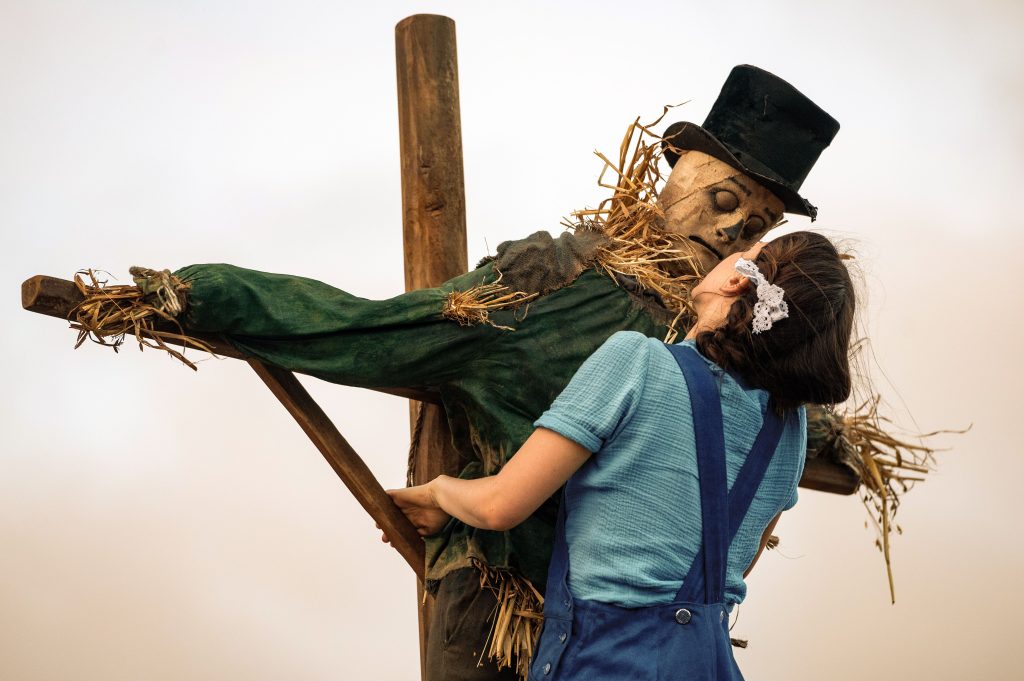 The pacing is crafted perfectly for the type of story that this film presents. While somewhat of a slow burn, it not only tells its own story, but it effortlessly and subtly connects with its sister film, X. It begins innocently with merely a whiff of crazy. The film then slowly builds until it collides with pockets of unhinged carnage leading to a deranged and macabre conclusion. What popped for me was the 3rd act monologue given by Pearl. The lengthy yet immaculate speech is as emotional and saddening as it is concerning and terrifying. It is amazing to witness and an impressive feat. 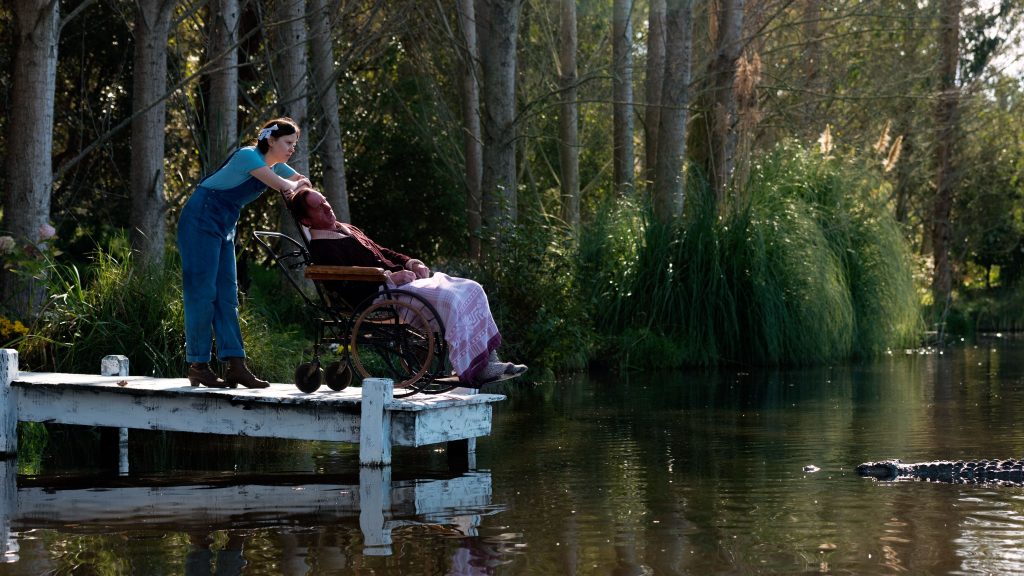 There’s no doubt about it, Mia Goth is a star. Her performance as the complex and murderous Pearl is nothing short of phenomenal. If you weren’t sold by her portrayal of old Pearl and Maxine in X, this film solidifies her power and ability to carry a film. While the supporting cast did an astonishing job, it is Goth that you come for, stay for, and can’t forget.

Pearl releases in theaters on September 16, 2022. Stay safe and enjoy. 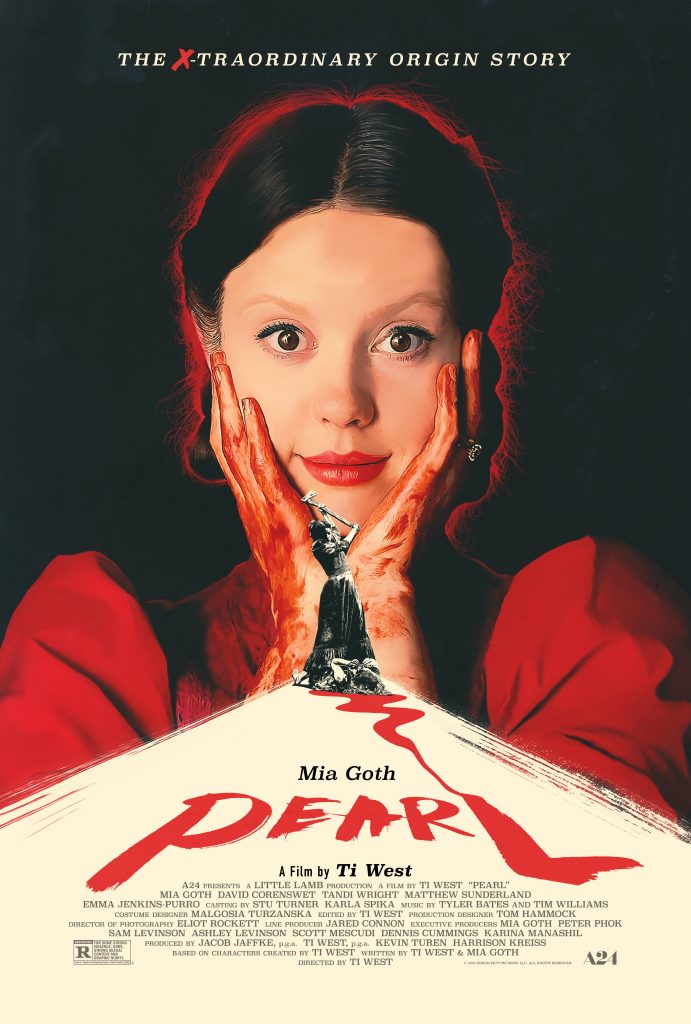 Directed by Ti West, Pearl is a vibrant and bloody transport into a deranged mind and trapped soul.

This website uses cookies to improve your experience while you navigate through the website. Out of these, the cookies that are categorized as necessary are stored on your browser as they are essential for the working of basic functionalities of the website. We also use third-party cookies that help us analyze and understand how you use this website. These cookies will be stored in your browser only with your consent. You also have the option to opt-out of these cookies. But opting out of some of these cookies may affect your browsing experience.
Necessary Always Enabled
Necessary cookies are absolutely essential for the website to function properly. This category only includes cookies that ensures basic functionalities and security features of the website. These cookies do not store any personal information.
Non-necessary
Any cookies that may not be particularly necessary for the website to function and is used specifically to collect user personal data via analytics, ads, other embedded contents are termed as non-necessary cookies. It is mandatory to procure user consent prior to running these cookies on your website.
SAVE & ACCEPT