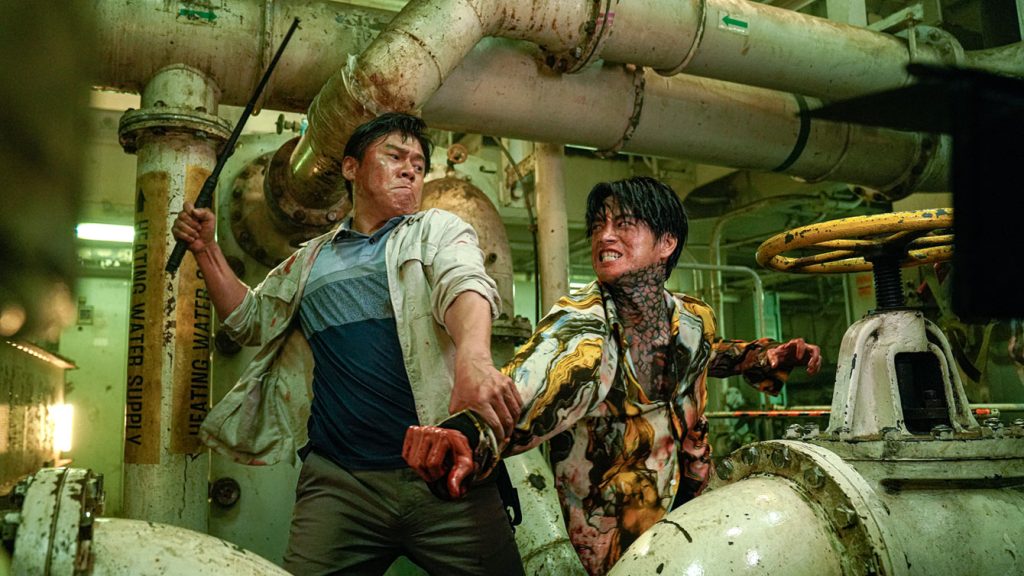 Plot Summary: While under heavily armed guard, the dangerous convicts aboard a cargo ship unite in a coordinated escape attempt that soon escalates into a bloody, all-out riot. But as the fugitives continue their brutal campaign of terror, they soon discover that not even the most vicious among them is safe from the horror they unknowingly unleashed from the darkness below deck.

There is something really special about action films from the 80’s and 90’s. With bullets flying, muscles rippling and cartoon level villains crafting the worlds doom, these popcorn flicks were aimed squarely for the masses. And damned if they weren’t afraid to admit it. While great action movies are still being produced today, they seem to be few and far between. The biggest issue with these modern genre offerings is the lack of sincerity. Filmmakers feel the need to have a certain level of smug self-awareness, for some godawful reason. Maybe they think its lame to craft something incredibly earnest, that has zero meta-jokes or humor to undercut its core concept? For genre purist, it is welcome news that Hongsun Kim’s Project Wolf Hunting certainly delivers the goods. It really harkens back to those glory days of action with an old school, Peter Jackson-level of splatter.

Kim’s film not only commits to his balls-to-the-wall action premise, he leans into it hard. Cannibalism, a mountain of fire-power and a body-count that would put any slasher to shame are just a few of the wicked offerings thrown our way. The end result is an orgy of blood and gore all wrapped up in a nihilistic bow. It is difficult to think of a recent movie that throws this much ultra-violence at the screen, and that includes Terrifier 2. Moreover, Kim brings a degree of sadism to the killings, almost to the point it feels slightly fetishized. The director wants to see every bit of blood, hear every broken bone and witness the final death twitches for good measure. The filmmakers have to be given a lot of credit for foregoing CGI blood and gore. What we are treated to is very well-done old school practical FX’s and it really looks incredible.

This is certainly a movie where spectacle overrides the plot. The narrative is at times disjointed and accomplishes the rare feat of feeling both underwritten and overly complicated at different points. However, this does not hinder one’s enjoyment, and there are a lot of fun surprises right around the ‘coroner.’ What starts off like a Con Air on a ship suddenly takes a hard sci-fi turn half way through making the already crazy movie even more gonzo. Normally, this kind of genre shift is jarring and often doesn’t work. Thankfully, it is worked into the plot in a way that feels totally organic. Plus, it helps when the entire movie feels like a hard-R anime therefore, you are more able to accept genre shifts.

One of the only major weaknesses of the film is the lack of substantial character development. One would be hard-pressed to really recall any characters outside of a few of the big-bads. At over-two-hours, the movie does feel bloated at times. Things do tend to get a bit repetitive and 20 minutes could have easily been trimmed for a tighter pace. The stars of the show are the action sequences themselves. Overall, the fight scenes are plentiful and extremely well staged and filmed. We don’t get a lot of the quick edits that oftentimes will mask poor fight choreography.

Project Wolf Hunting feels like it would fit perfectly in the fire power films of yesteryear. While the plot may be not that amazing, you’d be hard pressed to find a more kick ass action film in recent years.

Project Wolf Hunting is currently playing in select theaters courtesy of Well Go USA. The film will be available on Blu-Ray, DVD and Digital on February 14, 2023.

Project Wolf Hunting feels like it would fit perfectly in the fire power films of yesteryear. While the plot may be not that amazing, you’d be hard pressed to find a more kick ass action film in recent years.