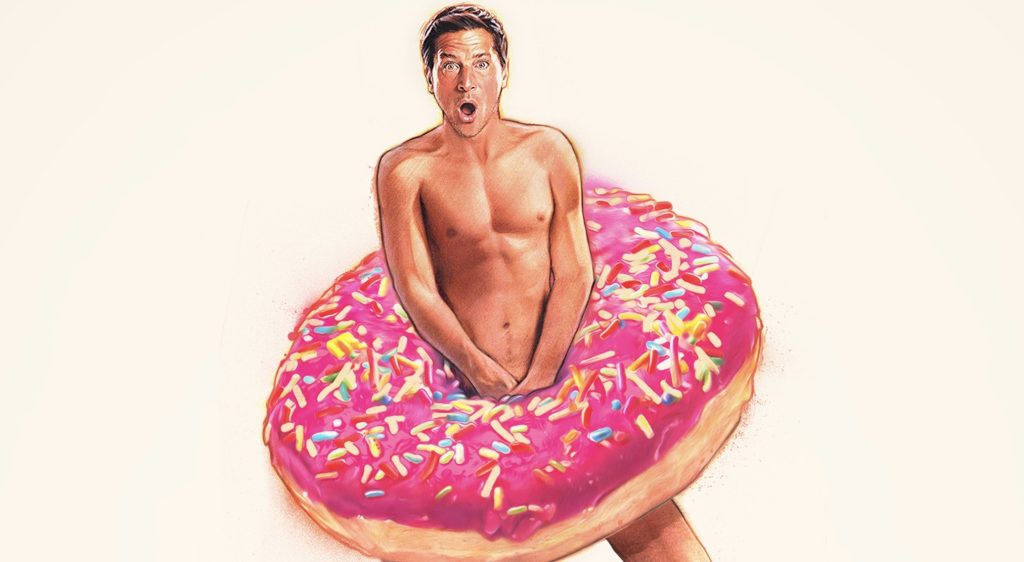 With Red Rocket (2021), writer-director Sean Baker maintains his recent streak of devastatingly honest slice-of-life indies. Four years after The Florida Project (2017) broke through to wider audiences than his also exceptional Tangerine (2015), Baker transmutes his Sunshine State focus onto small-town Texas City, Texas, and warped protagonist Mikey Saber (Simon Rex). Saber left Texas 17 years earlier for Los Angeles to pursue a career in porn. Washed-up and broke, he arrives on his estranged wife Lexi’s (Bree Elrod) doorstep begging for a place to stay under the guise that he’ll “help out.” Unable to secure any official job, Saber loops up with his former pot-dealing boss Leondria (Judy Hill). Before long though, Saber grows enamored with 17-year-old Strawberry (Suzanna Son) who works at the donut shop down the road. From there, we are the captive audience for Saber’s unending schemes and manipulations as he barrels towards ruin.

Baker’s screenplay, which he co-wrote with frequent collaborator Chris Bergoch, is a divinely unholy marriage between A Star is Born and Lolita. Saber’s entire personality is that of a narcissist who has flamed out but is still convinced of his own exceptional nature, grasping to regain former glory through any means necessary. He lies to and exploits Lexi’s affection for him, all the while grooming Strawberry to become a porn starlet that he can control and use as his ticket back to Los Angeles. Baker makes Saber’s aims plain from the jump. Saber contradicts stories and explanations in back-to-back scenes depending on whom he’s speaking to. His approach is to talk fast enough with slathered-on charm so that no one around him can catch up to his sordid dreams. Yet, even when Saber inevitably hits bottom once again, he never recognizes it is a result of his failings. Therefore, Baker and Bergoch’s tale is the tragedy of all who suffer around this beguiling black hole of personality that is Saber.

Directorially, Red Rocket is arguably Baker’s most accomplished work yet. He possesses an eye for how to turn run-down locations into a setting that somehow blends fantasy and brutal realism. The Florida Project accomplished this by juxtaposing the bright and multi-colored motels around Disney World with the extreme poverty within them. For Red Rocket, Baker modulates the approach to fit his new locale and protagonist. Achingly green fields that Saber bikes past are torn open by belching smokestacks. The over-saturated yellow of the donut shop exterior and all the decorated baked goods within slowly curdle into bilious neon as their association with Saber’s grooming of Strawberry intensifies. Within these settings, Baker pinpoints disarming framings, often arranging a scene so his camera sits in close-up on a character experiencing a secondary emotion in relation to the main sentiment happening out-of-focus in the background. There’s no better example than an early scene when Saber stands wrapped in a red towel, half-naked, and holding a cup of coffee in the kitchen. He’s talking at warp-speed about Los Angeles while Lexi sits at the table and tries to tune him out. It is disorienting, and also a stylistic underscoring of the constant disconnect that Saber embodies between emotion and humanity.

To this point, I’ve written quite a bit about Saber without discussing Simon Rex, and I must remedy that. As Saber, Rex delivers a performance for the ages, managing to make us care just enough for an objectively detestable human being. Rex flounces around with his tan and arresting smile, projecting a frenetic charisma. His physicality is captivating in that he is all manic expressions and motions. You could tell me he was strung on cocaine the whole time and I would believe you because he is simply that turbulent whether he is biking, running naked through the street, or telling a layered lie. On that last point, he also masters a variety of tones to express Saber’s multitude of approaches to conning those around him. There is the higher-pitched and pathetic way he speaks to Lexi and her mother Lil (Brenda Deiss) whenever he requires their pity. Or, the hollow deference and flattery weaponized to sweet talk Leondria. Most nauseating though is the faux-tenderness with which he spouts lie after lie to Strawberry, preying on her dreams of getting out of Texas City. We bear witness, in a similar fashion to the aforementioned Lolita, as a self-obsessed man devours a young girl’s innocence to make him feel more alive.

In totality, Red Rocket is equal parts observational drama about the trials and travails of small-town Texas, and a biting character study of the sickening ease with which con men worm themselves into our lives. On this latter point, it is no surprise that Baker incorporates grace notes of a certain disgraced former president spinning his cons about making “America great again” throughout the film. Red Rocket functions superbly without this final added layer of commentary, but the choice to infuse the film with a nod towards America’s recent history of being seduced by a twisted man who promised perverted dreams completely out of reach amplifies the impact. To say Saber is a stand-in for that defeated president is too simplistic. Instead, Saber’s story operates on a subtextual level about the danger of placing our trust and hopes in the hands of those who have only ever shown loyalty to self-interest. For all of this, Red Rocket is cinema of the highest order, a must-see film.