Based on the classic 1987 film by Paul Verhoeven, ROBOCOP: THE SERIES stars Richard Eden (Shootfighter: Fight to the Death) as the titular cyborg.

For thoughts on RoboCop: The Series, please check out our discussion on The Video Attic:

RoboCop: The Series comes to Blu-Ray with a 1080p transfer that unfortunately stands as one of the poorest efforts we have seen on the format. While we understand that this is a mostly forgotten series that was never going to be given the A-list treatment, there are some core issues that could have been avoided that would have made a world of difference.

The biggest issue we have with this release is the terrible decision to present this “newly remastered” series in the wrong original aspect ratio. The series was composed for a 4×3 aspect ratio, and this release is presented in 16×9 to “fill” widescreen TVs. This results in tops of heads being chopped off and some text nearly being compromised. While some shows like The Wire or Sex and the City have taken a similar approach upon being remastered in HD, there was at least much more care taken to ensure the composition of the series was considered to create a pleasing new version of the show. The OAR should always be maintained, but if it is not it it at least needs to be reframed with some care. RoboCop just zooms in with reckless abandon, and it is hard to watch.

Outside of the aspect ratio debacle, the series generally looks like an upscaled DVD. The colors in the series are a bit lifeless with barely any hues in the production design or even nature making a huge impression. Fine detail is likewise nearly nonexistent with very little in the way of depth to the image. The picture devolves into undefined murkiness during the shadowy moments. Admittedly, there is not much in the way of film damage, so the base film elements seem to be in pretty decent shape. Even if the release would not have been crisp and perfect, this image would have been satisfactory if we just could have gotten the show in its original aspect ratio. We are not unreasonable when it comes to how a syndicated ‘90s television show should look on Blu-Ray, and we would have felt grateful to just have a decent enough copy on physical media. Unfortunately, the compromises made to the artistic integrity render this a massive misfire. 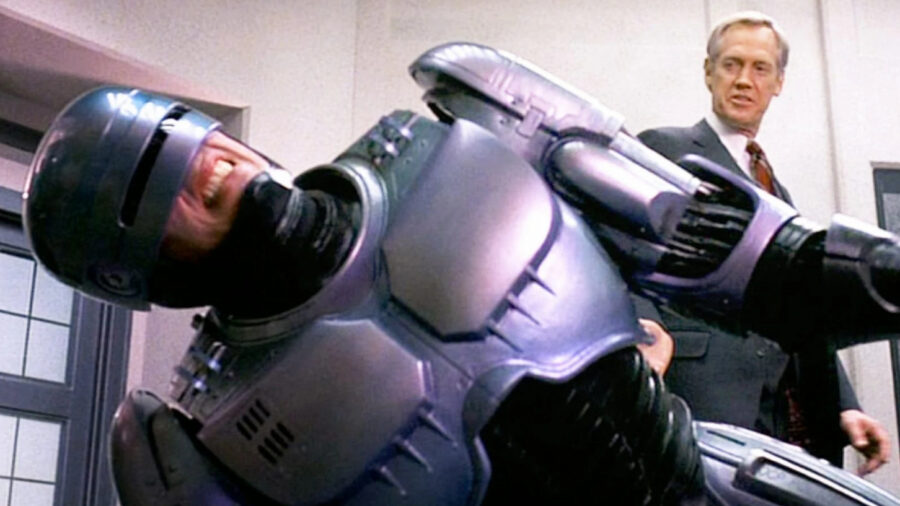 While the video may not be so hot, the series does at least come to Blu-Ray with a commendable LPCM 2.0 audio track. The environmental sounds are well positioned within the mix and provide an exciting texture for the story. The low end projects some amount of power during more spirited moments of attacks and confrontations. The dialogue and sound effects are appropriately balanced with the score where nothing gets muddled in the mix. The music occasionally presents some symptoms of age, but for the most part it maintains a nice fidelity. This track is effective enough and will be appreciated by fans who pick up this set. There are no subtitles provided. RoboCop: The Series is a much different beast than the classic Paul Verhoeven film and should be judged as such. You will not be witnessing anything in the way of gore or over-the-top violence; this is a show intended for general audiences with a RoboCop that disarms the bad guys instead of literally shooting the arms off of them. Yet, it works as a semi-cheesy sci-fi procedural with over-the-top bad guys and clear moral lessons. You retain some of the satire from the movie with the newscasts and commercials which likewise aid in shaping its unique identity. The series is far from perfect, but it is fun when you are looking for something to scratch that genre itch. Liberation Hall has released a Blu-Ray featuring a seriously flawed A/V presentation and some special features. If you are forgiving enough to accept a compromised version of the show, you can at least own this television guilty pleasure on physical media.

RoboCop: The Series is currently available to purchase on Blu-ray and DVD.

Disclaimer: Liberation Hall has supplied a copy of this set free of charge for review purposes. All opinions in this review are the honest reactions of the author.