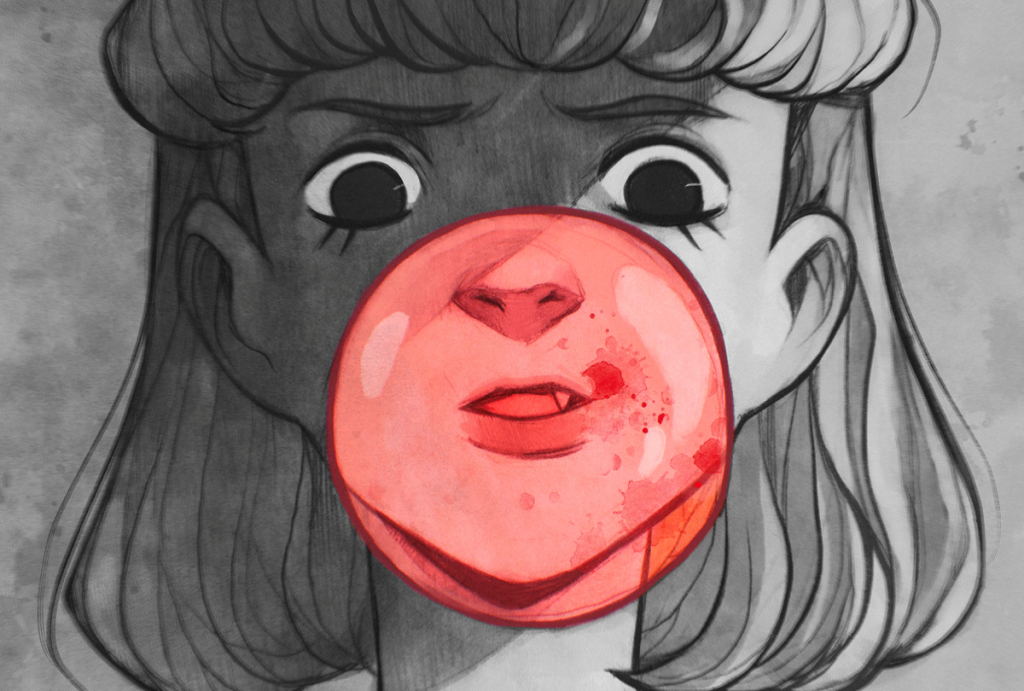 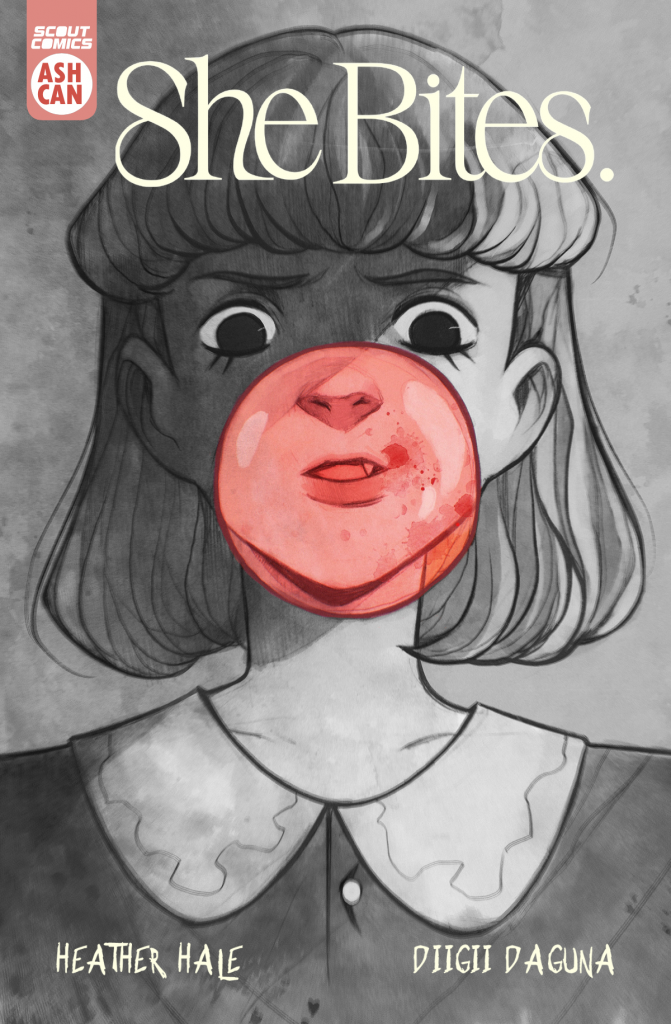 With the start of the New York Comic Con, and the opportunity to finally get together with like minded fans, leave it to Scout Comics to find a way to promote a book in a cool and unusual way. But don’t let me try to explain it, when this this press release will lay it down for you.

NEW YORK COMIC-CON – There are blood-stained fliers posted somewhere on the streets of New York advertising a babysitting job for a very unique child. If fans find a flyer and answer the call – a job offer to babysit a 134-year-old vampire trapped in a 9-year-old’s body — they will be rewarded with a super-secret limited-edition variant cover of the premiere issue of the comic SHE BITES written by Heather Hale for free.

SHE BITES (formerly known as VAMPIRE’S BABYSITTER) was the Grand Prize Winner of the 2020 Script2Comic Contest, a unique screenplay contest where the winning scripts get made into comics series.  Scout Comics, one of the sponsors of the contest, is publishing SHE BITES which will release in February of 2022 through Lunar, Diamond and Simon & Schuster.  The book is written and lettered by creator Heather Hale, with art by Diigii Daguna.

It’s 1997 in Pittsburgh, Pennsylvania. A 134-year-old vampire,  in the body of a 9-year-old girl, is squatting in a run-down basement apartment. She is Elsie Baker, and she can’t even buy her own cigarettes because adults won’t take her seriously. In order to move among the normal undetected, she must find a willing human to act as her babysitter.

Enter Brenda Zelinski, a depressed 18-year-old who was rejected from her dream college and is stuck in her hometown with no plans and no hope. All Brenda wants is a quick pay-day so she can afford to fly to Scotland and jump off a cliff to end her miserable life in grand fashion.

Together, these two lost souls form an unlikely friendship around their mutual disdain for literally everyone else. 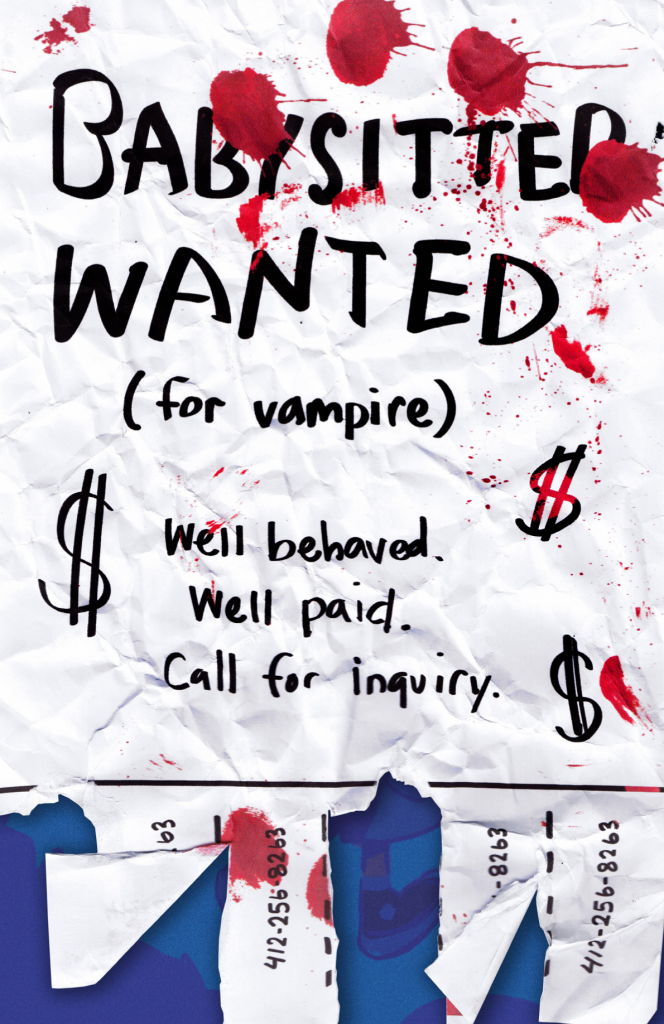 Blood-stained ‘babysitter wanted’ advertisements will be posted around Javits center and near iconic local comic shops St. Mark’s in Brooklyn and Forbidden Planet near Union Square. Scavenger hunters can find these posters, pull the tab and call the number. If they listen to the message and then bring the tab to the SCOUT comics Booth at NYCC (booth #2637 ) OR St. Marks Comics/Forbidden Planet, they can receive a limited edition ash can featuring the first appearance of the characters for FREE. Interested applicants can follow @shebitescomic on Instagram, Twitter, and Facebook for additional clues about where flyers can be found. A limited number of the secret ‘ash can’ will also be on sale at during the show at the Scout Comics Booth #2637 for fans not quite up for hunting down the flyer.

Heather Hale will be signing at the Scout Comics Booth #2637 at New York Comic-Con on Thursday, October 7th @ 2PM, Saturday October 9th@ 5 PM and Sunday October 10th @ 4 PM. She will also be appearing at St. Mark’s Comics @ 51 35th St in Brooklyn at 8 PM on Saturday October 9th  with other Scout creators including James Haick (The Mall, Solar Flare), David Byrne (Stake) and Don Handfield (Unikorn, The Mall, The Source).

The SCRIPT2COMIC Contest was created by leading film, television and comic industry professionals to provide a platform for writers to see their vision made real. Winners have a chance to see their screenplay, teleplay, short script, comic script or short story brought to life as a comic book series or graphic novel and published by one of the top indie publishers in comics. Our finalist judging panel is comprised of top producers, managers, writers, showrunners and comic industry professionals who have decades of experience, awards, and are associated with billions of dollars in box office.

After ending its 36 year run in NYC’s East Village, legendary retailer St.Mark’s Comics re-opened in Brooklyn this summer. Old and new customers are finding the extensive stock and exemplary service that made the shop famous, in a spacious location in Sunset Park’s Industry City.

Forbidden Planet has been one of the world’s most acclaimed sellers of comics, graphic novels, toys and other collectibles since 1981! Visit us at 832 Broadway (between 13th and 12th St) New York, NY 10003.