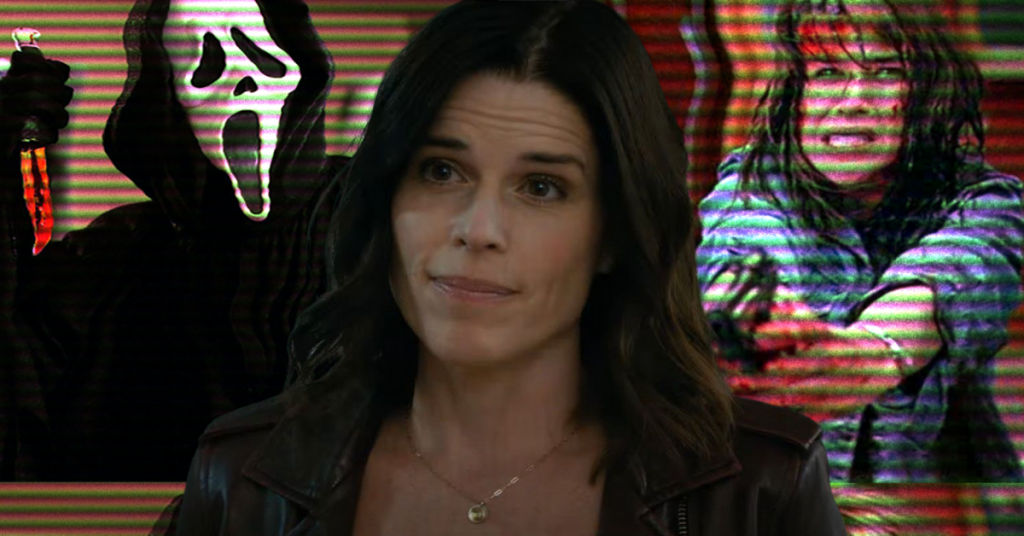 Depending on whom you ask, the slasher sub-genre of horror movies may have started at any of various points. There is a general agreement that 1960 was the nexus, but was it Psycho or the oft-forgotten yet just as seminal Peeping Tom that jump-started the craze? Even then, is it more suitable to point to 1974 when Black Christmas and Texas Chainsaw Massacre calcified the obsession? Or even four years later when Halloween blessed us with Michael Myers? For the curious, my money goes to Peeping Tom, but the fact is no matter your stance that by the 1980s slashers were the horror film du jour. Of the filmmakers who shaped the genre that decade, Wes Craven reigns supreme. The progenitor of Freddy Kreuger, Craven grasped the slasher baton and took off. Yet, by 1996 Craven emerged ready to deconstruct the very empire he helped create. Enter Scream, and Sidney Prescott.

Scream, like most great genre satires, managed to work both as a commentary on slashers and an example of the sub-genre par excellence. Craven sculpts Woodsboro, California into the perfect stand-in suburbia for every gauche neighborhood terrorized by masked killers in the preceding two decades. His teenage cast quotes and references all the touchpoint horror movies Craven’s filmmaking nods to, yet it never distracts from the spine-tingling originality around it. The opening sequence remains nightmarish and gleeful. But arguably the most lasting of Scream’s contributions to the horror canon is Neve Campbell’s protagonist Sidney Prescott. Once you recover from the opening Drew Barrymore movie star fake-out, Kevin Williamson’s script settles into a rhythm that treats the narrative as much as a character study of this grief-stricken young woman as a slasher unfolding around her. Simply put, Scream is built on the premise of one teenage girl’s journey to recovery.

We meet Sidney just under a year after her mother Maureen was raped and murdered. The emotional wounds are raw, hardly helped by journalist Gale Weathers’ (Courteney Cox) continued hounding of Sidney. Weathers quite literally wrote the book on Maureen’s death. It’s easy to make the connection between Sidney’s public reckoning with her private trauma and the media circus that emerged from the OJ Simpson trial hardly a year before Scream’s release. Sidney is a heroine of the moment. She just wants to heal without the town and country salivating over her pain. Craven weaponizes this in killers Stu (Matthew Lillard) and Billy (Skeet Ulrich), two young men who transmute their misogyny and toxicity into a murderous rage. The often murky subtext of slashers is therefore clarified here: Scream directly addresses the fact that stories about crazed men with knives are inherently about savage patriarchy.

Sidney’s arc is therefore concerned with her locating and cultivating agency. This is as much in regards to her internal landscape as her survival quest. The marriage of these components results in a final girl that eschews tired tropes fixated on purity and shallow characterizations. Sidney has a boyfriend who she is actively working through trauma to be sexual with, friends with who she jokes around and goes to parties, and a multitude of quiet moments where Neve Campbell is allowed to linger in Sidney’s agony. And yet, Sidney is more than her grief. If the first act of Scream fixates on methodically deepening our understanding of Sidney’s past, the second act realistically explores how a teenager would respond if that past was triggered by brutal murders, and then culminates in a third act where she faces that past and makes the choice to fight against it.

As a result of this careful exploration, Sidney embodies the meaningful aspects of scream queens prior while originating a character with richness beyond any archetype. Sidney has Jess Bradford’s drive, Laurie Strode’s raw survivalism, Sally Hardesty’s charisma, and yet transcends all those comparisons. All this makes Sidney a fitting heroine for her Third-wave feminist. A post-modern protagonist outfitted with an aching soul and wicked aim with a pistol. She is defined not by her circumstances or genre. Rather by the individualized growth that she undertakes to move beyond incapacitation by her mother’s death into actualization. By Scream’s end, Sidney Prescott is synonymous with an empathetic badass.

Sidney in the Sequels

Putting aside Scream (2022) for a moment to focus on previous sequels, it is clear that the foundation of Sidney’s character and arc is what makes Scream 2 (1997), Scream 3 (2000), and Scream 4 (2011) so effective. Each continues Craven and co.’s critique of the genre, but remain centered on the living soul of the franchise; Sidney Prescott. Taken in totality, the three sequels amount to a thorough examination of Sidney’s maturation and relationship to trauma. She tries to move on with her life in a normal way by going to college in Scream 2, but death finds her there all the same. Normality axed (or slashed for that matter), she retreats from friends, family, and public scrutiny in Scream 3, applying her experience to try and help others by working for a California women’s hotline. Yet, even when she thinks she’s out, the darkness pulls her back in because she cannot fathom isolating herself when friends may be in danger.

This arc makes Scream 4 all the more fascinating in that it is the first to, in some ways, push Sidney to supporting character while focusing on Gale, Dewey (David Arquette), and a younger generation of Woodsboro teens. Even so, Sidney’s ongoing arc towards healing finds her the bestselling author of a self-help book about her experiences. While Scream 4 could play this as a commentary on Sidney ‘selling out,’ her dismissal of cash and fame-hungry publicist Rebecca (Alison Brie) underscores Sidney’s profound sense of duty; she chooses to revisit ultimate misery in hope that her story might rescue someone from suffering. Sidney’s constant anchor in the series, no matter who dons the Ghostface mask, is that she loves intensely. Unwavering in the face of the world constantly revealing its penchant for brutality. She honors the memories of her murdered friends alongside Dewey and Gale as they fight to save lives.

And so, now for the first time without Craven at the helm, Sidney is back on our screens. Five movies and decades on, Neve Campbell continues to own every frame she fills as her most unforgettable character. As horror franchises lose the plot right and left, doing a disservice to their iconic leads, Scream once again delivers astounding quality. There is much to love in this new movie, but it is difficult to deny that what makes it truly sing is that it understands why Scream perseveres; Sidney is the ultimate final girl and franchise horror icon because her arc is unrivaled in its emotional maturation and narrative consistency. While comparable franchises ret-con decades of entries with new sequels or reboots to entirely ignore their history, Scream holds tight to its essential nature. Yes, there are new teens, and Gale and Dewey are around too. But the franchise would not exist without Sidney’s story as the original centerpiece. Even a sequel over 25 years later cannot deny her power.

The fact of the matter is that by nearly any measure, Sidney Prescott is the most consistently moving, continuously developed, and unendingly badass character in modern horror. No matter my love for Ellen Ripley, Laurie Strode, or the Warrens, there is simply no logical argument for suggesting that any other character or figure in a modern horror franchise contains within them the same level of characterization and unwavering humanity as Sidney. Yes, Scream is about Ghostface and the horrors of madmen and women with knives, but we only give a shit about that because they are in opposition to Sidney and those she cares about. And what do we learn again and again about anyone who comes after her? Well, Sidney said it best in Scream 4: “don’t fuck with the original.”