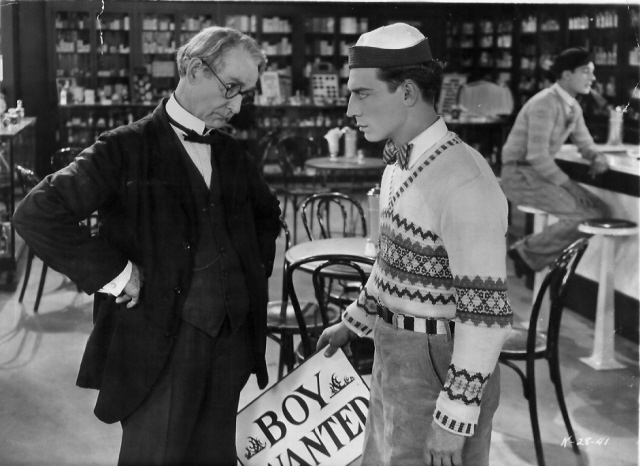 The Keaton Project was launched in 2015 by Cineteca di Bologna and the Cohen Film Collection to restore all of the films made by Buster Keaton between 1920 and 1928. This fourth volume continues this excellent series of releases that debuted in 2019 with two hilarious classics from “The Great Stone Face.” Get our assessment below! 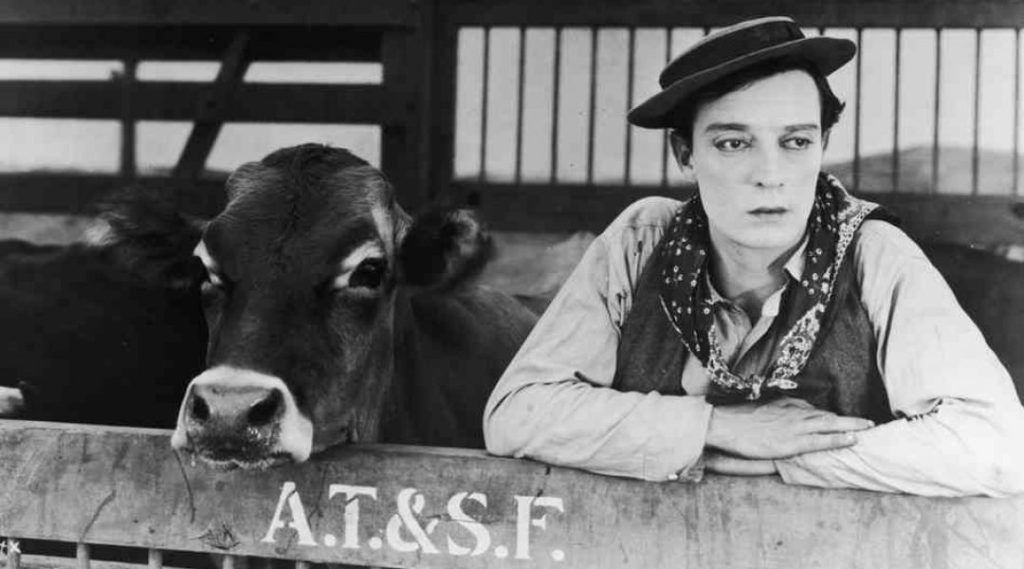 Heeding the expansionist call of Horace Greeley, an idealistic young man (though aptly named “Friendless”) hops a freight train westward to meet his destiny, first in a teeming metropolis—where he is roundly trampled by rush-hour foot traffic—then into the ranch lands of Arizona. His attempts at bronco busting, cattle wrangling, and even dairy farming all end in hilarious failure, but when a trainload of steer are unleashed on the streets of Los Angeles, “Friendless” decides to undertake an unorthodox, single-handed round-up.

While I would never be mistaken for an authority figure on silent film, this highlight of the collection stands as one of the most delightful films I have seen in some time – silent or otherwise. Keaton sets the tone of the picture right away as his “Friendless” character wheels all of his Earthly possessions into the local pawn shop to heed the call of exploring new lands. The visual gag of Keaton pulling his bed by a rope cleanly through the open doors of the shop is charming. Before he actually heads west, he hilariously tries his luck in the bustling New York City streets where he is not up to their fast-paced lifestyle. His time hopping trains between locations are some of the most deliberately broad of the movie with wooden barrels testing his penchant for pratfalls. It is when he gets to intended destination that the movie shifts into a different gear for Keaton, a more gentle gear that delivers a genuine love story the likes of which will melt the heart of even the most hardened individuals. It’s a lady with beautiful brown eyes who has been neglected – it’s the sweetest looking cow that you have ever seen.

Yes, the central love story of the film is between Keaton and a cow. The pure love that comes from forming an empathetic connection with another living thing when you feel alone in the world. Keaton makes an awful ranch hand, but by goodness he is going to make sure his new friend is protected from harm. The gags are often simple in this tale, but Keaton is a master of wringing out every ounce of hilarity from his movements. From his efforts to try to ride a horse to his near-death experience trying to wrangle cattle, every moment builds on the last. You get invested in the smallest things, such as Keaton’s recurring tardiness to meals that pays off in a really satisfying way. There is also a human female who pops up as a potential love interest for Friendless, but this love story only has room for ole Brown Eyes. The finale for this one is pretty epic given the relatively small scale of the majority of the film. The only damper that is put on the fun is a random, minor use of blackface that is neither used for malicious or comic intent. It’s a true shame it had to be included in such a heartwarming film, no matter how minor it is. Outside of this, Go West is a truly stellar silent film that mixes humor and heart in a completely satisfying manner. 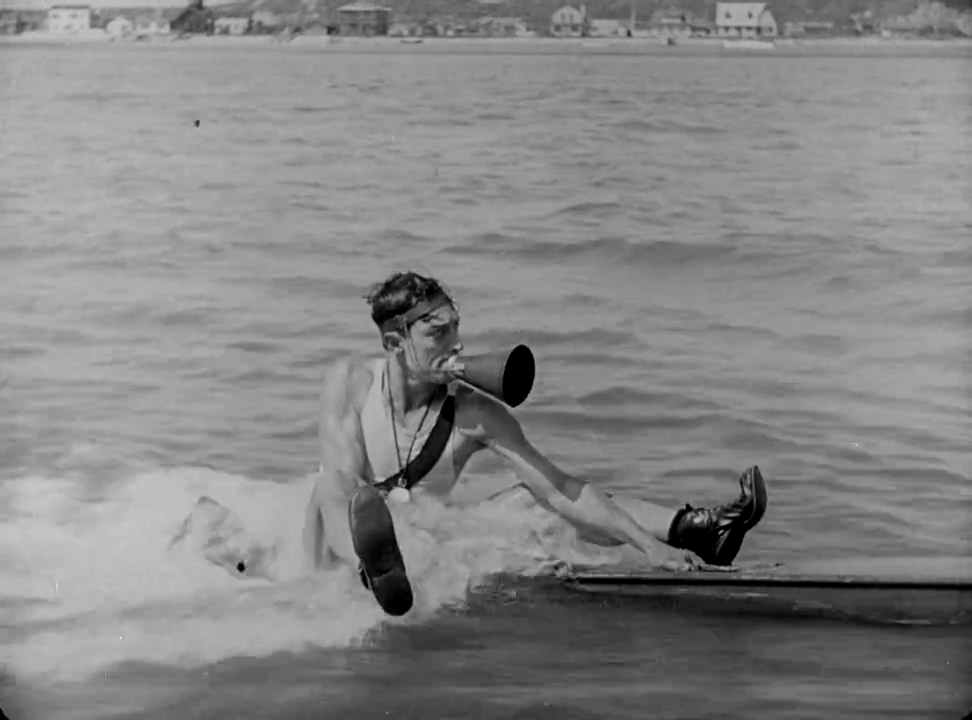 Keaton’s ode to varsity life demonstrates the performer’s trademark brand of visual comedy as well as his remarkable agility. He stars as Ronald, a small-town, academically-inclined freshman who applies his wiry physique to a series of sports, in order to impress a fellow student (Anne Cornwall). He seems destined for failure, but when Mary is accosted by an overzealous rival (Harold Goodwin), Ronald discovers within himself an untapped wellspring of athleticism.

While Go West may be the jewel of this collection, College offers more than its fair share of hilarious sequences that make this a worthwhile effort from Keaton. The opening high school graduation scene brings a different rhythm to the film compared to what it serves up once Ronald (Keaton) gets into his college hijinks. While cementing his personality as a bookworm who is derisive of athletics, Keaton employs some subtle gags that are among my favorite of the feature. Ronald must give a speech during graduation after getting caught in a rainstorm in his new suit. While he sways precariously back and forth on stage with the faculty in lock-step, his suit shrinks at a ridiculously quick rate in a way that really tickled me. This is a great appetizer to the unshackled hilarity of his collegiate times that he embarks on to prove that he is not a wimp in the eyes of a special lady. Once you see what Ronald ends up going through, it will be clear that it is always better not to try to change yourself to impress someone. A little life lesson from Buster Keaton!

Following the table setting, the gags come fast and furious once Ronald actually gets to college. Most of the sequences are athletic in nature, but there is a solid bit of business in the local soda shop where chaos ensues when Ronald tries to make a milkshake like a pro. Even when you can see the moves coming, it is drop dead funny. Speaking of which, Keaton gets a lot of mileage from his inexperience with sports – I like to think of this portion of the feature as an exaggerated look at how I would fare in these situations. His attempt at baseball starts with him suiting up with the catcher’s gear to play third base and only devolves more from there. Track and field provides ample opportunity to see Keaton flounder about at multiple events. Can Ronald clear the hurdles? Of course not. Do you want to be near when he is trying his hand at discus throwing? Absolutely not. Should you even ask about pole vaulting? Don’t make me laugh. Ronald is not a born athlete, but he does prove himself capable when he needs to save the damsel from a macho jerk. The film is less consistent than Go West, but it has a ton of great physical gags that make it an enjoyable time.

As I did with Go West, I would be remiss if I did not point out the way more egregious employment of black face in College. Keaton himself dons black face to gain employment in one sequence that lasts about five minutes. Even if the sequence was not conceived with hate in its intention, this is a disgusting practice that tarnishes the enjoyment of this film to an extent. I would never advocate for censorship, but it deserves to be pointed out for those who do not want to stomach such material. 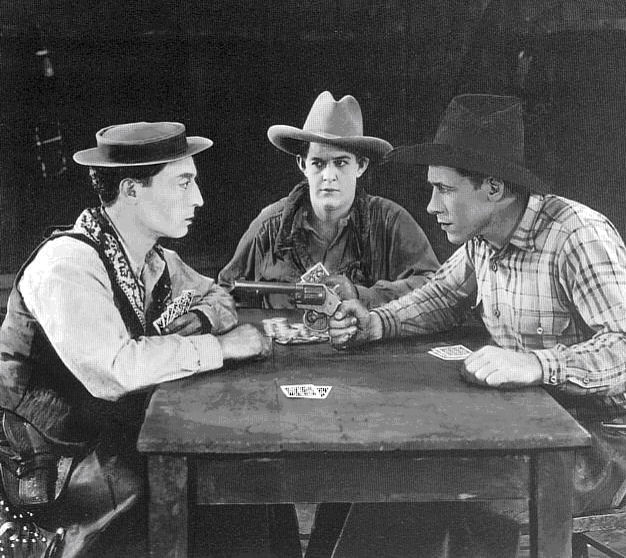 These two Buster Keaton comedies come to Blu-Ray newly restored courtesy of the Cohen Film Collection in an AVC encoded 1080p transfer in their original 1.33:1 aspect ratio. As noted before each feature, these new restorations were an extensive undertaking where multiple source elements were used such as the original camera negative, a first generation nitrate positive, a second generation safety dupe negative and a third generation safety positive. Many of the available elements were severely affected by chemical decay, so it’s a minor miracle these look as good as they do. They are nearing 100 years old, for Pete’s sake!

The restorations are really something to marvel at, as they take some really rough looking prints and cleans them up substantially. There are still minor nicks, and the occasional instance of more noticeable damage, but these films appear very natural and filmic. There is some noticeable softness to some of the shots that likely stems from the quality of the source material. The most consistently impressive of the two films is Go West, which is remarkably stable outside of some more egregious contrast fluctuations during a card game later in the film. Film grain is present without being too intrusive, which allows details not to be scrubbed away. Textures on clothing and within the production design are now way more apparent than ever before. The contrast in the black-and-white photography is mostly stellar. College comes off a bit fuzzier with a few noticeable issues of black crush. The upside is there is less apparent damage than Go West. Both films have their pluses and minuses, but the general opinion is they both look pretty magnificent for what they can be. The Cohen Film Collection should be applauded for giving us such a great presentation.

This Blu-Ray set presents these two films with DTS-HD 2.0 Master Audio tracks that sound pretty wonderful. Go West is graced with a new score from The Mont Alto Motion Picture Orchestra, while College is given a new one compiled by Rodney Sauer. As these are both silent films, the music is the only element to contend with in these tracks, and they both sound bright and lovely with no clipping or age related wear and tear. Classic film fans should be beyond pleased with the sound quality of these two films, as the new pieces seem to complement the visuals perfectly. 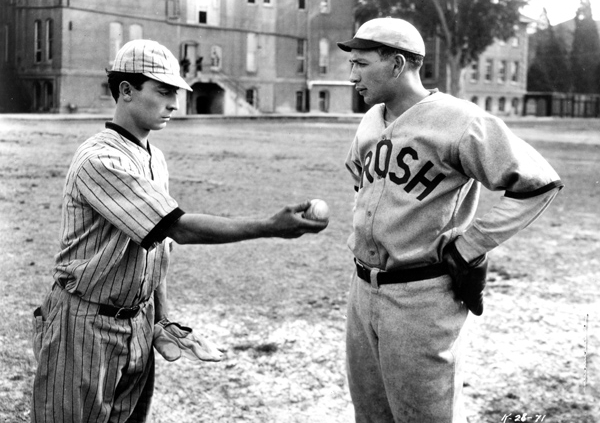 The Buster Keaton Collection: Volume 4 offers up two hilarious silent-era films that show the varied talents of one of the all-time great performers. There are some dated elements in the films that are highly objectionable, but overall these are brief moments in otherwise charming features. The Cohen Film Collection have done a truly wonderful job of restoring both of these films to the best versions of themselves on this new Blu-Ray that sports a stunning A/V quality and a couple of fun special features. If you are looking for an exciting entryway to the world of silent film, this is not a bad place to start. Highly Recommended

The Buster Keaton Collection: Volume 4 (Go West/College) is currently available to purchase on Blu-Ray and DVD.

Disclaimer: The Cohen Film Collection and Kino Lorber have supplied a copy of this disc free of charge for review purposes. All opinions in this review are the honest reactions of the author.