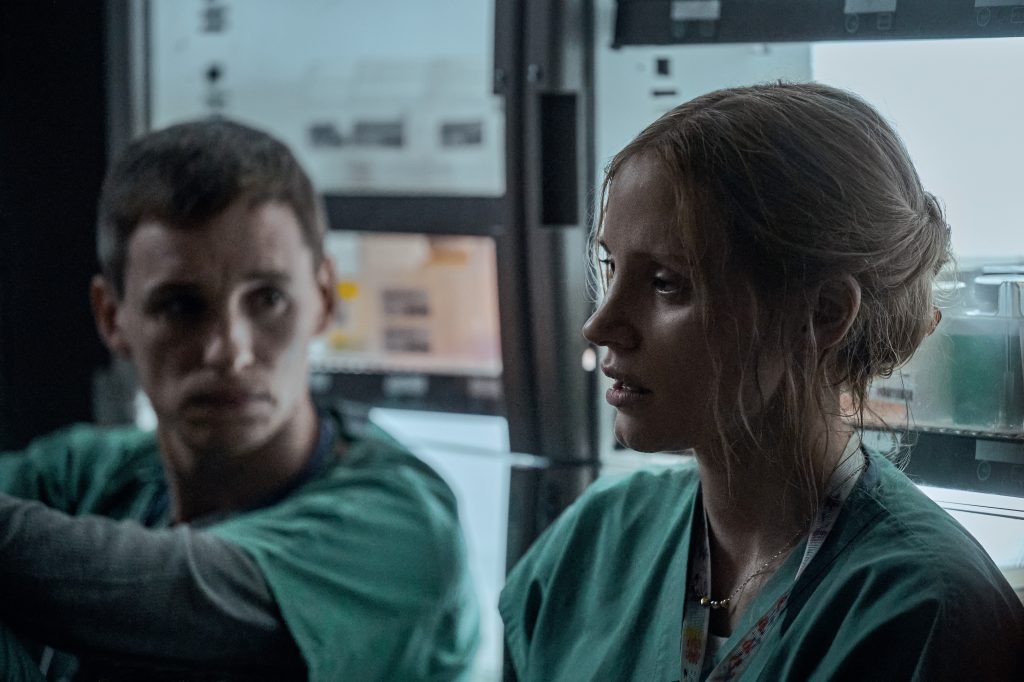 Having spent a significant amount of time in hospitals in the last two years, I can attest to the challenges of the American healthcare system. One of its greatest is its bureaucracy, where positive medical outcomes often go to die. I’m blessed enough for the complexities to be an irritant, making long-term healthcare frustrating but manageable. (Unfortunately, millions suffer worse than I do. Our society’s inability to ease that suffering is arguably our greatest collective failing.)

In the context of The Good Nurse, my experiences with hospital bureaucracy are a cakewalk. The film, based on the true-crime book of the same name by Charles Graeber, exposes the system’s more sinister shades. The Good Nurse follows the investigation into Charles Cullen (Eddie Redmayne), a male nurse rumored to be bouncing between hospitals and covertly murdering patients. His latest assignment is at Parkfield Hospital, working the ICU night shift with Amy Loughren (Jessica Chastain), a single mother with a heart condition that threatens to bankrupt and kill her. Overworked and overwhelmed, Amy accepts Charlie’s support and friendship, not realizing that a murderer is in her midst, befriending her two daughters and sharing her egg salad.

The Good Nurse is partly about how Charlie took advantage of Amy’s friendship to commit his crimes. Director Tobias Lindholm is equally interested in how his heinous behavior could continue unchecked for years across multiple hospitals. He answers that question through Danny Baldwin (Nnamdi Asomugha) and Tim Braun (Noah Emmerich), two detectives assigned to the death of one of Charlie and Amy’s patients seven weeks later. What they find are countless obstacles erected by administrators and litigators who are seemingly terrified to accept their guilt. Rather than stop a sociopath, the hospitals push him out and seal his files, allowing him to continue unchallenged. It is appalling, and Lindholm smartly doesn’t lose sight of where the responsibility lies.

The approach is daring and admirable. It would’ve been easy to lay all the blame at Charlie’s feet without interrogating the systemic failures that aided and abetted him. Ironically, The Good Nurse mirrors the frustrating inertia of the hospitals it depicts. The film lacks urgency, feeling almost tepid about its murders. A foreboding sense that something is wrong doesn’t permeate the hospital. (A pale blue color palette captures the late-night hospital experience well.) Charlie occasionally drops an unsettling hint, but Amy, and the film, let it fly. On the investigative side, it lacks the immediacy and tension of even a broadcast television procedural. (It’s easy to wonder how Law & Order might’ve approached this disturbing case.)

The film does attempt momentum by way of Amy’s heart health. She must work for four more months at the hospital to qualify for health insurance. (It is another failure of the healthcare labor system.) That means not ruffling feathers or calling out sick, even though her doctor advises her to take medical leave. It’s a compelling dilemma that the film doesn’t quite know how to manage. Charlie doesn’t use it to his advantage; to the contrary, he’s downright supportive. When Charlie’s crimes come to light, Amy doesn’t stop to think about how she might be risking her life to expose him. The film could’ve played in some morally murky water. Instead, it ultimately boils their dynamic down to “good versus evil, but maybe there is some good in there somewhere.” It feels weightless, again, given the crimes at the core.

Much of The Good Nurse’s emotional heft comes from its two performers, Jessica Chastain and Eddie Redmayne. Chastain wears Amy’s exhaustion well, conveying a deep-seated weakness in her eyes and physical movements. She makes it easy to understand why Amy would be susceptible to Charlie’s overtures of friendship and support. When his crimes become undeniable, Chastain steels herself enough to process his betrayal while still offering him tenderness and kindness. Redmayne operates on a similarly minor key, carefully modulating between awkwardness, malice, and Charlie’s yearning for companionship. Only in the film’s final stretch does that tightly-coiled energy burst forth in a deeply unsettling yet satisfying display.

Chastain and Redmayne are an affecting pair, which raises the question of whether The Good Nurse would’ve hit harder focusing solely on them. Narrowing the scope and digging deeper into their relationship might’ve given the film a helpful narrative charge. But what about the trade-off? Does the film work without its stinging indictment of the American healthcare system? Morally, I’d like to say no. More people should know the craven, self-interested behavior that allowed a serial killer to harm patients without consequence. However, for the sake of a more engaging film, the sacrifice might’ve been worth it.

The Good Nurse is currently playing in select theaters and is available to stream on Netflix.