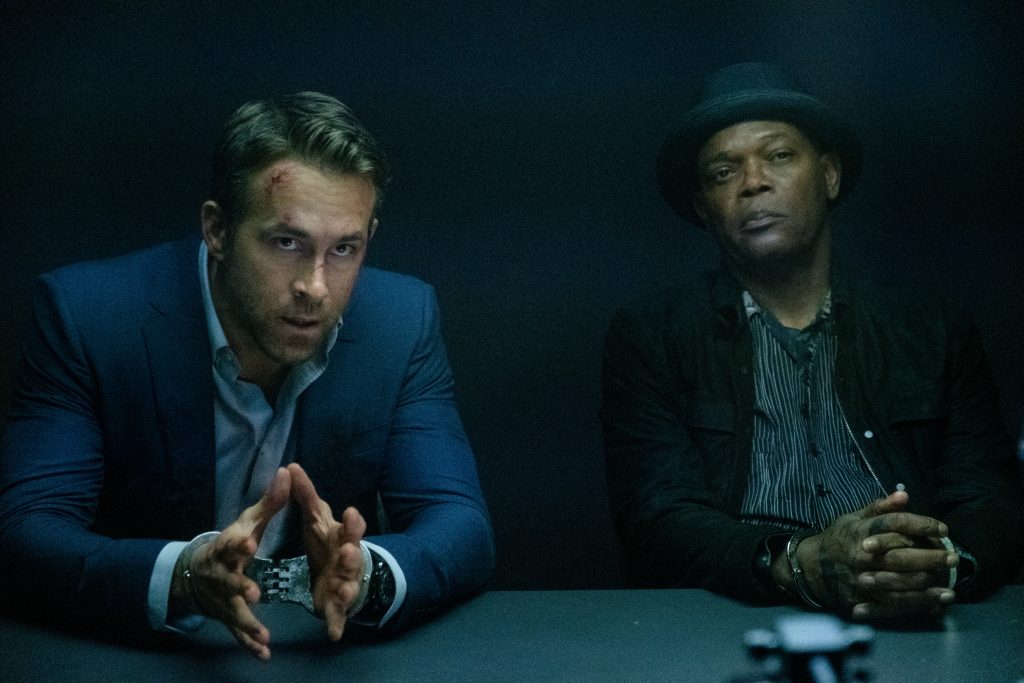 The world’s most lethal odd couple – bodyguard Michael Bryce (Ryan Reynolds) and hitman Darius Kincaid (Samuel L. Jackson) – are back on another life-threatening mission. Still unlicensed and under scrutiny, Bryce is forced into action by Darius’s even more volatile wife, the infamous international con artist Sonia Kincaid (Salma Hayek). As Bryce is driven over the edge by his two most dangerous protectees, the trio get in over their heads in a global plot and soon find that they are all that stand between Europe and a vengeful and powerful madman (Antonio Banderas). Joining in the fun and deadly mayhem is Morgan Freeman as… well, you’ll have to see.

Whether it’s teamwork, collaboration, partnership, or whatever term you want to use, working together rather than being opposed tends to end better for everyone. Even when forced to join the opposition for a common goal, a gap is usually bridged and realizations are had. The fact that common can always be found if the time is taken to find it, shows us that we’re not so different. Unfortunately, humanity has a dark sense of humor and has set up almost every facet of life like gangland, you’re either this or that even if you choose not to participate. Until we all realize that the game is rigged and find some way to come together like Voltron, set trippin’ will be at an all-time high.

“Oh, we are definitely gonna fuck this up.”

So Deadpool, Nick Fury, Ajak, and Crossbones walk into a bar, my bad, wrong universe. So Green Lantern and Lucius Fox walk int… dammit, I did it again. When you want a foul-mouthed good time who else do you need other than Ryan Reynolds and Samuel L. Jackson? Well, Selma Hayek, apparently. The follow-up to the 2017 hit, The Hitman’s Bodyguard, The Hitman’s Wife’s Bodyguard is a comedic ride full of f-bombs, firearms, and fun times. In this film, no fucks are given but all fucks are said. Exceeding its predecessor in action, ammunition, and humor, this film is like an angry mascot fresh out of the penalty box with a score to settle. While it may not be an award-winning film, it is a great break from reality, both figuratively and literally. No one gets shot at this much and lives to talk about it except Dominic Toretto, John Wick, John McClane, Rambo any Arnold Schwarzenegger character, okay, so it’s on par.

Taking action movie tropes to exaggerated heights, it almost falls into spoof territory but doesn’t cross that line of spoof absurdity. The film may be too profane for some and some of the humor is juvenile, but funny is funny. With the soundtrack playing a comedic role as well as its repeated location changes within the same country, if you don’t have fun watching this, you just don’t want to have a good time. Do you need to have seen the first film to enjoy this one? Not necessarily, but there are a few callbacks to the first film that may elude you. Also, the level of chemistry will be underappreciated.

There are some winks to past action hits and since Antonio Banderas joined the cast you know Desperado is one of those hits. The additions of Banderas, Frank Grillo, Tom Hopper, and Morgan Freeman make for some very funny and entertaining moments. I laughed more than I expected too and so did the audience around me during the screening. My favorite part of the film is Selma Hayek. She has an immensely bigger role this time around and it did not go to waste. Her line delivery is hilarious and oftentimes in the cadence that is reminiscent of Ryan Reynolds. Therefore, I can’t help but think that he helped develop some of her dialogue because no one splices together vulgar vocabulary as he does. With its interesting twists and outrageous heartfelt moments, this film is one you’ll remember. I enjoyed The Hitman’s Wife’s Bodyguard and I think you will too. This is one of those instances where the sequel surpasses the original. Its rewatchability is high. 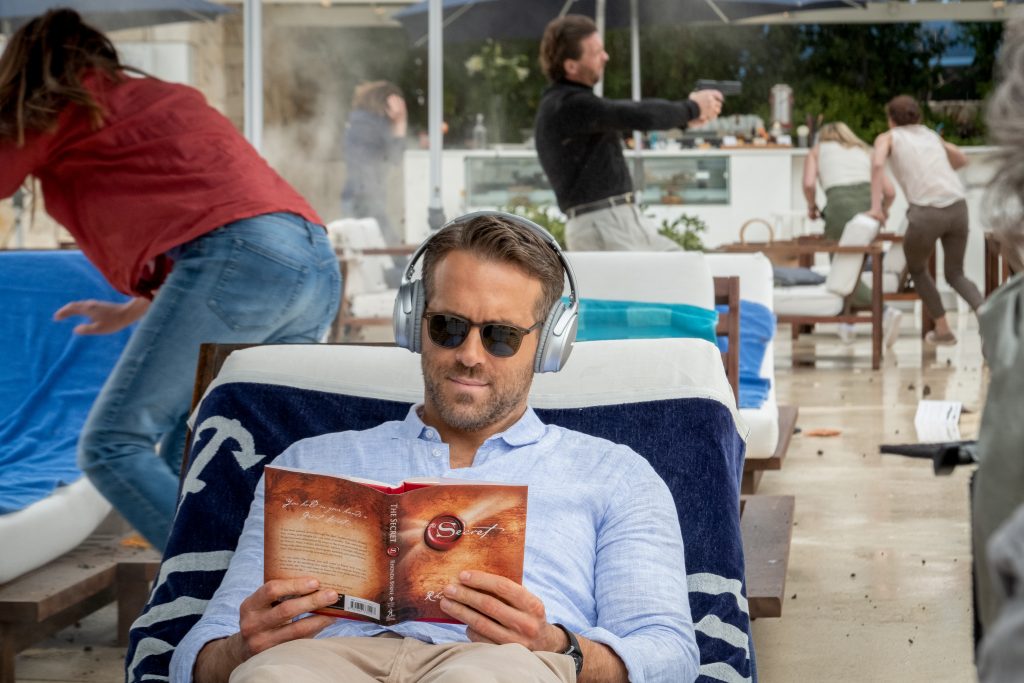 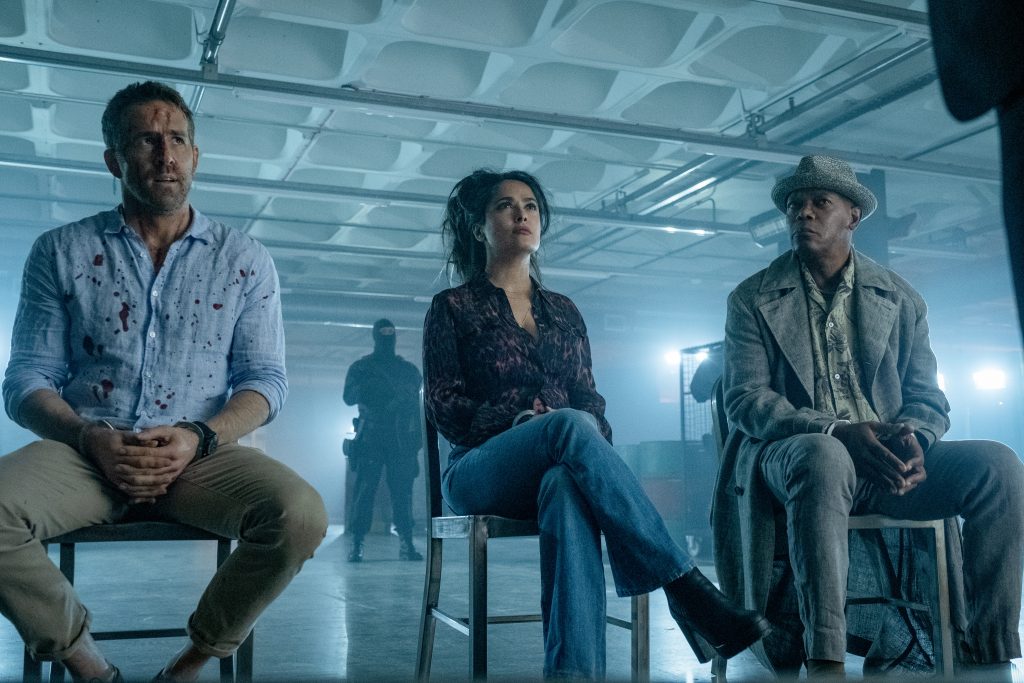 The pacing of the film is petal to the metal throughout the entirety of the film. The only moments that took me out were some of the scenes between Sonia and Aristotle. At times It didn’t fully feel cohesive to the story for me. Even though it’s pivotal to the development of the plot, it felt wedged in there. 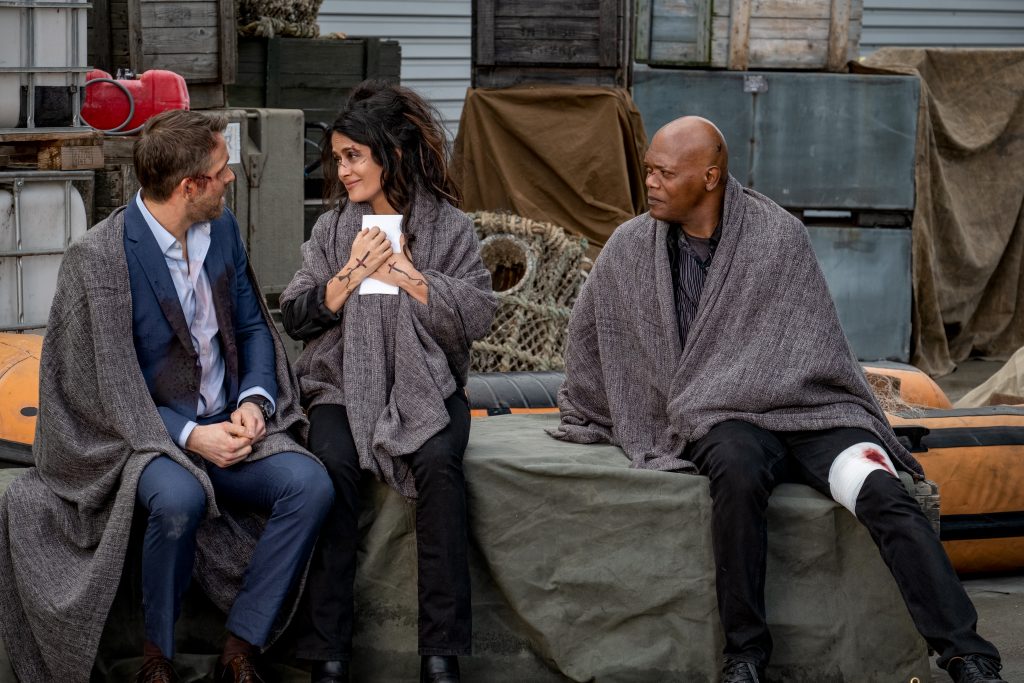 The chemistry in this film couldn’t be any better. The trio of Ryan Reynolds, Samuel L. Jackson, and Selma Hayek is more hilarious than I could’ve thought. They all play off of each other effortlessly, leading to perfectly timed and delivered comedy. Michael Bryce (Ryan Reynolds) just wants his bodyguard license reinstated but has some demons to work through. Darius Kincaid (Samuel L. Jackson) wants to be rescued and start a family with his wife, Sonia. Sonia (Selma Hayek) wants to be a mother by any means necessary. They all go through personal transformations that wrap up in an unexpected way.

The Hitman’s Wife’s Bodyguard releases in theaters on June 16, 2021. Stay safe and enjoy. 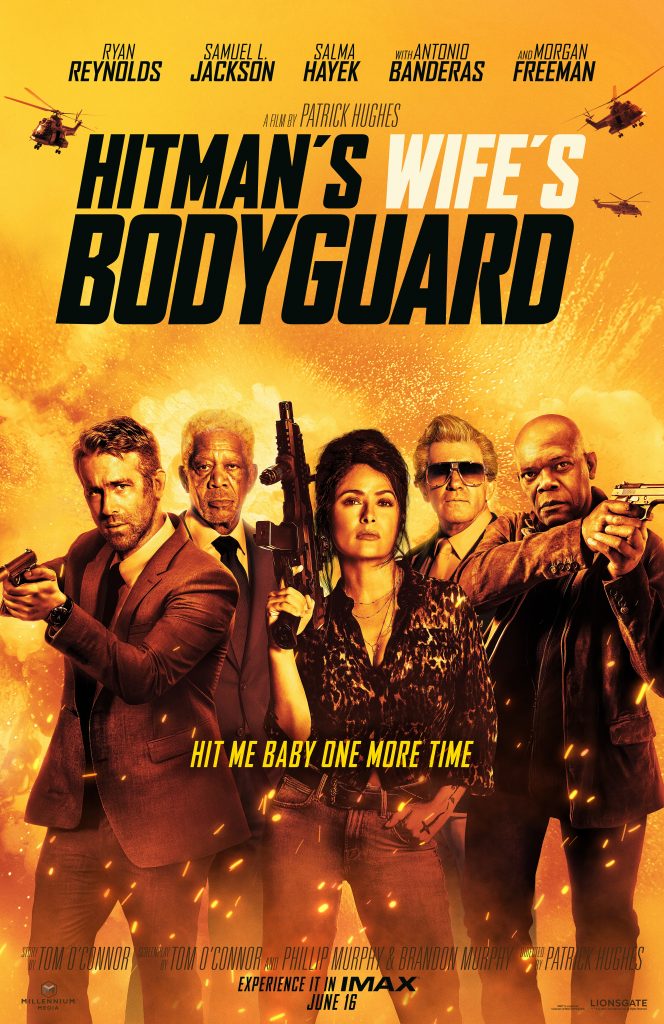