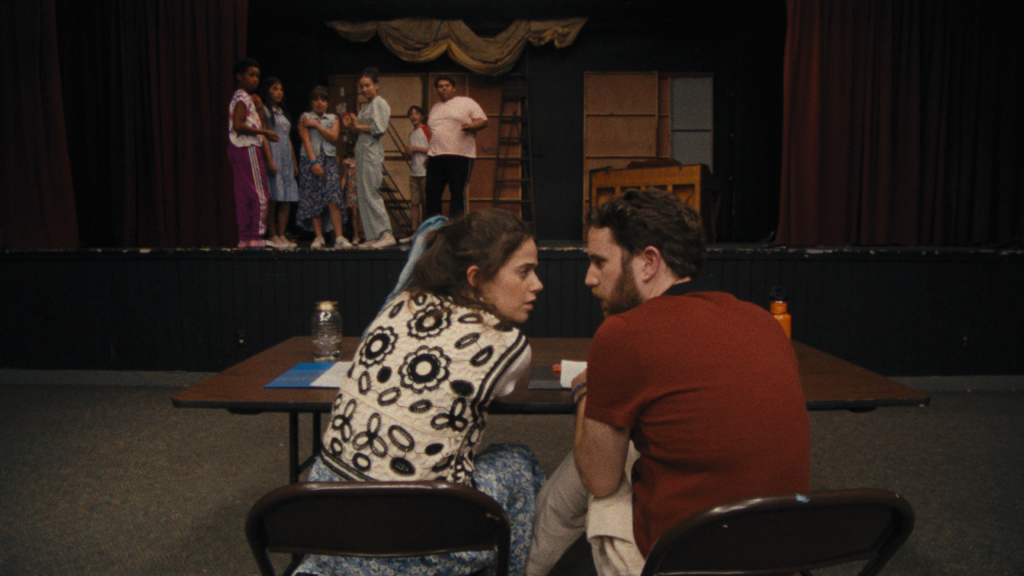 If you’ve ever wondered what it would be like if Glee, Smash, Camp Rock, and Parks and Recreation had a baby, then Theater Camp‘s the movie for you. Directed by Molly Gordon and Nick Lieberman, Theater Camp is an absolute love letter to live theater and summer camps of all kinds. It’s unabashedly silly, it wears its heart on its sleeve, and it’s utterly joyous from start to finish. If you’ve ever felt like an outcast, in search of somewhere to belong, then Theater Camp might just speak to you. Sure, the film won’t be for everybody; its audience is likely to be fairly niche at best. But if you’re the kind of person Theater Camp appeals to, then you’re gonna have a great time with it.

A Loving Blend of Familiarity

After Joan (Amy Sedaris), the scrappy leader of a summer camp for theater kids, falls into a coma, her clueless son, Troy (Jimmy Tatro), and the rest of the camp’s teachers (Ben Platt, Molly Gordon, Noah Galvin, Nathan Lee Graham, etc.) join forces to keep the camp running and save it from financial ruin. Along the way, they’ll have to learn to work with each other, quirks and all, to give the kids a summer they’ll never forget. Basically, it’s Camp Rock but for musical theater. If that sounds like a great time to you, then you’re exactly who the movie is hoping to reach. A total love letter to the ups and downs of both live theater and summer camps, Theater Camp is as emotional as it is totally absurd.

The film definitely feels like a remix of a bunch of other movies and TV shows. It’s shot mockumentary style, like Parks and Recreation. It’s got the weird humor and heightened drama of Glee. There’s a healthy dose of Smash, with its over-the-top glimpse at the making of a musical. And there’s a whole lot of Camp Rock and similar summer camp movies here. Camp Rock is the obvious comparison, given the subplot of the camp’s financial troubles, and a rival camp’s interest in buying the land. Instead of being distracting, all of that familiarity comes together in a wholly original, fresh way. It’s a laugh-out-loud riot, and the absurdity just keeps piling higher. I mean, the final third of the movie even takes the form of a show-within-a-film, and it’s just so much fun. What more could you ask for?

That being said, Theater Camp isn’t without problems – chief of which is its lack of focus. While the film juggles its two plotlines fairly well, it often feels like it’s just drifting at sea. Simply put, the narrative lacks much in the way of forward momentum. Things just kind of happen, often without any real sense of cause and effect. Time passes in a very uneven way, days and weeks at a time, with fairly little being different from one scene to another. Despite there being a pretty coherent narrative at play, it doesn’t necessarily feel like you’re actually watching a story play out. All of the pieces are there, they’re just not strung together as tightly as they could’ve been.

The problem is that many of the scenes don’t necessarily feel like they’re pushing the narrative forward or drawing audiences further into the lives of the film’s characters. Instead, they often feel like extended sketches, harping on some absurd element of theatrical summer camps. There are montages of rehearsals, weird stage combat scenes, and even a sequence where the kids work as waiters for a fundraising event. While all of those elements certainly add to the film’s charm, they also make the act of watching the film feel somewhat tedious at times. The movie works far more than it doesn’t, to be clear, but nobody’s gonna walk away from Theater Camp singing the praises of its narrative.

Saved By a Strong Ensemble

That being said, the strong performances from the film’s ensemble more than make up for any amount of narrative woes. Led by the one-two-three punch of Ben Platt, Molly Gordon, and Jimmy Tatro, the cast perfectly balances quippy, absurd humor with genuine pathos. Tatro plays Troy’s cluelessness so perfectly that it could’ve easily grown grating. Yet, he also brings an almost childlike innocence to the character that makes him incredibly endearing as he tries to understand these theater kids. Platt and Gordon play a pair of teachers and writing partners whose relationship has clearly grown strained over the years. Both of them bring such specificity to their roles, immediately evoking thoughts of any number of over-the-top theatrical teachers in anyone who’s ever taken a theater class. At the same time, all these characters feel like real people – even as they inhabit these over-the-top archetypes.

The rest of the cast is equally strong, too. Noah Galvin frequently steals the show as Glenn, a tech teacher who longs for the spotlight of the stage. The rest of the adults (Nathan Lee Graham, Amy Sedaris, Caroline Aaron, etc.) are all excellent, even if they don’t have a whole lot of screen time. A special shoutout goes to all of the kids in this movie. They’re not necessarily given a ton to do throughout the film, but each and every one of them finds a moment to shine. A part of me wishes the film had focused a bit more on the kids at this camp rather than on the counselors, but I do think the film strikes a nice balance for everyone. The kids all get to play a pretty fundamental part in the film’s climax, so at least there’s that.

At the end of the day, I really enjoyed Theater Camp for what it was. It’s a very charming, over-the-top mockumentary about a struggling theater camp. Sure, it’s corny and its narrative lacks some much-needed focus. But the humor lands more often than it misses, the cast is beyond charming, and the film crams such move love into its 94-minute runtime that I’d challenge anyone to leave the film without smiling just a little bit. It won’t be the kind of movie for everyone, but if this is your cup of tea, you’re gonna have a great time with it. It’s cheesy, absurd, and full of heart. And sometimes, that’s all you need to succeed.

Theater Camp had its World Premiere in the U.S. Dramatic Competition section of the 2023 Sundance Film Festival.

"Theater Camp" is a love letter to live theater and the ups and downs of attending a summer camp. It's cheesy and a bit unfocused, sure. But it's so full of joy, and so crammed with endearing performances that it's easy to get swept up in the magic.