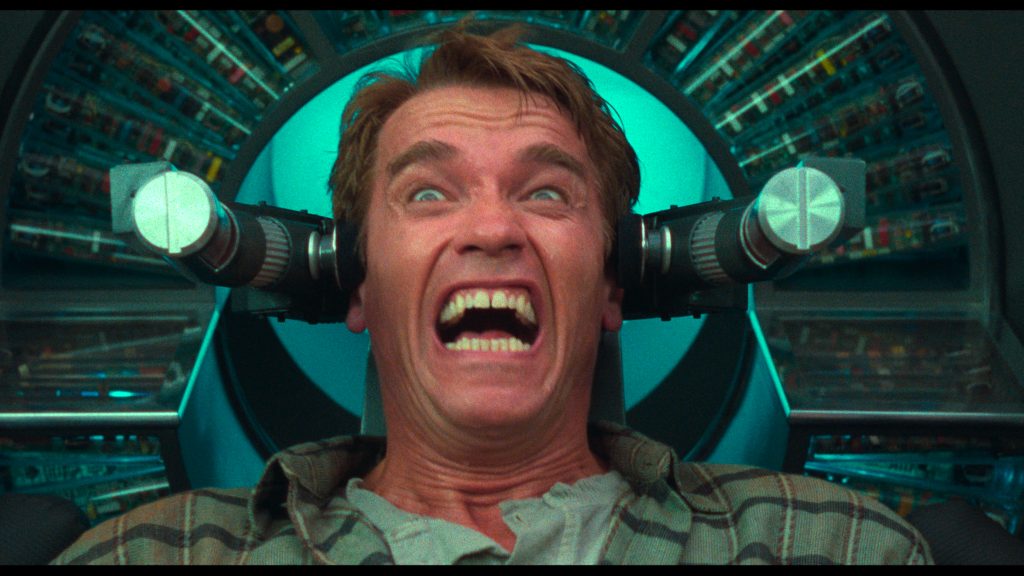 One of the most fun things about the science fiction genre is the ability to play in a variety of different sandboxes. Sometimes you want to go for something safe and family friendly, such as E.T. or Star Wars. These are films built for broad appeal, and they are incredibly easy to love. But sometimes you just need something with a bit more of an edge, such as Alien or Robocop. These films are not built for everyone, but they are a hell of a lot of fun for the audiences with which they do resonate. Throughout the mid-80s, various creative types tried to adapt the Philip K. Dick short story “We Can Remember It for You Wholesale,” which led to over forty drafts of the script being written without it being successfully made. Thankfully for audiences, Arnold Schwarzenegger saw the potential for this story and spearheaded the creation of what would become Total Recall. Impressed by his work with Robocop, Schwarzenegger brought controversial director Paul Verhoeven on to direct what would become one of the most expensive films ever made at the time of its release. The gamble paid off, as Total Recall became an international hit upon its release in 1990 while simultaneously garnering solid critical acclaim. As we celebrate the 30th anniversary of this landmark film, we take a look back at what made it so much fun.

In the year 2084, Douglas Quaid (Arnold Schwarzenegger) is plagued by dreams of Mars and a beautiful woman who greets him there nearly every night. Quaid has never actually been to Mars, at least that is what he believes to be true. His real-life wife Lori (Sharon Stone) is none too pleased that her husband is having dreams of other women, but she is more concerned about his growing obsession with taking a trip to Mars. The governor of the Red Planet, Vilos Cohaagen (Ronny Cox), is fighting a very public rebellion against some so-called riff-raff, and its appeal as a vacation spot seems extremely limited. In an attempt to exorcise the visions in his head, he pays a visit to the Rekall, a company that specializes in implanting false memories of vacations. With everyone needing to stay home right now, wouldn’t that be helpful? Quaid chooses the package in which he will believe himself to be a secret agent on a trip to our neighboring planet. It is during the procedure, though, that the technicians discover that these dreams that he has been having are actually suppressed memories of his actual identity as a secret agent named Carl Hauser. The procedure goes horribly wrong, and Quaid ends up on the wrong side of some bad guys. Or does he? Is this just his implanted fantasy playing out like he ordered? 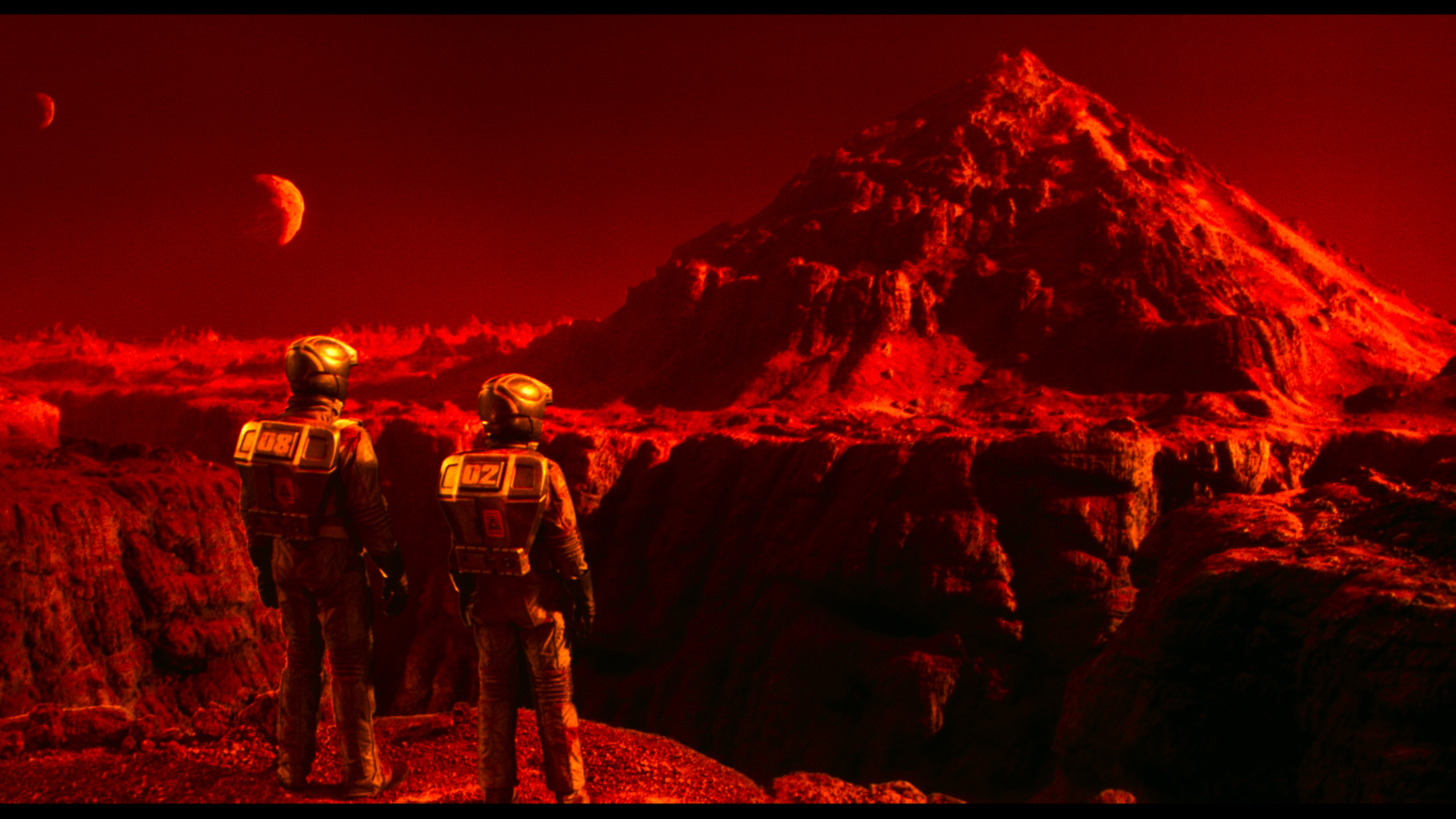 No matter what you choose to believe, the adventure that transpires from here is one wild ride. From the bloody encounters and betrayals on the home front to the mystery and intrigue that leads him to his dream planet, this movie is immensely entertaining. Say what you will about Verhoeven, but he was the perfect person to direct this movie. Schwarzenegger has some surprisingly restrained scenes between both Stone and his dream girl Melina (Rachel Ticotin) that are just titillating enough to serve their purpose within the story. It is in the excessive violence where the director delves into his bag of tricks that he established in works such as Robocop. Similar to that feature, Total Recall was criticized for the over-the-top violence that honestly does not feel so extreme as we see how far films have evolved. I personally love my action bloody and excessive in this type of environment. Does it make me a sick person to laugh as Schwarzenegger uses some innocent bystander as a human shield that gets torn to ribbons via intense gunfire? Give me the gleeful excess of Verhoeven over some hyper-realistic, dour slog that forgets that the story is supposed to entertain. What Verhoeven does not lack is a sense of building energy that keeps you glued to the screen from beginning to the end.

It must have been at least fifteen years since I last saw this film, and I was delighted to be greeted with an intriguing story filled with surprising reveals and ruthless villains. Cox is great as the “big bad” of the story, but I personally bow to the great Michael Ironside who plays Richter. Ironside was born to play a villain, and his ceaseless pursuit of Quaid keeps you appropriately on edge throughout. If there is a complaint to lodge at Verhoeven, which honestly is more so a problem with the script and the period of time in which this was made, it would be the lack of depth to the female characters in the film. You get the minimal amount of characterization to raise them above the level of cardboard cutout. You cannot change the past, but it is nonetheless disappointing. I am often ashamed at myself for forgetting how strong of an actor Schwarzenegger can be in these roles. He has never been Oscar-worthy, but he has always brought a charisma to his performances that elevates him above countless other muscle-y dudes that have faded into obscurity. Another aspect I was glad to see hold up after all of this time is the special effects on display. Much of what you see on the screen was done practically, and the movie is so much stronger for it. This movie is just pure unhinged fun. If you generally have fun with this type of movie and you have not seen this yet, you are in for a real treat. 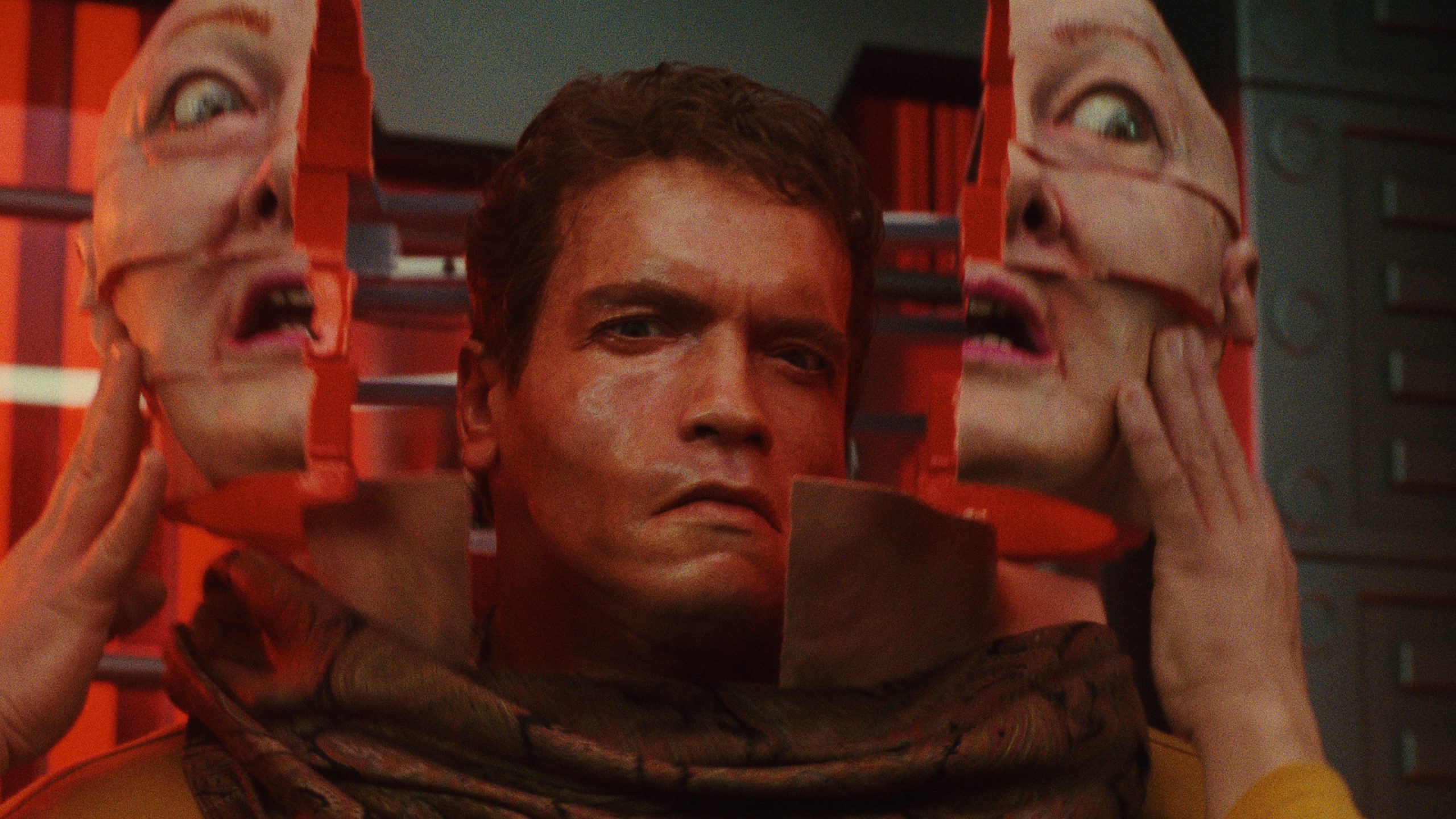 Total Recall debuts on 4K UHD Blu-Ray with a pretty solid 2160p/Dolby Vision transfer sourced from a 4K scan of the original camera negative. For perspective, I do not have access to any previous versions of the film on Blu-Ray, which I have read has slightly different color timing. When compared with the accompanying 4K mastered Blu-Ray that accompanies this package, the 4K disc offers outstanding improvements in all respects. The improvements in contrast and overall clarity are readily apparent, especially in unique details like the production design of the Rekall center. The UHD disc contains very nuanced, deep colors throughout including the extremely bright red landscape of Mars and more. When referring back to the Blu-Ray, colors appear to be a bit more pushed and less complex than the 4K disc. White levels are brighter and more stable without veering into blooming. Black levels are deep and allow the picture to maintain a good amount of depth and detail in darker environments.

There is a good amount of natural film grain that resolves naturally and gives a lot of nice texture and detail to the transfer. While the transfer looks quite good, there are some truly unsightly moments where the picture goes to hell and showcases large amounts of artifacting and macroblocking due to some incredibly poor encoding. These issues are mostly nullified when viewing in Dolby Vision, but this is a bummer for those who are not DV capable. These instances appear most noticeably against the bright red Mars landscape. Skin tones largely look great, but there are instances where characters look a bit desaturated. The clarity of the transfer gives you a great amount of facial detail including fine droplets of perspiration and blood spatter. By and large, this transfer is very good, but it is marred somewhat by poor encoding which makes certain moments stand out as especially bad. This transfer is not bad, but it could have been significantly better with a little more care taken during quality control. 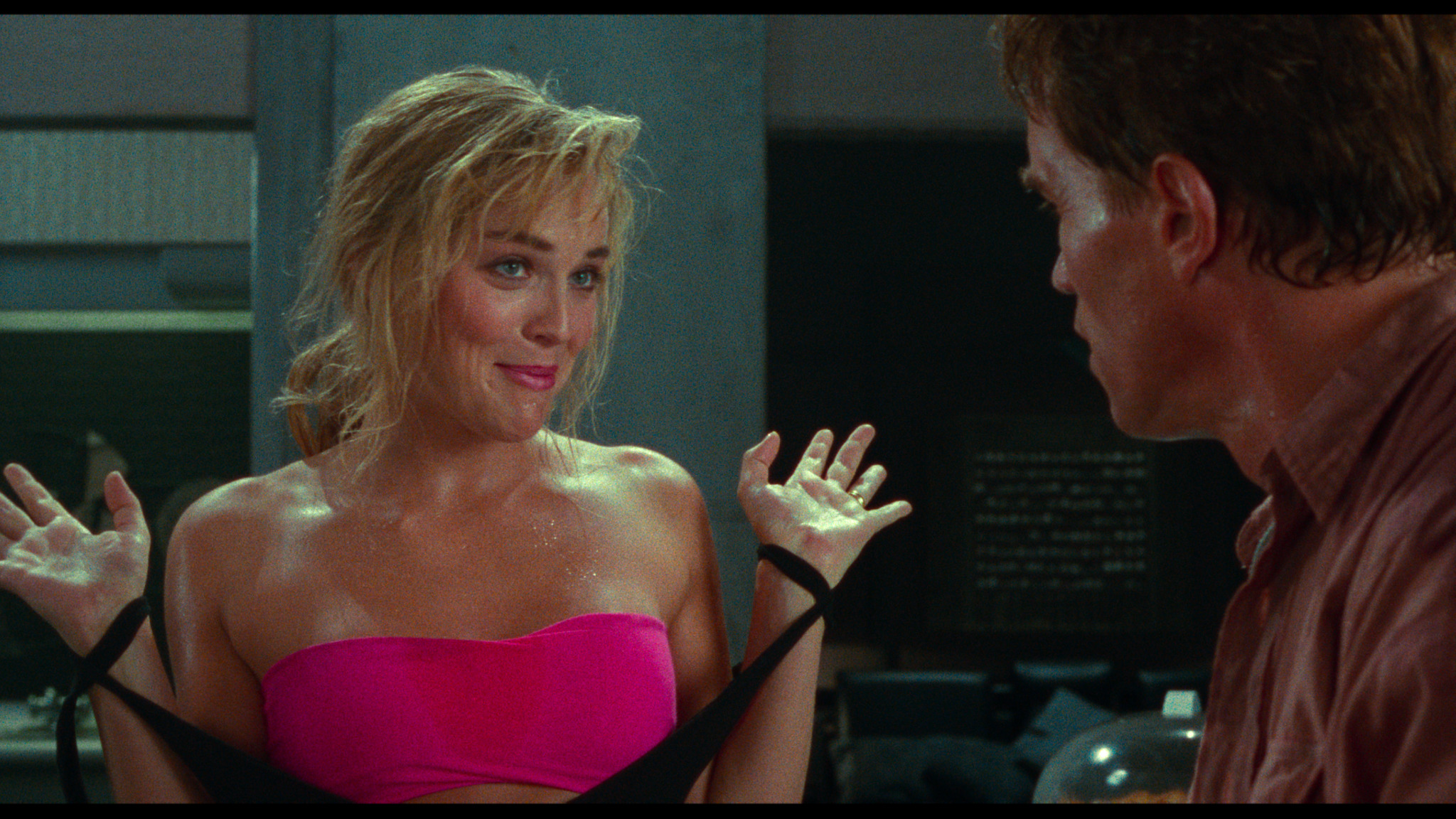 The 4K UHD Blu-Ray disc comes with a very strong Dolby Atmos presentation that handles the action incredibly well. The track offers top tier immersion into the environment so that even the subtlest elements are represented. The Atmos presentation takes full advantage of the expanded channel allotment. During the climactic reactor rod sequence, the channel separation is readily apparent with height channels coming alive from the kinetic sequence. All of the sounds are balanced well during the action sequences from hand-to-hand combat to heavy gunfire. The many fights and other such hard-hitting moments provide a fantastic amount of activity in the low end. Directionality of sound is never an issue with this track, and dialogue is reproduced with supreme clarity. Speakers remain remarkably engaged throughout the film, even during the quieter moments. If there is any small complaint with this track, it is that the wonderful Jerry Goldsmith soundtrack lacks the power one has come to expect from such a notable composer. Overall, though, the audio presentation is a wonderful experience from start to finish. 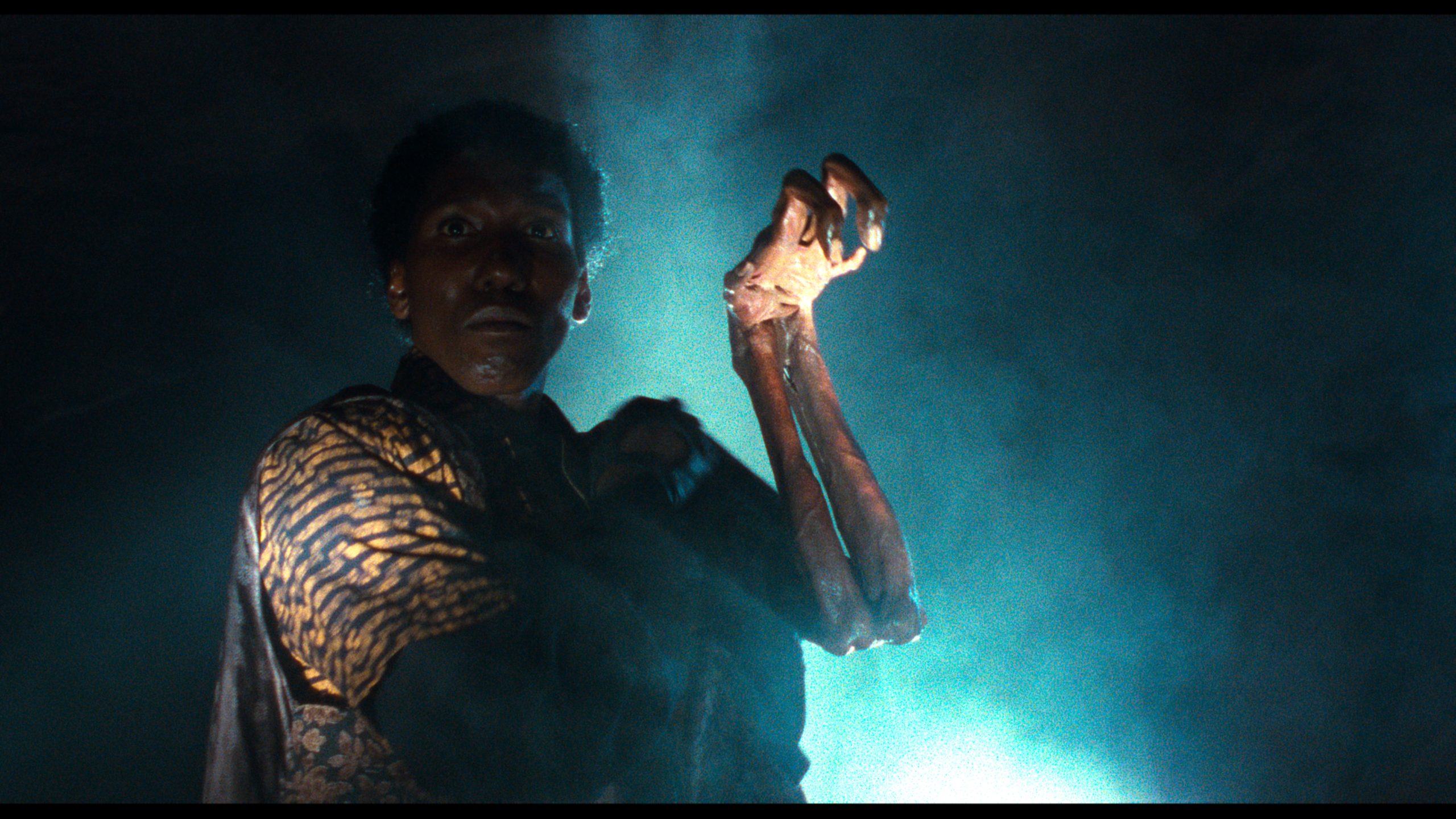 Total Recall is a film that holds up extremely well thirty years after its release. The movie is perfectly paced with bouts of incredible, over-the-top violence and a very strong performance from Arnold Schwarzenegger. The film does a great job of tapping into Schwarzenegger’s strengths while still giving him a meaty acting challenge to tackle. The new 4K UHD Blu-Ray from Lionsgate is largely very strong, but instances of poor encoding keep this from being a 5-star affair. Despite some issues, this new 4K version is a substantial upgrade and worth checking out for fans of the film. Recommended

Disclaimer: Lionsgate Home Entertainment has supplied a copy of this disc free of charge for review purposes. All opinions in this review are the honest reactions of the author.