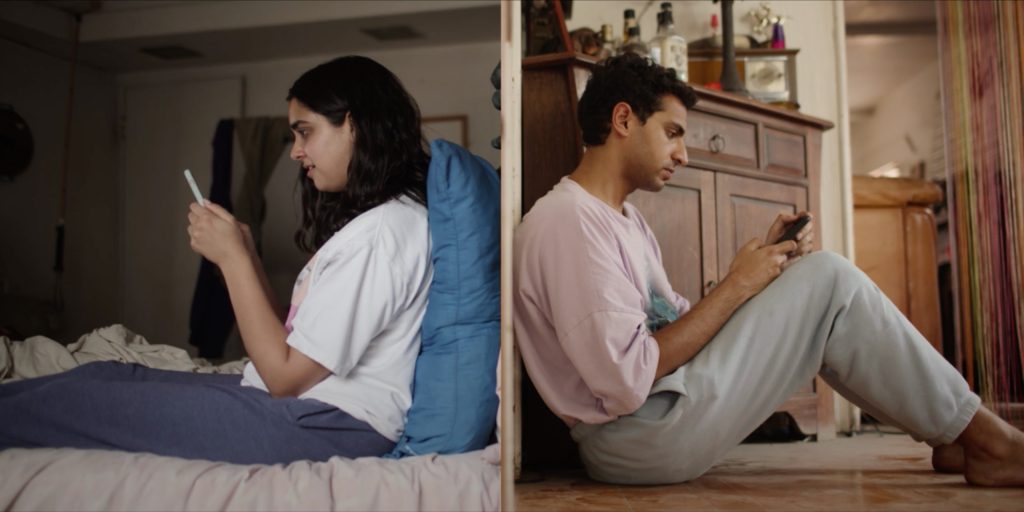 As frustrating as it might be for cinematic escapists, stories about the pandemic aren’t going anywhere. Whether it is in the background (Mimi, Locked Down), or is the central premise (In The Earth, The Bubble), the impact of COVID-19 has shaped the many storytellers who withstood it and likely will continue to show its effects on the independent film industry. Sure, Marvel and James Bond may edit around coincidental viruses in their stories, but filmmakers like Roshan Sethi and Karan Soni will wear masks, clang pots outside of windows, screen record zoom calls––they want to remind us of the surreal, collective experience we all shared. As though any of us would ever forget it anyway.

This is all to say that 7 Days, Sethi’s directorial debut produced by the Duplass Brothers, is a direct product of the pandemic but has plenty to offer beyond the baked-in premise. Centering on two Indian-American singles who are forced to shelter-in-place together after a lousy first date, it has in spades what a lot of other romantic comedies lack, even without a viral disease driving it: a unique cultural perspective, genuine heart and soul, and dynamic cinematography that makes a single house fit several different molds.

In a combination of lucky set scouting and excellent work from director of photography Jeremy Mackie, the film’s single location feels fresh in every scene. The solutions implemented here are not so sophisticated; Sethi has spoken about how the time constraints whilst showing during the pandemic forced him and his crew to work quickly. It’s some color-changing lights here, underexposure there, even some warm mood lighting every now and again. But it all coalesces together seamlessly, making for a surprisingly cinematic experience that represents the evolution of not just the pandemic, but of the two main characters and their relationship.

Ravi and Rita, our two leads portrayed by Karan Soni and Geraldine Viswanathan respectively, are a too-perfect foil for one another at first glance. Ravi’s traditional earnestness juxtaposed to Rita’s free-spirited modernism make for the obvious surface-level disagreements and the banter that ensues. But both characters are more grounded than these archetypal roles may imply. It’s easy for the differences between them to feel played out after too long, which is likely why Sethi and Soni subvert the usual contrivances by having the characters open up to each other sooner rather than later. In one pivotal scene, Ravi performs stand-up for the first time at Rita’s request. What begins as something playful, just two people attempting to have some fun during an unprecedented time, slowly transforms into our first moment of honest vulnerability between the characters. It was a welcome, genuine monologue that foreshadowed one of the movie’s greatest strengths.

As the two get to know each other, and we learn more about them individually, the movie continues to play with our expectations. Many films of this kind would have its lovebirds endure some kind of complete 180, an attempt to show the other person just how much they want to be with them. But 7 Days is not that kind of romcom. Its romance is subtle, given there’s a whole panini going on, but neither character suddenly betrays their own beliefs. Rita comes to re-evaluate many of her own choices on her own accord thanks to many strong moments of choice in the writing, and Ravi’s family-oriented strengths actually come into play after a detrimental storytelling turn in the third act. The ending keeps things relatively ambiguous, a choice that may not satisfy everyone but certainly reflects the film’s insistence on cultivating nuance in its characters.

Soni and Viswanathan have good chemistry, likely thanks to their off-screen friendship and previous on-screen collaborations, and the humor is cute and relatively light throughout despite its modern sensibility. Viswanathan especially continues to deliver a strong comedic presence on-screen. Her delivery is sharp and her facial expressions do more to convey humor than certain dialogue exchanges. One off-screen voiceover is a particular highlight. Though the third act relegates her to more serious matters, you’d be wise to look out for any further comedic turns from her.

That being said, it certainly isn’t laugh-a-minute humor. People looking for something that will leave them wheezing should look elsewhere. But how much comedic momentum can you really have when you make the choice to explicitly weave your story’s stakes into the panini? Sethi and Soni treat the world event with moments of levity but never at anyone’s expense, making for some fun moments of absurdity in hindsight but, more importantly, sobering moments of connection and, dare I say, drama. I would argue the panini brought out more honest connection than silly one-liners or wacky hijinks. So, in a way, it’s fitting that this movie feels more like a complete package of a film, a comedic jaunt that still carries some weight, than something far more trivial and what will ultimately be forgettable.

So, will 7 Days stand the test of time, when the pandemic eventually, eventually, becomes something people can laugh about? Perhaps. But, in the end, this was a movie made deeply in this moment, so it stands to reason that it should be for this moment, a moment that feels longer and longer with every passing day. Regardless, by the time this movie becomes irrelevant, Roshan Sethi and Karan Soni will likely have solidified themselves as strong talents in the indie film world, and this film lays a strong foundation for whatever projects they may tackle next.

7 Days is currently playing in select theaters courtesy of Cinedigm. The film will be available on VOD beginning April 26, 2022.