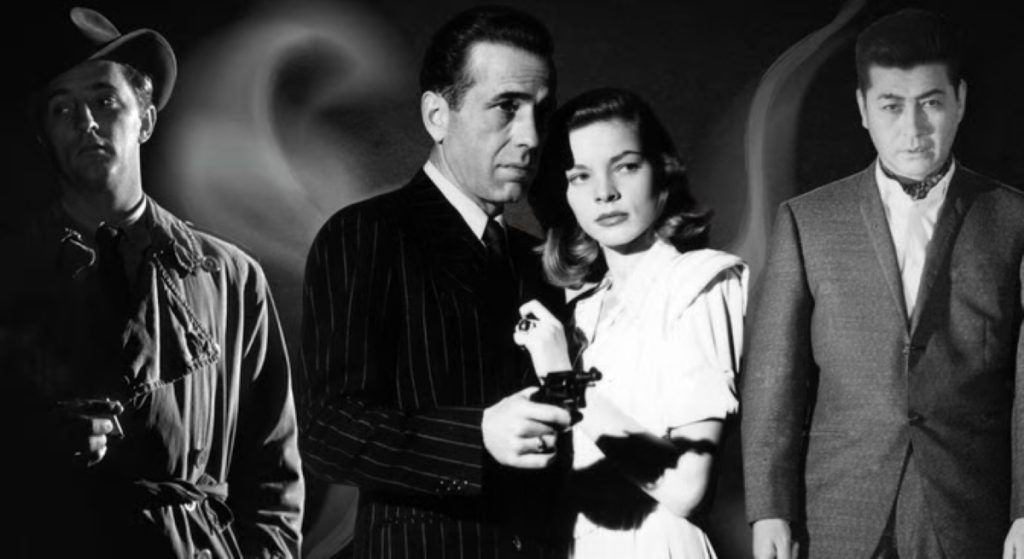 If you’re pining for another themed movie-watching month with Spooky Season over, you’re in luck; it’s time for #Noirvember. Coined in 2010 by critic and entertainment journalist Marya E. Gates, Noirvember is a play on words that combines film noir and, you guessed it, November. Gates wrote in TCM that she came up with the hashtag as a mechanism for her to “catch up on the top noir films.” In the years since the idea has blossomed into a month-long coming together for noir aficionados and rookies alike to celebrate one of the great film genres.

For the unfamiliar, film noir is a genre that applies to films that first appeared in the 1940s. Reacting to the impact of World War II on American life and culture, film noir embraced the moral ambiguity of wartime. These films focused on stories set in the country’s seedy underbellies and back alleys of the country. The term grew out of French film theory, noting the aesthetic approach in film noir to play up shadows and contrast, a visual language that complemented the darkness of the narratives.

While the genre’s heyday was the post-war period, the decades since have embraced and re-tooled the genre. Filmmakers worldwide have picked up the trappings and archetypes, running with the delicious possibilities of making movies anchored by hardboiled detectives, femme fatales, and all manner of backstabbings and double-crosses. With that in mind, the suggestions below make up a starting point for folks who may not have yet dabbled with the film noir canon. These titles are a collection of classics, touchstones, and a few deep cuts just for fun.

While not quite a fully-formed classical film noir, The Maltese Falcon is arguably the film that defined the baseline for everything that came after. Adapted from a Dashiell Hammett novel and directed by John Huston, The Maltese Falcon follows private detective Sam Spade (Humphrey Bogart) as he is sucked into the orbit of a group of criminals all searching for the eponymous statue. Spade’s partner Miles Archer (Jerome Cowan) is killed, and Spade falls for the mysterious Brigid O’Shaughnessy (Mary Astor). Reveling in the foggy San Francisco atmosphere and Bogart’s ruthlessly cynical performance, Huston and company sculpt a studio picture steeped in visual and moral murk. For Bogart, it capitalized on his pre-existing gangster roles and molded them into a new archetype that would define much of the rest of his career. If you want to understand where film noir launched, The Maltese Falcon is the answer.

Yes, this is back-to-back Bogart, but no film noir list would be complete without Howard Hawks’ masterful The Big Sleep, an adaptation of the smash hit Raymond Chandler novel. Here, Bogart stars as private eye Philip Marlowe, brought in by a wealthy father to ensure his wild-child daughter Carmen (Martha Vickers) won’t be blackmailed for her gambling debts. Yet, once Marlowe starts poking around, he discovers a web of crimes and secrets that criss-cross Los Angeles. It also deposits him in front of Vivian Rutledge (Lauren Bacall), Carmen’s older sister, and arguably the definitive femme fatale of the 1940s. The film may be infamous for its dense and illogical plotting, but that hardly matters when you’re in it. Bogart and Bacall’s blistering chemistry is on full display, and few Hollywood golden age directors are more kinetic than Hawks. It’s a classic for a reason.

If Bogart is the king of noir, Robert Mitchum is the crown prince. A hard-living actor with a penchant for cigars and whiskey, Mitchum brought heft to his film noir roles. Look no further than the Jacques Tourneur-directed Out of the Past for proof. Mitchum plays Jeff Bailey, a former private eye who has run away from New York to start a new life in California. But the past never can stay away, and when a face from New York arrives to tell Jeff he needs to meet with gambling kingpin Whit Sterling (Kirk Douglas), the new dream starts to shred. Relayed as an extended flashback as told to Jeff’s lover Ann Miller (Virginia Huston), Out of the Past unspools his shady history before it comes crashing into the present. Coming off a string of iconic horror films, Tourneur directs it all with a chilling beauty you won’t soon forget.

Even though film noir grew up in Hollywood, it came of age as a genre of the world. For Japanese master Akira Kurosawa, the genre offered a framework to reckon with the mayhem of post-war Japan. Stray Dog follows rookie Detective Murakami (Toshirô Mifune) who has his pistol stolen while riding the bus. Under the guidance of the veteran Chief Detective Sato (Takashi Shimura), Murakami barrels into the Tokyo underworld in search of his gun. The two men grow close, sharing wartime experiences with Sato trying to mentor Murakami. The actors are sensational together, and as Kurosawa regulars, it is a taste of so many performances to come. Under Kurosawa’s breathtaking directorial eye, Mifune, Shimura, and Tokyo itself commingle into the portrait of a broken country desperate to recover from the traumas of war. Both heartbreaking and invigorating, Stray Dog pushes film noir in welcome new directions.

A second Mitchum performance for you, but this time in the form of a film noir that doubles as a terrifying thriller. Renowned actor Charles Laughton’s only directorial credit, The Night of the Hunter sees Mitchum as Rev. Harry Powell who has just sprung from prison after a car theft sentence. What the world doesn’t know is that Powell is also a serial killer who targets women he sees as sexually promiscuous. While in prison, his cellmate spoke of $10,000 the man buried before getting caught, but when the cellmate ends up dead, Powell seeks out his widow Willa Harper (Shelley Winters) and their children John (Billy Chapin) and Pearl (Sally Jane Bruce). Mitchum is genuinely chilling in the role, and Laughton expertly turns the West Virginia setting into a gothic purgatory with a handful of images that live on as nightmare fuel.

Hopping over the pond to London, Victim offers an example of a neo-noir crafted to embrace the genre trappings while deploying them to mount resounding social commentary. Directed by British noir and crime veteran Basil Dearden, Victim centers on the esteemed barrister Melville Farr (Dirk Bogarde). Farr is in the conversation for a royal appointment and appears happily married to his wife Laura (Sylvia Sims). Yet, it turns out Farr has a secret relationship with Jack Barrett (Peter McEnery) at a time when England still treated homosexuality as a significant criminal offense. Barrett comes to Farr because a blackmailer has approached him with proof of their relationship, and that revelation spurs Farr to plunge into the savage realm of British blackmailers. As much a condemnation of rampant homophobia as a breathless and paranoid thriller, Victim is a haunting use of film noir to vivisect the results of legalized hatred.

Masahiro Shinoda’s Pale Flower takes us back to Japan and to a sterling example of the yakuza version of film noir. Yakuza are the Japanese version of mobsters, members of a national crime syndicate that operate through violence and intimidation. Shinoda’s film follows Muraki (Ryô Ikebe), a low-level thug who has just finished serving a lengthy prison term. After so long away, he has to reconnect to the underworld, which he begins seeking out by embracing his old gambling habits. At one of the illegal spots he frequents, he meets and falls for hotheaded femme fatale Saeko (Mariko Kaga). Attracted to each other vices as much as anything else, Muraki and Saeko start up a chaotic and toxic dynamic that spins them out into the bleakest corners of yakuza influence. Pale Flower plays like it walked right out of the film noir golden age, but peppered with Shinoda’s distinct flair.

Leaping decades ahead to finish off the group, L.A. Confidential is one high point of the 1990s, a decade that hosted an explosion of deliciously twisted neo-noirs. Adapted from noir novelist-extraordinaire James Ellroy’s book of the same name, the Curtis Hanson-directed crime epic is a sweeping look at the corrupt and grimy 1950s Los Angeles. Initially separate stories about crooked cops, sex workers who look like movie stars, and a brutal massacre gradually entangle through the actions of three LAPD officers. With an unbelievably stacked cast that includes Russell Crowe, Guy Pearce, Kim Basinger, and David Strathairn, L.A. Confidential is a classical film noir filtered through modern sensibilities with the full backing of a major studio bankroll. Hanson and company manage to preserve the postwar cynicism while inflecting the snaking story with just a glimmer of hope. It’s a neo-noir masterpiece, plain and simple.