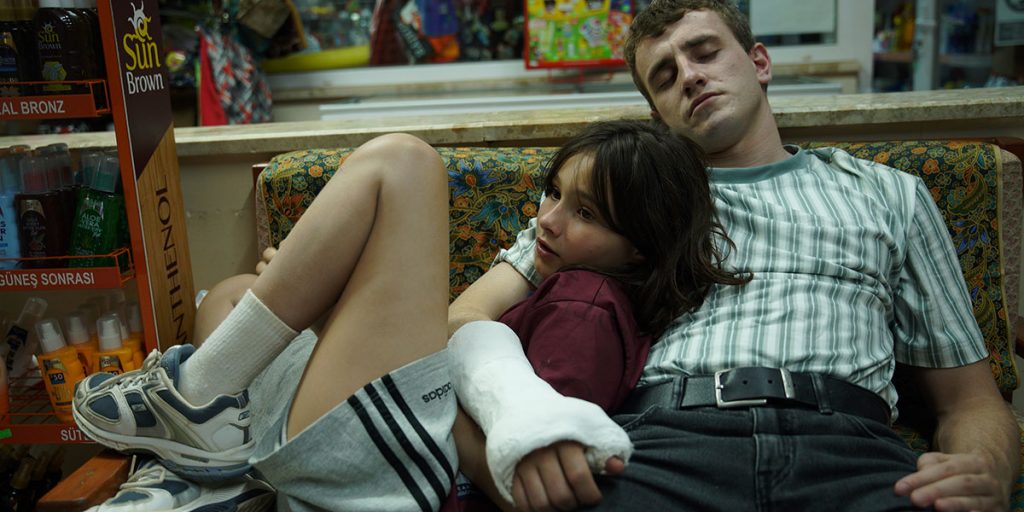 What is a memory? What does it mean to us as we get older? How important is its accuracy?

I don’t typically ponder these questions during my regular day, which is ironic. Memories, especially the quality of their capture, have become central to our collective social language. Memories are currency; social media companies have made fortunes convincing us to preserve our memories on our feeds or offer tempting glances that disappear after 24 hours. Memories matter more than ever, so why not explore their value?

With Aftersun, director Charlotte Wells seeks deeply personal answers to these questions. Her first directorial feature follows the semi-autobiographical memories of Sophie (Frankie Corio as a child, Celia Rowlson-Hall as an adult) and her vacation to Turkey with her father, Calum (Paul Mescal). Calum is about to turn 31 and is struggling with his mental health. However, he tries to give Sophie the best experience he can, knowing their time together is woefully short. Sophie is often fully in the moment, playing pool with her dad, swimming in the pool, riding an arcade motorcycle with a boy. Other times, she senses her dad isn’t quite right.

Wells’ direction of Aftersun intentionally complicates what could’ve been a straightforward father-daughter holiday. Rather than following a traditional linear narrative, Sophie’s memories bounce between locations and vary time lengths. There are brief glimpses and extended moments. Wells will revisit a shopping trip for carpets from different perspectives, while lingering on Calum moving fitfully in the moonlight. At first blush, Wells’ choices seem strange and besides the point. Calum and Sophie are a precious pair, with an easy camaraderie and tenderness that envelops you. Shouldn’t Aftersun follow their lead, I wondered at first.

The intentions become crystal clear as the film unfolds with an atmospheric lyricism. She intercuts Sophie’s variable recollections with present-set scenes of Sophie at a dimly lit party, her father dancing amongst the pulsating lights. These moments not only ground us in the reality that Sophie is remembering the past, but that newer information and context might be influencing her memories. How else would Sophie know about Calum’s solo visits to the carpet store, or his self-injuries? A 10-year-old couldn’t know these things, right?

And yet, Sophie’s memories – imagined or otherwise – feel truthful. Aftersun sings with authenticity in Calum and Sophie’s relationship and how Sophie chooses to remember it. The film’s most remarkable and innovative aspect is the different forms the memories take. Sophie’s video camera provides a first-person account of their adventures through a grainy but charming ’90s lens. When Sophie’s memories require more direct involvement from her, Wells experiments with the relationship between visuals and sound. Her camera focuses on a specific image – a Polaroid, the surface of a mud pool – instead of Calum and Sophie. It’s a quietly powerful way to demonstrate how memories don’t need to be perfect recollections to matter.

Wells also grants Calum and Sophie a degree of privacy, keeping us from something deeply personal. One of Aftersun’s strongest scenes reimagines and extends its opening scene when Sophie asks Calum about his life at her age. The camera focuses on the mirror and the television, offering two slivers of images of our central pair. We can’t quite see Calum struggle to answer Sophie’s seemingly innocuous question, but we can feel his vulnerability just the same. The grace of that moment, and the film as a whole, is profoundly moving.

Aftersun’s graceful, inventive direction allows Paul Mescal and Frankie Corio to shine as Calum and Sophie. Corio is a true find, never delivering a false moment, even when facing complicated emotions or situations. She avoids the child acting pitfalls of precociousness or brattery, focusing on delivering a natural performance. She couldn’t have a better scene partner than Paul Mescal, a masterfully naturalistic actor. He’s also brilliant in conveying the physical rot of mental health struggles. Mescal does that here with even sharper physical detail than in his breakout performance in Normal People. Mescal and Corio are a heartwarming pair of gentleness, mischief, and genuine care. Their chemistry ranks amongst the best you’ll see this year.

Aftersun challenges you in the best way. With the dynamic duo of Paul Mescal and Frankie Corio in front of her, Charlotte Wells reimagines how a film can present memories. She pushes you beyond the conventional to a unique place where memory might be more than we regularly consider. For Wells, a memory can deepen how one understands their parents, acknowledging and celebrating their complications. It’s not the most intuitive use of memory, which makes Aftersun so special.

Aftersun had its North American Premiere in the Contemporary World Cinema section of the 2022 Toronto International Film Festival. The film will debut in theaters beginning October 21, 2022 courtesy of A24.