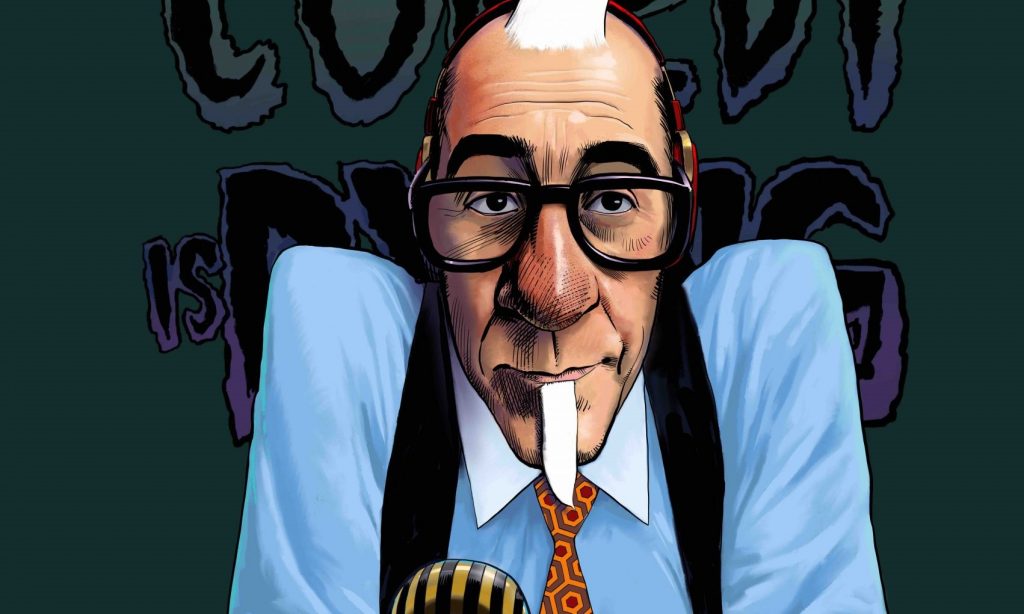 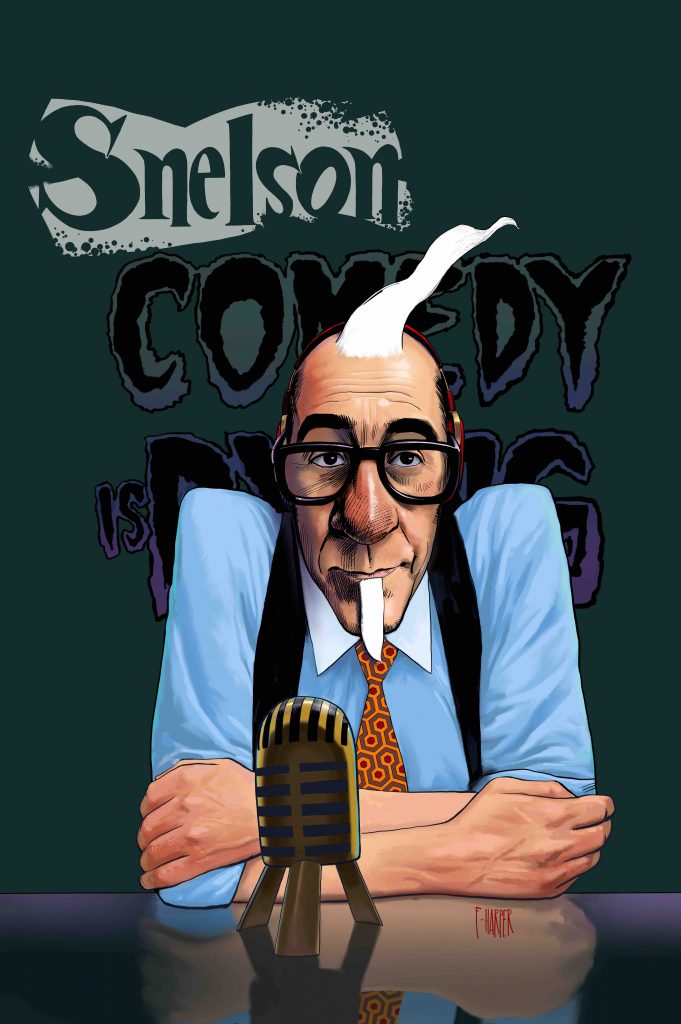 When we last left Melville Snelson, he had just received some bad news from his Doctor right before his set. With these thoughts fresh in his mind, he decided to alter from his normal comedy set and start telling his audience what he really thought. Of course, speaking his mind has never been a problem for Melville. Does it possibly CAUSE problems? Sure, but that’s basically a rite of passage in the comic’s game. If you are not ruffling at least SOMEONES feathers, you are probably not being listened to. So, Snelson let his audience know that Comedy was Dying and it was up to him to save it. One performance at a time. But how could he get his message to the masses outside of his comedy sets? Might as well be like everyone else in the world these days. It was time for a Podcast.

The “Comedy is Dying” Podcast

So Snelson brought his theory’s about comedy to the streaming stratosphere. Bringing in former comedians as guests, who like him, had suffered the indignity of seemingly being culture cancelled. Just because their thoughts were no longer considered the accepted norm. Well screw that! He would not be silenced. Plus, he had attracted a supporter for his cause: Lynzi Irwin. She was a producer, director and “journalist” who specialized in publicizing the cases of those she felt that today’s cancel culture was targeting. And Snelson recently had a giant target painted on his back. Besides, he would give her just the kind of attention she craved. Any Kind! With her plans set, she would make her next film about Melville.

And Now, A Word from Our Sponsor

First, Lynzi decided to sit in on one of Snelson’s Comedy is Dying tapings to see why and how he was being victimized. She asked Calvin Tatu, who was producing Snelson’s podcast, and is a comic himself, how this all came about. Calvin explained that when Snelson changed up his routine and started doing his Comedy is Dying bit, audiences started growing. He had apparently tapped into something that people identified with. It was then that he asked Snelson if he had ever thought about doing a podcast. That got the ball a rolling. soon Snelson’s Comedy is Dying podcast began to get popular and he attracted some sponsors. Great products like BratBox (Home of the ONLY Bratworst  Subscription Delivery Service) and Postage Dot.Net.

As Lynzi started asking about Snelson’s story, she found out from Melville what had happened to him that derailed his initial success. He explained it all stemmed from a young lady he was dating when he was 23. Come to find out his lady love was only 17. Once the public found out about that, (through a reporter named Danica Bakshi) he was immediately labeled a child predator. After that, all of his previous success went by the wayside. The possible sitcom pilot? Gone! Endorsements?? Dried up!! One mistake as perceived by the “public” and he was on the outside looking in. Only now, were people once again starting to pay attention to him. Comedy is Dying had reenergized his fan base. At least the ones that craved anything that took it to the man!

Along the way, Lynzi spoke to the reporter that broke Snelson’s transgression. However, Danica Bakshi was more interested in talking about Lynzi and her viewpoints. Needless to say, Danica had issues with Lynzi’s type of journalism. And poor Lynzi wasn’t prepared for the onslaught. Although, she can’t say that Snelson didn’t warn her about talking to Danica. After Snelson consoled her and her hurt feelings,  she went back to work on Snelson’s story. Which meant filming another podcast. This particular show was supposed to have special guest Anziz Ansari. At least that is what they had thought.

But come to find out, the guy who claimed to represent the actor had lied about the whole thing. So no Anziz Ansari. Considering that Lynzi was going to film this big show, that wasn’t good. But you have to hand it to Calvin and Melville, they played it cool. It was HUGE smiles all around as they tried to figure out what to do and most importantly, what to tell Lynzi. They decided that they would claim that Anziz had cancelled at the last moment due to ummm … illness. Yeah, that’s it! But Calvin filled the space by inviting a fellow comic from their comedy tour, Avigail Sapperstein. Who, as luck would have it, was Calvin’s girlfriend. Much to the surprise of Snelson after he started disparaging her. He apparently doesn’t pay too much attention outside his own circle.

So Avigail came on and not only brought it to Snelson, but also to poor Lynzi who once again was assailed for her so called “journalism.” But after she was done roasting Lynzi, she went back to Snelson. What she really wanted to know was what did Snelson have against being successful. He could have just played along with the powers that be, doing his comedy his way and he would have no doubt been successful. Would people hate what he had to say? Absolutely! However, they would still listen. But he couldn’t leave well enough alone. In fact, their own comedy tour was doing pretty well but he blew that up too. So basically, what Avigail wanted to know was, what was Snelson’s deal? What had gotten into him?

Snelson answered her straight and to the point. Cancer. The rectal variety. He started treatment next week. There’s a chance it can be cured, but there’s also a chance it could kill him. His friends were stunned…and silent. Talk about letting the air out of the room. Not that Snelson let THAT stop him. The sponsors copy must be read. Especially for their new sponsor “Wonder Undies.”

There is old adage that opinions are like noses, everybody has one. This is never more true than in today’s society where everyone’s actions and thoughts are under scrutiny like never before. Especially if you are anything close to a celebrity. Such is the power of social media. Now, anything you might have said or done, whether it be recently or in the past can come back and bite you in the ass.  TMZ is watching. In fact, they should use Roz’s line from Monsters Inc. “We’re watching you, Snelson. Always Watching!” Is this unfair? Depends on who you ask and what their agenda is. This is the world Melville Snelson and everyone else lives in now.

It is also the world that writer Paul Constant and artist Fred Harper are exploring through the eyes of Snelson and they are killing it so far. Examining the whole concept of free speech and when those boundaries are considered crossed through the various characters. In this issue through Snelson, Lynzi Irwin, Danica Bakshi, and Abigail Snapperstein. Each with their own idea of what “cancel culture” is and what should be considered free speech or off limits. Bakshi and Snapperstein especially bring it hard. Great stuff. They also show that life’s cold hard realities (such as Cancer) can put such debates in perspective as far as their importance goes.

Artist Fred Harper works his erstwhile magic on this issue with some notable visible brilliance. Especially in the scene where Calvin informs Snelson that Anziz Ansari is not going to be on their show. As they are trying to cover their discomfort and embarrassment that their announced guest never was coming, Harper exaggerates their smiles…to great comedic effect. No way anything can be wrong if you’re THAT happy. Harper’s command of the panel and unusual and sometimes in your face panel work is uber-storytelling and so invocative of Snelson’s frame of mind at this juncture. You should check it out for that alone.

I would be remiss if I didn’t mention the great cover work on the issue with Harper’s homage to the late Larry King (see at the top) and the Sergio Aragones variant (below) that is vintage Sergio. Check out the audience and their attention span. 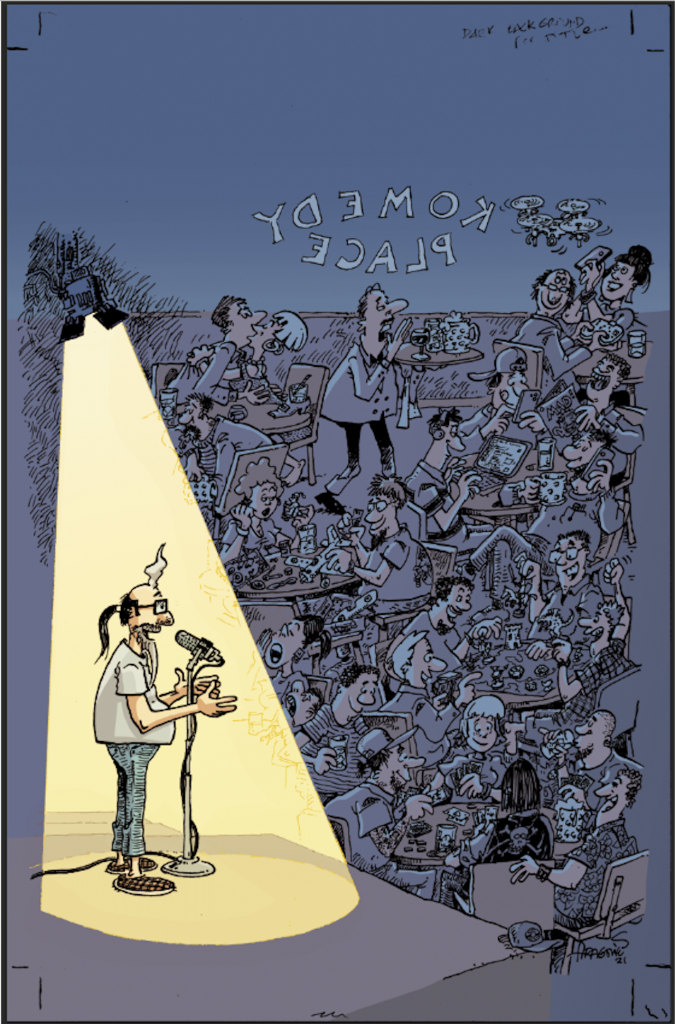 Ahoy Comic’s Snelson: Comedy is Dying Issue #4 comes out September 8th where all great comics are sold. And as always, check out the extra prose that Ahoy includes with every issue.