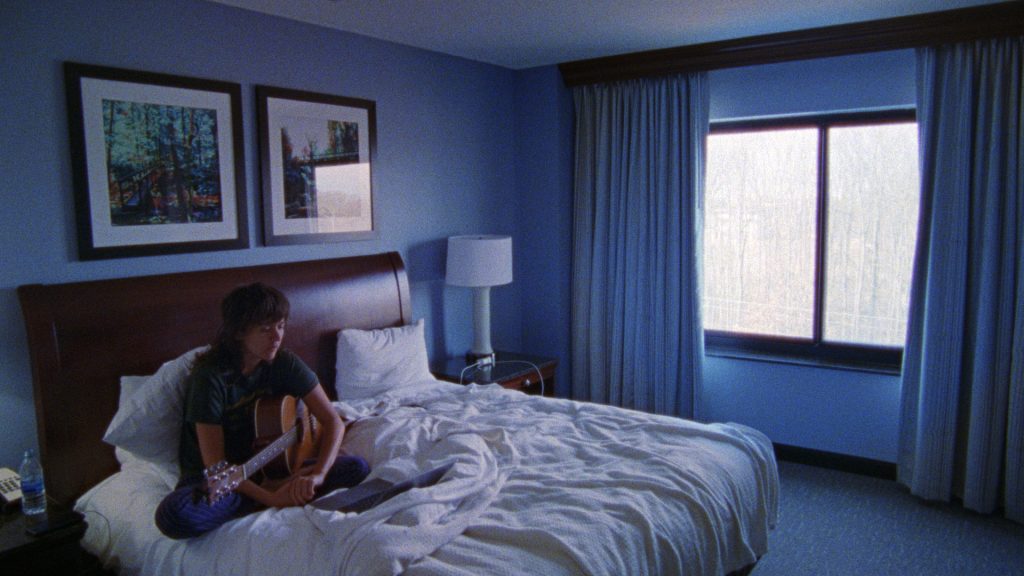 Anonymous Club is a wonderful portrait of Courtney Barnett in a world she simply can’t pretend to exist in comfortably. For those unfamiliar with Barnett, she has a style of songwriting that is best described as dry, witty and deadpan in delivery in the singing of her songs, usually backed by a full band behind her, or just  singing over herself playing acoustic guitar.

Some sort of ineffable curiosity in Barnett compels her to write, sing, and explore her own feelings, but in a world where singer-songwriters are expected to bare all and make each song deeply personal or have some earth-shattering resonance justifying their existence. Barnett admits to having no grand plans whatsoever, her music is messy because her life, life as she knows it, is messy. The documentary itself addresses crippling depression, debilitating panic attacks, and anxiety right away from a video recording of a radio interview. Barnett, just like any of us, can’t simply offer any enlightenment on why she chooses to focus on feelings like this for some of her songs when prompted. It’s ultimately a question without a definitive answer (and even if she was also a therapist it would mostly be speculation). She probes these existential questions because she lacks the enlightenment required to understand it, just like us, who suffer from depression’s myriad inexplicable & immobilizing throes.

And within the pantheon of singer-songwriters that share cultural impacts similar to Barnett, all of them deal with these issues on extremely different levels of intimacy with their adoring public as well as in private. Since the subject is so hard-hitting (or perhaps because of it), there is a feeling of therapy in chronicling and having chronicled her own struggles step by step as Barnett herself narrates via dictaphone, while clips play of her writing, singing, or sitting. But then Anonymous Club‘s therapeutic essence bleeds into the audience as organic and as natural as conversation would reveal that they may have more in common with Barnett’s personal anxieties & depression surrounding her image.

The lens of societal anxiety is just as fascinating as our view through the 16mm lens used to shoot Danny Cohen’s portrait of Barnett the artist. As a piece of technology, any method of film can show anyone just as equally or relatably capable as another on their exterior. While documentaries about artists tend to lend a visual style that resembles the persona their work gives off, Cohen’s use here of grainy film lends Barnett an unprocessed & raw visual honesty about herself, where you see and hear her talk about brutal reactions to her music, real or imagined, immediately knowing it’s genuine as it happens, not for a second considering it to be manufactured drama. The use of 16mm film as a visual medium helps the audience bridge a gap rather than stick out as merely kitschy, making Barnett more easily understood and not mislabeled as aloof. This feature has decidedly been crafted as a physically tangible and fragile medium, containing some of the most important questions asked and lessons learned by Barnett, as well as whatever overlap her fans and the audience of Anonymous Club occupy.

As we follow Barnett in her own musings, the same ground is circled on over and over. It’s curious at first why we follow in succession with her revisiting the same woes and fears again and again, but as Barnett realizes the cycle she’s been caught in, so do we as the audience realize her progress by closely following her. There’s a shared catharsis once the cycle is broken, as Barnett looks back on her patterns and decides to break free from them. There’s a true feeling of freedom that comes from this that is immediately relatable to us. Sometimes it comes in the form of self-realization, but sometimes others can remind you of what you’ve said (or sung) before to help keep others focused, not noticing that you needed that comfort or advice for yourself. In the opening of the film, a fan talks to Barnett and explains how far he had traveled just to see her show, ecstatic to meet her, but intent on getting her lyrics written on the back of his t-shirt:

Anonymous Club comes highly recommended if the music of Courtney Barnett speaks to any part of your conscious, subconscious, inner dialogue or incessant overthinking brain.

The film opens theatrically in New York and LA on July 15th, with Courtney Barnett scheduled to appear in-person. The complete list of theatrical presentations courtesy of Oscilloscope Films can be found here.

'Anonymous Club' is a sobering and cathartic portrait of Courtney Barnett, rubbing against & breaking through societal stigmas of depression.