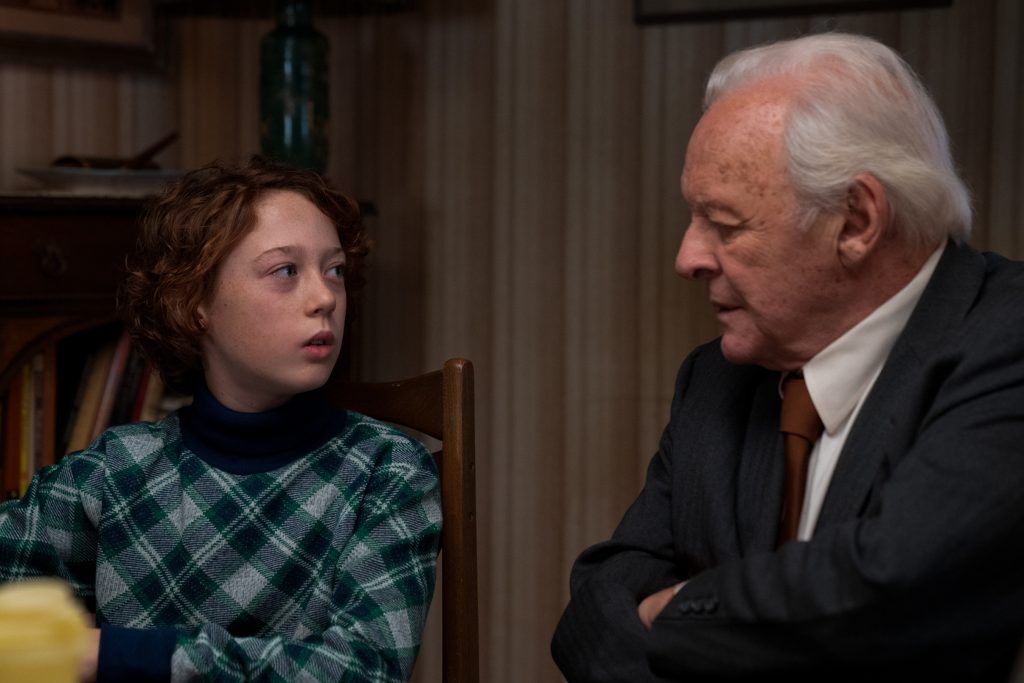 Armageddon Time is a tale of two (New York) cities.

More specifically, the film is a tale of two distinct experiences set in one Queens neighborhood, inspired mainly by writer-director James Gray’s childhood. One belongs to sixth grader Paul Graff (Banks Repeta), an aspiring artist in a Jewish household that wants more educational rigor from him. Paul is disruptive and unfocused in class at his public school, but his teacher regards him as a harmless nuisance. It differs greatly from Johnny (Jaylin Webb), a troublemaking Black student. The teacher is significantly harsher, implying and outright saying he is stupid and useless; Johnny responds in kind.

Paul and Johnny soon form a bond, but several factors complicate their friendship. Paul’s parents, Esther (Anne Hathaway) and Irving (Jeremy Strong), struggle to rein in their rambunctious son, relying heavily on his close relationship with his grandfather, Aaron (Anthony Hopkins). There are concerns within the family that subpar public school education is harming Paul’s chances at a successful future. (Grandmother Mickey, played by Tovah Feldshuh, lays some blame on the influx of Black students in the school system.) After their teacher catches Paul and Johnny smoking a joint, Irving and Esther enroll Paul in a neighborhood private school. Here, the differences between Paul’s and Johnny’s tales are starker. Paul learns on the fly whether or not he can bridge the gap while also trying to find his place in a world and family marked by upheaval.

For such a personal film, Armageddon Time is brimming with ideas about the world around us. Set in the days leading up to Ronald Reagan’s 1980 election as the U.S. president, Gray tries to survey the circumstances of that sociopolitical shift. He finds that racism, even in a liberal stronghold like New York, exists beyond personal failings. It is a systemic problem exacerbated by governmental neglect of diverse neighborhoods and an elitist mindset that privilege and advantage are myths. Teachers and police officers worsen the situation by assuming the worst of Black children like Johnny, when they should be educating and protecting them. The reality of two cities has lingered, if not increased, in the last 40 years.

Armageddon Time also grapples with complex relationship dynamics that occasionally intersect with its social themes. Paul’s relationships with Johnny and Aaron are exceptionally close, fortified by their affirmations of his artistic ambitions. They provide an outlet for him that his parents can’t. However, those relationships are shaky in their own right: an unwell Aaron has limited time left, and Paul doesn’t know how to reciprocate Johnny’s support at first. When you factor in Paul’s abusive relationship with his parents, the film has stretches of fertile emotional ground.

It’s too bad that Gray stretches himself too thin. For all of its compelling ideas, Armageddon Time struggles to serve it all satisfyingly. Paul and Aaron’s relationship is the film’s strongest part, a heartwarming display of how personal validation is a powerful way to encourage bravery and positive change. Their connection is wonderfully brought to life by Anthony Hopkins’ forceful presence and his excellent chemistry with Banks Repeta. Given the film’s other priorities, their story doesn’t encompass nearly enough space.

Paul’s relationship with Johnny holds more space, but Johnny’s limited character development weakens its potential. We don’t see enough of Johnny’s experiences to forge a strong connection (and frankly, Paul doesn’t either). We get but one glimpse of his relationship with his elderly grandmother and none of his life outside the school. Meanwhile, Paul’s communication struggles leave few chances to know Johnny’s feelings fully. For all his narrative importance, Johnny feels disposable for Paul’s benefit, to support his development. As it were, Johnny is sacrificed for Paul’s development, with little examination of the racial implications.

Johnny is just one example of Armageddon Time falling short in its racial commentary. Gray has a clear point of view about structural racism. He lays out the inequities built into the U.S. education system and acknowledges how race plays a significant part. He also plainly demonstrates how race affects Johnny and Paul’s places in their community. However, the film’s examination never cracks the surface. It doesn’t interrogate the shoddy state of public education and how the casual racism on display reinforces it. It doesn’t push back on the teachers and police and even the family members who regard Johnny so coldly. Instead, the film buries the conflict in the footnotes of Paul’s story. Paul can’t unpack it, and there is no character to guide or challenge him. It stays buried.

Armageddon Time is also about family, although it’s difficult to assess where it lands amongst the film’s long list of priorities. Gray’s discomfiting approach to the family’s dynamic deeply undercuts it. The film’s first stretch presents the Graff family as a dysfunctional but fine household, perhaps too controlled by Paul’s rambunctiousness. There are plenty of laughs, and it seems like this will be a heartwarming but socially conscious drama.

Before the first act ends, Gray disrupts that assumption with a shocking act of physical abuse that fits uneasily with the preceding comedic leanings. (During my screening, residual laughter occurred during the assault.) The film never fully recovers from that moment’s narrative and tonal whiplash. It contextualizes Paul’s unhappiness but casts a pall over everything that follows. Any subsequent laughs leave an itch. Esther and Irving are flattened as characters, leaving both Anne Hathaway and Jeremy Strong with the unenviable task of finding empathy for them. Neither find a solid equilibrium within the overtaxed script, although they have excellent moments that are typical of their skill.

Armageddon Time spends its runtime bouncing between its tales of two cities. You can understand why: there are many compelling themes and stories to explore within them. James Gray has much to say but not enough room to say something transformative or insightful, especially about race and racism. Well-intentioned as they may be, those stories would’ve been better served if he stopped bouncing and took a breath.

Armageddon Time was viewed in the Main Slate section of New York Film Festival 2022. The film is scheduled to be released in cinemas beginning October 28, 2022 courtesy of Focus Features.

An Uneven, Overtaxed Dramedy About Family and Structural Racism