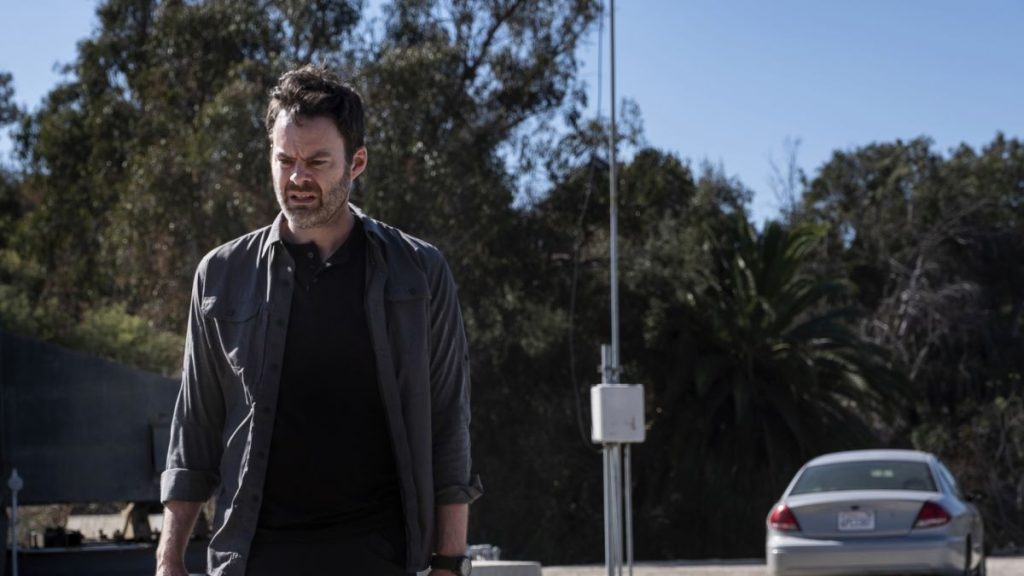 The short of it: A plot-loaded premiere finds our leads in a variety of dark places, and clarifies that this season will be one of new frontiers and desperate plays for hope.

Barry (Bill Hader) is back, and so are the confounding issues from his double life as an aspiring actor and a ruthless hitman. In the season 2 finale, long-gestating potential complications erupted into a string of paradigm-shifting developments. Fuches (Stephen Root) opted to fully commit to screwing Barry by taking Gene (Henry Winkler) to see Detective Moss’s (Paula Newsome) body. Fuches tells Gene that Barry killed her before he dashes away. Barry didn’t take it lightly and mounted a one-man massacre at “the Monastery” that both sent Fuches into hiding and decimated Hank’s (Anthony Carrigan) operation. Away from the violence, Sally’s (Sarah Goldberg) big swing with her somewhat true-to-life tale of surviving abuse has set her up for the success she’s long lusted after. In essence, everyone ended up staring back at a point of no return.

Therefore, “forgiving jeff” picks up an undetermined number of months removed from the blood-soaked domino effect of the previous finale. The episode opens with a dead-eyed Barry in the middle of a hit, his decision made to strike back out into the “business” as a free agent. In a deliciously dark twist, the cuckolded-husband client changes his mind about Barry killing the eponymous and philandering Jeff at the last moment, forcing the angry Barry to shoot them both. Apart from rapidly re-establishing the series’ dark comedy, Barry shouts a line that comes to serve as an underpinning thesis for the premiere; “There’s no forgiving Jeff!” He’s only the first character to reference forgiveness, a word that every top-billed performer from Winkler to Carrigan utters before the closing credits.

From that ungodly entrée, “forgiving jeff” cycles through a series of table-setting check-ins with each of the other major players. Sally is the lead on the TV show “Joplin.” The specifics of the story are opaque, but the broad strokes clearly lay out her character as an abused mother looking to help her troubled daughter, played by new addition Elsie Fisher. In a truly stunning turn of events, Sally has brought Natalie (D’Arcy Carden) along as her assistant. Always pining after a shot at being in the room, Natalie is already taking ego shots from Sally, who at one point tells her “not to talk” in any meetings. Back at home, Barry and Sally are clearly on divergent paths of happiness and success. Barry is schlubby, depressed, and seemingly back at the point where he started the series while Sally rockets towards a proper career.

It would be one thing if Barry’s criminal life was thriving again, but the guy is taking it from both sides. After Barry wrecked his whole world, Hank wants nothing to do with his former buddy. Living in the hills with Cristobal (Michael Irby), who he is officially “an item” with, Hank has stepped into the master manipulator position and has no time for Barry’s desperation. During a police interrogation, Hank sets the pieces up to hang the whole massacre on Fuches, who is currently hiding out with some goats and non-verbal security guards in rural Chechnya. Doubling down on the general A Star is Born vibe, Hank is rising alongside Sally as Barry plummets towards a dark, lonely, existence. For all the clawing and scrambling Barry has undertaken to set up a new life, the chances of long-term success are not in his favor.

The only man possibly feeling worse than Barry is Gene. Det. Moss, the love of his life, is now long-dead. Gene may be moved in with his son and grandson, but he is also closing his acting school because he cannot bear to go on with it. Plus, no matter what he tells the cops, no one will believe him that Barry is the killer they want. Gene has always possessed a certain glimmer in his existence, a jovial narcissism that makes him my personal favorite character on the show. There’s none of that here. He is cold, angry, and out for vengeance, an inclination that leads him to load a gun that Rip Torn gave him and invite Barry to help “pack up” the school. Of course, Gene is no killer, so his attempt to pull the gun and force Barry to turn himself goes comically wrong.

When Barry visited Hank, the latter told him that “forgiveness must be earned.” Following Gene’s actions, Barry takes him out to the same desolate field where he killed the husband and Jeff and prepares to off Gene. But when Gene says he “forgives” Barry, it triggers something in the man that leads him to pack Gene into the trunk and promise he will “earn” his former teacher and friend’s forgiveness. All bets are off on how exactly Barry intends to do this, but the closing moments clarify Barry’s central issue for the season; atone to Gene and earn back a sense of self-worth he currently lacks. Paired up with Sally and Hank’s rising stars, “forgiving jeff” establishes a high-tension kaleidoscope of overlapping interpersonal dynamics that will no doubt push all of these people to a breaking point. It certainly feels that there will be carnage, physical and emotional, ahead.

“forgiving jeff” allows each of the remarkable cast members their moment to shine, but the real star of this plot-heavy premiere is Hader’s exquisite direction. Within the 29-minute runtime, he pulls off a sequence of stylistically daring and poetic scenes that reveal how much he has grown as a directorial force since the first season. The standout for me is a tracking shot that follows Sally as she enters her show’s backlot, and traces its way through the various sets and interactions with crew until she makes it to her scene and dives in. It’s breathlessly choreographed and conveys everything we need to know about Sally’s new normal as an actress with real sway. It also lingers on a moment of pitch-black shadow when Sally exits the last set before her destination. Framed by a haze of red light, she is reduced to darkness. Then it’s showtime once again.

This amount of table-setting is somewhat inevitable in a season premiere, but it nonetheless leaves me excited to dive into the rest of the season and actually see how the creative forces behind Barry play with the sandbox they’ve spent two previous seasons populating. We have as much history with these characters as they have with each other, and even with the breakneck narrative, it’s easy to feel the shorthand the actors have for the interlocking dynamics onscreen. I was already screaming “No!” at the end of this one when it looked like Gene was done for, so if the goal of “forgiving jeff” was to get viewers’ pulses racing, consider it a resounding success. Only time will tell if I have it in my heart to forgive them for that spike in my blood pressure.