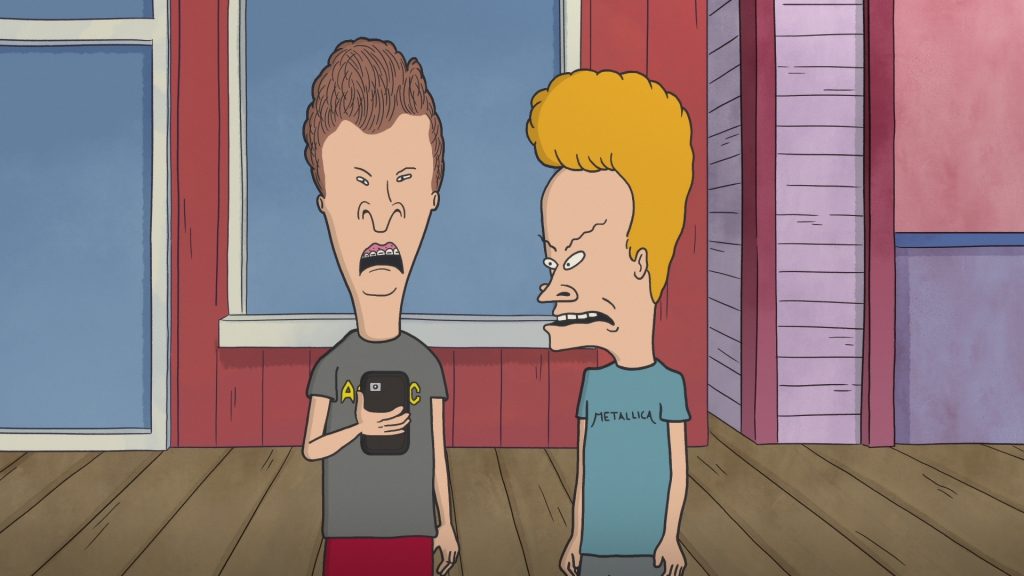 Plot Summary: After Beavis and Butt-Head destroy a science fair, a judge inspired by the television show Touched by An Angel sentences them to space camp in order to get them on the right path in life. In a move to beef up their PR for NASA, it is decided that the stupid comedy duo be launched into space. Through a series of whacky misadventures, the two travel 24 years into the future, to fulfill the quest to score, despite government agents on their tail.

Flashforward to 2022 and it’s been a great time to be a fan of the crude, rude animated show, with the original show now on Paramount Plus, the 1996 feature film Beavis and Butt-Head Do America was released earlier this year on Blu-Ray and now a brand-new feature film. So much has changed since the dimwitted duo quietly exited the pop-culture zeitgeist back in 2011. As an original fan of the show, I was very curious what a modern Beavis and Butt-Head film would look like in a very different cultural landscape. I am happy to report that Mike Judge is firing on all cylinders with Beavis and Butt-Head Do the Universe.

Similar to the much beloved cult classic Beavis and Butt-Head Do America, Do The Universe feels like a classic episode stretched out to feature length with the moronic pair constantly failing upwards. Judge’s sly and sardonic humor never fails to get a laugh. I also love the meta-jokes such as the blink-and-you’ll miss it reference to Judge’s other landmark show, King of the Hill. Other topics like government overreach and white privilege are savagely lampooned. Amazingly, Judge’s humor here never feels like it punches down, nor does it feel like it’s being edgy for edge-lord’s sake. But rather, like any great satire, it’s absurd and makes a sharp critic point.

Because its Beavis and Butt-Head, it also throws in a ton of poop and sex jokes for good measure. It’s this balance of fast-paced jokes, visual gags and tightly constructed plotting that takes a paper-thin premise and does something really special. The movie is also littered with inside-jokes and references that will keep lifelong fans of the series happy. It’s impressive how smartly written this is, considering it’s about perhaps the dumbest cartoon characters ever created. A fantasy scene with Beavis and Butt-Head’s love interest riding a horse, beheading Beavis’ bullies, such as Todd, was truly a hilarious highlight.

My biggest issue with this movie is, with all the deeply strange stuff going on in our real world, Judge could have gone a lot further with mocking current events. After all, it sets up that Beavis and Butt-Head time travel, and we see what a completely different world it is from how it was in 1998, the year the opening scene takes place. And, sure, there are some great gags with iPhones and Insta-Paying for things, but oddly it has nothing to say about current politics. Hell, even a bit of self-parody on streaming services would have been great. In some ways, it feels very safe in that regard, with the above mentioned white-privilege scene feeling like an outlier, as it’s the most overt social commentary we get. Despite this, I thought Beavis and Butt-Head Do the Universe is a damn fun time and well worth watching.

Do The Universe proves that Beavis and Butt-Head are back in a big way. Do The Universe is as funny as it is crude and smartly written. A comedy that truly does score!

Beavis and Butt-Head Do the Universe will be available to stream on Paramount+ beginning June 23, 2022.

Do The Universe is as funny as it is crude and smartly written. A comedy that truly does score!