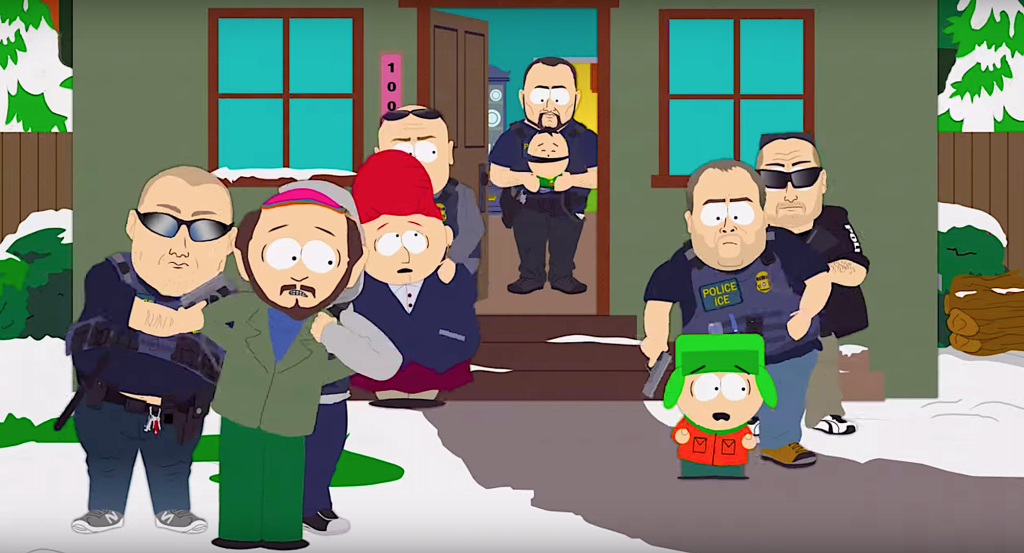 After more than twenty years on the air, South Park has gotten to a point where it would be reasonable to expect the show to coast a bit since they have tackled so many subjects. Viewers will tune in week to week regardless to see what taboos Cartman, Kyle, Stan, Kenny and the rest of the Colorado residents will confront. In its twenty-third season, creators Trey Parker and Matt Stone keep the show fresh by continuing to experiment with the serialized story arcs that they have been playing with for the past few seasons, along with broadening the focus a bit more from the core group of the four kids. These elements mixed with a production schedule that keeps the show incredibly relevant has provided an absolutely hilarious season of television that remains as biting and irreverent as ever.

A large portion of this season finds the show continuing Randy’s Tegridy Farms storyline that began in the previous season. As Randy continues to grow his marijuana business, we see the show tackle lofty topics such as businesses catering to China and its impact on creativity, as well as the rise of plant-based meats. The guys are more than happy to ridicule all sides of the political spectrum while providing huge laughs. When you have an episode where you have Mickey Mouse slapping Thor and telling him to “shut the fuck up”, you know you have a good episode of television. Outside the world of Tegridy Farms, you have the boys dealing with ICE detention centers and the looming threat of “Mexican Joker,” musical biopics, the streaming wars, the anti-vaccination movement and many more ridiculous scenarios. Not every single episode is an all time great, but there are always at least several moments per episode that will have you laughing out loud.

The twenty-third season of South Park was a year in which the show both celebrated its 300th episode while subsequently being banned in China. This is a show that has never been afraid to push the envelope, and the hits keep coming this season with topics ripe to mocked and satirized. This far into a shows run, you know if it is something that is for you or not. South Park is a cultural institution for a reason. It strives to remain timely and hilarious, which it continues to accomplish year after year. We could all use a hearty laugh in our lives, and South Park: The Complete Twenty-Third Season will definitely get you there.

South Park: The Complete Twenty-Third Season comes to Blu-Ray with a vibrant transfer that largely looks quite excellent. With a show that has been running for so long, you pretty much know what you are getting stylistically and quality wise. Colors are bright and bold throughout the season without being too nuanced due to the production style. This is an immaculately clear presentation free of any dirt or debris. Fine lines and details are crisp and maintained well without any bleeding. There is the occasional issue with banding in the background, but it is mostly not noticeable unless you are really looking for it. South Park maintains its visual style and sharp presentation for this latest season, which looks great on Blu-Ray.

The Blu-Ray comes with an appropriately lively Dolby TrueHD 5.1 lossless soundtrack. Dialogue is given priority in the track with a crisp, clear presentation in the center speaker that subtly creeps into surrounds during moments where different environments are being engaged. Music is incredibly immersive with stings accentuating certain scenes in the rear channels. There are multiple different theme songs throughout the season due to the various styles they are playing with, and all of them have a palpable energy in the speakers. The show employs a good use of environmental effects that are directionally accurate within the mix. All in all, this is an excellent audio presentation that suits the show well.

South Park: The Complete Twenty-Third Season continues to see the show experiment with its structure and delivers some truly hilarious, biting satire. The A/V presentation from Paramount Pictures Home Entertainment is quite excellent. Fans of the show should buy with confidence knowing that Matt & Trey have produced another memorable season that you will want to revisit often. Highly Recommended

South Park: The Complete Twenty-Third Season is currently available to purchase on Blu-Ray and DVD.