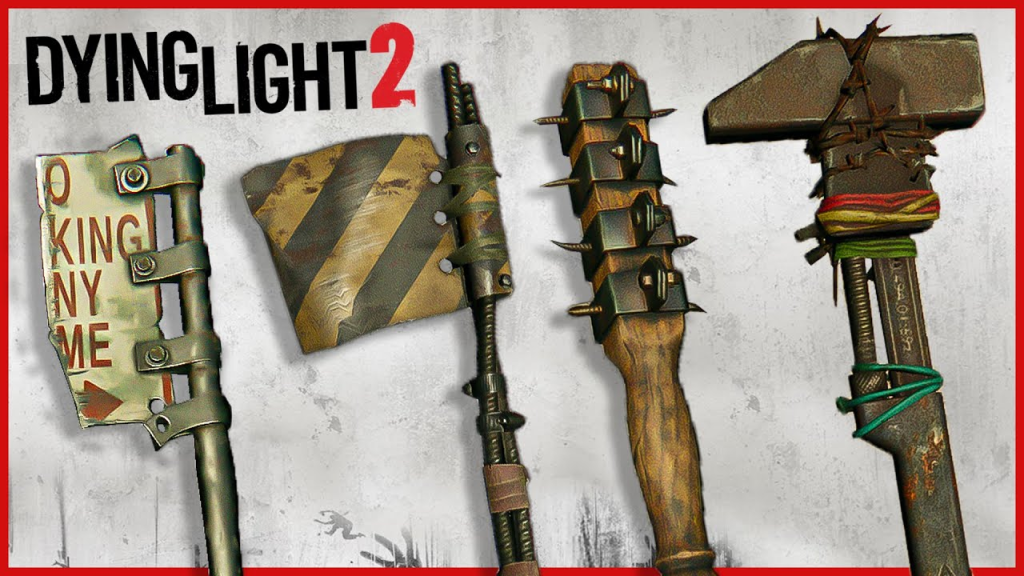 Dying Light 2 just came out recently and we are all hooked on it! The sequel to the critically acclaimed 2015 survival-horror zombie game is a world of its own. It takes place many years after the story in the original and things are not looking bright at all – humanity has entered its new ‘Dark Ages’. If you haven’t gotten your hands on it, make sure to get some Nintendo eShop Cards from OffGamers here to get the game and play on the go!

A new mutated version of the Harran virus created a bigger and faster outbreak than the first one and now 90% of the human population has been wiped out. Its last remaining survivors are now struggling to make a living in walled city-fortresses. If you already have your hands on Dying Light 2, you are well aware that traveling between the human settlements in the game is anything but easy and safe. It is quite hard to escape the hordes of zombies sprinting towards you, even with all the parkour and fancy moves Aiden, the main protagonist, has. Dying Light is not a game that will offer you a non-lethal approach like Dishonored or Fallout 3! The truth is that if you are not prepared and armed to the teeth you are a goner…That is why we are here to help you with the best weapons in the game that can help you clean your way out of zombies, escape in tough moments or simply delay the inevitable! 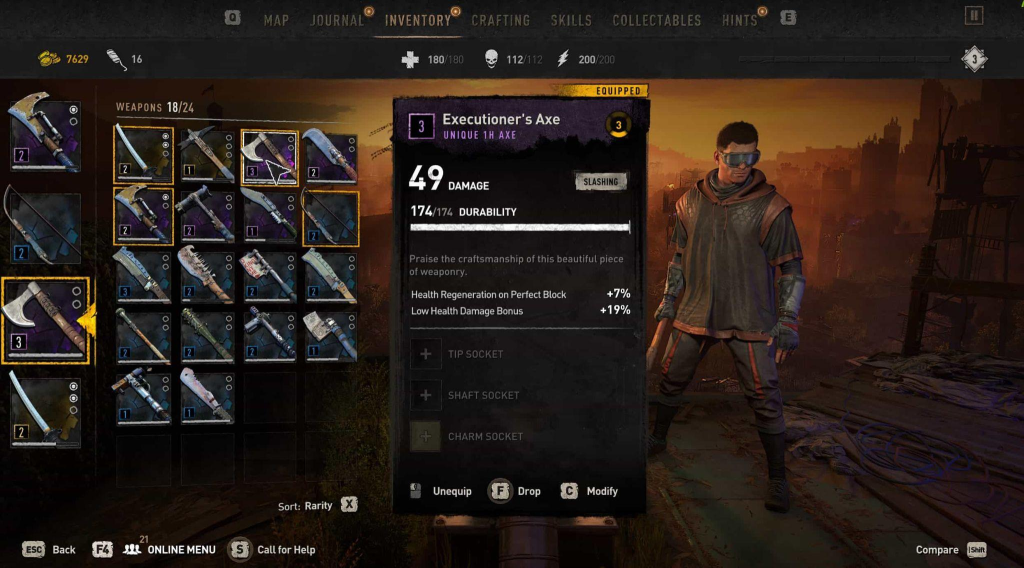 Even though it is a common weapon in the game this brutal axe is essential for your arsenal. It comes with two bonuses. The first one is 19% additional damage when you are on low health and the second is 7% bonus health regeneration if you manage to pull out off a successful block. It doesn’t matter if you are a Dying Light 2 newbie or a veteran, Executioner’s Axe will get you out of desperate situations. Executioner’s Axe is somewhat easy to be found in loot boxes scattered around. You can also alternatively purchase it from the trader in the “Welcome Aboard’’ story quest. 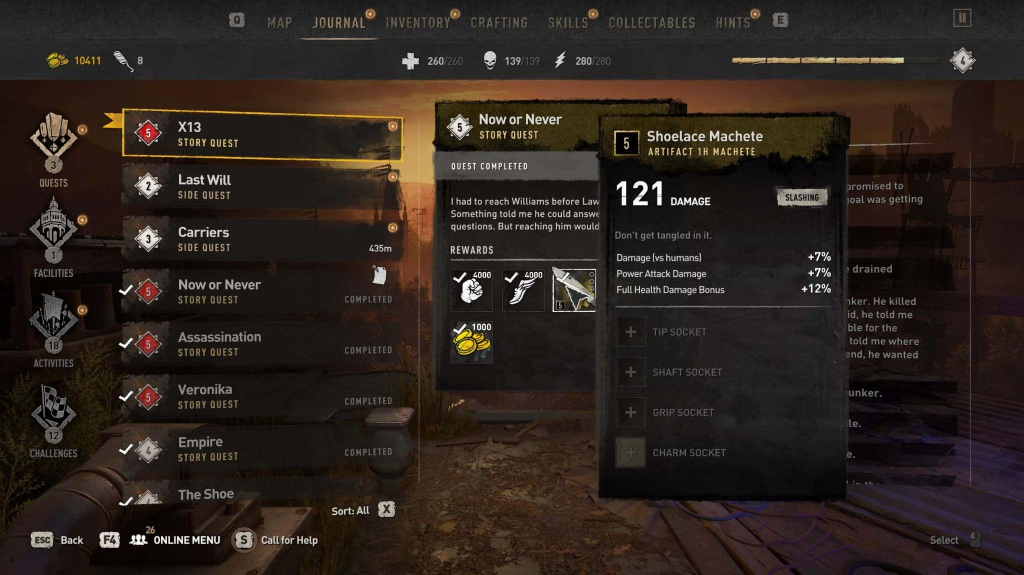 Hands down, the Shoelace machete is one of the strongest weapons in Dying Light 2. Just like making your way through a thick jungle, the machete is a great way to cut through enemies while also being quite striking (121 Damage/Slashing) and durable. It can be made even more powerful if it is combined with the vast variety of mods you can equip. You will have to wait until the late parts of the game to get your hands on it, but if you find one you should be saving it as your last resort, as it can definitely get you out of otherwise impossible situations. The Shoelace Machete will easily become your favorite once you see it in action. It comes with four sockets – Tip Socket, Shaft Socket, Grip Socket, and Charm Socket. The machete has +15% Power Attack Damage, +19% Stamina Regeneration on Power Attack, +6% Stamina Regeneration on Quick Attack. It is collected as a reward for the mission “Now or Never”. 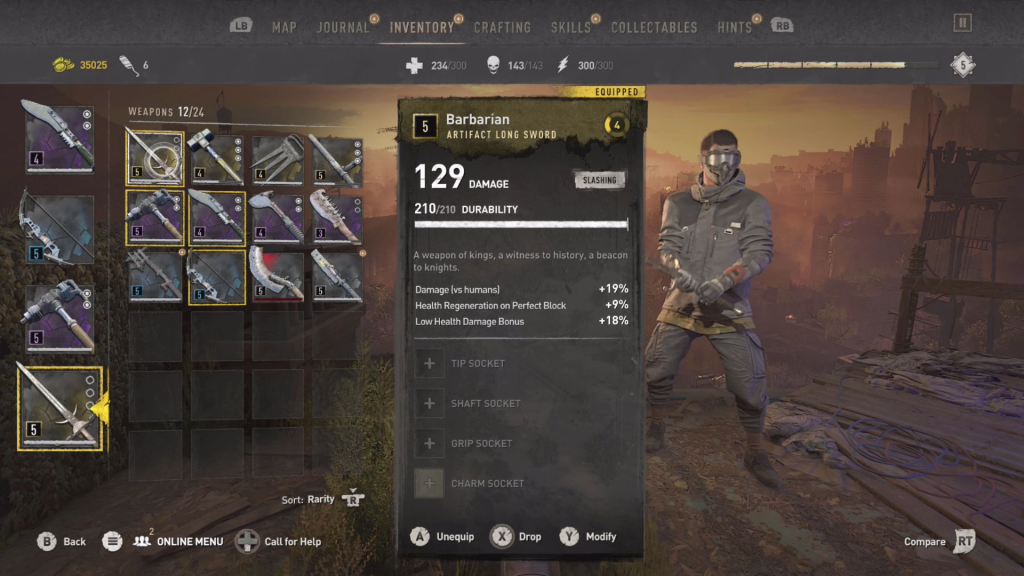 Conan, what is best in life? Crush the infected and see them driven before you! While being more of an easter egg than a regular weapon in the game, players can get this extremely powerful two-handed sword that is obviously a modded Atlantean sword, looking like the same Arnold used to slice the heads of his enemies in the movies. Even if you are not a Conan fan, this sword has good durability (210), and a huge damage output (115 Damage/Slashing). Make sure to save it for bigger enemies of course! To get this legendary sword you need to look for a GRE Anomaly in the Garrison. Inside one of the buildings, you will be able to see it lying on a table. It will be there waiting for you to pick up and crush your enemies! 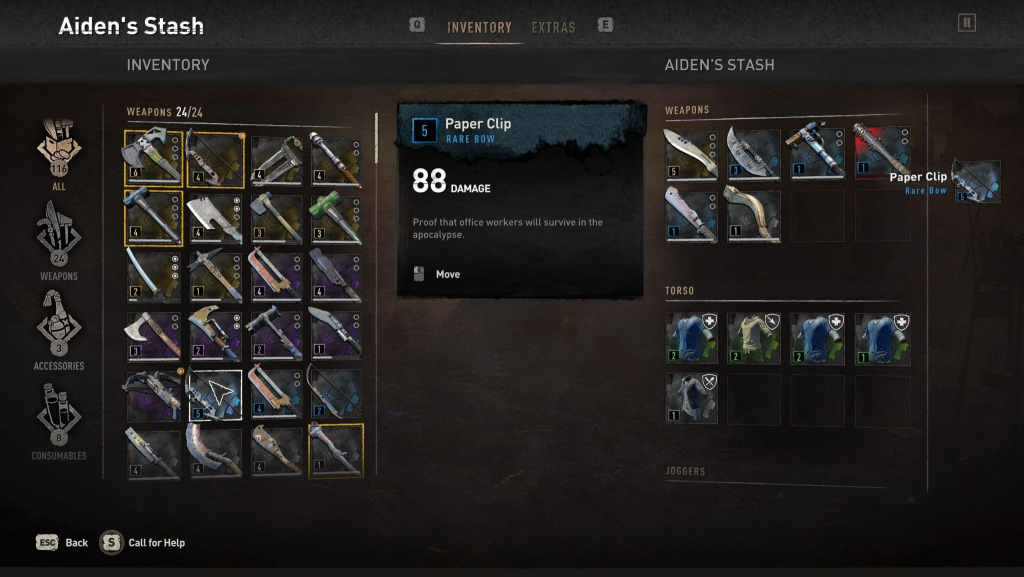 Melee weapons let you butcher your enemies in no time when they are close to you, but nothing compares to assassinating targets from a distance without them even seeing you. Paper Clip takes you exactly there. This mighty bow will make you feel just like Rambo. Compared to the Pipe bow and the Rust bow, its damage is from another world (88) and you can take out enemies with one shot if you aim for the head. Don’t worry if you miss and the arrow hits the body, just deliver another body shot and the poor thing is down. Just like the other bows in the game, Paper Clip can use special arrows. Exploding arrows are a must if you are aiming for a bigger group of enemies. Just make sure to be prepared with a melee weapon, as making such a shot will attract more infected to the party! Paper Clip can be obtained while going through ‘The Shoe Mission’. During the mission, you will find a GRE Inhabitor Container. Just right next to it is a room where you can find it. 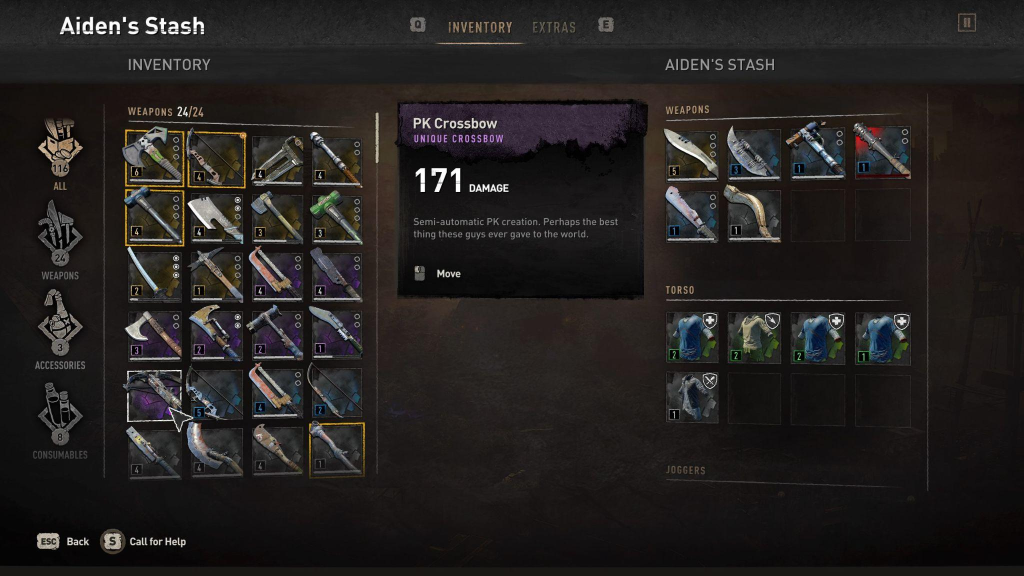 The Paper Clip might be the best bow in the game but the PK Crossbow is the best-ranged weapon in the game. If you are skilled enough, this weapon can do miracles. All the ranged weapons in the game cannot be modded in any way, and this one makes no exception. That’s irrelevant here, as this accurate crossbow is flawless in its natural form and extremely strong (171 Damage). PK Crossbow uses bolts as its ammunition, and there are different types you can use. Fire bolts, Electrical bolts, Impact bolts, just to name a few, have their own uses for specific cases. Make sure to experiment and see what works best in a given situation. You can make PK Crossbow yours by giving control of four Facilities to the Peacekeepers. By doing so, it will automatically appear in your inventory. 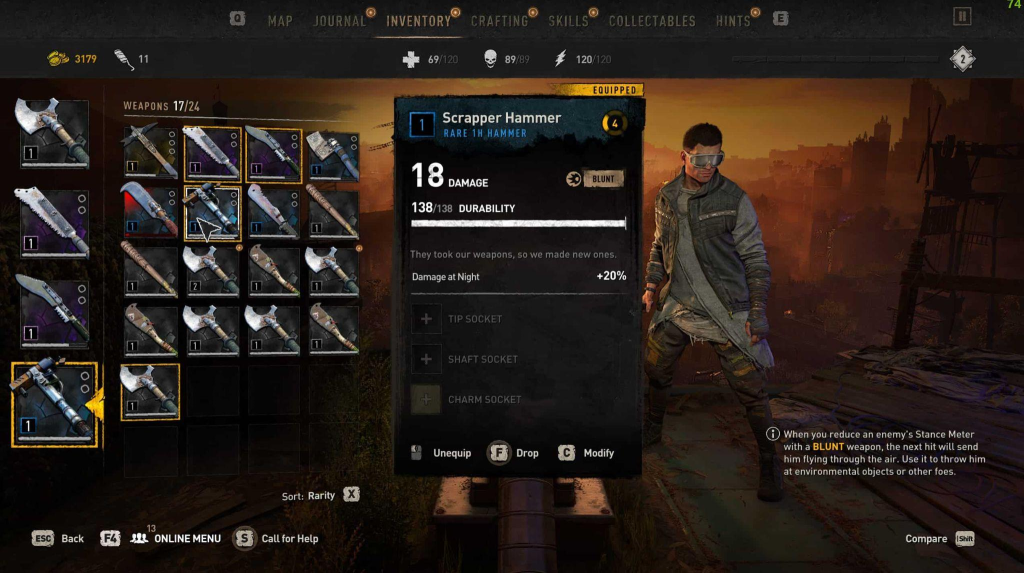 Unlike the rest of the weapons on this list, Scrapper Hammer is not an overpowered monstrosity, but rather a well-balanced part of your arsenal that works great against common enemies and this is why it wins a place in our list. If you upgrade it a bit and use proper mods, Scrapper Hammer will send larger groups of enemies down as well. You most likely won’t be able to finish the game using this hammer, but it will be your best friend until it stops being adequate when going against stronger enemies mid-game. How to get Scrapper Hammer? Well, just make sure to complete the Unruly Brother quest. It will automatically appear in your inventory as a reward. 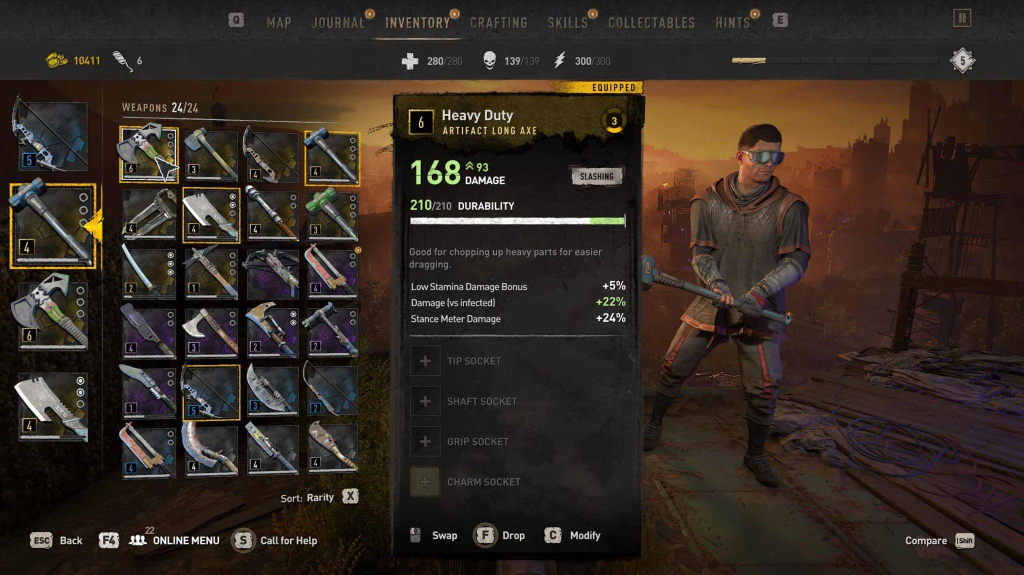 Just like its name suggests, this weapon is to be used when times get really heavy and tough. The Heavy Duty Axe is no joke! You can maul hordes of enemies with it, and it is one of the most deadly weapons in the game so far. It can ultimately become the highest damage dealer when enhanced with mods. Heavy Duty Axe comes with three bonuses as well: 22% damage increase versus infected, 5% damage increase when stamina is low and 24% stance meter damage. Of course, just like every other weapon we mentioned so far, it has its downsides. One such is the fact that you will be using an awful lot of stamina for each hit. You need to make sure that each blow you deliver is worth it. Don’t be too concerned about the cons of this weapon as the only way to get it is after beating the main story. It will be your best friend for the end game content though! 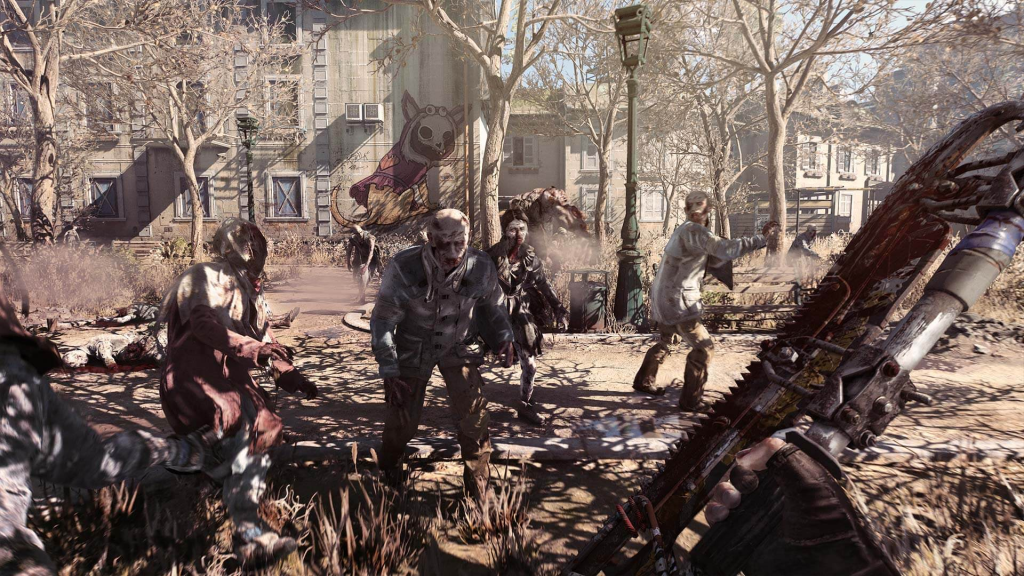 Dying Light 2: Stay Human is a worthy successor of the 2015 survival horror game and as promised by its developers, it will be 500+ hours long if you want to finish every last bit of it. The game was promised to be supported for five years, which means that we will be getting a lot of DLCs as time goes on. So expect new zones to explore, new enemies to match strength with, and of course a whole lot of new weapons. At this stage, we think that the list above consists of some of the finest pieces of weaponry you can find in the game. Of course, this is always a matter of opinion, as you may have already found better options or better battle strategies. Would you like to replace any of the ones mentioned above with another favorite weapon of yours? Sure, go ahead! You don’t agree with our list at all? Show your own list of the best weapons that helped you ‘Stay Human’! Comment below and let us know!