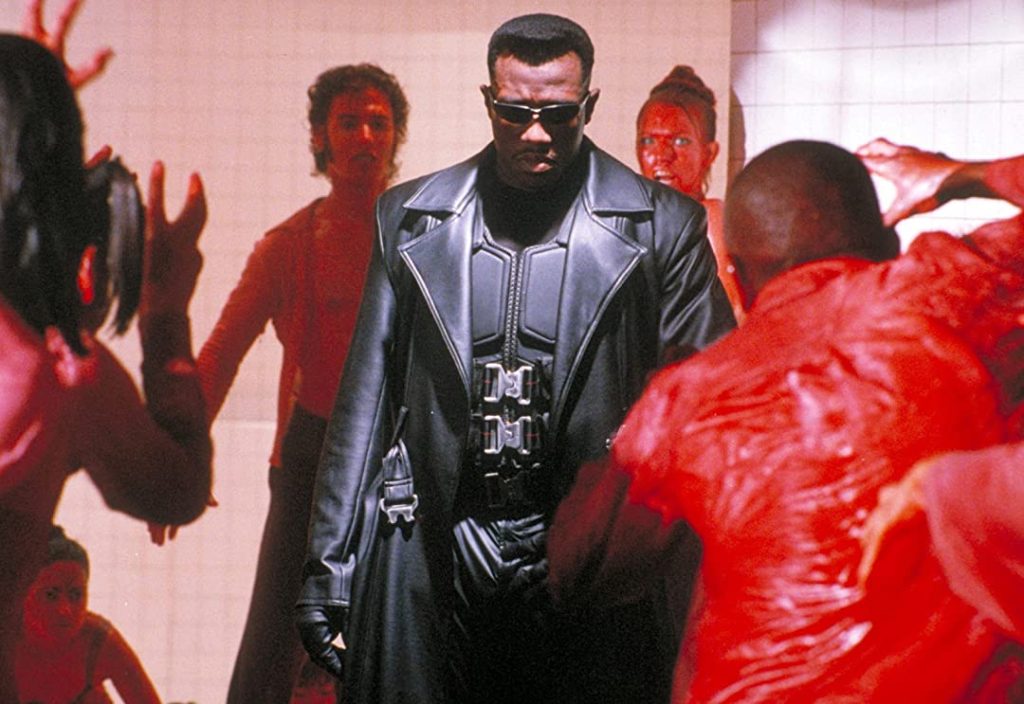 The following movie critique portion of this review was written by my colleague Cainan Myracle.

When you ask someone nowadays what their favorite Marvel film is, they most likely will name one of the many Marvel Cinematic Universe films. They most likely won’t name the Fantastic Four films with Chris Evans, the Punisher film with Thomas Jane, though they might name Nicolas Cage’s Ghost Rider. But one of the greatest Marvel films ever made, and in my opinion the grandfather of Marvel films, is 1998s Blade. Marvel’s first black superhero led film, though this hero killed a lot of people (mostly all bad) and used a ton of profanity.

Blade was the ultimate rated R comic book film. Led by action superstar Wesley Snipes, Snipes embodied Blade. He was Blade, in my opinion he still is Blade – you have your work cut out for you Mahershala. The film also had a nice cast of talent supporting Snipes, including Kris Kristofferson as Whistler, Stephen Dorff as Deacon Frost, Sanaa Lathan, Donal Logue and N’Bushe Wright. The film focused on Blade, a vampire hybrid that has all of their strengths and none of their weaknesses. The Daywalker as many label him. Blade is out to destroy the vampire nation, especially Deacon Frost who is up to all kinds of trouble. 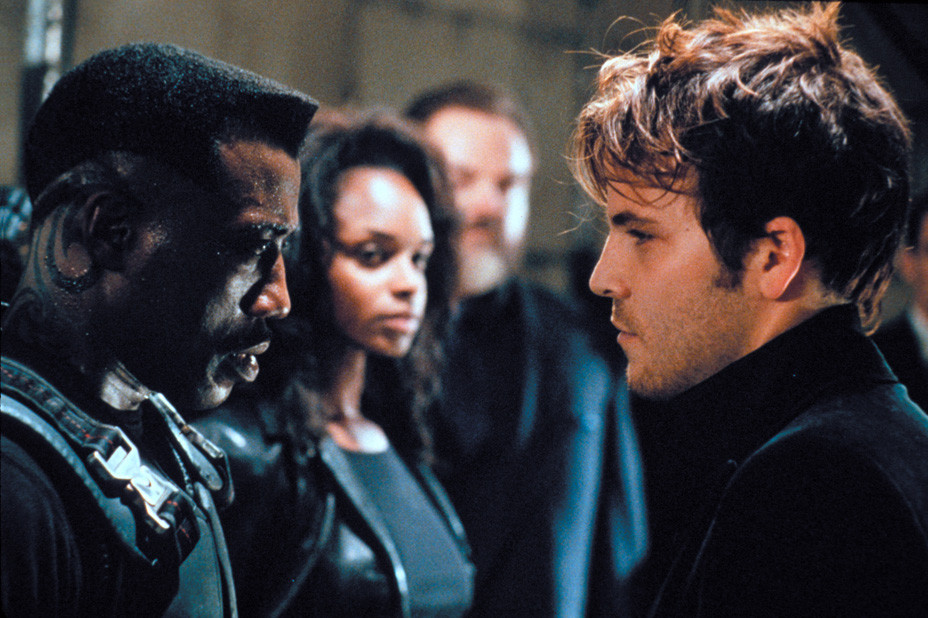 The film takes full advantage of Snipes charm and charisma as well as his martial arts background that set the stage for his performance as Blade that would carry on into two more films. Snipes has some terrific one liners that to this day continue to be quoted. Surely you have heard people say, “Some mother f*ckers are always trying to ice skate uphill”. Snipes was wearing the dark black shades for most of the film but could carry a scene just by a smirk or smile. Kristofferson shines as the tough and gritty father figure that supports Blade in his quest to rid the world of blood suckers. Dorff has an extensive film background but he is most known for his role in Blade. He plays the villain of the story who wants to rule the humans and establish his own dominance in the vampire kingdom.

It had been years since I had seen Blade but for the 2020 Halloween season, I decided to watch the entire trilogy and the 1998 film still holds up very well. The VFX are dated but they are not cheesy or hard to watch. They really did not need a ton of VFX from what I could tell other than the end fight with Frost and his Blood God powers. The film is a true classic that only gets better with age. I love the horror elements of the film as well. They did not go over the top like the next films would. They kept it simple. I am excited to see what Mahershala Ali can do in the role and I hope Marvel will make the film rated R because I feel Blade works better as an R-rated character. They have their work cut out for them and even if the film is good, nothing will take away from the treasure that is 1998s Blade.

There was a scene cut from the movie that showed Morbius making his presence known. Blade could have been the first film to kick off a cinematic universe for Marvel. Wouldn’t that have been something? 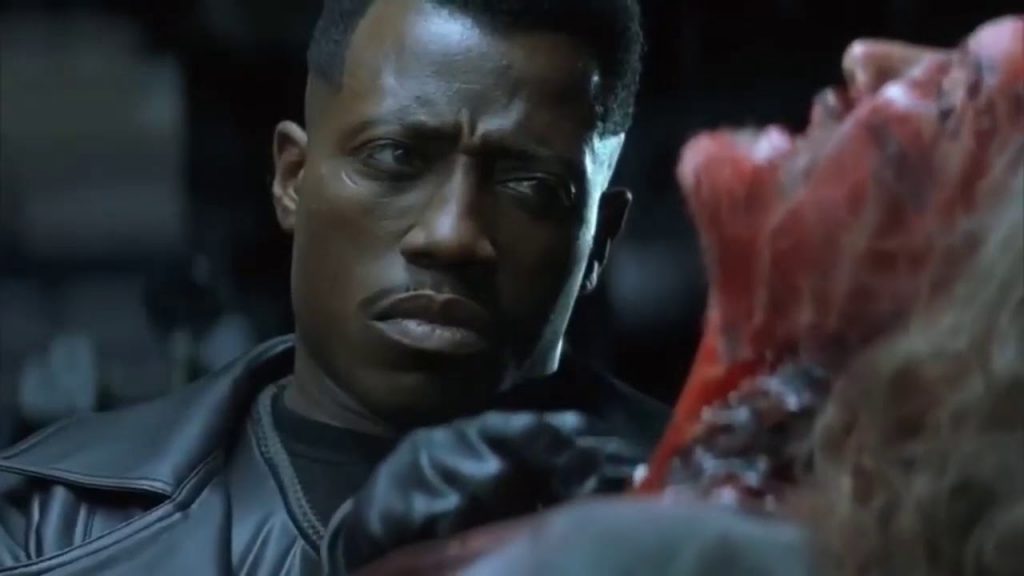 The 4K UHD Blu-Ray of Blade offers a noticeable uptick in quality in almost every respect over the accompanying Blu-Ray. The improvement in the black levels are especially strong in this presentation, staying deep and inky with excellent detail. When compared to Blu-Ray, the 4K version allows for way more depth, clarity and stability to the image. The film is one that has a very stylized look, from the dour color palette to the cool blue filter that is used in portions of the film, and this disc allows for a vividness that has been lacking previously. The highlights are balanced with no instances of blooming to be found. This disc puts the High Dynamic Range to good use with the strobing effects and the intense sunlight that is very bad news for vampires serving as a particular standout. The pops of color are often extremely impressive, especially in the vats of deep red blood that are used throughout the film. The depth of field is improved as specific aspects of the production design present with greater clarity than ever before. Skin tones and facial hair are really well defined throughout the film. If there is an issue with this presentation, it is the fact that the film grain looks managed at points, which leaves the transfer looking unnaturally smooth in places. Other digital anomalies such as compression artifacts or crush are not apparent. This is mostly an excellent transfer with increased detail and crispness that serves as a substantial improvement over the Blu-Ray.

The 4K UHD Blu-Ray disc comes with a knockout Dolby Atmos presentation that handles the action incredibly well. The track offers expert level immersion into the environment so that even the subtlest elements are represented. The Atmos presentation takes full advantage of the expanded channel allotment. During the early blood-soaked rave sequence, the channel separation is readily apparent with height channels coming alive from the kinetic sequence. All of the sounds are balanced well during the action sequences from hand-to-hand combat and sword play to heavy gunfire. The many fights and other such hard-hitting moments provide a fantastic amount of activity in the low end. Directionality of sound is never an issue with this track, and dialogue is reproduced with supreme clarity. Speakers remain remarkably engaged throughout the film, even during the quieter moments. The film establishes an impressive room tone that makes you feel like you are right there beside the characters. The audio presentation is a wonderful experience from start to finish. 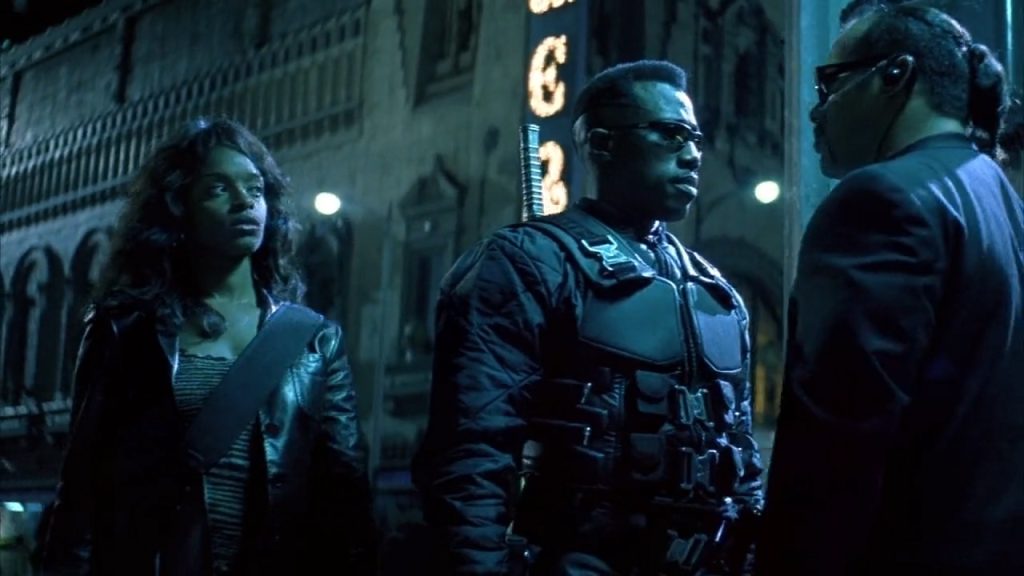 Blade is both an important and incredibly fun comic book film that more than holds up in most respects. The forthcoming version of Blade from Disney should be quite interesting, but Wesley Snipes will likely be the definitive version of the character to most people. Warner Bros. Home Entertainment has graced this one with a stellar new 4K UHD Blu-Ray with an upgraded A/V presentation and some cool special features. If you are a fan of the film, you are going to be blown away by this new presentation. Highly Recommended

Blade is currently available to purchase on 4K UHD Blu-Ray and Digital.