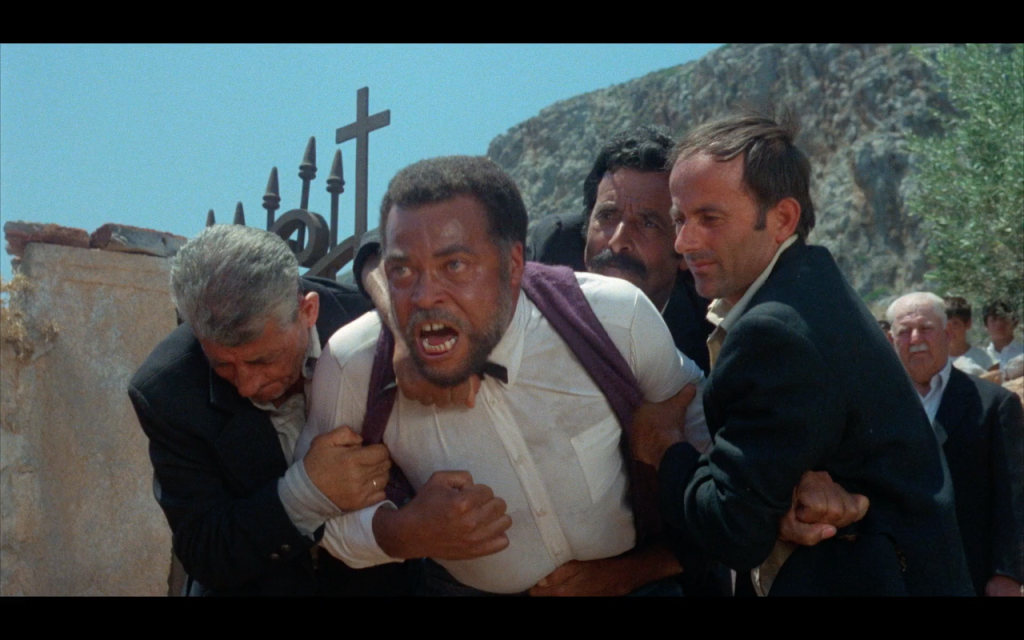 There is a certain charm that comes with watching a genre film that has long been lost to the sands of time. These are films that likely had production issues or distribution hiccups or even legal nightmares to sift through. You know going into them that they are likely not going to be of the highest quality, but you want something that at least brings a sense of fun to the proceedings. If you are really lucky, you might find something that truly surprises you along your journey. In the case of the 1982 Nico Mastorakis production Blood Tide, you get waylaid by the presence of James Earl Jones as a treasure hunter who stirs up trouble. That’s right, this eccentric Greek filmmaker got Darth Vader himself to travel to Greece between The Empire Strikes Back and Return of the Jedi to take part in this cheesy little flick. Once you have this information, you know you have to at least give this one a chance.

Blood Tide actually has a pretty decent plot, even if it is something we have seen before. In the opening sequence, we witness a Greek community conducting a ceremony in which they send off a young girl into a watery cave, presumably to serve as a sacrifice. Virgin sacrifices, as a concept, have been around for the longest time, but they can still often lead to some compelling scenarios when executed correctly. When two young newlyweds, Neil (Martin Kove) and Sherry (Mary Louise Weller), arrive on said isolated Greek island, they are not only looking for a beautiful honeymoon spot. They are also looking for Neil’s sister, Madeline (Deborah Shelton), who has been missing for some time. While it would stand to reason that a good portion of the film would be dedicated to this mystery, they actually locate her right away in the company of an explorer named Frye (James Earl Jones) and his girlfriend, Barbara (Lydia Cornell). Frye is convinced that there is treasure on the ocean floor near the island, but the mysterious locals are protective of their community and put up roadblocks to any unwanted attention. 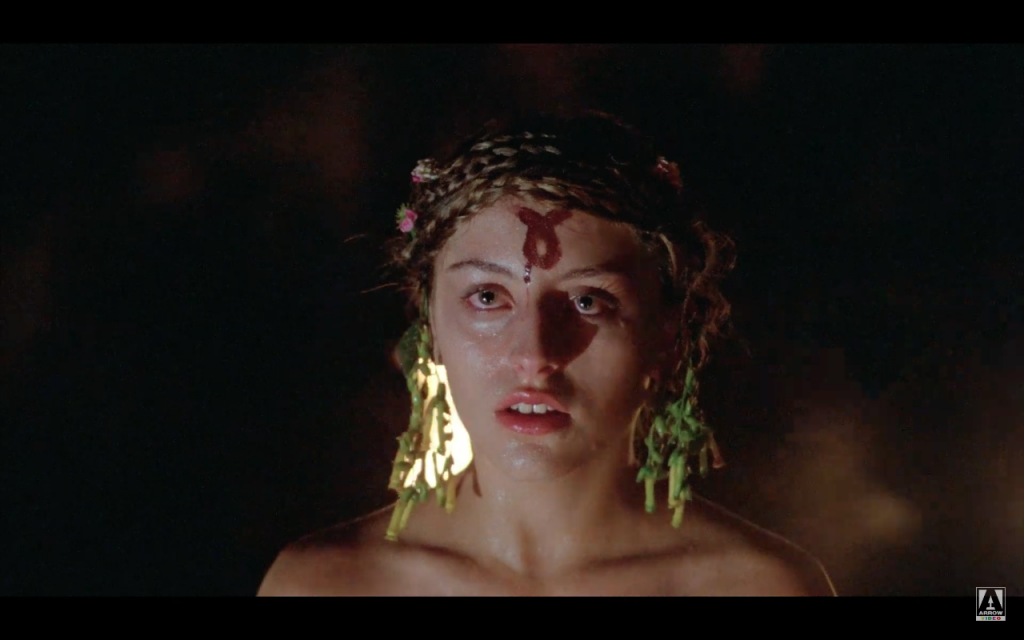 Silly little things like warnings will not keep a good explorer away, which leads to Frye accidentally freeing the monster that required the virgin sacrifices. This is technically a problem for the community, but the monster attacks at such slow intervals that you really do not feel all that concerned throughout most of the movie. The monster is seen for all of maybe five seconds throughout the entire runtime, but the look is so laughable that it would have been way more effective if they had just kept it hidden the entire time. The film sets up Madeline to be the next virgin sacrifice, as she is drawn to the creature in a supernatural way, but you never quite understand why. It would be tempting to blame the script for issues in logic or pacing, but you begin to understand that other factors were at play once you delve into the production details a bit. Blood Tide was taken away from director/writer Richard Jeffries before they started editing the film, leaving the prime creative figure out of the loop as delusional producers imposed their own will and additional footage on the film. There is a solid concept within this film, but the execution leaves a lot to be desired.

While the movie lacks mostly anything in the realm of real tension, there is a lot to appreciate about this film. While not award worthy, the cast put in some engaging performances for the type of film they are in. In a bizarre turn, James Earl Jones is an explorer that also happens to quote Shakespeare regularly. Jones has likely not thought about the film since he shot it, but his performance is just the right amount of over the top to keep things lively. The villagers, led by the mayor, Nereus (José Ferrer), provide an unsettling creepiness from their mere presence. The cinematography also happens to be stunning with its sublime shots of the Greek scenery. The movie is not bad if you do not get hung up on the actual plot. The creature almost feels like an afterthought as you engage with these characters in other contexts on the way to the final showdown. Blood Tide either needed a lot more of the creature or no creature shown for this to completely work. Or give me a film with these same characters in more of a Midsommar type of environment, and I could have gone for that. There were so many options for them to turn this film into something notable. As is, the film is mindless in a way that will mostly appeal to the hardcore genre fans. 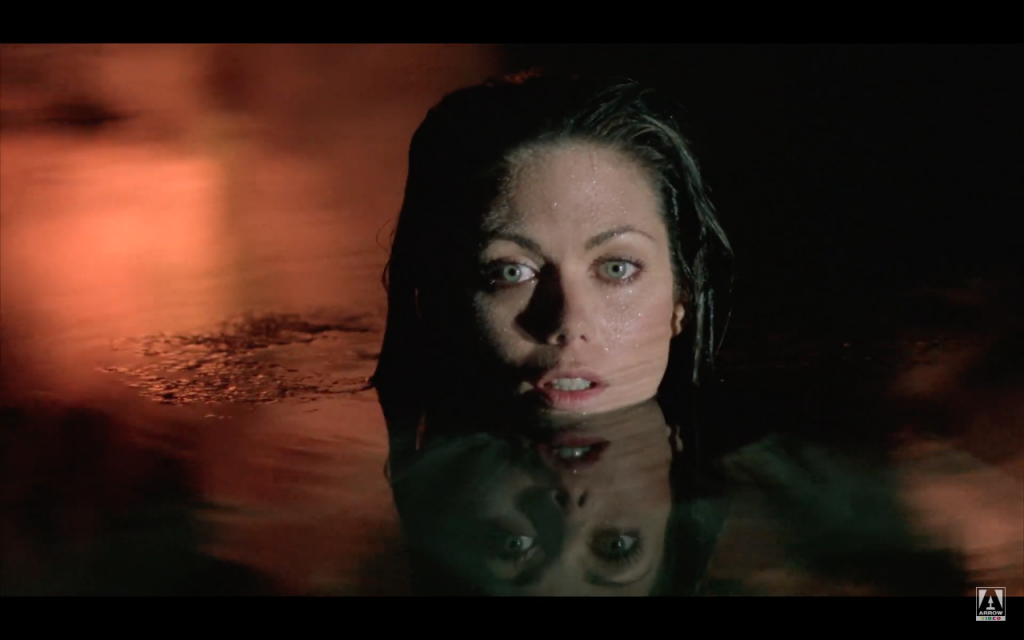 This new Blu-Ray from Arrow Video rescues Blood Tide from a long history of poor quality multipack inclusions with an AVC encoded 1080p transfer in 1.85:1, newly restored by Arrow from the original 35mm camera negative scanned in 4K resolution. As Richard Jeffries notes in the commentary, the film has never look as lush and vibrant as it does here. The film has pretty solid grain structure that preserves the filmic look of the picture, showcasing sumptuous details of the Greek island. Subtle elements such as the cobblestones and unkempt rooms reveal elements that were indecipherable previously. There are instances where the grain field becomes a bit heavier than normal, especially in the nighttime sequences. Skin tones look natural, revealing sunbaked bodies in unsparing detail. Arrow has once again lovingly preserved a little-known B-movie title for the next generation of genre fanatics.

This Blu-Ray comes with a LPCM mono track that represents the world in a pretty impressive way sonically. The desolate stillness of the island creeps through to provide some excellent ambient details. Likewise, the underwater portions of the film feel like a whole new world with engaging sounds. All of the various sounds in the mix seem accurately rendered so that nothing ever feels off. The dialogue itself comes through crystal clear without being crushed by the sound effects or score. The synth-based score from Jerry Mosely brings a sinister mood to the proceedings that is represented well in the mix. The soundtrack is definitely a product of the time, but it sounds quite good in this presentation. 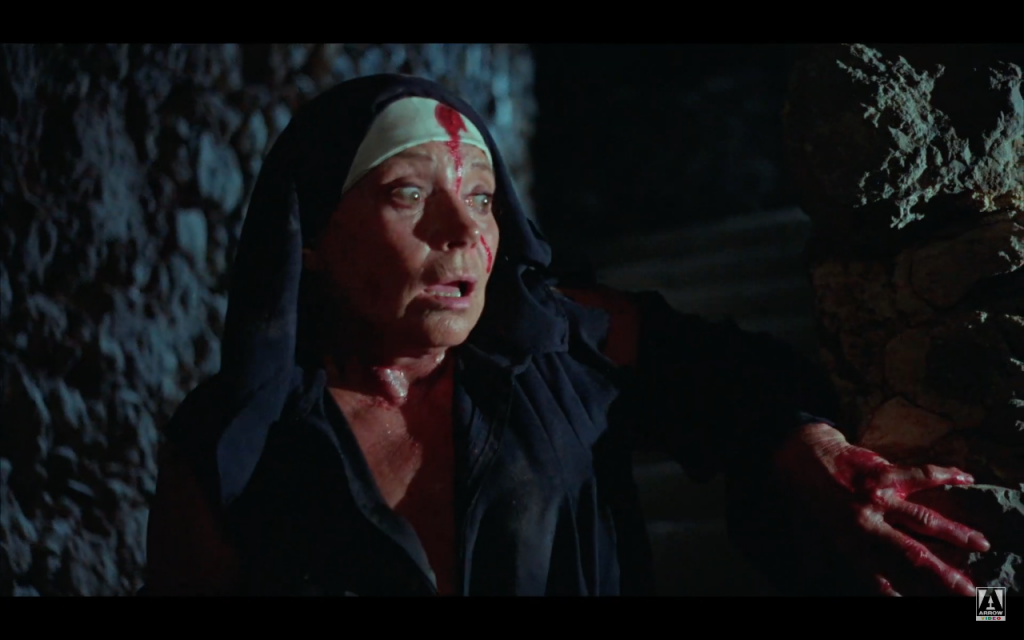 Blood Tide is the victim of creative control being taken away from a director before they even had a chance to fine-tune it. There is a lot to appreciate in this film, including an amped up performance from James Earl Jones, but it is hard not to wish for an alternate universe director’s cut when the film does not completely satisfy. Arrow Video has done an impressive job of rescuing this title and providing it with an amazing A/V presentation and some fascinating special features. The film is a bit of a mixed bag, but it is worth checking out for James Earl Jones alone.

Blood Tide is currently available to purchase on Blu-Ray.