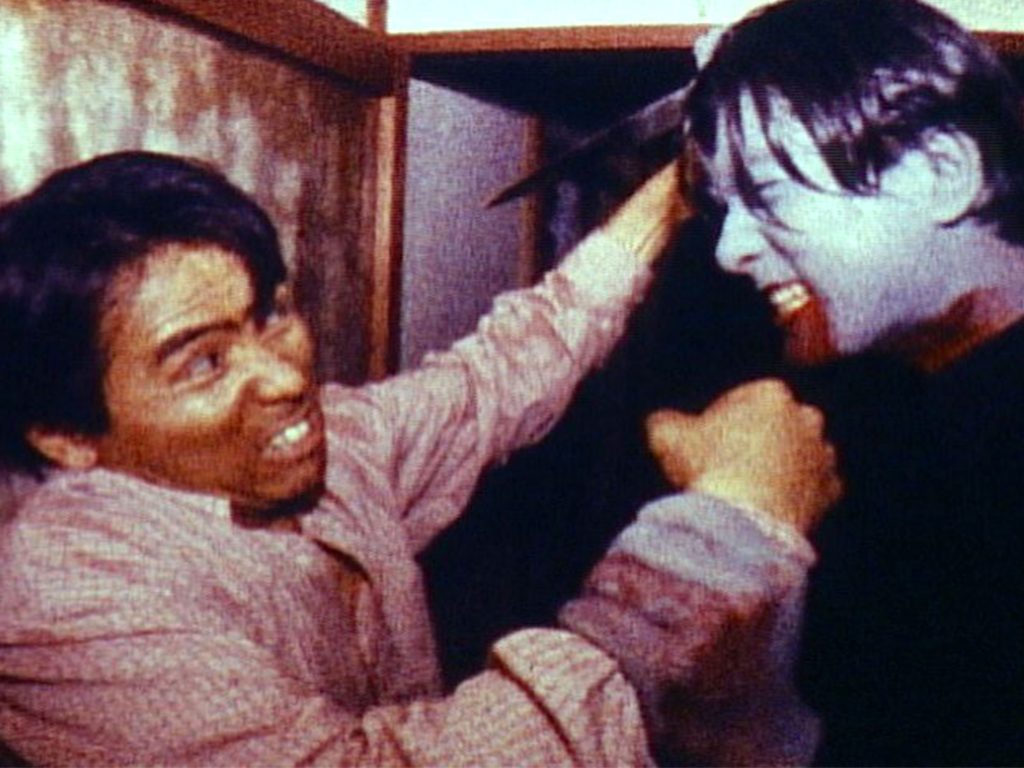 Alternately known as “The Japanese Evil Dead,” this legendary, sought after independent Japanese cult film will enjoy its first ever North American release in any format and features new bonus content. Trapped inside a haunted house, a body builder must survive a blood soaked night of insanity to save himself and his friends from a demonic ghost that is hell-bent on revenge.

For thoughts on Bloody Muscle Body Builder In Hell, please check out our discussions on The Video Attic:

Bloody Muscle Body Builder In Hell is presented on Blu-Ray with its original 1.33:1 presentation which looks better than the recent labelmate release of The Necro Files, but is still hindered by the limitations of the format. As the disc boots up, you are greeted with a warning that the presentation was created with the best source material available which includes SD tape master. This may be a new Blu-Ray release, but you are still getting nowhere near the ballpark of a typical HD quality. Wild Eye Releasing and the whole Visual Vengeance line are courting fans wanting to recreate the low-grade aesthetic of the SOV format with the stability that Blu-Ray can offer. Although, technically, according to the commentary track, this was shot on 8mm and only edited on video. The film is never going to look what most would qualify as “beautiful”, but to be fair it was never supposed to.

Perhaps this title looks better than the other Visual Vengeance title due to a mixture of its filmic roots and the contained nature of the shoot. There are only a handful of locations in this narrative, and the lighting conditions seem fairly controlled and properly suffused. Compression artifacts and other digital anomalies such as macroblocking are still present on this one, but the issue seems less robust. Details in costumes and the production design are faint at best. One cool thing that should be noted is that the impressive practical effects on display look really nice here, not betrayed by the slightly increased resolution. Colors are muted but work well for the palette they are seeking to achieve. If you do not go in expecting HD quality, fans of the film should find themselves generally pleased to own this film in the best quality possible.

The new Blu-Ray includes a DTS-HD 2.0 Master Audio track, but the disc actually defaults to a Dolby Digital 2.0 track which sounds a bit less robust and likely more accurate to the experience back on VHS. Both of these tracks are in the original Japanese with optional English subtitles and translate the material well. The most desirable aspect of this track is the music which comes through with a nice fidelity. The dialogue mostly comes through without getting crushed by the competing sounds, but you can tell there were some limitations in capturing the material. There are some sound issues due to the source material, but the track remains faithful to the intention of the creative team. This one sounds as good as the material will allow. 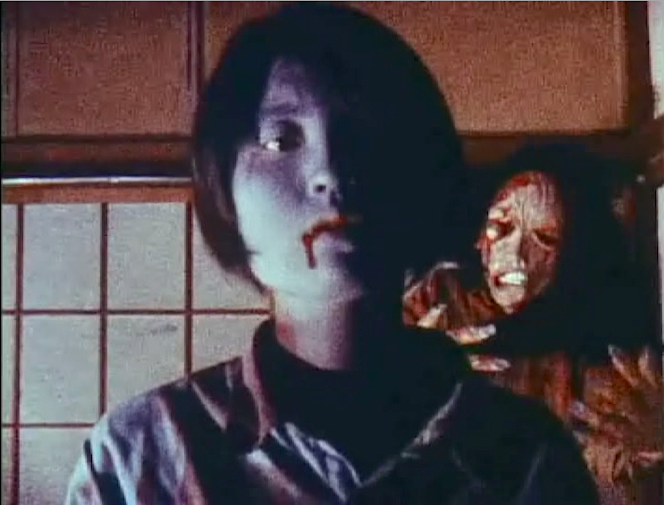 The Visual Vengeance Collector’s Edition of Bloody Muscle Body Builder In Hell includes an array of physical items with the first run of the package including a limited edition slipcover, double-sided cover art, a mini-poster, and Vintage style Laminated Video Store Rental Card. The on-disc special features are as follows:

Bloody Muscle Body Builder In Hell is a well-constructed microbudget horror film which pays homage to some of the greats while putting its own spin on the genre. Director Shinichi Fukazawa does not let budget limitations stand in the way of his creativity when it comes to special effects and general crafting of his story. It is more than a bit shaggy, but it is a testament to what can be accomplished when you are passionate about your art. Wild Eye Releasing and Visual Vengeance have released a Blu-Ray that sports the best A/V presentation you could hope for with this one and a proper array of great special features. If you happen to be a fan of this film, you will be shocked by how much care was put into this release. Recommended

Bloody Muscle Body Builder In Hell is currently available to purchase on Blu-Ray.

Disclaimer: Wild Eye Releasing and Visual Vengeance have supplied a copy of this disc free of charge for review purposes. All opinions in this review are the honest reactions of the author.