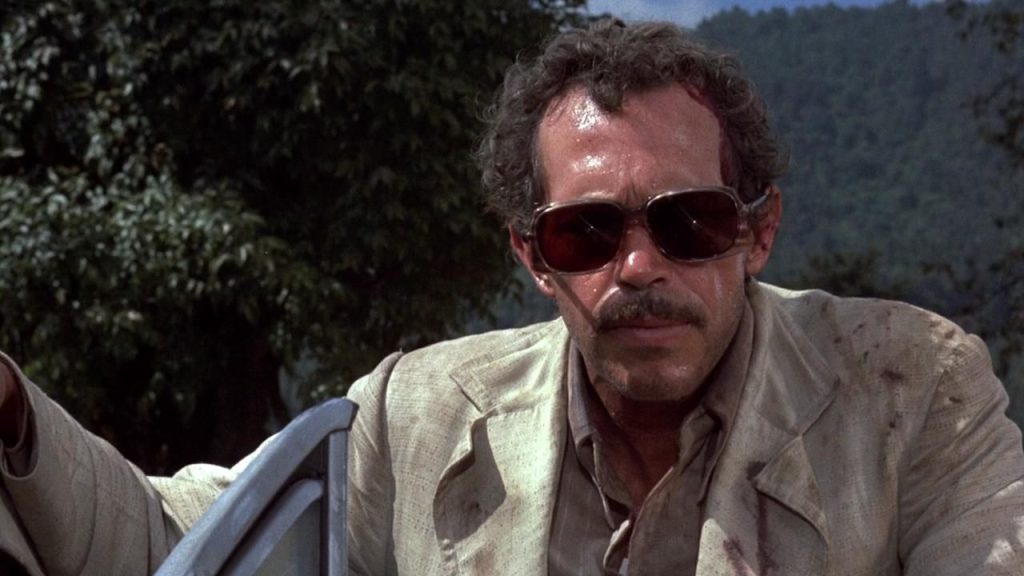 There are many directors in the realm of cinema that know how to provoke a reaction, but few major ones did so as consistently as the one and only Sam Peckinpah did throughout the 1960s and 70s. Peckinpah was a storyteller who loved exploring morality and the darkness that resides in the hearts of men. He came to fame through his unique approach to the western genre that was in desperate need of a fresh perspective. Not only were his protagonists often morally complex individuals, but his films were typically bathed in the blood of nihilism and even tackled violence against women in an unflinching manner. Even though many would agree that his output was quite brutal, Peckinpah would argue that studio interference often resulted in his films not being released as he intended. The only exception to this rule according to the acclaimed auteur is the 1974 Mexican-American neo-western Bring Me The Head of Alfredo Garcia. While the film was eviscerated both commercially and critically at the time, legions of genre enthusiasts have come to regard it as one of his best features. While that is debatable, it cannot be argued that this is a film that inspires passionate discourse.

What starts as a tale of retribution evolves into something much more complex. The loathsome and scary Mexican crime boss El Jefe (Emilio Fernández) is none too pleased when his darling teenage daughter becomes pregnant. He is even further enraged when he interrogates his child and learns the father’s identity is Alfredo Garcia, who the boss had been grooming to be his successor. An emphatic declaration of the titular phrase is coupled with the promise of a $1 million bounty for carrying out the retribution. Two months of searching does not turn up any leads, which leads two ice cold hitmen, Sappensly (Robert Webber) and Quill (Gig Young), to pay patronage to a saloon in hopes of ascertaining the location of Garcia. It is here that they meet Bennie (Warren Oates), a retired US Army officer turned bar manager who plays dumb when asked about Garcia. Bennie might know Garcia, but he has no idea where he is until his girlfriend Elita (Isela Vega), who admits to cheating on Bennie with Garcia, reveals that he died the previous week in a car accident. Believing he can make some easy money, Bennie makes a deal with the hitmen to deliver Garcia’s head. 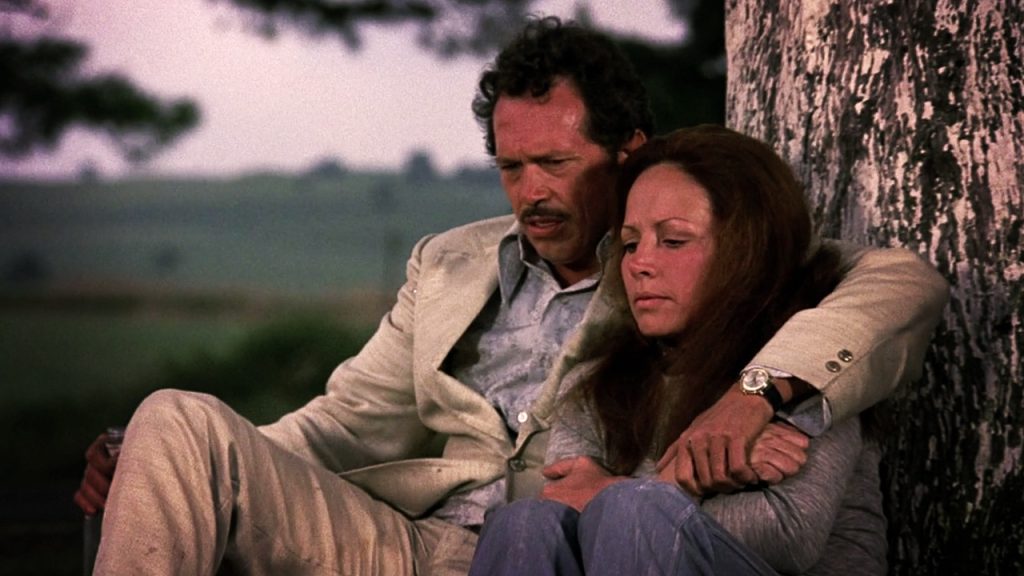 It is on the road trip to Garcia’s final resting place with Elita that Bennie experiences a series of events that will force him to confront the peril that comes with his opportunism. Bennie has lived his life as a man with low moral standards and a vested interest only in furthering his own way up the social ladder. He could live a simple life with the love of a good woman, but his inability to allow himself to even tell Elita that he loves her keeps him on unstable ground. His journey is one that puts Elita in unnecessary danger, such as a ridiculous sequence in which a pair of bikers (one of whom is an unexpected Kris Kristofferson) confront them and attempt to sexually violate Elita. Those with a knowledge of Peckinpah will know such acts of visceral violence are not unusual for the filmmaker. He is out to make a stark point about the cost of lusting after money, and he will not compromise his vision to appease more squeamish audience members. This approach can be very polarizing, but the reckoning that Bennie must face in the latter part of the film is made all the more powerful due to the narrative choices.

Your experience with Bring Me The Head of Alfredo Garcia will largely depend upon how much you can stomach some of the more antiquated notions that Peckinpah has while constructing his narrative. The film is quite a rough watch, not just for the violence but due to the sexism that is emanating off of the film every time a female is on screen. Some of it is commentary on the part of Peckinpah, but the director himself is as guilty as anyone in how he constructs his shots and stitches together his narrative with the male gaze. From a technical standpoint, this film has a lot to offer including a visually grimy aesthetic to complement this lurid nature of the story. Warren Oates is great in the lead role, coming off as a massive pig at his worst and someone striving to be worthy of redemption at his best. Isela Vega does what she can in her loosely defined role, acting as an inciting reason for Bennie’s change. Peckinpah is an aggressive storyteller who does not shrink away from the tough subjects. The film may not always be pleasant, but it is a fascinating entry into this filmography. 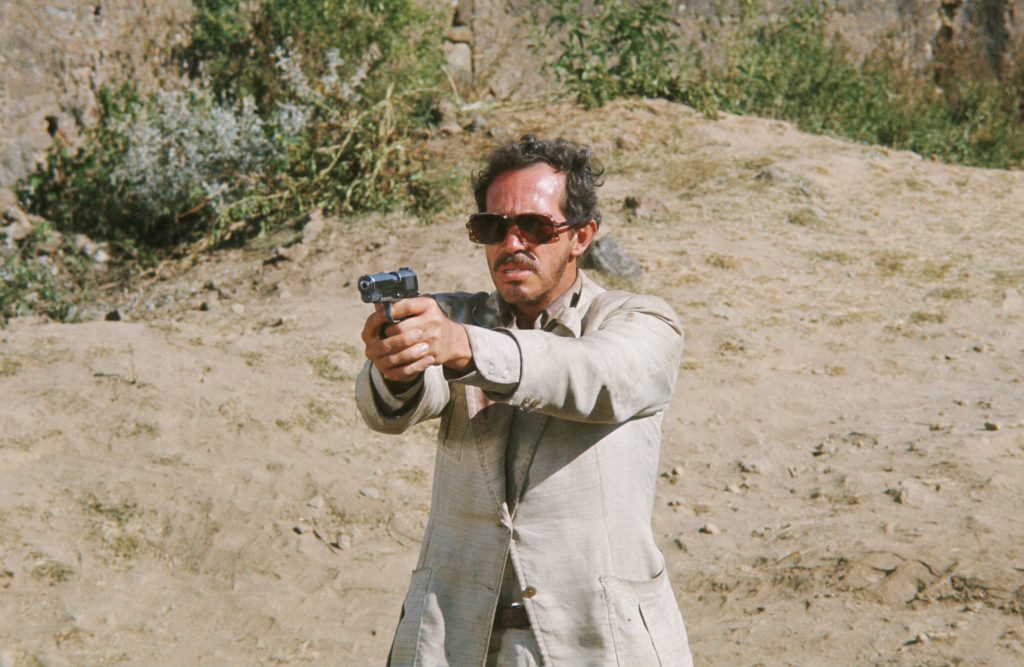 Bring Me The Head of Alfredo Garcia returns to Blu-Ray courtesy of Kino Classics with a digital AVC encoded 1080p transfer in 1:85:1 derived from a 4K scan of the Original Camera Negative conducted overseas by Arrow Video in 2017. The film was previously available on Blu-Ray through Twilight Time, but that release has long been out of print. This “new” disc actually first came out in March 2021, but this review is only just being published because I have been waiting on a replacement disc since that time. The initial batch created for this new release inadvertently used an old MGM master instead of the 4K scan, and Kino Classics corrected the situation via the aforementioned replacement program. If you are reading this and bought this title right when it came out, you might want to look into the replacement program yourself here.

If I want to see a silver lining to this situation, it might be the fact that getting the older master initially allows me to see what a tremendous improvement the corrected 4K scan is for fans. This transfer maintains the natural film grain of the presentation without becoming intrusive or clumpy. There are still a handful of instances where it becomes a bit loose, but nothing that is too distracting. The picture reveals a fantastic amount of detail in the landscapes and within the textures of clothing which makes it feel more three dimensional. Colors are well saturated in a pleasing way, and instances of print damage have all but been eradicated with only the occasional speck and mark visible. Overall clarity and detail is stunning, and skin tones are natural and consistent with subtle facial features easily noticeable in closeup. Black levels hold up well with crush not serving as an overwhelming issue. This new presentation from Kino Classics is very impressive, which should please fans of the film.

The Blu-Ray disc comes with a DTS-HD 2.0 Master Audio track that perfectly preserves the artistic intention of the film. The score from Jerry Fielding sounds great throughout the duration of the film, as it creates a sparse, menacing tone for the film. There is never a moment where it threatens to overwhelm competing sounds, and it maintains a good balance so that dialogue comes through clearly. Environmental sounds such as the blowing wind and automobile noises are rendered well alongside everything else. The more kinetic moments pack a real punch and are represented well within the mix. There does not seem to be any majorly noticeable instances of age-related wear and tear. Kino Classics has given this film the perfectly preserved, faithful audio presentation it deserves. 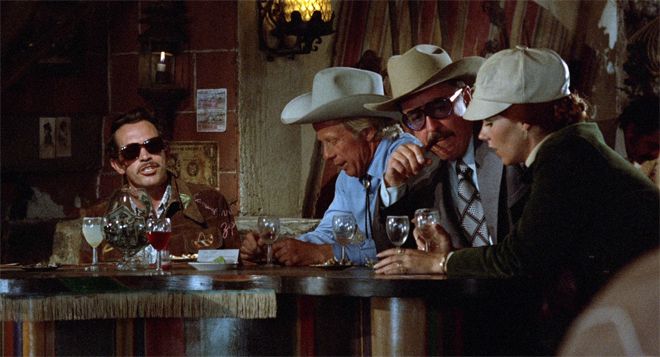 Bring Me The Head of Alfredo Garcia is a ruthless film which finds Sam Peckinpah working in his most artistically free mode. It turns out, when you give a guy like Peckinpah a chance to do what he wants, he does not hesitate to confront the morally questionable side of society. Warren Oates delivers one of his most memorable performances as a character you can love and hate in equal measure. If you can handle it, this is a well crafted film which will stick in your memory long after it has finished.  Kino Classics has released a Blu-Ray featuring a very strong A/V presentation and a great assortment of special features. If you are a fan of this film or Peckinpah in general, this is a good addition to the collection. Recommended

Bring Me The Head of Alfredo Garcia is currently available to purchase on Blu-Ray and DVD.