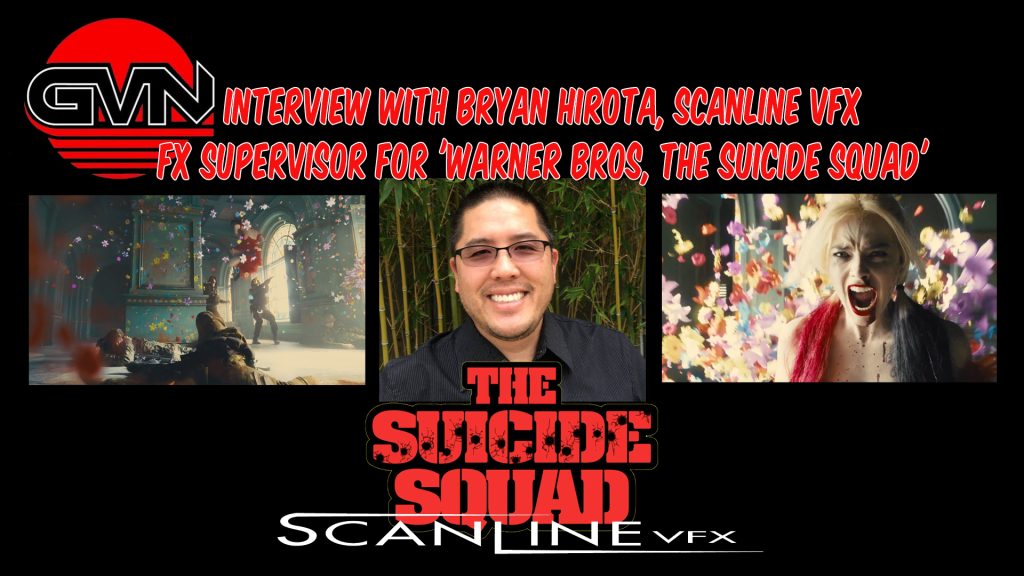 The last time I had the pleasure of talking to Bryan Hirota, we discussed Scanline VFX’s work on Godzilla vs. Kong. At the end of that interview, we discussed about what other projects were coming up and he mentioned The Suicide Squad.  Well, now that some time has elapsed since the film’s release, we were able to hook up with Bryan and discuss the work Scanline contributed to the film. So let’s welcome back Bryan Hirota to GVN’s Scanline VFX Interview.

GVN: Thanks once again for visiting with us Bryan. Hope you are doing well.

Who Gets the Work?

GVN: So, for today, just as we hinted at the last time we spoke [Godzilla vs. Kong], we are discussing Scanline VFX’s work on The Suicide Squad. But before we dive into The Suicide Squad, and just so we can understand the process, when a production is looking for VFX houses to work on their projects, do they reach out to certain companies (such as Scanline VFX) or do the VFX houses apply to the studios for the job?

BH: There are a variety of ways in which VFX houses end up on shows. In this particular case, The Suicide Squad had been well into post-production with their main vendors and they had a batch of work that was in need of a home. Kelvin McIlwain the overall VFX Supervisor asked us to bid on the work.

GVN: As a follow-up, do you know going in which shots you are bidding on and what influences a studio to choose one company over another? Is it reputation? Past work with the company? Or does it basically come down to costs?

BH: If you are bidding a show early like say in pre-production the shots themselves don’t exist and the bidding process is a bit more theoretical but you try and quantify the work as much as possible. For this show they provided us with cut sequences of the film, artwork and where it existed post-viz of the shots to understand what was desired for the shots.

Cost is always a factor but the work the company has done either for the VFX Supervisor, director or studio also figures into the decision. Also the specific type of work would likely influence things as well. If it’s work you feel confident anyone could do it might be that cost is the largest factor. But if it requires a specific skillset,  you would want to weigh the experience of the company as well.

Harley’s Visit to the Palace

GVN: When it came to The Suicide Squad, Scanline worked on a hefty 271 shots across 6 different sequences. Most of them revolving around Margot Robbie’s Harley Quinn. Including one of my favorite scenes at the President’s palace. What were the challenges faced by your team for the scenes at the palace, especially during her escape?

BH: The palace in total encompassed enhancing location photography for the exterior, interior sets and some process screen set pieces for the balcony and roof tops. The challenge for us was to make sure those various pieces played together and felt all part of the same environment.

GVN: Part of the scene involved some animations (flowers, birds, bunnies, etc.) intertwined in the live action. How was this accomplished?

BH: We received some good concept art and postviz for that scene that gave us the basic idea of what James was after. Next we went through a round of creating concepts to present to James to flesh out the ideas and see what direction appealed to him. We created all of the animated flowers and animals as rigged 3d characters/environments and showed a variety of rendering styles including a fully flat 2d “toon” style look we developed.

We tried to balance the look of the cartoon characters into the photography but not so much that they lost the feeling of being drawn. One example of a compromise was that we having motion blur from the camera helped integrate the characters into the shots but keeping any motion absent from their own movements still allowed them to feel like cartoons.

GVN: Another scene Scanline took on was the escape from the prison van. How many different elements were included to pull off that shot and did you run into any challenges in compiling the various effects required including the ‘Operation Jotunheim/Operation Harley’ sign at the end of that sequence?

BH: We took what production shot and built a digital jungle hillside to place the car footage on. We also added a few digital cars. Having the jungle environment was helpful as there were a handful of blue screen interiors that we needed to create environments for and when we see the prison van roll over it’s a digital shot. James also enlisted our help in beefing up the look of the interior of the prison van and we ended up augmenting the hold cell to make it feel more rugged.
The primary challenge with the “Operation Jotunheim/Operation Harley” was finding the right balance of believability in terms of dynamics from the fire/smoke simulations and legibility. It needed to feel right on both fronts to James so we ran a number of variations based on feedback to find what suited him.

No Rest for the Weary

GVN: Thanks, as always Bryan for sharing a bit of your time during your always busy schedule. We appreciate your willingness to do so. One last question for you. Once you have completed your work on a project like The Suicide Squad, how much down time do you get before you are moving on to the next assignment? In addition, is a break required before you are forced to take on new challenges and the travel that might require?

BH: You’re most certainly welcome. Last year was a bit of an odd one. I ended up working on this job sandwiched between Godzilla Vs Kong and Zack Snyder’s Justice League. When Justice League wrapped I was already helping to prep The Flash. Strictly due to circumstances being what they have been I haven’t really taken a break recently. Probably should, but haven’t.

GVN: Since I know better than to ask what you might be working on next, I will refrain from doing so. Unless you want to…? Either way, we look forward to our next talk with you and Scanline VFX.

BH: I can tell you what I’m currently working on (not much else in the way of details, though). I am working on Andy Muschietti’s The Flash starring Ezra Miller.

GVN: Well that at least sets the stage for a future conversation. Thanks, Bryan.