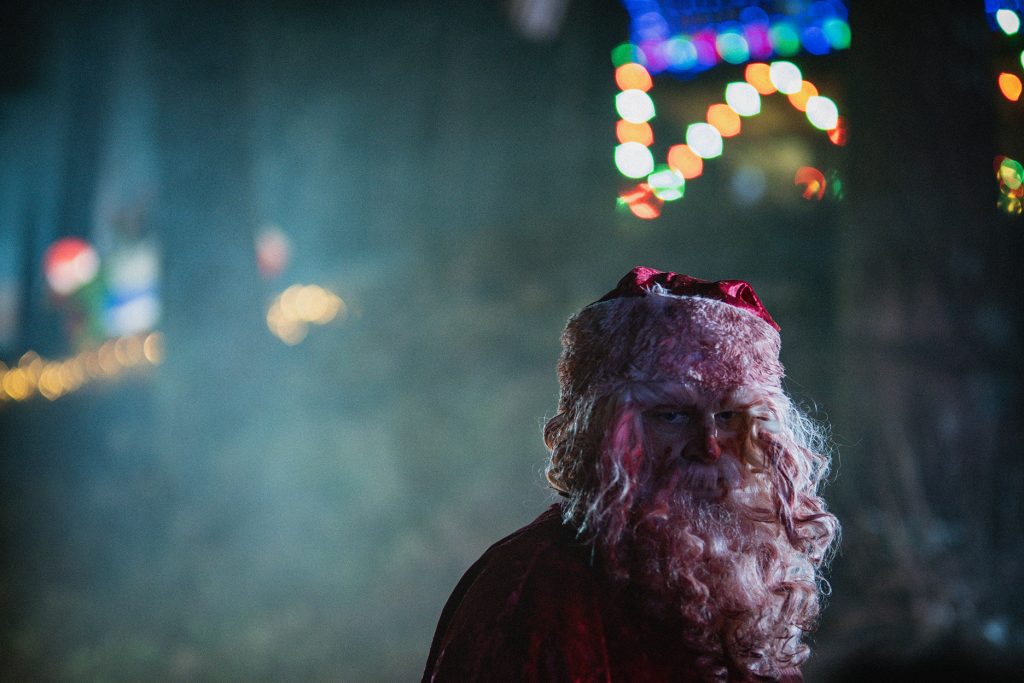 Plot Summary: It’s Christmas Eve and Tori just wants to get drunk and party, but when a robotic Santa Claus at a nearby toy store goes haywire and begins a rampant killing spree through her small town, she’s forced into a battle for survival.

This is quite the year for holiday horror offerings with the release of Violent Night, The Mean One, and The Leech, not to mention the ultra-low budget fodder seemingly made for Tubi. Standing tall among them is the insanely fun Christmas Bloody Christmas. Who wouldn’t be sold on the idea of a killer robotic Santa? Something writer/director Joe Begos does really well is fleshing out both the film’s world and the characters that inhabit it. Right away, we know exactly who these characters are. Tori (Riley Dandy) is a music and movie obsessed alternative girl who prides herself on going against the grain. In any other filmmaker’s hands, she might come off like a stock, “not like other girls” character, yet she is afforded more depth than what is usually seen in horror films.

Another striking aspect is the dialogue that crackles with razor sharp wit, which is great since the first 20-25 minutes are spent getting to know Tori and, to a lesser degree, Robbie (Sam Delich). Tori’s character development isn’t rushed, which is very wise because it makes her likable and relatable. The banter between the two is both mesmerizing and realistic. This film is also loaded with references and name checks of other classic Christmas movies. This could be a bit annoying, but Begos makes it work here.

Begos is owed lot of credit for taking the killer Santa formula and attempting to mix things up. Think The Terminator, mixed with Silent Night, Deadly Night and a dash of Assault on Precinct 13 thrown in for good measure. The fusing of action and horror is a clever way to play this as it adds something different than just a slice-and-dice holiday outing. There are some aspects that don’t make a lot of sense, like why these robotic Santas were created in the first place, but even so, those elements are never distracting.

Though the movie hints at some satire a la Robocop, it never quite takes it far enough. Even if the film isn’t exactly tense, the killer Santa brought a nice creep factor to this holiday party. The action set pieces are really well executed and showcase Begos’s chops with this kind of material. A scene that includes a massacre at a police station, for example, is really incredible work. The film also has an electric, punk rock vibe that works very well in Begos’s neon-hellish wonderland.

Riley Dandy plays our heroine and really knocks it out of the park. Dandy is effortlessly endearing and a total badass. She is everything you would want in a final girl. The supporting cast is also excellent with Sam Delich, Jeff Daniel Phillips, Jonah Ray, Dora Madison and Abraham Benrubi as Santa.

From a technical standpoint, the indie director always crafts a film that feels polished and works extremely well, assuming he is working with a modest budget. We get Begos’s style of neon-drenched sets which work within the framework of the fantastic Christmas vibes. It also helps give the movie an ’80s feeling. It also appears to be shot on film rather than on digital. Practical effects are used, and the metalized Santa head is effective as hell. Seeing how Tori’s character is such a music lover, the soundtrack and its needle drops are nicely woven throughout.

Joe Begos has always been a creative filmmaker that doesn’t let budget stop him from making exciting and engaging films. While Bliss is still the favorite, this latest film ranks very high on the list. Christmas Bloody Christmas is funny, punk as hell, and a wicked good time. It’s a must-see ho-ho-horror film.

Shudder and RLJE Films will release CHRISTMAS BLOODY CHRISTMAS in Theaters and it will stream exclusively on Shudder on December 9, 2022.