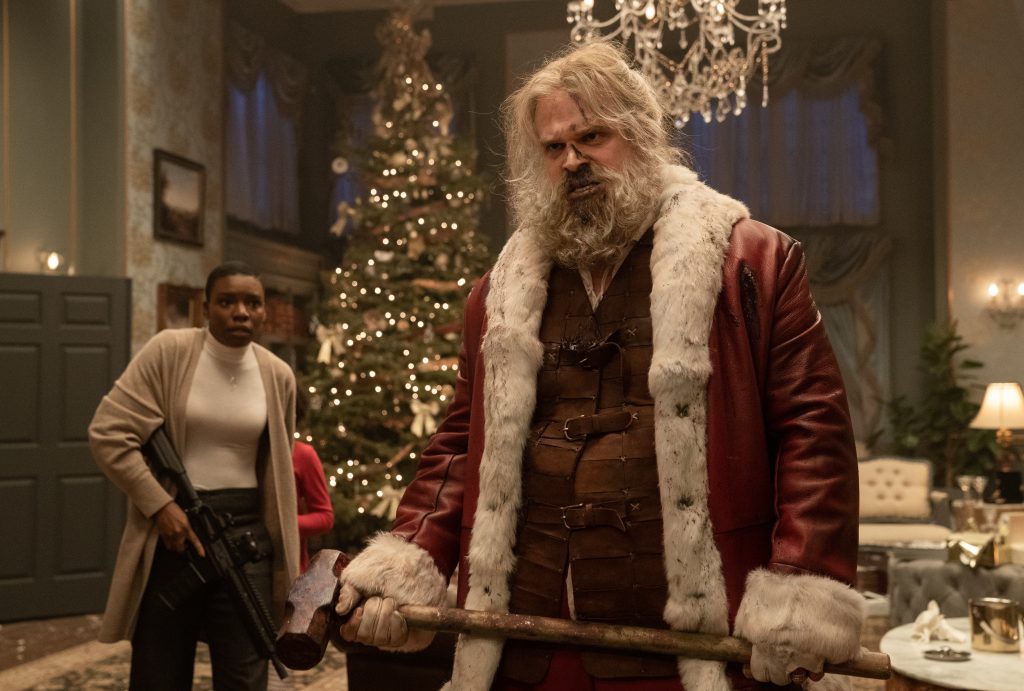 Synopsis: When a team of mercenaries breaks into a wealthy Lightstone family compound on Christmas Eve, taking everyone inside hostage, the team isn’t prepared for a surprise combatant: Santa Claus (DAVID HARBOUR, Black Widow, Stranger Things series) is on the grounds, and he’s about to show why this Nick is no saint.

There’s nothing more intriguing than the unknown. As we grow and realize that things once believed to be fact are actually globally perpetuated and sometimes well-intentioned rouses, a tinge of mystery remains. It’s that “what if” feeling. In a world full of unexplained wonders, daily discoveries, and treasures yet to be uncovered, it’s tough not to believe in the unbelievable just a little bit. Just because I’ve never seen anyone fly, doesn’t mean that it’s not possible. Keep on believing.

Jingle bells, bullet shells, Santa kicks some ass. For those of us who retired from writing letters addressed to the North Pole and opted for more adult things such as family drama, fistfights, and money problems, we now have a blood-soaked stocking full that blends childhood and our maturation. Directed by Tommy Wirkola, Violent Night is a very merry massacre. This might just replace Die Hard as your favorite Christmas action film. And yes, it is a Christmas movie. It has heart, humor, and Yuletide homicide. Filled with nods to our favorite holiday classics, near-peak-level brutality, tons of laughs, and a family attempting to mend its wounds, it’s a film that even your Scroogiest friend will enjoy. As Santa has begun to lose faith in humanity due to greed, selfishness, and lack of faith, this could be the last cookies and milk-filled trip around the world. But can a little girl’s selfless wish renew the cheer in old Kris Kringle? Maybe, but first, strapped with a candy cane and his favorite type of weapon, he must save her and her family from an elite crew of mercenaries. He may bring presents, but he also brings pain.

“Welcome to your worst Christmas ever.”

The film does a fantastic job hitting all the right Noel notes. A family comes together for the holidays despite their dysfunction, there’s drama that only the child can navigate clearly, and a Christmas miracle that saves the day and teaches everyone a lesson. And that lesson is, if you piss off Santa, he’ll decapitate you with Nancy Kerrigan shoes. But more seriously, the film is about not taking those you care about for granted and rediscovering what’s important. With all of its one-liners, touching moments, ruthlessness, and corniness, this action comedy is the perfect temperature for the current climate. The film gives your exactly what you want and knows what you’re thinking. You think that character is annoying and you kind of hope they get punched in the face, they make it happen. The fight choreography is fantastic, the score great, and David Harbour’s scars, booze, and tattoos St. Nick all you need under your tree. Violent Night is exactly what it claims to be and more. Its rewatchability is high.

Apart from a middle that feels a bit sluggish, the pacing of the film is rather pleasant. Once the first ho ho ho haymaker is thrown, it’s nothing but blood, bullets, and boughs of broken bones along with a renewed faith. What popped for me was thrilling and creative violence. Who knew that after seeing the bearded Coca-Cola-colored suit molly-whop some criminals, I’d be the jolly one? Santa did!

There are three performances that make this film an outright barn burner. First, there is David Harbour who crushes it as Santa. He brings a relentless yet controlled and compassionate fury to the usual jolly character. If someone asks who my Santa is, Harbour is my new answer—a complete badass. Next John Leguizamo as Mr. Scrooge. This Scrooge may not be rich but he intends to be and with just the right amount of holiday movie cheese sprinkled on top, he’s the perfect villain. Still a curmudgeon as the name would suggest, he commands attention and is not afraid to let bodies drop if necessary. Leguizamo shines in the role like only he can with effortless charisma and a dash of gangsta. Lastly, there is the Home Alone-influenced heart of the film, Trudy who is played by Leah Brandy. Not only does she have great chemistry with Harbour, even if not face-to-face, but she also reminds you why you should never underestimate a child who is scared and just discovered Kevin McCallister and all his traps.

Violent Night is a very merry massacre that might just replace Die Hard as your favorite Christmas action film.