‘Christmas With The Campbells’ Review – “Liked Spiked Eggnog, Gives You The Warm Fuzzies With An Adult Kick” 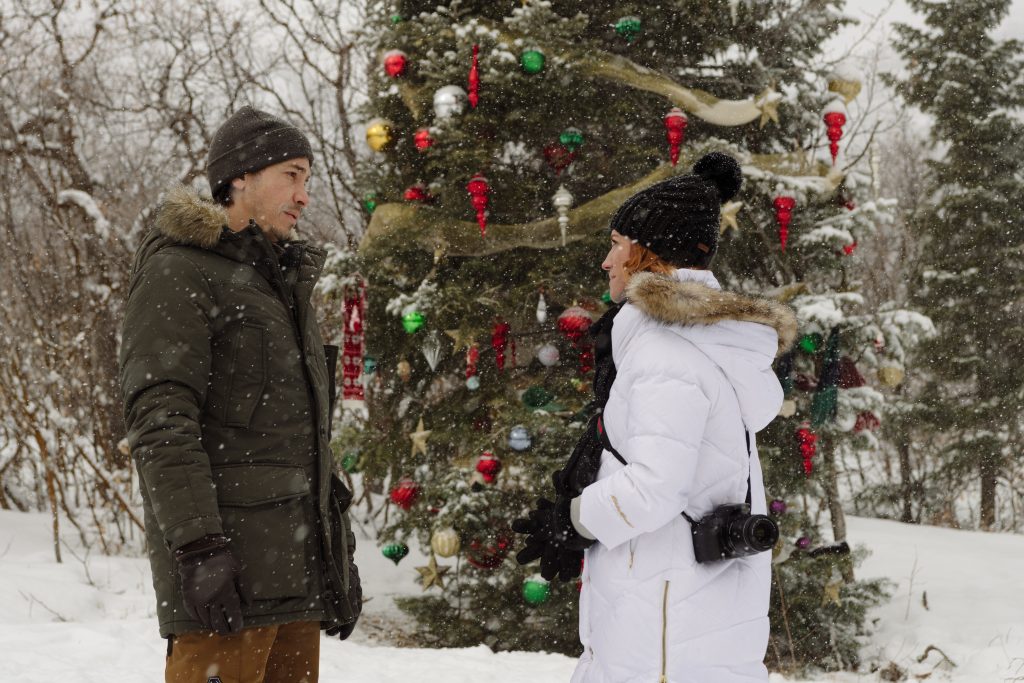 Plot Summary: The traditional holiday romance movie, from the writer of You Light Up My Christmas and the director of The Christmas Bow, gets a little more fun this year with a spin from co-writers Vince Vaughn (Couples Retreat) and Dan Lagana (“American Vandal”). In Christmas with The Campbells, when Jesse gets dumped right before the holidays by her boyfriend Shawn, his parents convince her to still spend Christmas with them, and Shawn’s handsome cousin, while Shawn is away.

Christmas with the Campbells is just one of the almost endless supply of holiday movies being pumped out for a ravenous public. It is a genre that is well saturated with made-for-television fare, but high-quality entries are in short supply. As a means to get more into a festive spirit, anything we can get is appreciated. Director Clare Niederpruem (A Royal Corgi Christmas, The Christmas Bow) and co-writer Vince Vaughn (yes, really) attempt to subvert and also lean into the cinnamon-scented genre. Niederpruem recently summed up the film by saying it was a “family film wrapped in an R-rated bow,” which is exactly the end result. Does it entirely work? Sort of.

Where this movie really shines is in its brilliant cast. Brittany Snow plays our main character, Jesse, and the bulk of the emotional weight and perspective comes from her. Snow has a natural ease in front of the camera and brings believability and relatability to Jesse. Justin Long and Alex Moffat are likewise fantastic, and both actors bring something really special to the project. Rounding out the supporting cast is the legendary Julia Duffy and George Wendt. Both veterans have a lot of chemistry and are able to play off the rest of the cast effortlessly. It’s also a treat to see these well-respected actors play more blue comedy. Yet, they still have their dignity intact whilst retaining that endearing quality that made them both stars.

Outside of the cast, Niederpruem does a great job directing. She really runs with the brilliant idea of an homage to the very specific brand of glossy rom-com Hallmark movies (even though this isn’t technically a Hallmark movie), yet she adds a modern take on the raunchy films of the ‘00s. The movie is also thoughtful in how even the biggest scumbag like Moffat’s Shawn has the ability to grow, rather than just being a one-dimensional character.

Despite offering an overall enjoyable time, the film does have some problems. From an interview with FabTV, Niederpruem stated, “We didn’t want to completely make fun of it, in that way. But we wanted to take it, and put our own twist on it.” Within this quote lies the biggest issue with this movie: It exists in this weird middle ground of self-mocking, yet its also leads with sincerity. This means tone-wise the movie is a bit messy. Some of the jokes land but others feel a bit awkward at times. Not to mention, the subversive elements could have been pushed further to really set this apart as something truly clever. As it stands, now it’s enjoyable but not as effective as it could have been.

A huge amount of credit needs to go to Christmas with the Campbells for managing to stand out in a landscape dominated by so many festive offerings. Director Clare Niederpruem is clearly a big fan of the genre, and that warmth and love she brings does translate nicely on the screen. Pair this with a fantastic cast that brings the warm emotional center, and you have an interesting and wholly unconventional Christmas movie outing. Much like spiked eggnog, Christmas with the Campbells gives you the warm fuzzies of the season with an adult kick.

Christmas With The Campbells is currently playing in select theaters, and it is available to stream on AMC+.

Much like spiked eggnog, Christmas with the Campbells gives you the warm fuzzies of the season with an adult kick.