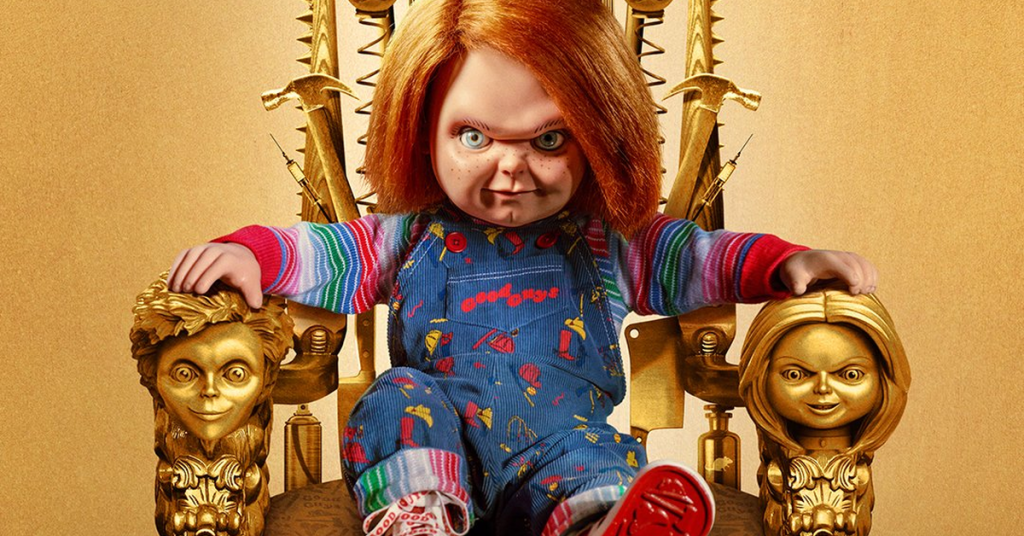 Season one of Chucky was a devilish delight from start to finish, paying homage to the long history of the Chucky franchise while pushing the series in bold new directions. So, the question for season two is simple – how do you top such an enjoyable debut? The answer, as it turns out, is by doubling down on the more grounded, character-driven storytelling found in the first season while also leaning into the campy delights of the more recent Chucky films. Based on the first few episodes, season two of Chucky takes everything great from season one and cranks it to eleven. There’s plenty of meaty character development, bonkers plotlines, and delightfully over-the-top guts and gore. It’s still early days for the overarching storyline, but there are plenty of moments sure to please even the most die-hard Chucky fan. And honestly, what more could you want?

More of the Same in the Best Way Possible

Season two picks up several months after Chucky’s (Brad Dourif) massacre in the season one finale. And in that time, there’s been no sign of Andy (Alex Vincent), Tiffany (Jennifer Tilly), or any of the remaining Chucky dolls. This relative calmness gives Jake (Zackary Arthur), Devon (Björgvin Arnarson), and Lexy (Alyvia Alyn Lind) the chance to try to move on with their lives. But once Chucky drags you into his circle, it’s nearly impossible to get out. Without delving into spoilers, season two takes our heroes out of Hackensack and into the halls of a Catholic boarding school, where Jake, Devon, and Lexy try to make a fresh start. But nowhere is safe when there’s a killer doll trying to hunt you down. And Chucky’s not here to play games. Put simply, these first few episodes play out as a pitch-perfect continuation of season one in the best way possible.

Season two doubles down on the show’s exploration of trauma. As the season begins, it’s easy to see just how traumatized Jake, Devon, and Lexy are. And it’s just as easy to see how poorly each of them is coping with that trauma. Jake blames himself for Chucky’s actions. Lexy self-medicates to assuage her guilt and anxiety. And Devon tries to put Chucky as far in the past as possible – a desire made all the harder by the doll’s untimely reappearance in their lives. And as if that wasn’t hard enough, Jake and Devon struggle to keep their relationship going underneath all of these pressures. Plus, a new character joins the group, Nadine (Bella Higginbotham), Lexy’s roommate at the boarding school. She fits in perfectly alongside the trio, and she’s sure to become a fan favorite (and a thorn in Chucky’s side).

Overall, this season does a great job of exploring these characters and diving into the nuances of their trauma. What’s fun about these characters is that they remain wholly sympathetic even as the morality of their actions exists in this weird gray area. It’s what made season one so compelling and it makes this season just as compelling. That being said, the first few episodes sometimes get overwhelmed by the campier excesses of the overarching storyline. The cast’s gotten so big that it’s hard to give everyone an equal amount of focus. There’s just not enough time to do everything the show wants to do. Hopefully, as the season progresses, some of the under-explored character arcs get a bit more of the spotlight. But still, Chucky’s character work continues to be one of its biggest assets.

Season two leans hard into the campier, more melodramatic parts of the Chucky franchise. I mean, when the previous season ended with an army of Chucky dolls trying to invade America’s hospitals, you kind of have to double down on the absurdity, right? As of the first few episodes, it remains wholly unclear what Chucky’s plan is this season. But he’s clearly out for revenge on those who’ve wronged him – including Jake, Devon, Lexy, and even Tiffany. And speaking of Tiffany, she’s holed herself away with Nica (Fiona Dourif) at her house in Beverly Hills, far away from Chucky’s chaos. Or so she thinks. But the less said about Tiffany’s plotline, the better. All I’ll say is that Jennifer Tilly continues to be an absolute delight this season, and I’m eager to see where her plot leads.

The season makes great use of its new locations, luxuriating in some of the tropes of Catholic boarding schools while also poking fun at them. And without going into any spoilers, this season features some of the wildest Chucky scenes since Cult of Chucky. Plus, if you’re one of those people who felt that season one took too long to lean into some of its more exciting elements, then rest assured that season two doesn’t repeat that. If there’s something in the trailer that you’re excited to see, you probably won’t be waiting too long to see it. That being said, these first few episodes still feel like they exist solely to set up the rest of the season. But given how good season one ended up being, it’s easy to just sit back and let the show take you on whatever ride it wants to.

A Potentially Divisive Mishmash of Tones

I’m very curious to see how fans react to this season. At times, it feels like a wholly different show than the first few episodes of season one. This season careens wildly between grounded drama and over-the-top camp. And while I enjoy how over-the-top the season gets, some might really dislike it. There’s one episode, in particular, that’s so tonally different from everything else that I’m really curious to see how everyone reacts to it. I loved it to death, and it’s easily my favorite episode of the ones I’ve seen. But I can also see some people not digging it. It’s the kind of risk that requires a lot of confidence, but I think it ultimately pays off.

And I think that’s true for these first few episodes as a whole. They’re risky. Some people are gonna love it and some people aren’t. Those who appreciated some of the earlier episodes of season one might be put off by how outrageous parts of season two feel. And those without an encyclopedic knowledge of the Chucky franchise might end up feeling a bit lost by some of what happens this season. Honestly, the first few episodes of season two are a lot to swallow if you’re not quite prepared for them. But if you’re game for all of the season’s excesses, then you’ll probably find a great deal to like here. Season two of Chucky isn’t content to rest on its laurels, and it’s all the better for that.

At the end of the day, if you liked season one of Chucky, you’re gonna enjoy season two. Season two doubles down on what made the first season enjoyable while leaning even harder into some of the Chucky franchise’s campier elements. The character work is superb, the gore is devilishly delightful, and the plotlines are more melodramatic than ever. Everyone in the cast brings their a-games. Zackary Arthur, Björgvin Arnarson, and Alyvia Alyn Lind are as relatable as ever. Bella Higginbotham effortlessly melds into their dynamic, playing perfectly off the trio. Jennifer Tilly, Brad Dourif, and Fiona Dourif are delightfully over-the-top. And Brad even gets to stretch his Chucky chops – but no spoilers from me!

This time, I feel like showrunner Don Mancini and the rest of the writing team have found a great balance between drama, comedy, and horror. While it remains unclear exactly where this season’s story is headed, it’s already clear that we’re in for one hell of a ride. No matter what aspect of the Chucky franchise is your favorite, there’s something in season two of Chucky that’s sure to please you. And honestly, when every episode is as much fun as these are, is there really anything to complain about?

Season two of Chucky airs Wednesdays at 9 pm on SYFY and USA Network.

While it's still too early to see exactly where the story's going, season two of "Chucky" is every bit as delightful as the first. The character work is superb, the gore is devilishly delightful, and the plotlines are more melodramatic than ever. And honestly, what more could you ask for?