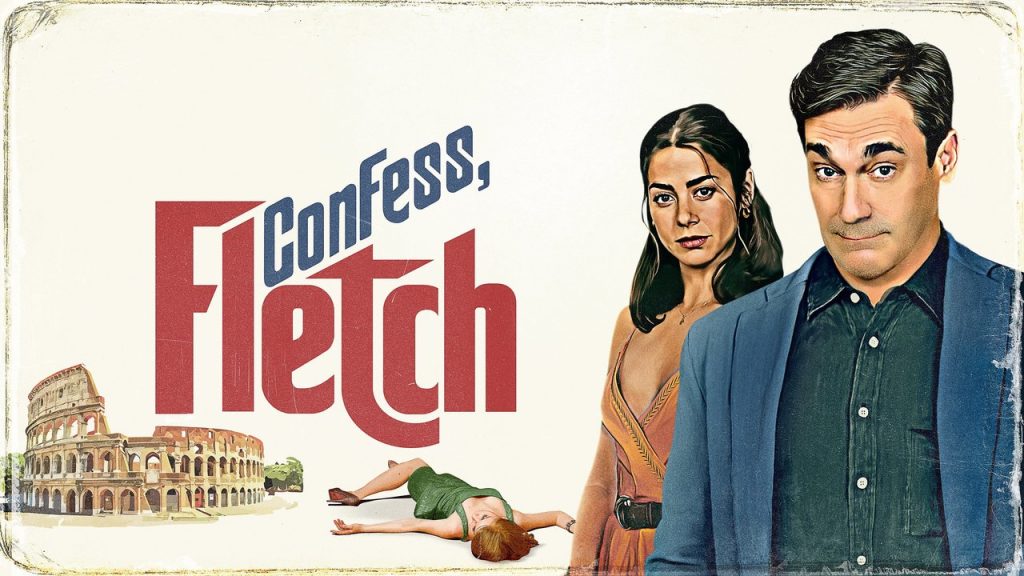 Irwin Maurice “Fletch” Fletcher has been many things since novelist Gregory McDonald introduced him in the 1974 comedy-mystery Fletch. He is an investigative reporter by trade. But, over the course of nine books he found his way to amateur detective, bumbling paramour, and even Hollywood fixer. A massive hit, the series spawned two 1980s films starring Chevy Chase as Fletch. Since the second premiered in 1989, Fletch has stayed off our screens. There were fits and starts. Stars like Ben Affleck and Jason Sudeikis attached to reboots, but none ever went anywhere. That changes this year with Confess, Fletch (2022), an adaptation of McDonald’s second novel that sees Jon Hamm take up the mantle.

We catch up with Fletch as he arrives in Boston. He’s staying in an elegant townhouse that also sports an unexpected dead body in the living room. For all of Fletch’s nonchalance when calling the police, Detective Monroe (Roy Wood Jr.) and his partner Griz (Ayden Mayeri) understandably suspect Fletch. Through a series of flashbacks interspersed with Fletch’s Boston escapades, we learn that he is in town on behalf of his new gal pal Angela (Lorenza Izzo), whose aristocratic father has been kidnapped. The ransom? A Picasso painting from his private collection. The problem? Someone stole a slew of paintings, including the Picasso. Smack in the middle of overlapping mysteries, Fletch works to find the paintings, prove his innocence, and get out alive.

The immediate joy of Confess, Fletch is the chance to soak in Hamm having an absolute ball. Most famous for his excellent dramatic work in Mad Men (2007-2015), it’s easy to overlook the sheer number of comedic supporting roles he has excelled in over the years. He was one of the best parts of the misbegotten Baby Driver (2017), chewed up every scene as Gabriel in Good Omens (2019-), and was a part of one of my personal favorite SNL sketches, “Hamm and Bublé.” Confess, Fletch affords him the opportunity to step into a lead comedic role, and he unsurprisingly excels. Hamm plays Fletch as a charismatic asshole teeming with quirks. He prefers to go barefoot whenever possible. Makes sure to constantly mention he was an “investigative reporter of some repute.” You can feel him pushing against his expected dapper Don Draper typecasting in every beat.

Hamm is joined by a game cast that embraces a variety of complimentary comedic flavors. Wood Jr. and a standout Mayeri provide winning foils, their exasperation for this enigma dripping from every line reading. Add into the mix my beloved Kyle MacLachlan as a germaphobe art dealer, Annie Mumolo as a scene-stealing unhinged neighbor, and Marcia Gay Harden doing her best Lady Gaga in House of Gucci as the utterly campy Countess and you end up with a cascade of wonderful bits. Zev Borow and Greg Mottola’s script revels in feeding these actors increasingly nutty lines all while moving the mysteries along. The comedic synergy means that you are most often laughing while also picking up a stray clue here and there as Fletch prods at these overeager personalities.

Unfortunately, what stops Confess, Fletch from truly flourishing is Mottola’s, frankly, tedious direction. His tendencies to opt for the most obvious shot choice and avoid varying his camera’s motion suck the verve out of otherwise engaging scenes. Take the sequence where Fletch goes up to Eve’s (Mumolo) apartment. It is an exposition dump. Eve sloshes out juicy information on her neighbor, the man Fletch suspects of killing the woman he found in the townhouse. While she talks, Eve rips off a series of increasingly absurd bits, culminating in her setting her stovetop on fire and acting completely unbothered. Hamm and Mumolo are fully committed, and the writing is smooth. Yet, Mottola’s reliance on dull shot-reverse-shot and little more undercuts what should be a crown jewel of a scene. It is the film’s constant issue and one that is nearly a fatal flaw.

Confess, Fletch is a performer showcase with a tight story that nonetheless ends up ringing a touch hollow. Great comedy films, as Mottola gave us before in The Daytrippers (1996) and Superbad (2007), must be both funny and aesthetically dynamic. Without the latter, the experience skews toward reading a good comic strip; funny, well-written, but static. You can feed Hamm and company as many banger lines as you want, but without a directorial vision that works to heighten and compliment the comedy, Confess, Fletch maxes out as a perfectly fun time at the movies that could have been so much more.

Confess, Fletch is in theaters September 16, and starts streaming on Showtime October 28.

Confess, Fletch maxes out as a perfectly fun time at the movies that could have been so much more.