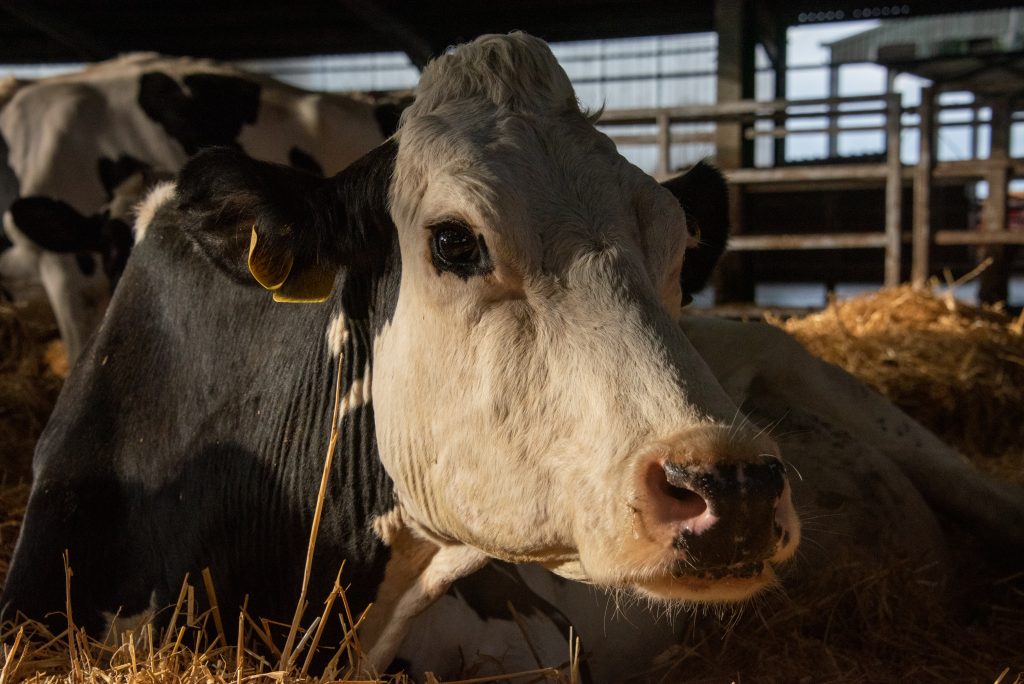 Up-close and unflinching, the opening to Andrea Arnold’s first ever documentary, humbly titled Cow, is a microcosm of its entire 94 minute journey. I don’t know about you, but I have never gone out of my way to watch a cow give birth. I wouldn’t have been opposed in theory, the miracle of life is a beautiful thing after all, but there are less messy things to be entertained by. Watching farmers extract a limber calf from its mother’s womb makes the high school birthing video feel like a walk in the park.

But Arnold and her team already know you wouldn’t have watched it on your own accord, so they make you do it. And it’s wonderful. Over the course of several long takes, you are exposed to the formative moments of a new life. The mother cow, Luna, licks her newborn baby after it struggles to take its first steps. It’s an unnarrated, unfiltered moment of love and humanity. Now you’re kinda glad you had to sit through the yucky stuff.

We live in a world in which we take and take and take from these creatures, as the documentary makes light of. But we sometimes forget the lives that lie behind the closed farm doors, if we ever knew them at all. Cow is an antidote to this kind of ignorance, portraying the harsh realities of the dairy industry through the big, black eyes of the very animals that live through it.

Like many verite documentaries that came before it, Cow is attempting to present life as it is: there is no NatGeo narration, no visible story structure, and the camera is often low to the ground and close to the action. Maybe a little too close? A few select moments have Luna bumping into the camera, forcing the filmmakers to get the hell out of her way. For all of its formal nakedness, you never quite forget that there’s a camera capturing all of this, that Arnold’s hands are on the wheel.

That being said, there’s no virtue signaling. Arnold insists the movie is not about animal rights, nor women or women’s bodies. I’m inclined to believe her, despite how tragic it is watching Luna’s life be shaped by and ultimately succumb to an assembly line. Luna is milked by technology that grasps and pulls on her udders through automated suction. Held sideways and off the ground, her muddy hoofs are sheared like whittled sticks. Shortly after giving birth, she is examined by a doctor who invasively shoves his arm through her birth canal despite reporting that it is swollen. Once she has healed, they waste no time in pairing her with a male cow to repeat the process.

But there’s beauty to be found even in the darkness. When the time comes to do the deed, Luna and her lover circle each other like it’s a dance, backlit and accompanied by surprisingly romantic music over the loudspeakers. The circumstances aren’t ideal, but there is something to behold here. When the humans are away, the animals will play.

In one of the film’s most inspired sequences, Luna is sent outdoors to graze with several other cows in the farm. The herd moves at an uninhibited speed, which feels like a rush juxtaposed to the film’s stoic nature at that point. Luna eats grass and walks around, admiring the wide, open spaces. At night, fireworks light the sky. It’s a moment of victory and release, though underpinned by a kind of loneliness.

Early on in the film, Luna is separated from her calf, the one she gives birth to in the very beginning. Arnold does spend some time with the calf, who is his own character struggling through the system. In the film’s second most heartbreaking sequence (I shan’t dare spoil the first), he is dehorned, an absolutely grueling process in which a searing hot iron burns through a calf’s horns and skin, destroying the tissue that allows the horn to grow. The farmers attempt to anesthetize the innocent calf but his resistance is persistent, even as he is forcibly held down. They eventually finish the job, leaving ugly, spray-painted blue spots to signify their handiwork. Thankfully, the calf has made two new friends since being separated from Luna. They comfort him after being dehorned with licking, reminiscent of the film’s opening scene.

It is these vignettes, paced with an excellent balance of narrative momentum and visual breathing room, that give this blunt documentary enough story and character to leave a lasting impression. But that’s all just laying groundwork. It’s just enough breadcrumbs to follow the trail, but its endgame leaves much more up to the viewer than most films of this nature would allow. It’s not Cowspiracy, that’s for sure.

It is ultimately up to you to decide for yourself what your relationship is to these animals and the lives they lead. But you wouldn’t have even considered a decision had Arnold not portrayed them as honestly as she does here. In that sense, this movie is a bonafide miracle. When all is said and done, there is no perspective more powerful than suggesting an animal life is as human as your own.

Cow is currently playing in select theaters and is available On Demand.