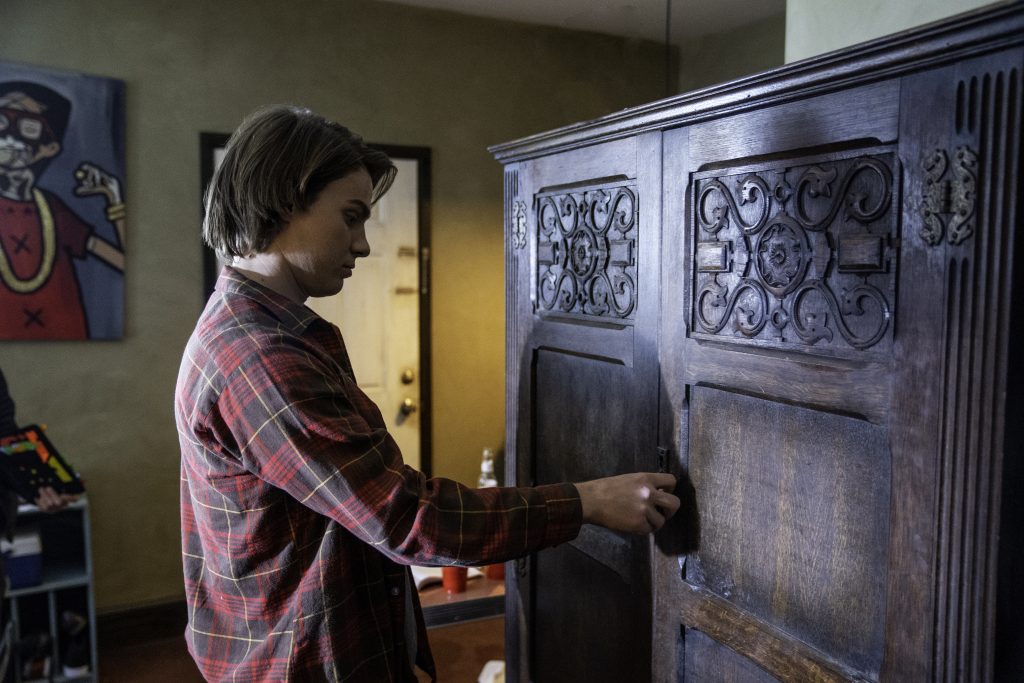 This week’s episode of Creepshow features another strong pair of stories with wildly different tones. In the first story, a law student learns that borrowed time always comes with a cost. And in the second story, a town librarian uncovers an ancient threat endangering her small town. Both stories are solid, with one feeling like something straight out of The Twilight Zone, and the other being an animated horror delight. The performances are strong, the atmosphere is creepy, and both stories work remarkably well.

Tim finds the answer to always wishing there were more hours in the day, but the success he can now achieve might not be worth the cost.

Written by Barrington Smith & Paul Seetachitt and directed by Jeffrey F. January, “Time Out” feels more like a Twilight Zone story than a Creepshow one. In a good way, though. After inheriting a mysterious wardrobe from his grandmother, law student Tim (Matthew Barnes) discovers he can quite literally create more hours in a day. But as his grandmother warns him, borrowed time is never free – a lesson he’ll have to learn the hard way. “Time Out” is one of those Creepshow stories devoid of any kind of physical, monstrous threat. Instead, much of the fear comes from the slow, existential dread of the passage of time – a premise that wouldn’t be out of place in a Twilight Zone story. After all, it’s scary watching time tick on by while you try to make the most of it.

Much of the story hinges on the personal drama between Tim and his wife, Lauren (Devon Hales). Both Barnes and Hales deliver fantastic performances, perfectly capturing this conflict. You can feel Lauren’s worries about her husband as she watches him grow older and frailer far quicker than he should. And you can see Tim’s internal struggle deciding the best way to spend his time. To me, “Time Out” feels less like a traditional horror story and more like a morality play. It falls pretty squarely into the “be careful what you wish for” style of storytelling. But Smith, Seetachitt, and January put a suitably Creepshow twist on the idea, delivering a story that’s full of dread and genuine emotion. Put simply, “Time Out” is an excellent story, executed extremely well.

“The Things in Oakwood’s Past”

The town of Oakwood has a storied past, and the opening of a time capsule is an exciting moment of remembrance. But can a local librarian keep a darker part of the town’s history from repeating itself?

Written by Daniel Kraus and Greg Nicotero, directed by Greg Nicotero & Dave Newberg, and with animation directed by Enol Junquera & Luis Junquera, “The Things in Oakwood’s Past” pays homage to many other creepy town stories. After finding a time capsule referenced in some old, obscure journals, town librarian Marnie (Danielle Harris) becomes convinced an ancient evil is preparing to wipe out Oakwood. Unfortunately, only Mac (Ron Livingston), a local news reporter, believes her. It’s a great premise. And the team executes it well. The problem is that it’s all too fast-paced. With only a 23ish minute runtime, there just isn’t any room for Kraus, Nicotero, and Newberg to let the story’s inherent suspense brew before moving along to the next bit. And there’s just never enough time to soak up the atmosphere. So, being squashed into such a small runtime robs the story of a bit of its effectiveness.

It still works well, though. There are plenty of twists and turns to keep audiences on their toes. And the climax is thrilling and deeply horrifying. It’s the kind of horror that’s best achieved through animation. And speaking of the animation, it’s solid – though heavily stylized and occasionally uneven. The character designs take some time to get used to. But their design fits nicely with the way the characters are written. And the backgrounds and creature designs are absolutely gorgeous. My only complaint is that the facial animations don’t always do justice to the performances delivered by the cast (which also includes Mark Hamill!). But still, it’s a minor problem to have when the episode works as well as it does. So, while I wish the story had been longer, “The Things in Oakwood’s Past” is a solid mystery, with some fun characters, solid animation, and a horrifying climax.

Both of the stories in this week’s episode worked very well. While I wish “The Things in Oakwood’s Past” was significantly longer, I can’t pretend that I didn’t enjoy it. And “Time Out” ended up being one of those perfectly creepy morality tales that stick with you in the way the best Twilight Zone and Creepshow stories do. While neither story was particularly scary, the dread that permeated “Time Out” hit me on an emotional level. And the all-out horror show that forms the climax of “The Things on Oakwood’s Past” is a lot of fun. Much like last week’s episode, this week’s stories are worthy additions to the Creepshow canon. The performances are great, the stories are solid, and I had so much fun watching these tales play out.