‘Crush’ Movie Review: A Charming and Progressive Queer Rom-Com With A Likeable Lead 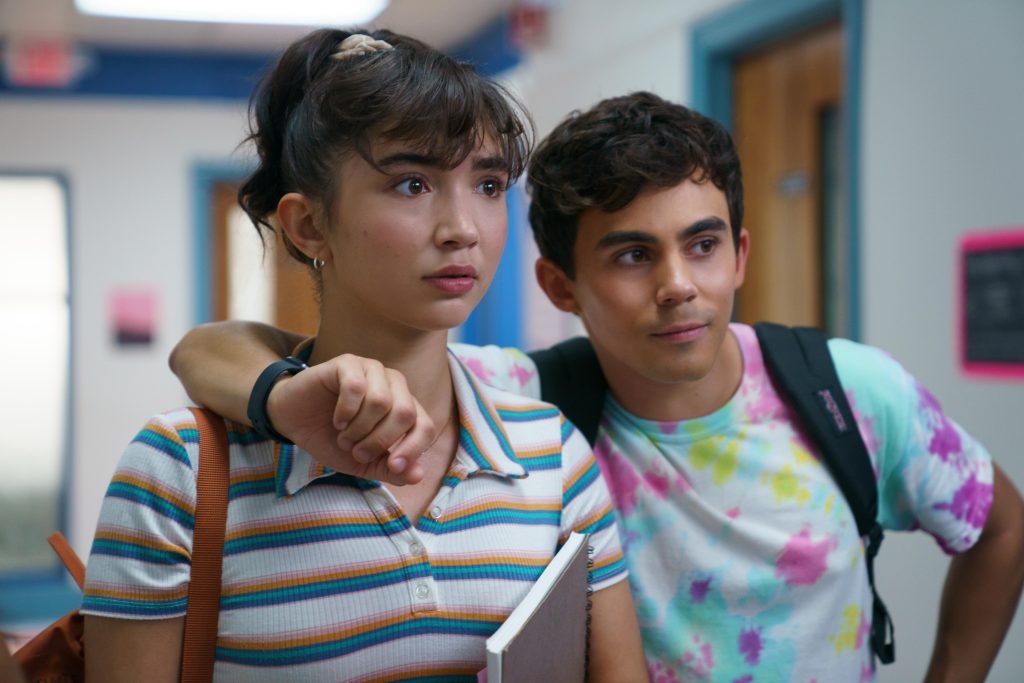 The premise of Hulu’s new teen drama-comedy, Crush, is familiar, but executed with an inclusive and unique spin.

Openly gay high school student, Paige (Rowan Blanchard), is stressing about getting into her dream art school and harboring an unrequited crush on her classmate, Gabriela (Isabella Ferreira). When she isn’t pining for Gabriela, she’s spending time with her best friend and platonic soul mate, Dillon (Tyler Alvarez), and living with her supportive and progressive mother, Angie (Megan Mullally). Paige’s future is jeopardized when she’s accused of being an anonymous graffiti artist known as King Pun. This makes her public enemy number one in the eyes of her high school principal (Michelle Buteau).

In a desperate attempt to avoid suspension, Paige vows to identify the real King Pun and joins the track team to appease the track coach (Aasif Mandvi). It will also provide her the chance to get closer to Gabriela. Things take a messy turn when she befriends, AJ (Auli’i Cravalho), Gabriela’s litter sister, and sparks fly between the two. As Paige grows closer to both sisters, she must ultimately decide which of them is best for her.

Similar to the recent Netflix series, Heartstopper, Crush is a coming-of-age drama/comedy that puts queer characters front and center within storylines that are usually granted to their heterosexual counterparts. Centering more stories on LGBTQ characters allows for more refreshing and inclusive spins on familiar tropes. I’m loving this trend, and look forward to seeing it continue.

Blanchard is a great lead, and she really sells the character to the audience. She portrays Paige as talented, ambitious, a hopeful romantic, but someone who is woefully ignorant to what she really wants and needs in a girlfriend. Watching her feelings for AJ develop, and witnessing their genuine connection, is one of the most refreshing things about the film.

Cravalho does a great job of portraying the rebellious, but fun loving, AJ. She’s tired of living in the shadow of her older sister, but is still supportive of Paige when it seems she might choose Gabriela. My only criticism of the film is that there’s a predictable revelation about AJ that comes during the film’s climax and gets completely ignored afterwards. There are no repercussions and it isn’t mentioned again. I would have really appreciated more of a reaction from the other characters.

It was very refreshing to see Ferreira, who is best known for her role on the Hulu LGBTQ teen drama, Love, Victor, gets a chance to show off more of her acting chops. Here, she portrays Gabriela as an overachiever who is cracking under the pressure of her perfect façade. She also feels guilty that she unintentionally overshadows her younger sister.

All the actors here do a great job, and the additions of Mullally, Mandvi, and Buteau are the welcome as each fills the role of the comedy relief adult. Crush is a charming romantic comedy with an inclusive and queer spin on the usual high school love triangle narrative.

Crush is currently available to stream on Hulu.

Crush is a charming romantic comedy with an inclusive and queer spin on the usual high school love triangle narrative.