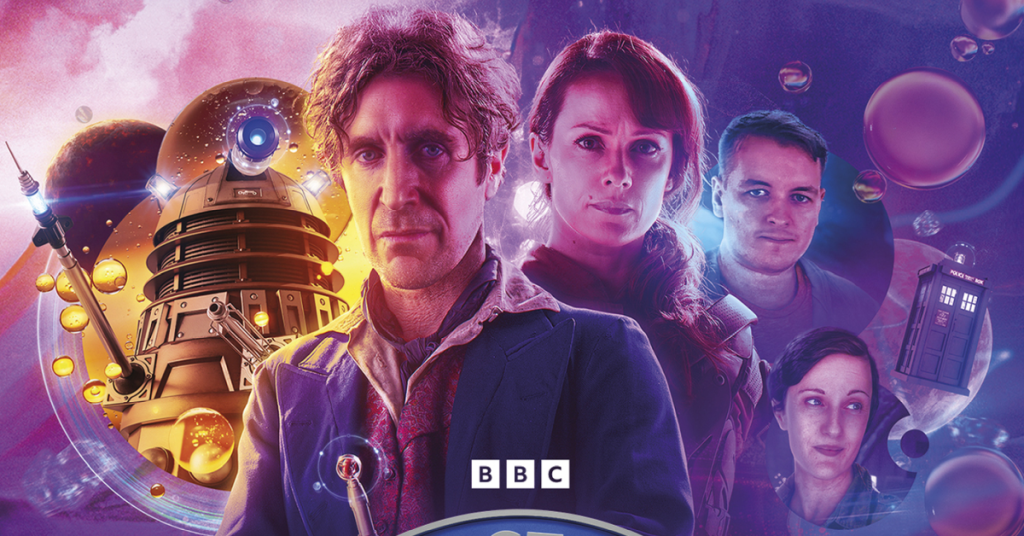 In 2013, Paul McGann’s Eighth Doctor blasted back onto TV screens in Night of the Doctor, a prequel to Doctor Who’s fiftieth anniversary special. In that mini-episode, the Eighth Doctor briefly met Cass, a pilot of a crashing starship. That fateful meeting ultimately led to the Eighth Doctor’s regeneration into John Hurt’s War Doctor. But what if that’s not how their meeting went? What if Cass became one of the Doctor’s companions, and traveled around space and time with him? That’s what Big Finish’s latest entry in their ongoing “Time War” series, Doctor Who: Time War 5: Cass explores.

If jumping headfirst into the fifth entry of an ongoing series sounds daunting, fret not. Doctor Who: Cass acts as a perfect jumping-on point for new listeners. While it does feature a few nods here and there to past adventures, it’s mostly a self-contained, mind-bending romp through time and space in the best way possible.

The Doctor (Paul McGann) and his great-grandson, Alex (Sonny McGann), arrive on an errand-class starship just as weird time anomalies start occurring. Meanwhile, Cass Fermazzi (Emma Campbell-Jones) begins her first day on the very same ship – and gets dragged into the weird world of the Doctor and the Time War. It’s a suitably timey-wimey start to this latest entry in Big Finish’s ongoing “Time War” series, but it’s the kind of mind-bending story that perfectly comes together in the end. Foley crafts a story where all of the strange occurrences eventually build up to an immensely satisfying climax. The less said about the actual plot, the better. Except that I really hope Hieronyma Friend (Jaye Griffiths) returns in some capacity.

Those hoping for a more concrete follow-up to the previous “Time War” set’s cliffhanger won’t find that in this story. But what we do get is a very fun romp with the Eighth Doctor and his great-grandson. Paul McGann and Sonny McGann play off of each other brilliantly, though I did find myself missing that hint of shared history the characters should have had, given everything that happened the last time we saw Eight and Alex together. (Though, in fairness, those events are hinted at here, and will likely be wholly addressed at some point in a future box set.) As for Cass, it’s a delight seeing her again after her all too brief appearance in Night of the Doctor. Campbell-Jones makes for a great addition to this crew, acting a bit like a straight man to Eight and Alex’s insanity.

All in all, Meanwhile, Elsewhere is a fantastic opening story, perfectly setting the scene for the rest of the box set. (8.5/10)

Cass’s first adventure in the TARDIS brings the crew to the wreckage of a lost ship, the Vespertine. Except the ship isn’t lost, nor is its captain. But how can that be? And why does the captain, Hudson Sage, seem to recognize the Doctor? As a standalone episode, it’s somewhat forgettable. The story waits too long to delve into what’s actually going on, so too much time is spent running around in circles, with all of the characters a bit too clueless as to what’s going on. But once all the pieces are on the table, things pick up greatly. It just takes a bit long for that to happen. That being said, the story works pretty well as the second installment of an ongoing storyline. The boxset’s central mystery gets properly introduced here, in a very tantalizing manner.

Character-wise, this story is very much Cass’s. It’s her first adventure on the TARDIS, her first chance to really see the universe. And it very much doesn’t go according to plan, in almost the worst way possible for her. Campbell-Jones gets some very meaty moments here, mostly opposite Sonny McGann. And those are a joy to behold. As for Eight and Alex, they don’t do as much here, outside of setting up the boxset’s overarching plotline. But you do get hints at their relationship this time around, and it’s very sweet seeing the way both of them clearly care very deeply about the other.

Overall, Vespertine is a fun listen but not a particularly memorable story outside of how it progresses the overarching plot. (6.5/10)

Previously, Next Time by James Moran

After the TARDIS crashlands on a seemingly uninhabited planet, the Doctor, Alex, and Cass uncover a mystery so dangerous it could destroy the universe as we know it. And at the center of everything is, of course, the Daleks. At the same time, the TARDIS crew encounters an inhabited planet with no knowledge of the Time War or the Daleks. Something unusual is going on with time. But what is it? All roads lead here, to this box set’s two-part finale. And it’s a very typical Big Finish kind of story. It begins in media res, with the story jumping backwards and forwards in time. It’s not hard to follow, or anything, but it does result in the first part feeling a bit slow. However, the second part really delivers in all the ways the finale of a box set should.

Many of the set’s ongoing questions get answered here, although they’re not necessarily answered in definitive ways. To say more would be far too spoilery, but let’s just say there are so many avenues future Time War box sets could travel down as a result of this story. This is a story that focuses more on untangling the messy web of the box set’s overarching storyline rather than on its characters. But, once again, Cass and Alex get some lovely scenes together, with Cass really having to grapple with the Time War’s impacts on civilizations that sit on the outside of the war. And those scenes are easily among the story’s best.

Ultimately, Previously, Next Time is a pretty satisfying conclusion to this latest entry in the “Time War” series. It doesn’t bring this chapter of the Doctor’s life to an end, far from it. Instead, it promises a very exciting future. (8/10)

At the end of the day, Doctor Who: Cass offers endless amounts of fun. In fact, this is the most fun the Time War range has felt in quite a while. The Eighth Doctor and Alex make quite a pairing, even if the set doesn’t do as much as you might hope with the idea of the Doctor’s long-lost great-grandson suddenly being a part of his life again. And it’s such a joy getting to spend a lot more time with Emma Campbell-Jones’ Cass, given how little time she got in Night of the Doctor. At its heart, Doctor Who: Cass is a deeply enjoyable romp through time and space, featuring a trilogy of mind-bending, timey-wimey adventures. And the way the final story sets up the next box set is absolutely brilliant.

If you’re looking for a good Doctor Who fix in these quiet months leading up to the 60th anniversary, then Doctor Who: Cass might just scratch that itch. 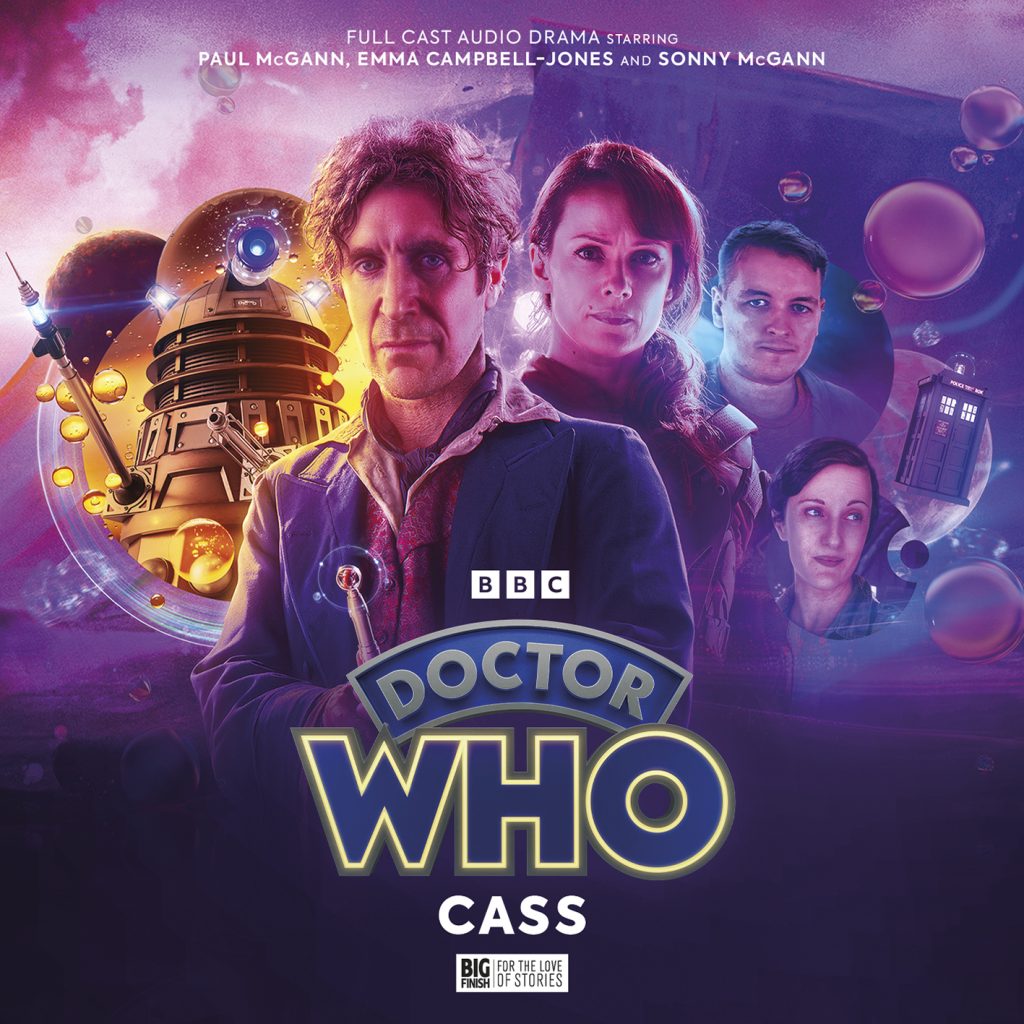 Big Finish Productions revives their Eighth Doctor Time War series with "Doctor Who: Cass", delivering a trilogy of mind-bending, timey-wimey romps. It makes for a great jumping-on point if you're new to the series while also offering plenty to satisfy longtime fans.