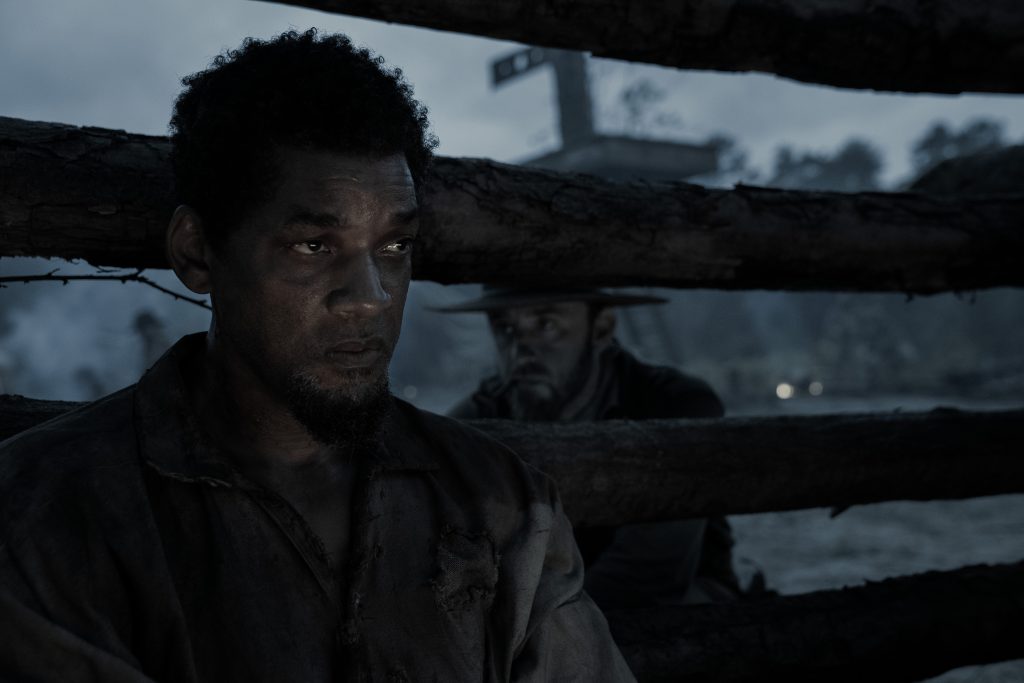 The cruelty was the point.

Hollywood often struggles with what should be an obvious observation about American slavery. Films handle the violent barbarism just fine, to the point it can feel exploitative of Black pain. They don’t often, though, examine the motivations behind the viciousness. Few filmmakers have the courage, or the language, to address the self-awareness of slavery’s perpetrators and observers. They understood the evil that powered each whip, but they continued, for economic prosperity, debased satisfaction, and existential fear that those in bondage would reap what their captors had sowed.

In Emancipation, director Antoine Fuqua gives voice to that sickening reality. The words are spoken over a late-night campfire by Jim Fassel (Ben Foster), a sadistic slavemaster in relentless pursuit of Peter (Will Smith), an enslaved man who escapes after learning that President Abraham Lincoln has declared enslaved people free. Peter’s persistence in his path to freedom surprises Jim’s two partners. With a chilling detachment, Jim details the fallacy in their logic by way of a childhood story. He fully comprehends that enslaved people are human beings, not property. However, he prefers the economic and social dominance that white supremacy offers. He invests heavily to protect the status quo and keep slaves from exercising the resilience and resolve they have as human beings.

That acknowledgment is deeply powerful and nearly enough to justify Emancipation’s barrage of torture. Fuqua is unflinching in depicting slavery’s final gasps, keeping the savagery in plain sight at all times. He pans through landscapes littered with body parts and corpses. Blows to flesh land in your ears with resounding, head-rattling thuds. There is little reprieve; even scenes of quiet and reflection display grimy, skin-itching horror in the background. It is often too much, but if you remember, “the cruelty was the point,” something resembling profundity emerges. The film seeks to strike square at white supremacist ideology, to convey the inhumanity it breeds, the destruction it ensures, and how the human spirit and body can survive it.

Emancipation struggles to realize that powerful message fully. It doesn’t help that Fassel’s monologue, what could be the film’s clarifying thesis, comes halfway through the film. What precedes it is that torturous barrage: the beatings, the screaming, the shootings, the stabbings, all in unsparing detail. It is so relentless and shocking that dissociating from what’s on-screen feels necessary. (As a Black man myself, watching the film would’ve been unbearable without some cognitive distance.) To Fuqua’s credit, he doesn’t exploit the abuses committed against Peter and the other enslaved people. He isn’t seeking to evoke pity or morbid curiosity about Black suffering. However, the neverending brutality is numbing, reinforcing its gratuitousness.

Even if you stay enmeshed in Emancipation’s painful world, Fuqua’s creative choices stand out, not in helpful ways. The film sometimes feels unfocused, hampered by stylistic flourishes that lack cohesion. The cinematography is the most noticeable. Rather than being in full color or black-and-white, Emancipation has a deeply unsaturated palette that often reads monochromatic. The challenge is understanding the color grading’s thematic purpose. It at first seems like the saturation is increasing, from mottled grays to true vibrance, to coincide with Peter’s proximity to freedom. It’s an intriguing choice that doesn’t bear fruit, and the visuals end up being a needling distraction. Fuqua’s fast-speed pans, crane shots, and slow-motion shots are also distracting. These decisions give the film a hyper-stylized aesthetic that opposes its sobering brutality. Some scenes blur the line between fantasy and reality, leaving for a discombobulating and baffling experience once you realize the moment is real.

The central issue with Emancipation may lie with Peter, its main character. In a way, the film plays like a one-man show, closely following Peter on his journey to Baton Rouge to secure his freedom. However, we don’t know Peter, except that he and his family are from Haiti and are deeply religious. We get very few glimpses of how he feels, what he struggles with, and what fortifies his resolve. That disconnect makes it easy to, at times, regard Peter’s experiences as a checklist of atrocities rather than a human being’s story. The flat characterization also leaves Will Smith with few emotional beats to play. That said, he delivers a powerful performance of typical movie star presence and atypical unvarnished physicality and skill. Smith will likely draw comparisons to Leonardo DiCaprio’s physically demanding performance in The Revenant, but Smith deserves consideration on his own merits.

There is a painful irony at the heart of Emancipation. Peter is not a fictional character. He is the subject of one of history’s most harrowing images: a Black enslaved man revealing his heavily scarred and welted back to the world. The film’s intent, one might assume, was to tell the story behind that unforgettable image, to give that man a voice. Sadly, Emancipation loses that voice, and its focus, amidst baffling creative decisions and deadening brutality. The film, try as it might, is merely an extension of that image, trapping Peter rather than setting him free. Even if it is the point, Peter deserved better than the film’s intolerable cruelty.

Emancipation is currently playing in select theaters. The film will be available on AppleTV+ beginning December 9, 2022.

Antoine Fuqua's 'Emancipation' is an unflinchingly brutal and baffling film