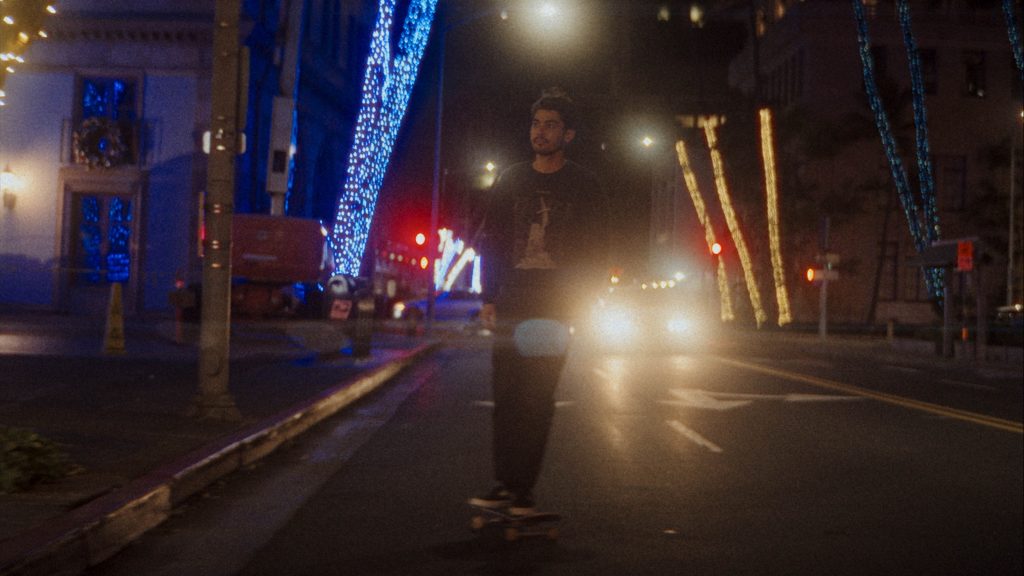 Naz Kawakami appears in Every Day in Kaimukī by Alika Tengan, an official selection of the NEXT section at the 2022 Sundance Film Festival. Courtesy of Sundance Institute.

Every Day in Kaimukī (2022), Alika Tengan’s debut feature, follows Naz (Naz Kawakami) in the days and weeks leading up to his impending move from Kaimukī, Hawaii to New York City. Even though Naz has harbored hopes of growing beyond his hometown, it takes his girlfriend Sloane’s (Rina White) acceptance into a prestigious art program at the Pratt Institute to finally motivate the big move. Naz sees it as his way out from simply floating through his days working and skateboarding, and nights volunteering as a DJ at a community radio station. His friends do not believe he will actually go through with it, venturing as far as to start a betting pool. Yet, even as cracks appear in the plan and his relationship with Sloane, Naz latches onto the dream of finding “more” out there in the world beyond his island.

Tengan co-wrote the script with Kawakami, and their story struggles to locate a sense of novelty within the well-tread genre of the mid-20s man sifting through an existential crisis. The Hawaiian location and focus on native Hawaiian characters is refreshing in a film most often fixated on white guys in Brooklyn, but the narrative within those confines remains hazy. Dynamic scenes surface here and again, most often when Naz is at the radio station or spending time with his skateboarding friends, but Every Day in Kaimukī ends up feeling too comfortable doing the exact sort of floating its protagonist is so afraid of doing. Yes, there is an argument to be made that it is an intentional choice to reflect Naz’s emotional state. Yet, even if that is the case it never coalesces into a compelling enough narrative to justify the languid approach of the storytelling.

In addition, Tengan and Kawakami struggle to imbue the characters beyond Kawakami with any heft. This is most obvious when it comes to his scenes with White, whose work as Sloane suffers from the dual shortcomings of an underwritten character and a passionless performance. Of the former, there’s little White can do. Sloane exists as an obstacle for Kawakami to sort through, an issue he must resolve before reaching his own self-actualization by choosing New York City on his own terms. For that, there is further shame on Tengan and Kawakami for spending so little time in their script developing the, theoretically, second lead. Some actors are able to take an underwritten role and draw a few memorable beats from the darkness, but White feels rather miscast here. She and Kawakami have no chemistry, which makes it quite impossible to invest in their relationship, therefore expunging the stakes from one of the central plot points.

Kawakami’s performance is nonetheless a saving grace. Naz’s character is defined by his conflicting urges to stay still and avoid facing his rampant anxiety about change, and his mounting fear that he will fail to accomplish anything worth a second thought. Kawakami conveys this mostly through a deft physicality. He’s constantly fidgeting with his hair, unable to stand too still for too long, and only seems settled when he’s on his skateboard. In one of the films’ more propulsive sequences, Naz gets drunk and ends up seeking out fights with the few friends he has left around. On top of nailing the image of self-hating drunkenness, Kawakami adeptly turns on the rage, expelling in a few short scenes all the repressed terror he’s been holding on to. It works because he has effectively laid the emotional groundwork even when the script, which he is incidentally partially responsible for, falls through.

Behind the camera, Tengan has an eye for beauty that serves him well in mining memorable images throughout the film. An opening sequence of Naz skating through the streets captures the haunting emptiness that plagues the character throughout the film. The repeated image of Naz climbing into bed with a sleeping Sloane when he returns from the station is one of the more poignant visual beats of the whole runtime. Elsewhere, Tengan doles out handheld shots that match Naz’s energy nicely. A favorite scene in the film unspools as a handheld long take where Naz is arguing on the phone with an airline about how to “stow” his cat for the flight, all the while trying to successfully get a handful of Craigslist buyers into and out of his apartment with the right goods. It culminates in Naz locking himself out of both the car and the apartment and is a prime example of the sort of kinetic filmmaking Every Day in Kaimukī would have benefitted from containing more of.

However, Tengan’s choice to shoot Every Day in Kaimukī in a 4:3 aspect ratio with the faded look and palette of a polaroid gives the whole project the unfortunate quality of appearing like a particularly angsty hipster’s Instagram feed. Extrapolating that out to every portion of the film, I cannot help but see it as somewhat a shrunken and less accomplished retread of Inside Llewyn Davis (2013), all the way down to the main character’s connection with a cat. There are moments of great filmmaking and Kawakami shows great promise as a leading man, but the end result is a relatively forgettable coming-of-age indie with little new to say. Tengan most definitely has talent, so I can only hope that he and Kawakami will pair up again and find a project that allows them both to better display their abilities.

Every Day in Kaimukī had its World Premiere in the NEXT section of of Sundance Film Festival 2022.