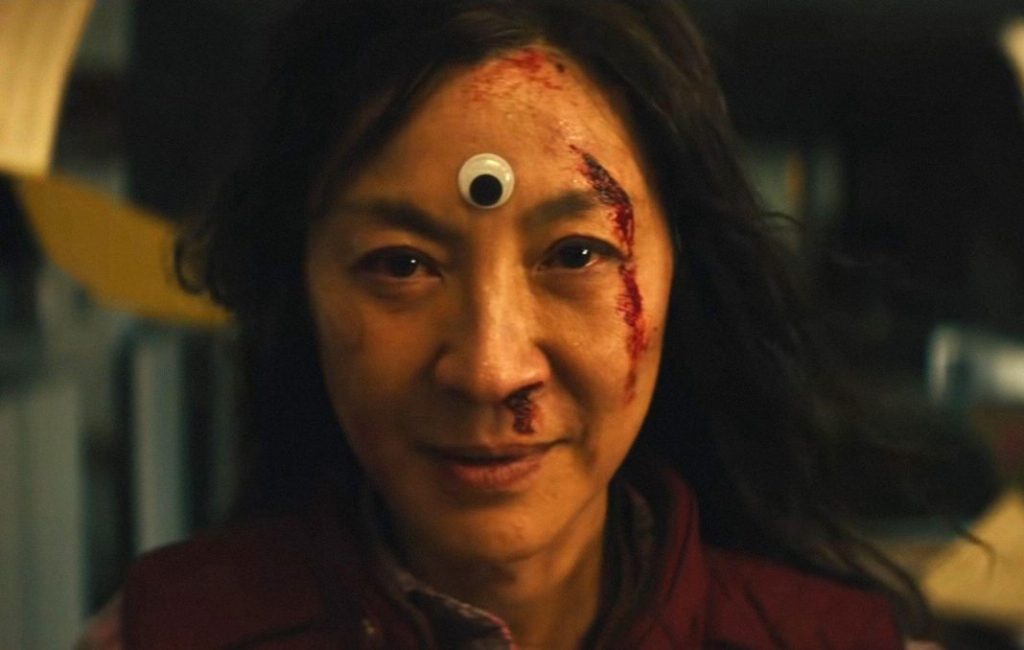 Evelyn Wang (Michelle Yeoh), a flustered immigrant mother, is contacted from a parallel universe and told that only she can save the world. The unlikely hero must learn to channel her newfound powers and fight through the splintering timelines of the multiverse to save her home, her family, and herself in this big-hearted and irreverent adventure. With Stephanie Hsu, Ke Huy Quan, Jenny Slate, Harry Shum Jr., James Hong, and Jamie Lee Curtis.

For in-depth thoughts on Everything Everywhere All At Once, please see my colleague Payton Coelho’s review from its original theatrical release here. 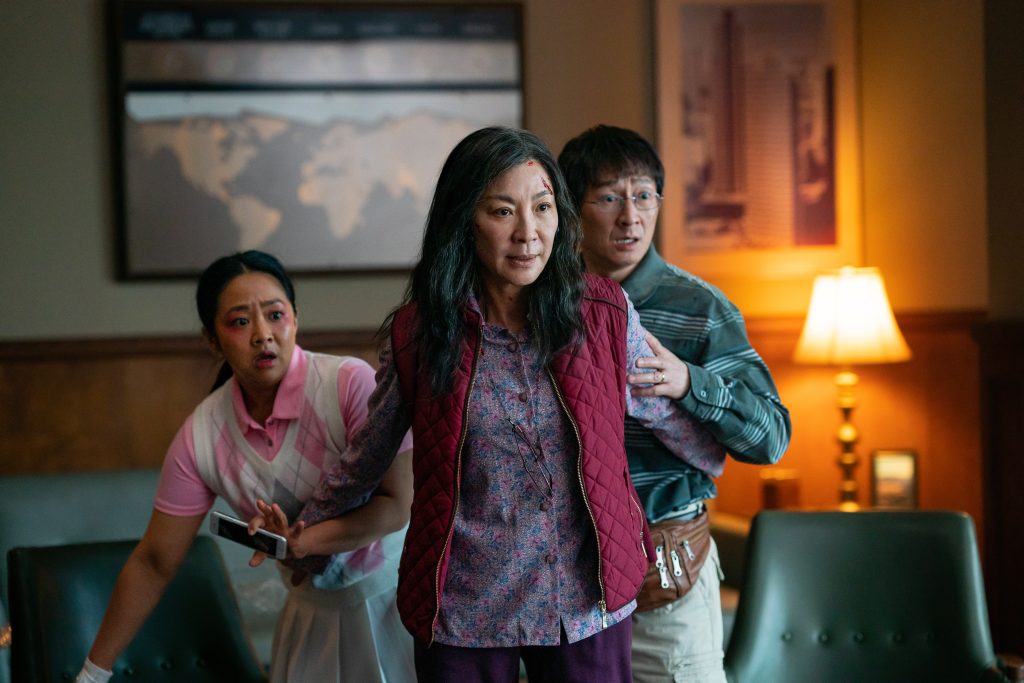 Everything Everywhere All At Once comes to Blu-Ray in its original variety of aspect ratios with a gorgeous transfer that is no slouch even knowing that there is a 4K version on the market. The resulting image is truly spectacular to behold. While certainly not as flawless as the 4K UHD likely is, there is a great amount of depth and clarity to the picture with subtle details coming through clearly. There is some really cool production design featured in the film with the various stylized locations, which you can really appreciate with this transfer. There are a variety of landscapes presented here with each location providing something exciting to explore.

What is important to note is the different stylistic choices in play within the cinematography. Some shots are intentionally soft and glamorous to evoke old Hollywood, while others are razor sharp with dynamic detail. Every location is handled with the precision you would hope from a modern disc. The film employs a distinct color palette for many of the different universes, often dictating how much detail is available to the audience. The ways in which The Daniels find ways to inject pops of color within the costumes and production design never ceases to amaze. Skin tones all look very natural and provide a good amount of facial detail in close ups. Black levels hold up well with very little in the way of black crush or noise. The few very brief instances of compression artifacts and banding are likely cleaned up on the 4K UHD Blu-Ray, so if you are capable you should likely go with that option. 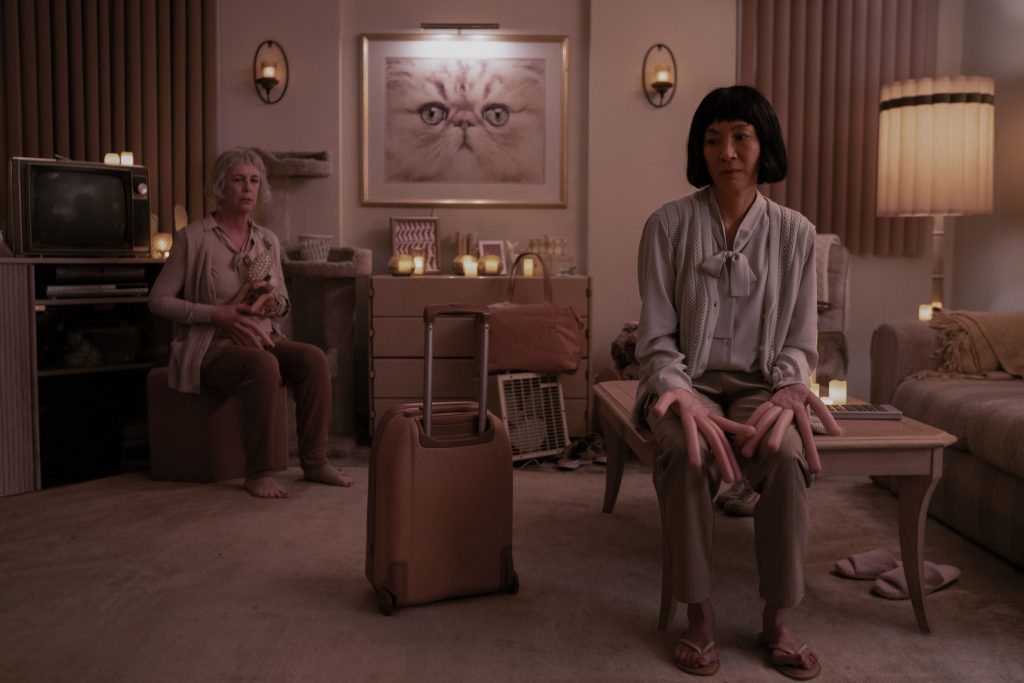 This Blu-Ray comes with a jaw-dropping Dolby Atmos audio mix that is completely enveloping and ready to throw you through the multiverse. This is an incredibly active track that provides all manner of epic sound effects and a terrific score from Son Lux to stir up your emotions. There is a ton of activity in the low end that pulses through you in the most impactful of ways. Dialogue is clear and well balanced when compared with the cavalcade of competing sounds. There is nearly always something going on in the surrounds, but there is never that much difficulty hearing what everyone is saying. The height channels are used to interesting effect in some of the more fantastical sequences. All of the sounds emanate from the appropriate directions, and there are absolutely no technical issues with the track. This one is all encompassing in the best ways. There are optional English SDH, Spanish and Chinese (Traditional) subtitles provided. 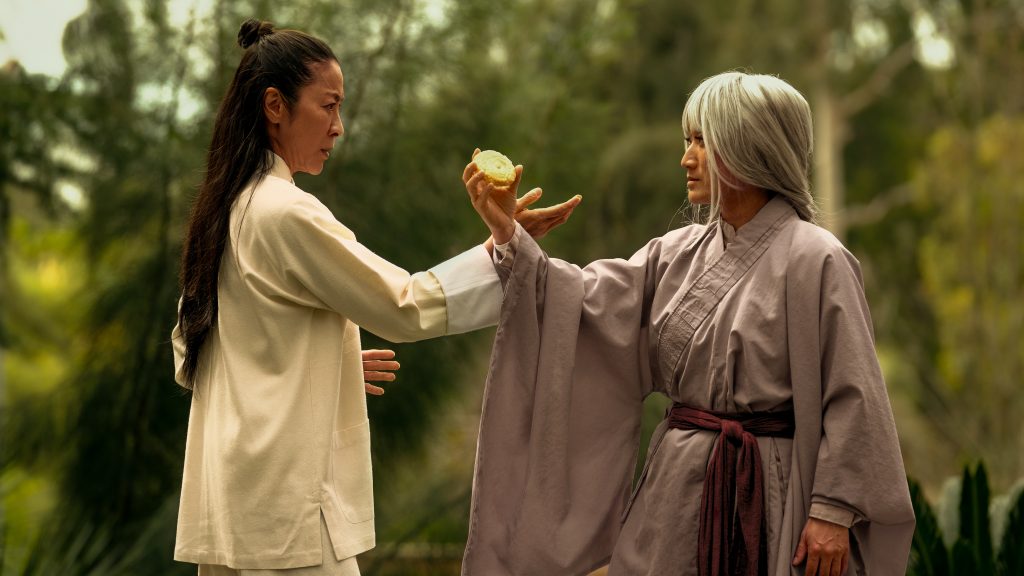 Everything Everywhere All At Once is the type of movie for which we live to experience. This may seem like an exaggeration, but every year we are treated to a seemingly endless lineup of movies that are just slight variations on things that have come before. That is not to say they cannot be elevated by some element of artistry such as the filmmaking or the performances, but there never ceases to be a desire to simply be amazed. The Daniels have crafted a film that amazes in every respect. The mixture of visual excess with thematic resonance allows this film to feel like an out of body experience we do not want to end. Lionsgate Home Entertainment has released a Blu-Ray featuring a very lovely A/V presentation and a spectacular array of special features. In an era where so much is the same, this feature is worth checking out for something a little different. Recommended

Everything Everywhere All At Once is currently available to purchase on 4K UHD Blu-Ray, Blu-Ray, DVD and Digital.

Disclaimer: Lionsgate Home Entertainment has supplied a copy of this disc free of charge for review purposes. All opinions in this review are the honest reactions of the author.