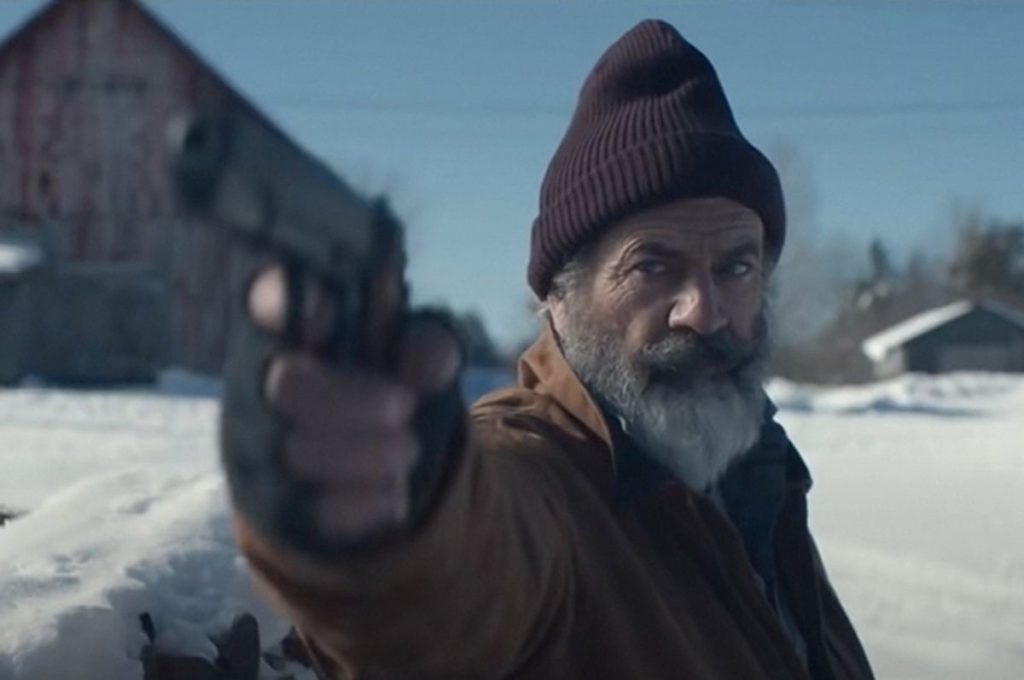 If you feel as if society has been on a steady decline in recent years, you are not alone. In the world of Fatman, this is a phenomenon that has increasingly become more apparent with each passing year. This is especially bad news for ole Chris Cringle (Mel Gibson), who is in the business of distributing presents to all the good little boys and girls. But when you are running out of deserving children to visit, what is a jolly old fat man to do? It is not just that he will miss spreading joy on the best day of the year; Chris is running a business that is subsidized by the government, and he only gets money for the presents distributed – and he is not going to deliver toys to naughty children. Gibson’s Santa Clause is not the kindly old gentleman that is often depicted on screen. This Santa is a disillusioned man with a stark salt-and-pepper beard and a bit of a drinking problem, and his frustration with the world coupled with money problems is making him consider a once unthinkable offer. To keep his enterprise afloat, he is going to have to contract out his workshop and elves to make parts for a new fighter jet for the military. Happy holidays, am I right?

Elsewhere, there is a spoiled brat named Billy Wenan (Chance Hurstfield) who epitomizes everything that is wrong with children today. He comes from a very wealthy family and basically has the run of the mansion as his absentee father jets around with whichever girlfriend happens to be around this week. He barks orders at the hired help like a rageful little dictator while putting forth a cherubic demeanor to those in the world. He is used to getting his way and is very competitive, going as far as to take revenge on a sweet little girl who dared to steal the top prize from him at the science fair. When young Billy feels slighted on Christmas morning when he receives coal instead of the multitude of presents he knows he deserves, he decides to take justice into his own hands: he is going to have Santa killed. His muscle of choice is the quirky, ruthless hitman Jonathan Miller (credited as “Skinny Man”) as portrayed by Walton Goggins. Miller has his own issues with Mr. Kringle after not receiving what he wanted most when he was a child himself. 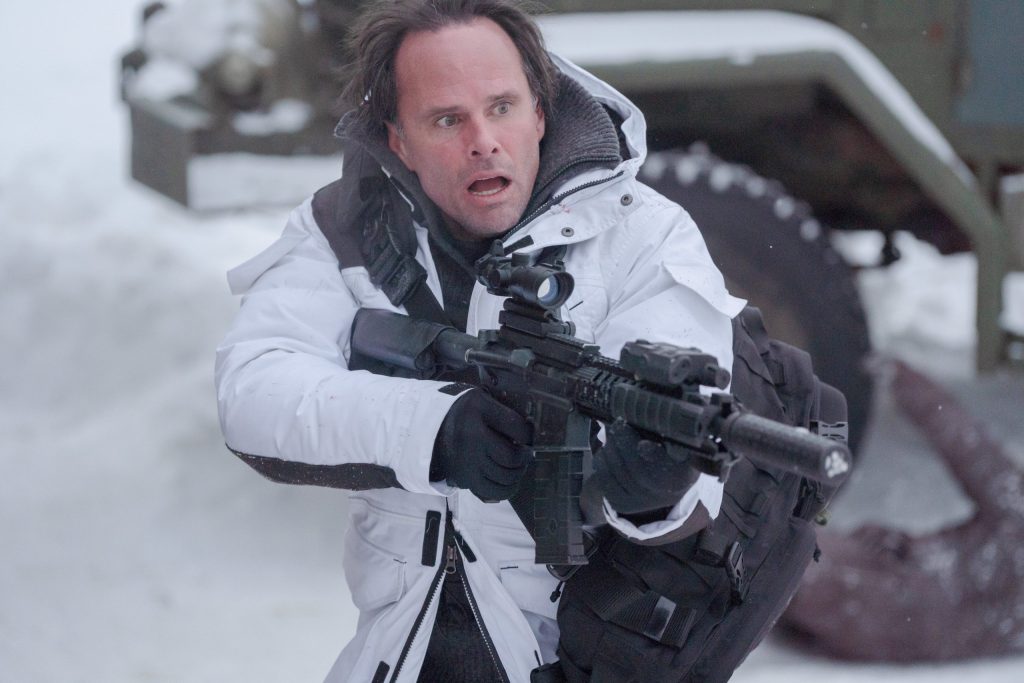 For as pulpy and ridiculous as the premise is, sibling directors Ian and Eshom Nelms (Small Town Crime) treat the subject more seriously than you might imagine. The portions with Gibson are more slow and contemplative as the stakes are established with this grizzled old Saint Nick. The novelty of having someone as problematic as Gibson portray this iconic figure is obvious, but he does a solid job if you can remove your personal feelings for him. He wears his weariness bone-deep, but you can see the twinkle of Santa behind his eyes when he is interacting with the elves, and especially with Mrs. Cringle (Marianne Jean-Baptiste). I do not think it is a stretch to say that this movie would not work as well as it does without the incredible performance of Jean-Baptiste as Ruth. Her character is one that grounds Nick and brings a warmth to him that makes you care about his well-being. If Santa was just a straight up jerk, what difference would it make if he was taken out by an unhappy citizen? Santa’s better-half is often given the short end of the stick when it comes to character development in other projects, but here she is treated as an equal.

While this may seem like an overly-serious affair based just on Nick’s side of the journey, it is Walton Goggins who steals the entire film with his calculating and oddly hilarious villain. If you are a fan of Goggins, you already know that he can play these characters to perfection, and if you are not already a fan, what are you doing with your life? Miller is dogged in his pursuit of hunting down our mythical hero, and the trail of bodies he leaves along the way to the explosive finale is violent fun. The way in which the movie blends the outlandish with a more serious execution really works well. The film could have been tightened up a bit when it comes to the pacing, and a few more violent sequences along the way could have satisfied the more bloodthirsty among us, but overall this a really offbeat and entertaining addition to the line of atypical Christmas movies. If you truly despise Mel Gibson, you will not be missing out on some cinematic masterpiece, but Walton Goggins is such a dynamic presence that he makes the movie. If your holiday celebrations have been lacking in the body count department, Fatman can help you out with that.

Fatman comes to Blu-Ray with an eye-popping 1080p presentation that makes the movie look simply phenomenal. The film is filled with gorgeous cinematography conveying wintery solitude of a deep northern town that is presented with perfect clarity on this disc. From the many brightly lit snowy scenes to the darker, shadowy sequences, the skin tones and facial details are incredibly rendered in an expert manner. Subtle facial features are readily visible, and the minute details of the winter clothing are displayed quite pleasingly. Colors from the blood and clothing pop off the screen alongside the varied winter landscapes. Black levels are deep and never betray the objects on screen with a tack sharp aesthetic. No instances of compression artifacts or other digital anomalies crept up during the viewing. This is an immaculate presentation for a visually engrossing film.

The Blu-Ray disc comes with a DTS-HD Master Audio 5.1 track that handles everything that is thrown at it with ease. The film is primarily dialogue driven, but the ending siege delivers a sonic assault that will give your speakers something substantial with which to work. There is some nice ambient activity in the rear channels, especially during scenes taking place outdoors. The dialogue primarily stays in front center channels and is reproduced clearly. The track does a good job of making sure neither sound effects nor the immersive score ever overpowers any dialogue. The score brings a richness to the story that fills up the room on this track. Miller brings sporadic jolts of action to the story that inject some heft to the low end that is appreciated in a film such as this one. This track has a substantial dynamic range that should please fans. 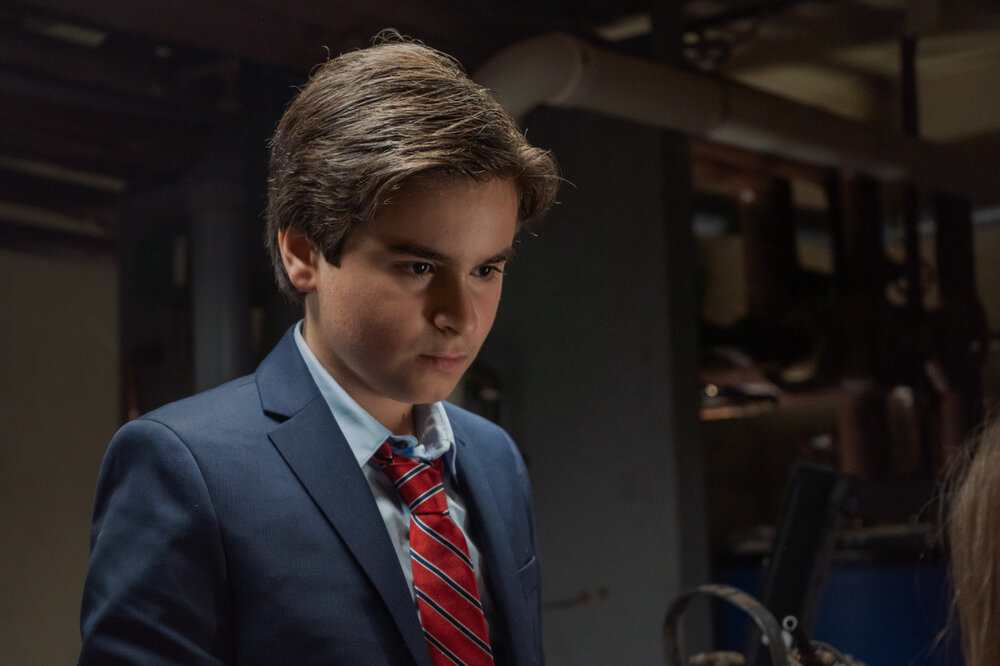 Fatman is a darkly comedic and gleefully violent entry into the pantheon of Christmas films. Mel Gibson does a capable job as the grizzled old Santa Claus, but it is Walton Goggins who steals the show with his hilariously sinister hitman character. Paramount Home Entertainment has provided a Blu-Ray with a stellar A/V presentation and a few compelling supplemental features. This one proves to be a lot of fun and is sure to be one you will want to keep in your Christmas rotation. Recommended

Fatman is currently available to purchase on Blu-Ray, DVD and Digital.