“My plan was to die before the money ran out,” says 60-year-old penniless Manhattan socialite Frances Price (Michelle Pfeiffer), but things didn’t go as planned. Her husband Franklin has been dead for 12 years and with his vast inheritance gone, she cashes in the last of her possessions and resolves to live out her twilight days anonymously in a borrowed apartment in Paris, accompanied by her directionless son Malcolm (Lucas Hedges) and a cat named Small Frank—who may or may not embody the spirit of Frances’s dead husband.

It’s never too late to make amends. Whether it’s something you’ve said or done, didn’t say, or didn’t do, it’s up to you to fix it. Sometimes we accidentally take for granted those that love us and have been around for an abundance of time. When that happens, it creates a gap that gets bigger with every slight and every moment you disregard their feelings or don’t fully let them into yours. When that loved one begins to disappear, and they will, you can fix it as long as you’re willing to take responsibility. Don’t lose someone you love because of your hubris.

“I’m more than odd. There’s a goodly part of me that wants to set this building on fire with myself and my son locked in. What do you think of that?”

Based on a book of the same name, French Exit is delightfully offbeat and wonderfully written. If you are a fan of witty banter and peculiar happenings, you will enjoy this film a great deal. The dialogue and Michelle Pfeiffer’s performance are what won me over. Initially, the story felt like an unrelatable, woe is me pity party for this socialite that lost it all but still wound up with an abundance of money. Eventually, you realize the story has some heart and plenty to latch onto. The film is anchored by Pfeiffer’s portrayal of Frances. She’s confident, has an alluring aura, and completely takes charge of every situation. There’s this subtle glaze of wonderment that cascades down over the film that makes it feel like Clue to me; it’s rather pleasing. At times the story feels as if it kind of nonsensically meanders around like a vagrant poet mumbling beautiful yet random poetry. However, once it turns the corner, the film becomes full of mystery. What’s going to happen next? Who else is going to show up? Where’s Small Frank? Why is the private instigator still here? Those questions and more begin to bubble up as everything gets more interesting. I kept waiting for some big twist or reveal to happen but rather what we get is more human and warranted. We get closure. We get closure for the character that is seemingly drug around the entire film without a say in what happens next. While making the best of their situation, they seem to wander aimlessly while tethered to the person they trust the most but know nothing about. In a roundabout way, the film is about rekindling relationships and appreciating the good that surrounds you before you lose it. With a score that adds to the peculiarness, great awkward chemistry, and some dazzling performances, French Exit is worth a watch or two. It got better the second time I watched it. Its rewatchability is medium.

When Frances learns that her late husband’s money has run dry, she decides to sell everything and live out her last days in Paris with her son, Malcolm and their cat, Small Frank. They’re not only leaving friends but a decadent lifestyle and Malcolm’s fiancée who finds out at the last minute.  While on a ship to their destination Malcolm encounters a medium that catches his eye and something mysterious about Small Frank catches hers. Once in France, they quickly make an unwanted friend in a woman named Mme. Reynard who already knows Frances and her situation. Once they are settled in, Frances plans on going through with her selfish and dramatic idea of money and death. Once an argument with Small Frank turns into scratches and a runaway cat, they have no choice but to contact Madeleine the Medium but first, they must track her down. Once the Madeleine is in their presence, the mystery begins.

The offbeat film moves at a melodic pace.

Michelle Pfeiffer delivers a maniacally charming performance as Frances. You can never quite tell if she likes you or she wants to stab you. She has a voice, cadence, and vocabulary that’s hard not to latch onto. Lucas Hedges also deserves some praise for his portrayal of Malcolm. He seems to have nothing but awkward encounters and no direction in life. The mother-son chemistry they have with one another is more partner in crime and it’s one of the best aspects of the film. The crowning achievement of awkwardness goes to Mme. Reynard (Valerie Mahaffey). Her interactions are hilarious and wait until you see what’s in her freezer. 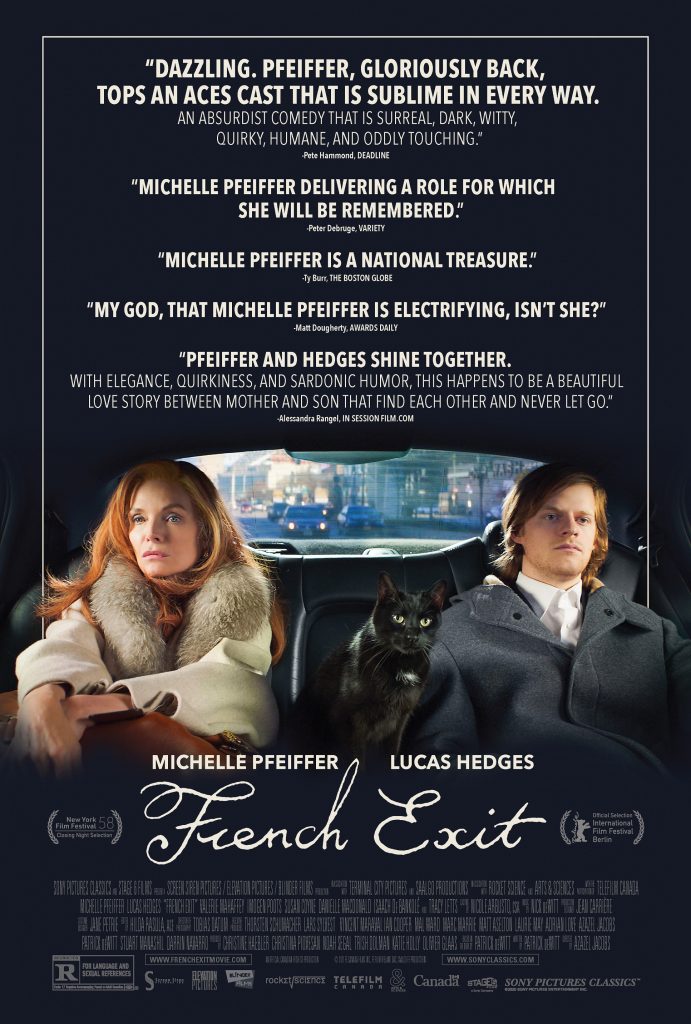