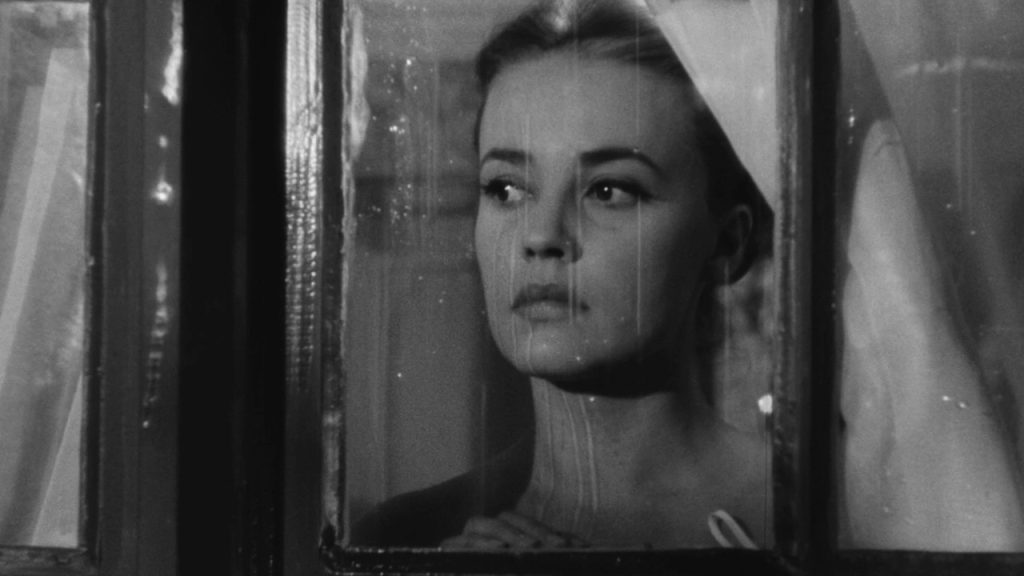 This collection features three film noir classics from France. SPEAKING OF MURDER (1957) a.k.a. LE ROUGE EST MIS – From acclaimed crime writer Auguste Le Breton (Rififi, Bob Le Flambeur) comes this gripping noir thriller starring cinema icon Jean Gabin (Rififi in Paris, The Sicilian Clan). Louis Bertain (Gabin) is the owner of a Paris garage which serves as a front for a gang of thieves. He and his accomplices are careful to keep up a civic veneer by day, indulging in criminal activities only when “the red light is on” at night. This status quo is upset when one of the gang members becomes convinced that Louis’ younger brother is a police informer. Featuring taut direction from Gilles Grangier (The Night Affair) and excellent supporting turns by Paul Frankeur (Touchez Pas Au Grisbi), Marcel Bozzuffi (Illustrious Corpses), Lino Ventura (The Valachi Papers) and Annie Girardot (Maigret Sets a Trap).

BACK TO THE WALL (1958) a.k.a. LE DOS AU MUR – Screen legend Jeanne Moreau (Elevator to the Gallows, Seven Days… Seven Nights) stars in this twisty, mood-drenched film noir from acclaimed crime writer Frédéric Dard (Rendezvous). When wealthy industrialist Jacques Decrey (Gérard Oury, Sea Devils) discovers that his wife (Moreau) is having an affair with a young actor, he decides to exact revenge by blackmailing her under an assumed identity. In the film’s bravura introductory sequence, we witness Jacques meticulously disposing of a corpse—just a taste of the pitch-black intrigue to follow in director Édouard Molinaro’s (Witness in the City) stylish tour de force, featuring dazzling black-and-white cinematography. Co-starring Philippe Nicaud (The Mysterious Island) and Claire Maurier (The 400 Blows).

WITNESS IN THE CITY (1959) a.k.a. UN TÉMOIN DANS LA VILLE – Based on a novel by the legendary Thomas Narcejac (Diabolique, Vertigo, Eyes Without a Face), this dark tale of vengeance stars the great Lino Ventura (Razzia Sur La Chnouf, A Pain in the Ass) in an early leading role. Industrialist Pierre Verdier kills his mistress Jeanne Ancelin by throwing her off a train. Her husband (Ventura) decides to take revenge on his wife’s murderer, who has been acquitted by justice. Directed by Édouard Molinaro (Back to the Wall) and shot by Henri Decaë (Diabolically Yours), Witness in the City is a pulse-pounding film noir set on the grim and gritty streets of Paris. Co-starring Fellini favorites Sandra Milo (8½) and Franco Fabrizi (I Vitelloni), with Jacques Berthier (Shoot First… Ask Questions Later), Daniel Ceccaldi (Rififi in Paris) and Françoise Brion (L’Immortelle). All three films were restored in 2K.

For thoughts on French Noir Collection, please check out our discussion on The Video Attic:

Speaking Of Murder, Back To The Wall and Witness In The City come to Blu-Ray with the first film given its own disc and the latter two sharing a disc. These films share many of the same qualities, so I will mostly be judging them as a group while pointing out noticeable differences when necessary. All three films have been given new 2K restorations which bring these international gems to our shores in striking quality. The quality stays in the “really good” range with the occasional variance in either direction. Every film retains some amount of underlying print damage and other source anomalies, but nothing ever truly ruins the experience

The gorgeous black-and-white photography holds up favorably across these films as they are given a chance to shine in high definition with natural grain intact. There is a lovely amount of detail present throughout with distinct textures in the environments and within the clothing and production design. The contrast is stable with only a minor level of density fluctuation in the print. Black levels are admirable even if they could be a bit deeper. At least there are no substantial occurrences of black crush or compression artifacts amongst any of these three. The grain field can run a bit inconsistent, but it does remain intact and is thankfully not managed or scrubbed of its texture. Even when the grain gets a bit heavy, it never truly appears clumpy or unnatural. Print damage has been alleviated substantially even if you cannot quite overlook all of it. Underlying faint lines and small specks often accompany softer shots. While there are certain limitations, Kino Classics should be pleased with what they did with this one.

The Blu-Ray set comes with a solid DTS-HD 2.0 Master Audio track for each of these three films in their original French with optional English subtitles. Dialogue comes through crisp and clear without sounding muffled or overwhelmed. It is balanced admirably with the environmental elements so information never gets lost in the mix. The is a very light occurrence of hissing, humming and crackles at random intervals that likely date back to the source elements. The three scores that accompany these films refrain from overpowering the dialogue and other important information. There is not much in the way of overt damage to the audio. Kino Classics has translated these audio experiences with nuance. 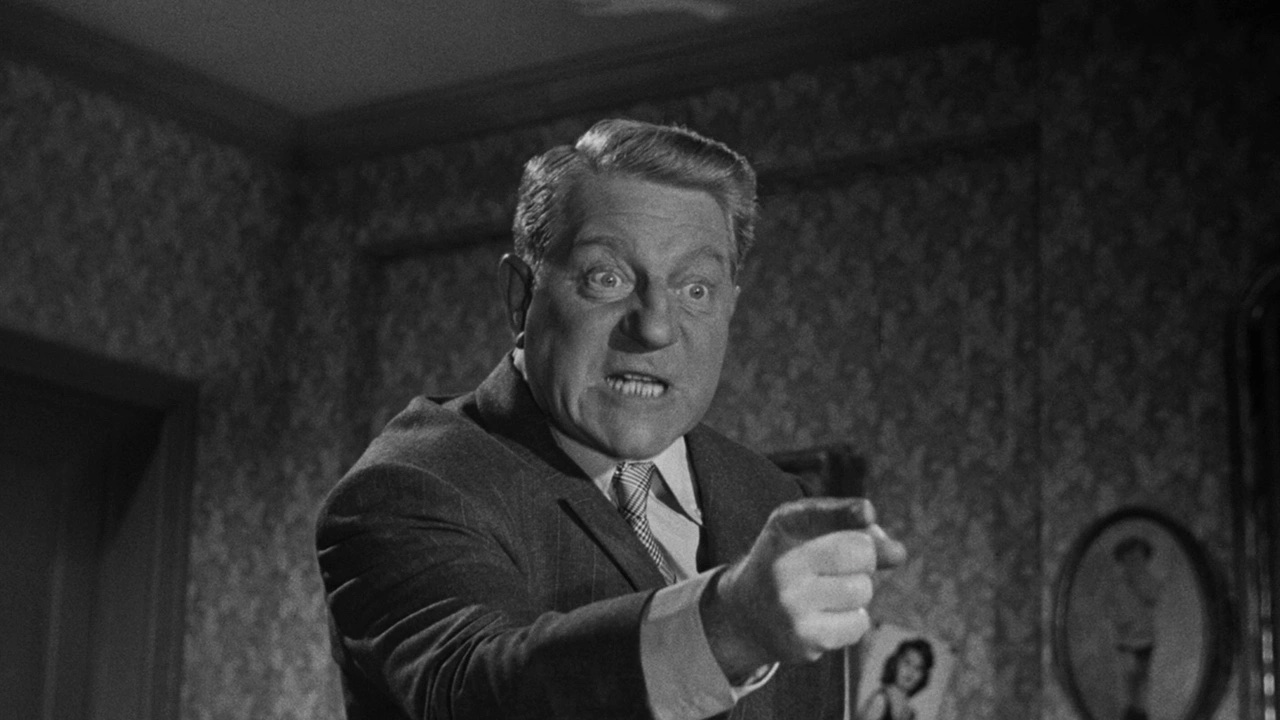 The French Noir Collection continues the great work put forth in The Dark Side Of Cinema series, but this time out you are invited to an international perspective. As with their American counterparts, the selection that comprises this release has some highlights and lowlights, but nothing that stands out as egregious. Back To The Wall is a deliciously nasty little twisty narrative which rewards all the more the deeper you get into it. The remaining two are perfectly solid, but do not stand quite as high as this aforementioned tale. Kino Classics has released a Blu-Ray set featuring a strong A/V presentation and next to nothing in the realm of special features. If you are a film noir fan and want to expand beyond domestic boundaries, this set should be very rewarding. Recommended

French Noir Collection [Speaking Of Murder/Back To The Wall/Witness In The City] is currently available to purchase on Blu-Ray.