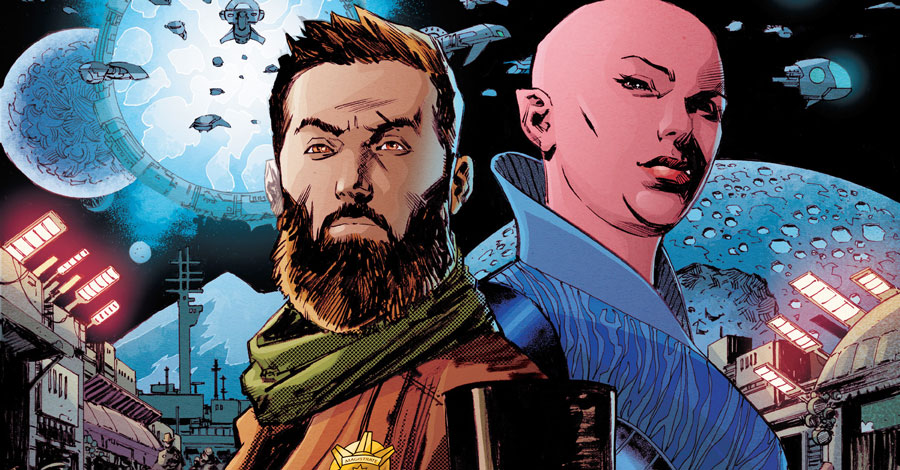 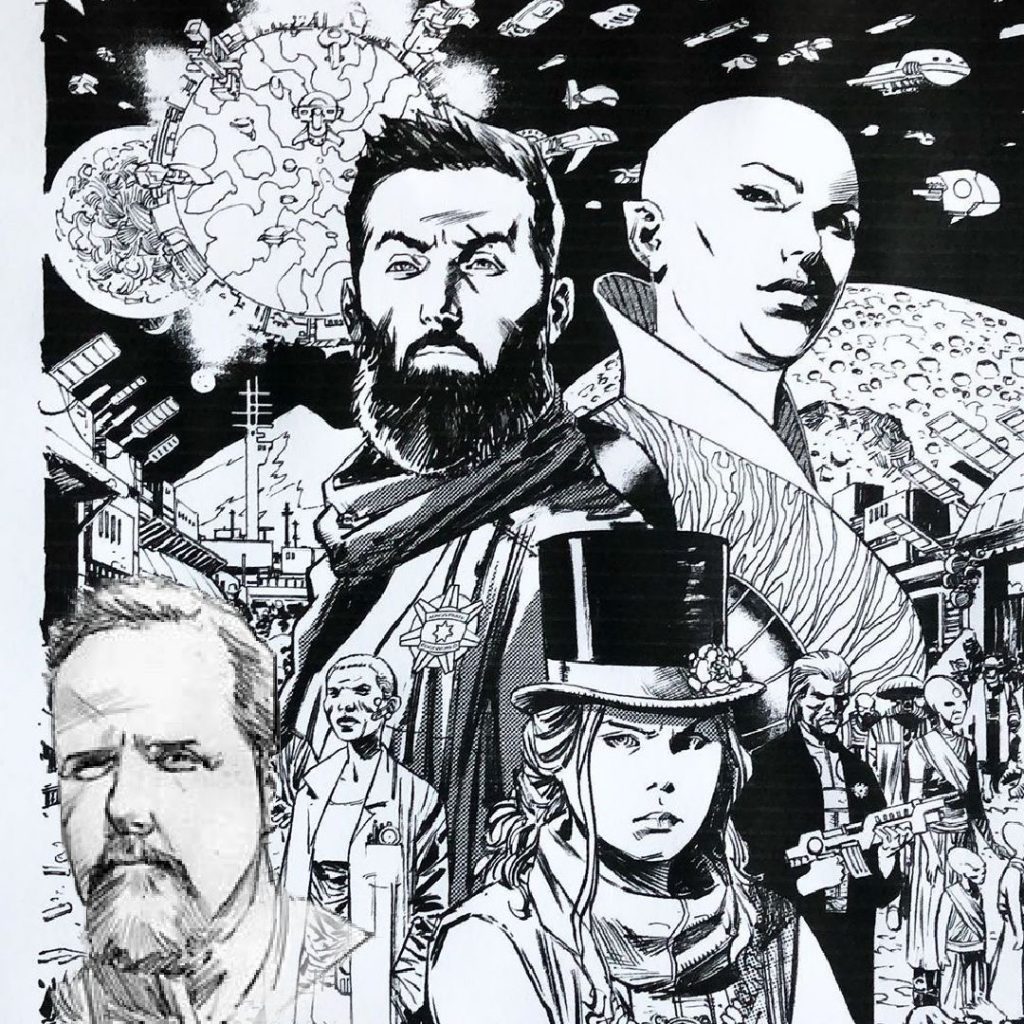 Recently, Pat has teamed with his good friend Chuck Austen for a new series for ComiXology Originals called EdgeWorld. It is a cool mix of western and science fiction that hits some of the best notes of both. We welcome Artist Patrick Olliffe to Geek Vibes Interview. Thank you for your time, Patrick.

PO: My pleasure, looking forward to it!

GVL: So let’s start where logic suggests, the beginning. When did you first take an interest in art and was comic art your first interest?

PO: I think I always had in interest in art/drawing, I don’t necessarily remember a first “aha!” moment when I was a kid. My first influence was definitely comic books and to a lesser extent cartoons. I still have drawings of the Sub Mariner I did when I was around 6 or 7.

GVL: Who were your early influences? Whose work made young Patrick envision himself doing such things?

PO: Neal Adams was the guy for me. I had been reading comics before I first saw his work but I still remember the moment I saw it for the first time, Avengers # 93, I couldn’t believe it, so amazing, my head exploded. That was it. The other big influence was John Buscema, love his work. There have been many influences after that but those 2 were the biggest early on,

GVL: That is amazing for two reasons. Number one, you chose two of Chuck Austen’s favorite artists in Adams and Buscema. Number two, they are favorites of mine. Especially John Buscema. I knew I liked you guys for a reason. Great taste in Comic Art. So was there anyone who gave you encouragement that drawing could be your life’s work? A mentor or perhaps teacher who supported your ambitions?

PO: My parents were always encouraging but it was my dad who first said, “Ya know, people do this for a living!”. He had an interest in art, drew when he was a kid, was always very supportive of my making this a career.

GVL: What was your first big break in the comic business and how did that come about?

PO: Well, I guess there were 2 “breaks”, the first was when I was in my last quarter at art school and I had been sending out submissions to Marvel, DC, etc., getting rejection letters. But the folks at Malibu Comics liked my work enough to offer me the penciling job on a new series called Stealth Force, my first regular work in comics. My “big” break came later when I had shown my work to Ron Frenz who liked it, sent it to his Editor (Ron was drawing Thor at the time) which led to my getting to draw the Tales of Asgard back up features in Thor, even got to do a couple fill ins on the book. That was my first work for Marvel. The Tales of Asgard stories then led to my getting hired to draw Nomad, my first regular series at Marvel.

GVL: You have worked for both DC and Marvel. Is there any appreciable difference and what lessons did you learn from working with the “big two?”

PO: Any differences between Marvel/DC were minor and more based on the Editor I was working with as opposed to a company policy, that was my experience anyway. The lessons I learned had more to do with trying to become a professional in this business, telling a clear story, meeting deadlines, that kind of thing.

GVL: When did you first meet Chuck?

PO: Chuck and I worked together yeeeears ago on a book for Marvel titled “The Call.“ It was a short-lived series but we had fun doing it and wanted to work together more often. Unfortunately, we were never able to line up anything through Marvel so over the years we kept in touch and kept pitching different projects to different companies. Fortunately for us, comiXology said yes to Edgeworld!!

GVL: So was getting to work with Chuck the main incentive for signing on to EdgeWorld and how did he present the idea for the story?

PO: Yep, as I mentioned previously, we had been searching/pitching ideas for a project to work together again on. He mentioned the sci fi western idea to me after a previous pitch idea didn’t go anywhere, it sounded great so we started bouncing ideas back and forth, he started writing scripts, I started designing characters. It didn’t have a home yet but we both were having a great time developing it.

GVL: As an artist himself, did Chuck give you any guidelines what forms the characters would take or did he leave it in your talented hands?

GVL: You are working with colorist Lee Loughridge. How was that collaboration? Had you worked with Lee previously?

PO: It’s been great, Lee’s awesome! I never worked with Lee before, very happy to have him on the project. He’s been able to perfectly capture the look/feel that we had in mind for the book.

GVL: If EdgeWorld proves to be positively accepted (as I believe it will), would you be onboard to do more stories if the opportunity presented itself?

PO: Absolutely!! My hope is that you’re right, the book is positively accepted and Edgeworld has a nice long run!!

GVL: Chuck said the same thing. In fact he has already made plans for future stories and even spin -offs. He’s all set to go. Now we just need the fans to cooperate. So, besides your work on EdgeWorld, do you have any other projects coming up that you are free to talk about?

PO: Edgeworld is what I’m focused on right now. Penciling and inking this project is pretty labor intensive so there’s little time for anything else.

GVL: We really appreciate you giving some of your time today. Finally, I leave you with a mandatory hypothetical question. Mandatory because it’s how I end most interviews…I’m too old not to be consistent. So here’s yours:

Your collaboration with Chuck has opened eyes in the comic world. You and Chuck have been chosen to do a limited series crossover between EdgeWorld and any character or characters you have worked on in the past. Which characters do you think would fit best with those in your new series? Who would Killian Jess work best with?

PO: Wow, that’s a great question! Hmmm, well, I’ve been very fortunate to work on a lot of different characters over my career, my choice would be Spider-man. I think he has the intelligence/science background to help Killian on cases, his powers would be an asset in any situation they would find themselves in and I think his youthful/joking personality would be a great counter point to Killian. That combination would lead to some really fun back and forth dialogue!!

GVL: Well that would be all kinds of cool. Thanks again, Patrick and we at Geek Vibes Nation will be following EdgeWorld with keen interest.

PO: Thanks so much for giving me an opportunity to talk about Edgeworld! Thanks as well for your kind words about the project!!

Issue number two of EdgeWorld comes out October 20th. So you have until then to read Issue One. You won’t regret it, especially if you are into the mix of western and sci-fi, EdgeWorld is for you. Stay tuned for further reviews here at GeekVibesNation.