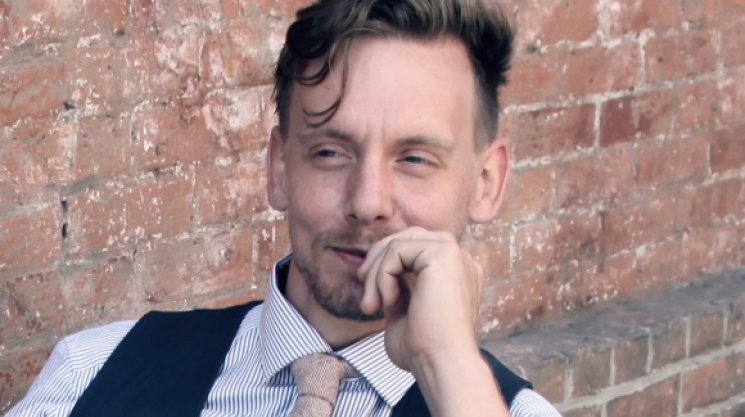 For a relatively young man, Peter Ricq has accomplished a great deal. He started out in 2005, as co-creator of their first animated show “The League of Super Evil” (LOSE). From there he worked on additional animated features. But he was just getting started. He also performs with his band Humans along with his partner Robbie Slade. He has released a graphic novel entitled Once Our Land and it’s sequel Once Our Land 2.

Apparently, he had an extra few minutes so now he has written and illustrated a children’s book: Ghosts are People Too. Recently he started a KickStarter for the new book. With all that in mind, we are proud to welcome Peter Ricq to Geek Vibes Interview. Thanks for giving a few moments, Peter. 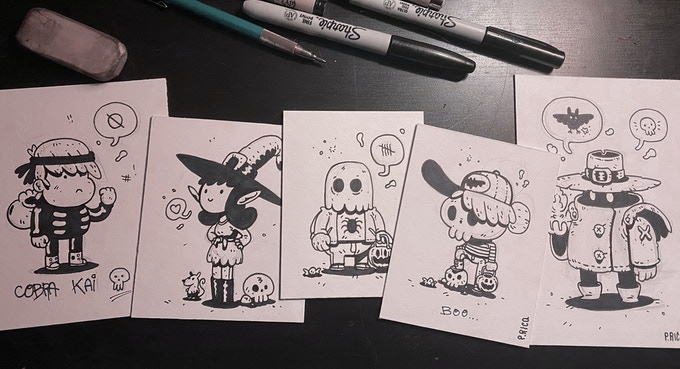 GVL: As I mentioned in my opener, you have been involved in a wide variety of creative endeavors. From Visual Artist, Television Producer, Writer, Art Director, to Performer. What made you decide to put out a children’s book?

GVL: (Laughs) I am a 50+ year old writer on a “fan” website mainly writing about comic books. I have proudly NEVER grown up. So when I first glimpsed your title, “Ghost are People too” My initial reaction was that it sounds like a book Lydia might have written about the Maitland’s in Beetlejuice. But one that DOESN’T read like Stereo instructions. What was your inspiration for your story?

PR: That’s funny, it kinda does feel like that doesn’t it. I love that movie so much, it’s aged so well too. The inspiration came when walking in a bookstore and seeing The Gashlycrumb Tinies on the shelf again in years, I thought to myself “Why aren’t there more books like this? I could probably do one and help the cause.” I thought about it for a while, I wanted to do something spooky, with heart, a good message, and not be too safe for kids yet very fun. I lived life a bit with this idea in the back of my head and I can’t remember how but it just popped right in there one day.

GVL: The pages I have seen to this point are whimsical and so well done. Were these characters you had created specifically for your book or did they have their genesis from earlier sketches?

PR: Oh! Thank you so much. Once the idea was there, I was inspired by Tim Burton’s work and the old Universal Monster movies and his sister is basically the creepy ghost girl from The Ring. The style was inspired by Les Chefs d’Oeuvre de Lepouvante and Edward Gorey. So the inspiration came from a lifetime love of all horror and the execution was quick since it came from the heart. 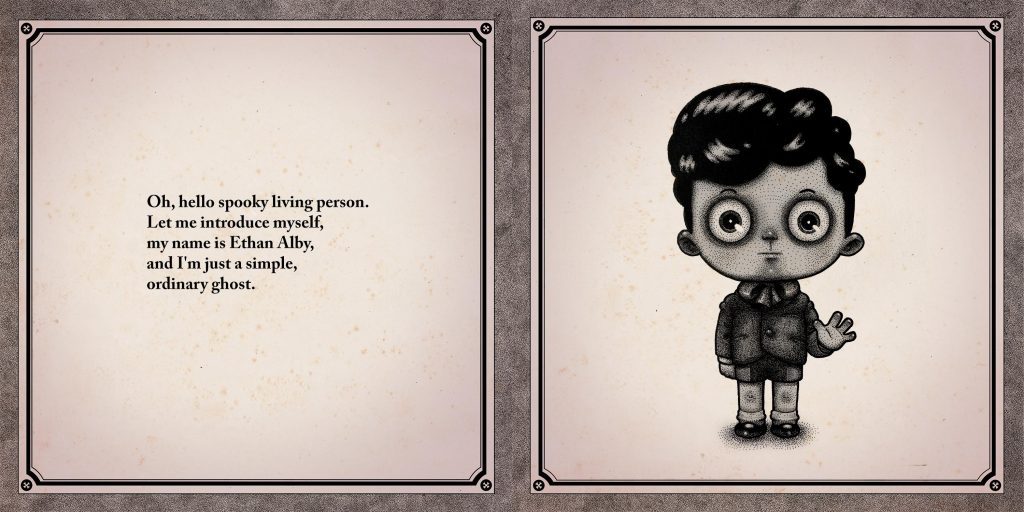 GVL: It really shows. I  love that Ethan refers to the living as spooky. Generally speaking, most people would never even consider what a ghost’s perception might be. Especially a young ghost. In most literature, the living are usually more self-centered about their own fears. I find this a creative approach. Was that intentional originally or did it develop during your writing?

PR: Well… I can’t remember where it came from but it might have been from the book I Am Legend by Will Smith… no wait,  author Richard Matheson. In his book “Will Smith” or “Vincent Price” depending on which film you are referring to, the vampires are afraid of the last human alive because he goes out to hunt/kill the vampires that populate the earth during the daytime. The vampires call the vampire hunter “The boogie man” and he is the monster. I thought that was so clever and very meaningful, it can open up one’s eye. So it might have come from that.

GVL: You have launched a Kickstarter for your book. While as a producer you are most likely used to promoting your work to get backing, how has this endeavor been thus far? Has it been different than you imagined?

PR: It’s very early still and I always try new things and hope for the best. I have fun with my videos and I think people enjoy them too. I think this is my best video yet!

GVL: I do love the trailer for the book. For you to say it is your best that’s probably saying something. So, If your book does well, and I already know some people who are very enthusiastic about the project, can you foresee another follow up book?

PR: Yeah! And thank you! I’d love to expand on Ethan’s story and introduce more characters. I also want to write a feature that would be a mix of Beetlejuice and Jojo Rabbit. 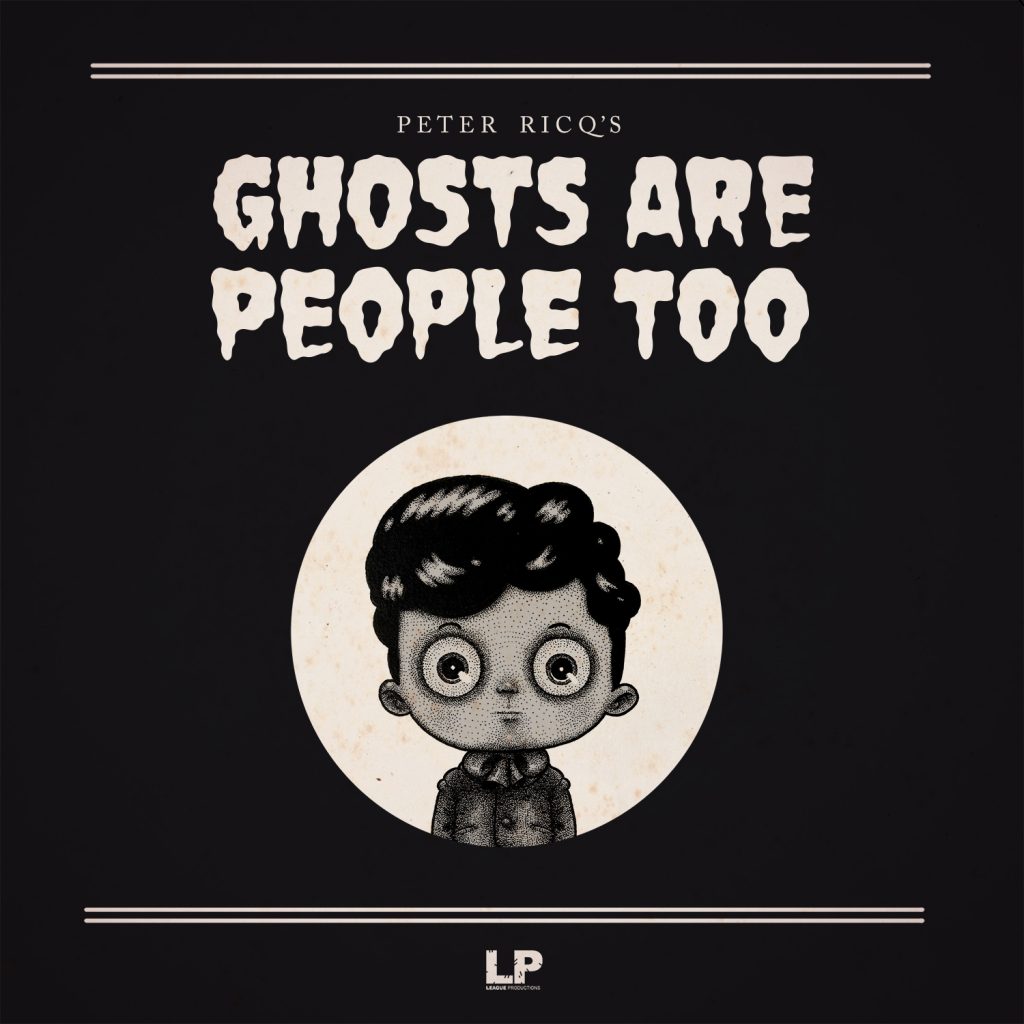 GVL: Thank you so much for your time, I have one last hypothetical question for you. Ghosts are People Too is a huge hit. There has been talk of adapting it either to an animated film or a live action version. If this were acceptable to you, which format do you believe it would be better suited for?

PR: Haha, I always just saw this idea one way, I would prefer it being live action, I think it would be a little spookier that way, just the way I like my movies. Although, after seeing the huge backlash from the fans on Sonic The hedgehog (their original design was atrocious) you never know, maybe we’ll have to do it animated.

Thank you for your time, Peter. We look forward to reading your book when it is released and the other projects you have going in the future. If you want to check out Peter’s KickStarter, you can find it here. 🖖🏻