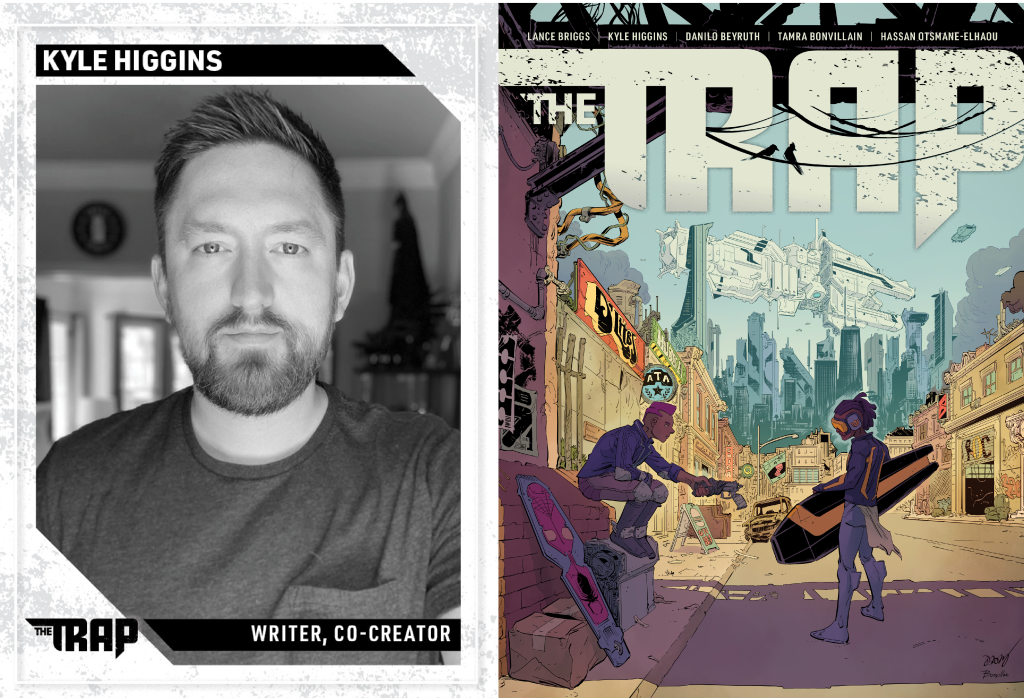 Kyle Higgins has been writing great comics for some time now. He has worked for both Marvel and DC with some of his most noted work being about the Batman family of characters. This includes work on Batman: Gates of a Gotham (along side co-writer Scott Snyder), and Nightwing. He also wrote Batman Beyond 2.0, as well joining the Batman Eternal team. These days, Kyle is hard at work on his Rise of UltraMan series. But if that’s not enough, he has also teamed with former All Pro Linebacker Lance Briggs and artist Danilo Beyruth on a new graphic novel called The Trap. With this new project in mind, we welcome Kyle Higgins to Geek Vibes Interview. Thank you for a few moments of your time Kyle.

GVL: You have been involved with comics and film making at an early age. What was it that inspired you at that time to take an interest in not only comics but film?

KH: You know what’s kind of fun, it was actually superheroes that sparked my love of comics and film. I was so obsessed with Donner’s Superman and Burton’s Batman, Teenage Mutant Ninja Turtles, plus some of the really great animated series of the era — Turtles, Batman, X-MEN, Spider-Man a few years later — that I wanted to a) find more of that caped content and b) start making movies of my own. Then, when I was in college thinking about what I wanted to do for my senior thesis film, I decided to go back to the material that had inspired me to start making movies in the first place — superheroes.

GVL: So with that in mind, which comics, writers or artists were your favorites in your early years? Did you have a favorite character, artist, or writer that you admired or wanted to emulate?

KH: Well, Nightwing is my all time favorite character. Hands down. And the creators who really defined him for me, when I was eleven or twelve, were Chuck Dixon and Scott McDaniel. So, I was a big fan of both of them — still am. But before that series, I wasn’t really “aware” of specific creators in the same way I really came to be aware of them — picking favorites, following writers and artists I liked onto whatever their new books were — in my teenage years. That said, there were a few exceptions — there were these really amazing novels that I started reading, when I was ten years old. Spider-Man The Venom Factor, by Diane Duane, Batman Knightfall by Denny O’Neil and Daredevil Predator’s Smile by Christopher Golden. I loved the books so much that I started following the authors, waiting for the next Chris Golden superhero novel, etc.

And then, I got really into the Ultimate comics when I was a freshman in high school. Bendis, Bagley, Millar, Kubert. That era is when I started really paying attention to comics creative teams and following them.

On the character front, outside of Nightwing and the Bat family, I was primarily a Marvel guy — Spider-Man, Daredevil, the X-MEN.

GVL: At that time, did you have someone who encouraged you or took an interest in your writing or film making ambitions?

KH: My parents, first and foremost. And my next door neighbor, Nick, as well as my sister, Katy, and our neighbor behind us, Cara, were all a few years younger than me. But definitely worked on and starred in all of my early filmmaking endeavors. It was so exciting to all of us.

I remember the morning I realized, “wait, Dad has a video camera… does that mean we can make our own Ninja Turtles movies?! As the Ninja Turtles?!” It was a pretty revelatory experience. My dad showed me what a “cut” was as well as how to do title scrolls (by tilting the camera down a piece of paper with names written on it).

GVL: You were involved in many titles that were connected to the Batman family of characters. What was it about Batman and his world that fascinated you?

KH: I’m just a huge fan of Gotham, going back to the Burton film, the Adam West reruns, the comics of the 1990s and — most importantly — Batman the Animated Series. I will pretty much never turn down a Batman project.

GVL: Now that I think of it, I saw you along with Neal Adams, Tim Seely, and a few others at a “80 years of Batman“ panel at the Raleigh GalaxyCon. Back in the good ole days of 2019. Currently however, along with your work on Ultraman, you have teamed up with former football great Lance Briggs and artist Danilo Beyruth on a graphic novel entitled The Trap. How did this partnership come about and how has it been working with Lance?

KH: Lance and I have known each other for years now, originally connecting because of our shared love of comics, superheroes and the Chicago Bears. It took a little while to figure out something to collaborate on, but about a year and a half ago we started meeting regularly to talk about ideas, which has turned into The Trap. Lance has been great — he’s super collaborative and energetic, not afraid of the grind that is writing and world building, and always has new ideas.

GVL: Had you worked with Danilo before and what is the dynamic you use? Do you supply him with a full script or just basic outlines? Which alternative usually works best for you? 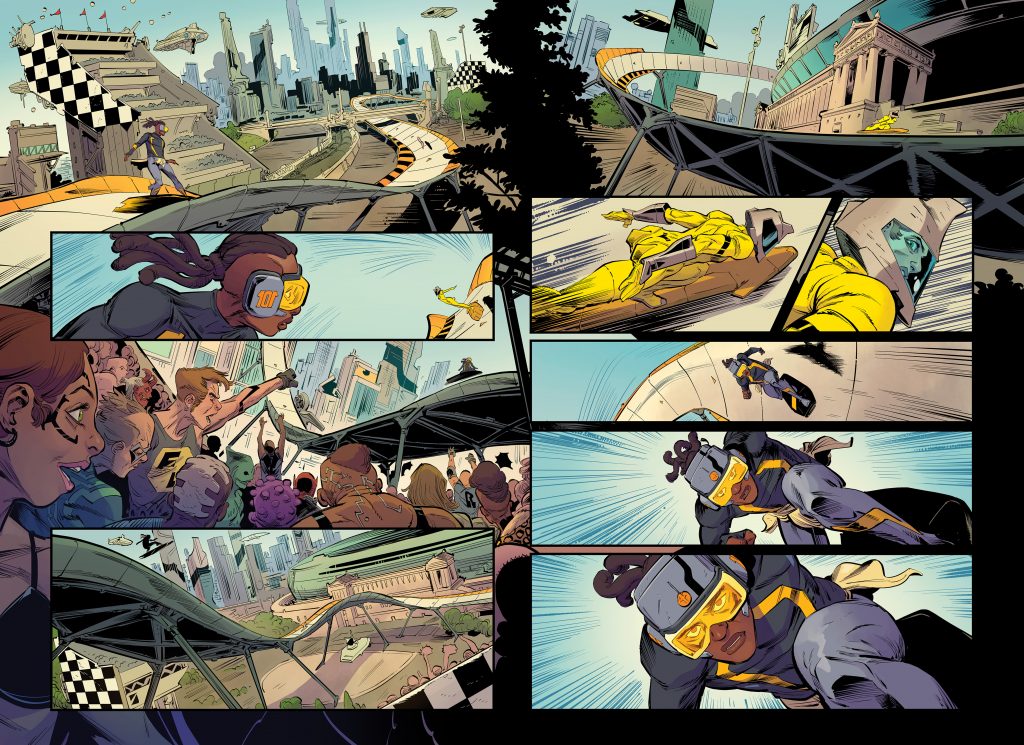 KH: I haven’t! This is our first time working together. I tend to write full scripts — never basic outlines — but sometimes more “plot” style, or some sort of hybrid. It depends on the artist, their storytelling preferences and which way we think will help them to create the most dynamic art. With Danilo, he’s such a fantastic writer and storyteller in his own right, we’re working in a hybrid style.

GVL: When there are co-creators on a project, how much discussion is entailed in the basic storyline? Does it generally require a consensus or is it more a matter of each team member contributing what they do best?

KH: It depends. Ultimately, it’s going to be the writers’ call on scripting but we always listen to feedback and try to cater for what an artist wants to draw and the way they want to tell the story. On the co-writing front though, Lance and I go through everything together. It’s usually a discussion, but we’re very honest if either of us don’t like something. So far, I’ve done the scripting, with Lance then making changes in our google doc, adjusting dialogue, writing new elements, etc.

GVL: As a follow-up, you have been juggling different projects for a number of years now. Do projects with multiple creators make that job easier or more challenging?

KH: Well, every project has multiple creators. But do you mean, multiple writers?

GVL: My bad, yes…I meant multiple writers. Thanks for clarifying.

GVL: My goodness, that’s a lot. Makes you wonder how you have time for anything else. And speaking of something else, a Kickstarter was recently started for your new book. Have you been involved in KickStarters before and what has been experience with the process? I have mostly seen great successes with it.

KH: I’ve backed a handful of Kickstarters over the years, but this is my first time launching one. It’s been an equal parts exciting and stressful experience (laughs). The campaign is so much work, even more than people had warned me it would be. But, we’re just about halfway to our goal with a long campaign left, so I’m trying to stay optimistic.

GVL: I asked Lance this so it only follows that I ask you as well. If The Trap is well received, are there other stories to be told in this universe and would you be agreeable to doing another book?

KH: Sure, absolutely. There are a ton of stories in this universe left to tell.

GVL: So with everything you’ve got currently going, and not that you need MORE to do, but do you have any other projects upcoming that you are free to talk about?

KH: I’ll have a pretty cool announcement next month!

GVL: Well that’s a teaser to be sure. Perhaps we will follow back up with you after your announcement.  We thank you so much for your time today. We will close this with a hypothetical question. Which would be more satisfying to you as a creator: Making a film that wins an Emmy or perhaps even an Academy Award for best short film, or winning an Eisner Award for a book that you wrote, (or co-wrote, as the case may be)?

KH: You had me until you qualified it with “short film” (laughs). You know, any of those would be really high class problems to have. It would be pretty neat, for sure, but all I can do is keep telling stories and trying to get better at my craft, and that process has to be where the satisfaction comes from. Otherwise, you’re chasing the wrong goal. We’ll see what the future holds.

GVL: Thanks for talking to us Kyle and we wish you, Lance and Danilo great success for The Trap. We at Geek Vibes Nation will be following this project with great anticipation.

KH: My pleasure! Thanks so much for taking the time!

The Trap is still in its Kickstarter if you want to check it out and perhaps support it. And stay tuned for our interview with the other member of The Trap’s writing team, Lance Briggs. Coming soon to GeekVibesNation.