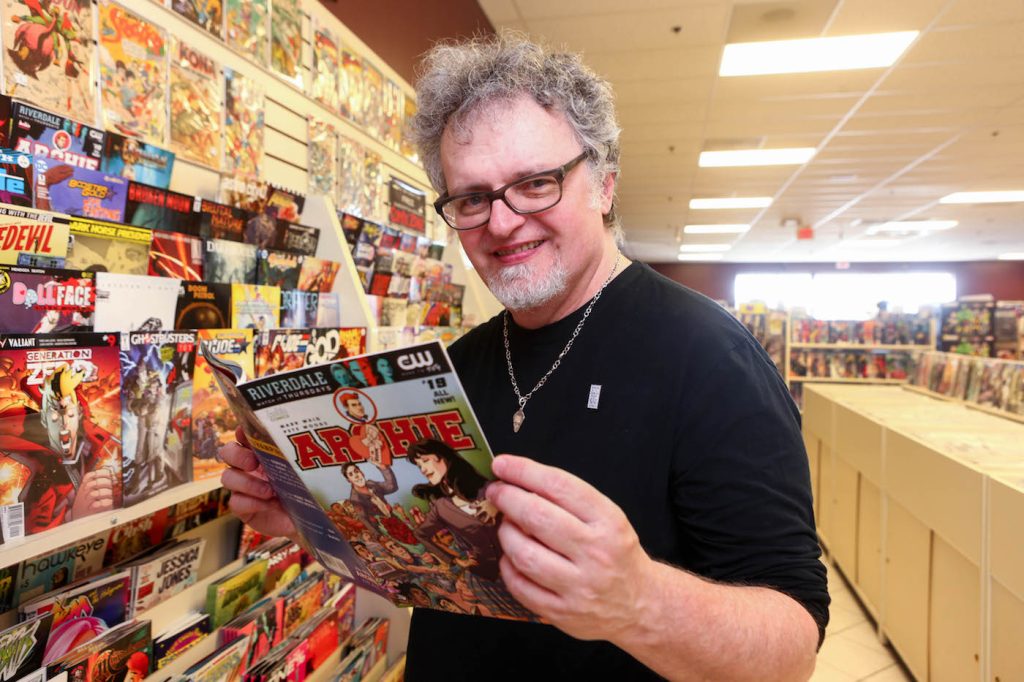 We at Geek Vibes Nation are very honored to have a chance to talk with comic book writer and editor Tom Peyer. Tom has worked for both DC and Marvel as a writer and as an editor. Presently, Tom is editor-in-chief of AHOY Comics, where he writes The Wrong Earth, its prequel, Dragonfly & Dragonflyman, High Heaven, and much more. 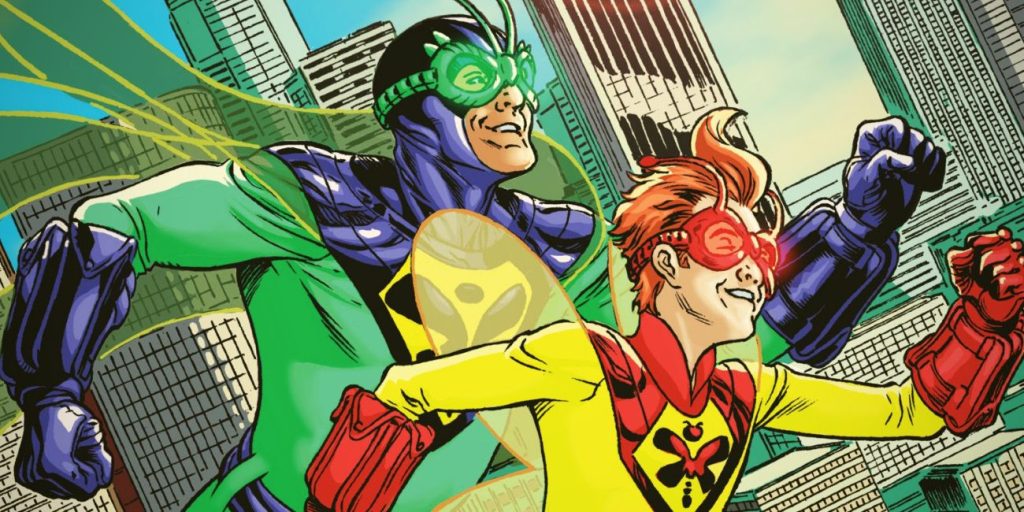 Thank you for giving us a little of your time, Tom.

How did a young man from Syracuse end up becoming a comic book writer? Did you have other ambitions growing up?

First I wanted to be a mild-mannered reporter for a great metropolitan newspaper. Then I wanted to be a comic book artist. After I took a serious look at my drawing ability, I wanted to be a comic book writer. You’ll note that all of my dream jobs involve a lot of sitting. Anyway, I slacked off a lot in my 20s, but during that time I wrote and drew a weekly comic strip for an alternative weekly, The Syracuse New Times. Top comics writer Roger Stern (The Avengers, Superman) lives nearby and was aware of my work, and he helped me break in.

You just touched on this subject but, as you started in your career, did you have a mentor or someone in the business who you looked up to?

I learned a fantastic amount from Roger; and from Karen Berger, who hired me as her assistant editor a year or so later; and from so many of the writers Karen and I worked with: Jamie Delano, Grant Morrison, Peter Milligan, Neil Gaiman. Karen founded Vertigo, and it was a great experience for me to be involved.

You said you started out as an artist, as many writers have. Did you or have you ever considered doing a book with you doing both writing and artwork?

If you saw my artwork you would bite your tongue.

I’m sure you’re being modest but I will have to take your word for that. Unless you want to send me some of your drawings…to evaluate them. Perhaps later.

You have worn many hats in your career. Specifically as writer and editor. Which job do you prefer, and what did each job teach you that you can apply to the other?

The Big Two vs. the Independent

During your career, you have worked with the two major comic book companies and also went the independent route. Did the work you did for the Big Two influence what you expected from the independents or did it show you what you DIDN’T want to do?

They’re very different animals. The best mainstream opportunities let you satisfy your childhood dreams; “I’m actually putting words in Superman’s mouth!” And the best indy situations let you tell your story the way you see fit without worrying about some larger universe.

So now, you are Writer and Editor in Chief at AHoy. How did you get with Ahoy Comics?

I was one of three people who started the company, along with publisher Hart Seely and chief creative officer Frank Cammuso. We’re old friends and we decided to jump in together.

Your latest compilation of DragonFly and DragonFlyMan comes out today. Where did the idea for Dragonfly and Dragonflyman come from?

I’ve been reading comics for a very long time, so I’ve seen specific characters change drastically over the years. So it was fun to find the most starkly contrasting examples and mush them into one story. The dragonfly motif was the genius inspiration of co-creator Jamal Igle.

In my review, I made the comparison of the 66 Batman TV series and the Frank Miller version of the Dark Knight. This was made even more clear while reading your Wrong Earth “first season“ as Dragonfly complained about Dragonflyman having everything in his car labeled. A definite tip of the hat to the TV show. Was this your intention?

To a degree, but not entirely. The  TV show made fun of these childish old Batman comics, but the mockery was earned, and virtually all comics were like that. A Dragonflyman scene is as likely to be inspired by Green Arrow or Ant-Man.  Likewise, Dragonfly has some Punisher and Wolverine in him. But if you want to talk Batman, he’s pretty close to the Ben Affleck version, who actually branded criminals with a red-hot bat-brand.  Yeesh!

When you think of that, maybe DragonFly doesn’t seem quite so severe. 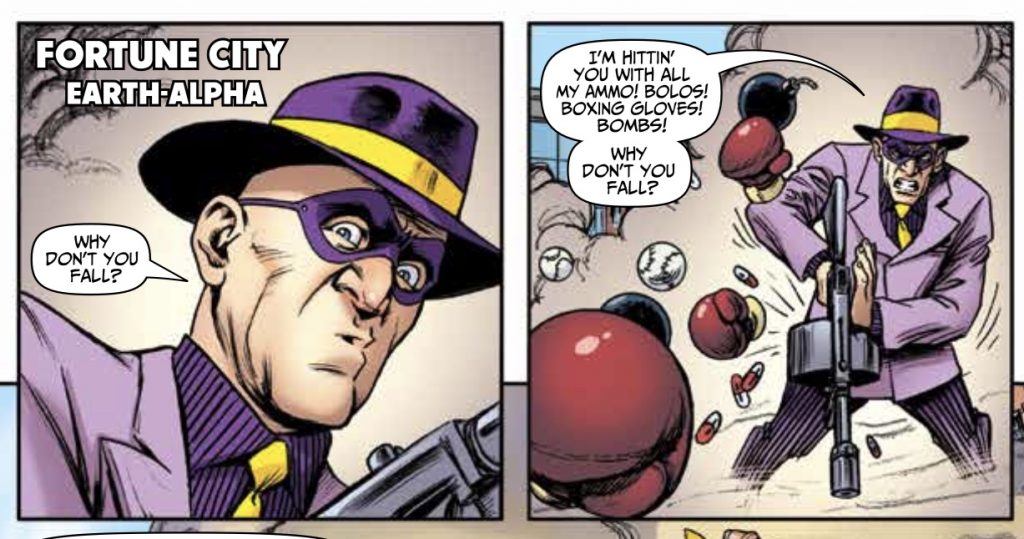 Thanks! Like I said, just about any comic from 1948 to about 1970 has something in it for Dragonflyman. The boxing glove gun was inspired by Green Arrow’s boxing glove arrow. Which he kept in his quiver next to his atomic warhead arrow. I’m not kidding.

Perhaps Oliver though that a “radiated” Boxing Glove arrow would pack more punch…(so to speak). 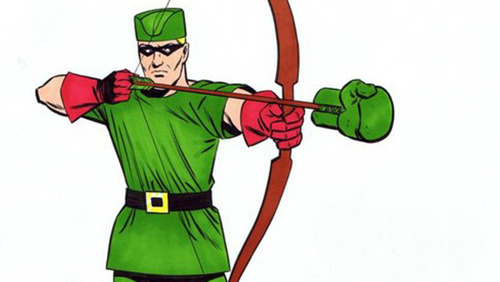 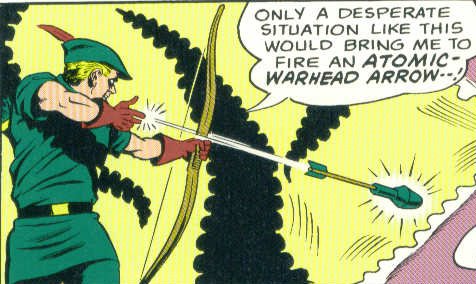 Between The Wrong Earth and Dragonfly and Dragonflyman, you have worked with two great artists in Jamal Igle and Peter Krause. Do you follow the same workflow with each collaborator? How much of a collaborative effort is it? Is it script based or do you give them a basic outline and turn them loose?

And Russ Braun, too! He did our Free Comic Book Day 2019 offering, and the D&D collected edition leads with that. But to answer your question: I usually write a full script carved into pages and panels. But I try not to describe the panels to an overbearing degree. You want to leave artists like Jamal, Peter, and Russ room to create.

A final Hypothetical Question: It has been decided that a time capsule will be created preserving the greatest examples of the comic book genre. They have come to you, Tom Peyer, and requested  at least three of what you would consider to be your finest work. What would you select?

This question presents a crippling challenge both to my ravenous ego and to whatever survival mechanism drives me to be publicly self-deprecating, so I’m going to cheat. I think the best comics that had my credit were ones I was associated with as an assistant editor, or editor. So they’re not my work, but I don’t think I’ve yet written anything to the standard of “Dead Boy’s Heart,” a Hellblazer issue (#35) by Jamie Delano and Sean Phillips, or Grant Morrison and Vince Giarrano’s hilarious Doom Patrol story, “The Beard Hunter” (v2 #45). Which leaves one slot for Tom the Writer. Hmm. Might as well say The Wrong Earth since we’re here, right?

Right! I thought you were going to go all noble on me and not include ANY of your writing work. Must be the Editor in you.😏

What’s on the Horizon for Ahoy Comics

Thank you Tom for your time. I know that the Dragonfly and Dragonflyman book comes out today. Are there any other projects upcoming you would like our followers to know about?

Watch for Ash & Thorn #1, by Mariah McCourt and Soo Lee, with covers by Jill Thompson, due out at the end of June. It’ll be the first monthly AHOY comic of the pandemic era to hit shops. There are other firsts as well; it’s the first AHOY to be edited by Sarah Litt; and the first comic that stars elderly women who fight monsters! 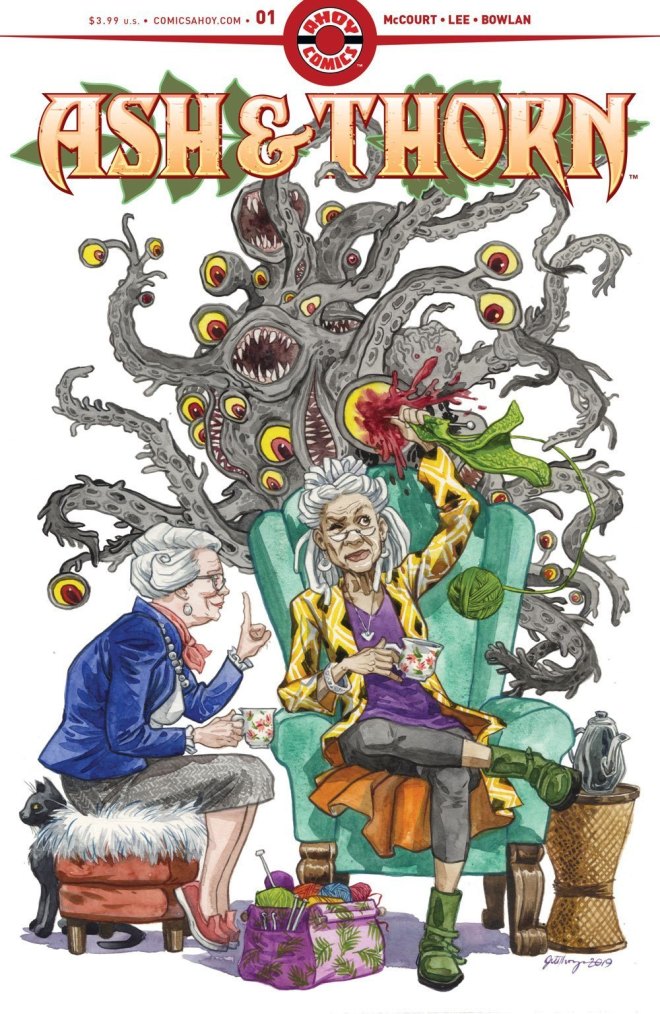 Remember that today is not only the release of DragonFly and DragonFlyMan but it is also being recognized as DragonFlyMan Day at Ahoy Comics. Perhaps the best way to honor the man, the legend is to get his book. As always, we invite your thoughts on it as well as any of the comics you love, here at GeekVibesNation.