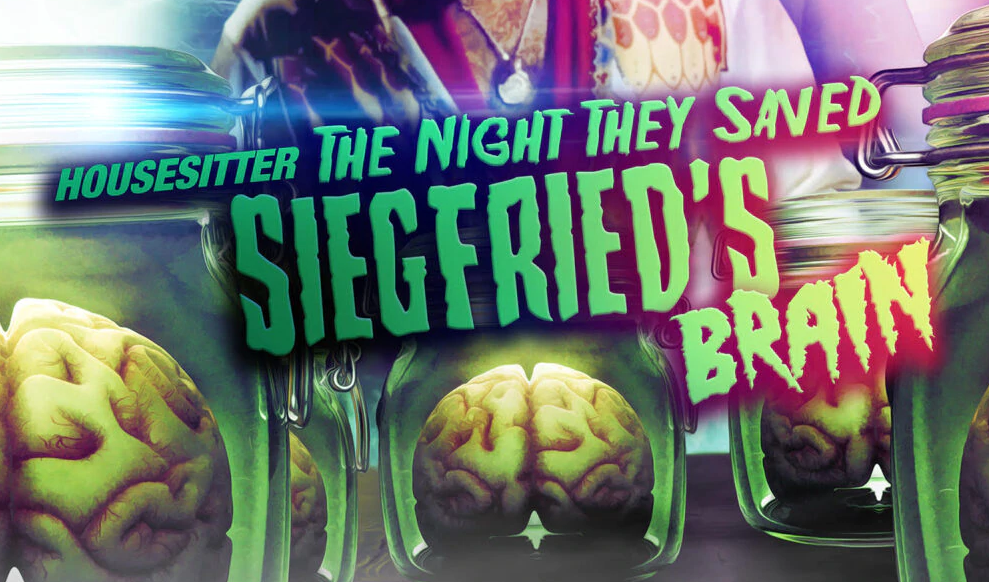 Filmed entirely in 1987, Housesitter…The Night They Saved Siegfried’s Brain sat unfinished for thirty-two years. Now, with post-sound from Skywalker Sound and final picture from Paramount Pictures color department, it is at last completed.

Combining 1980’s horror and 1950’s sci-fi, it is the story of Andy, an idealist medical student with a serious Elvis obsession, who is determination to perfect his rat-to-rat brain transfer to “help mankind and change the face of modern science”. After his final experiment fails and blows up, Andy loses his chance to travel abroad and study at the prestigious Reinhardt Institute. With his future in doubt, and with no place to live, his future looks bleak. Little does Andy know that his beloved professor and mentor, Doc Crosby, is actually a mad scientist who has been murdering people and stealing their brains for experiments in his makeshift “black and white” laboratory. When Doc realizes that his own brains so severely damaged from experimenting on himself, and that he will be dead in a matter of hours without a successful brain transfer, he hatches a scheme to acquire the thirteen human brains needed for his “brain pyramid”. Knowing that Andy is homeless and that college kids can’t resist having big parties, Doc invites Andy to housesit while he goes away on “business”. After he frees his deranged lab assistant from the insane asylum, and with his house now full of healthy unsuspecting college kids, Doc’s trap is set. When the party begins, so does the deadly game of cat and mouse. Will Andy save his friends from the scalpel of a madman, or will Doc succeed in his murderous plot to save his own life by completing the first even human brain transference procedure?

We spoke to Gasparian about the legendary film!

The film looks great. Have you had a chance to see a film with an audience yet?  How was the reaction?

Yes, I have gotten a chance to see the film in front of a couple of film festival audiences. The reaction was great with lots of laughs, which was a relief. I definitely didn’t know what to expect. I mean, Robin and I think it’s funny of course, but when you have lived with a film a long as we have, it’s easy to lose perspective. So far, we are pleased with the limited reactions we have seen.

It has sort of a “Man with Two Brains” vibe? Is that, right? Did those wacky classics of the ‘80s serve as inspiration at the time?

Well, keep in mind that this was written and shot during those wacky 1980’s. We were riffing on 80’s horror genre for sure, but Robin and I are really turned on by 50’s and 60’s sci-fi. That was our inspiration for the black and white scenes in Doc’s lab. The colorful world 80’s horror meets the black and white world of 50’s sci-fi. That’s a killer combo! (pun intended!)

When exactly did you first roll film on it?

We started principal photography in Kalamazoo, Michigan in the summer of 1987. We shot six days a week for six weeks. We were in the midst of filming when the story came out in the National Enquirer that Elvis had been spotted at the local Burger King in Kalamazoo. I swear, we had nothing to do with that.

Can you explain why it wasn’t completed at the time?

After principal photography wrapped, we were out of money. We knew that we had something, if we could only get it finished. We put a 20-minute teaser reel together, and set about finding finishing money and distribution. It was a tough road. Companies that liked what they saw, said to come back when it’s finished. Companies with money wanted to take it away from us.  It was, and still is, treacherous waters for beginning filmmakers. We were so concerned with getting a guarantee to pay back our original investors (mostly family and friends); we ended up passing on the offers we got. Then the proverbial door closed. Robin and I managed to cobble together a very rough cut and we’ve been living with that until Skywalker and Paramount entered the scene.

Tell us about working with Skywalker and Paramount on the ‘resurrection’?

Working with Skywalker and Paramount took the film to a whole new level. We were fortunate to hook up with Scott Guitteau who has been at Skywalker for almost 30 years. When Robin met Scott and showed him our rough cut, he fell in love with it. Scott committed to a total redesign of our sound. Working with material from so long ago was a challenge, but Scott brought it home for us. Skywalker Ranch is such a beautiful and serene place, it’s easy to get inspired and revitalized while working crazy long hours.

Paramount also took our film up a notch. Mike Trainotti and his crew went above and beyond for us. Their work was probably the most evident improvement on the movie, because for thirty years the only picture we had was a quickly thrown together one-light. The guys at Paramount were excited to be working on project that was shot on 35mm in black and white…with black and white stock, by the way. And Robin and I couldn’t be happier with the result.

As a huge fan of your small-screen work, I have to ask what are you working on now in that realm?

HOUSESITTER : THE NIGHT THEY SAVED SIEGFRIED’S BRAIN is on Blu-ray and digital from Leomark Studios