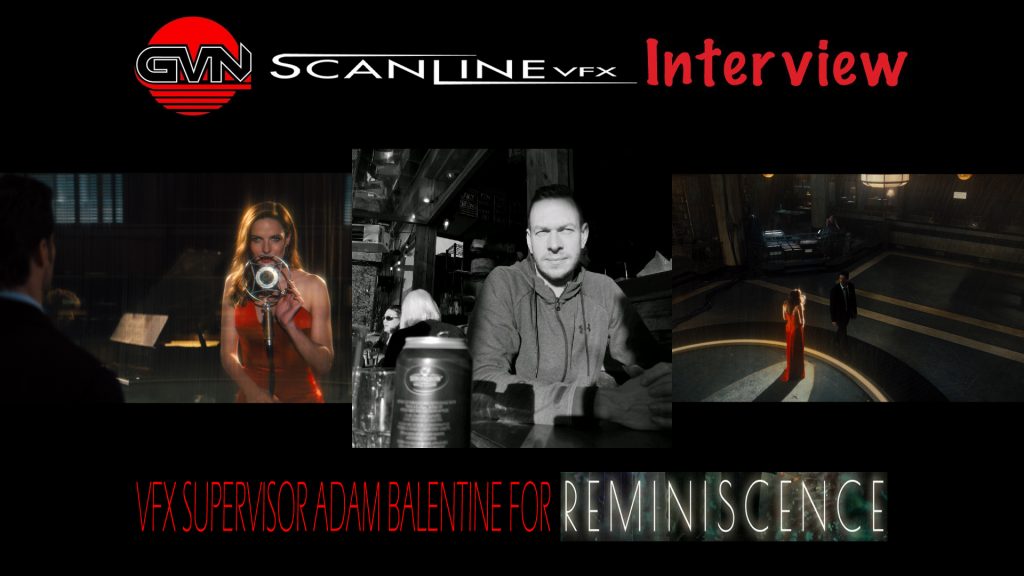 Reminiscence synopsis from our Review by Dom Fisher:

Nick Bannister (Jackman), a private investigator of the mind, navigates the darkly alluring world of the past by helping his clients access lost memories. Living on the fringes of the sunken Miami coast, his life is forever changed when he takes on a new client, Mae (Ferguson). A simple matter of lost and found becomes a dangerous obsession. As Bannister fights to find the truth about Mae’s disappearance, he uncovers a violent conspiracy, and must ultimately answer the question: how far would you go to hold on to the ones you love?

So how do you begin to create a digital visual search through a clients past? That was the task that the Scanline VFX team was assigned during their work on the Warner Brothers film, Reminiscence. To accomplish this, Scanline relied on their crack team of VFX magicians, supervised by Adam Balentine and Co-VFX Supervisor Nick Crew. It was Adam and Nick’s job to bring their expertise to bear and to collaborate with their team to bring the Reminiscence project to fruition. We recently were able to catch up to Adam to find out about his beginnings and how the work Scanline was assigned was accomplished. So, let’s welcome VFX Supervisor Adam Balentine.

GVN: Thank you so much for sharing a bit of your time, Adam.

AB: Good to be here.

GVN: As is our norm, let us start with a bit of your background. What got you interested in doing VFX work? Was there a specific film or television show that got your creative juices flowing in that direction?

AB: In high school I had the opportunity to take an intro to computer graphics class. It was mainly Photoshop however we did do some basic 3D rendering in Bryce, which was a lot of fun and got me hooked. This was around the same time that Jurassic Park had been released and, like everyone else, I was blown away by the film and was amazed to see what was possible to create in CG.

GVN: What was your first professional VFX job and did you feel prepared for it when your opportunity came?

AB: After graduating from VCU I headed out to LA to attend SIGGRAPH mainly for the job fair. Zoic offered me an internship and I happily accepted. I felt totally unprepared to be honest, but the people I worked with were great mentors. It was there that I was first introduced to compositing and did some junior work on a film called Special. After that I was part of an apprenticeship at Rhythm & Hues which turned into a very enjoyable 7 year gig.

GVN: VCU? So you went to school in my back yard, here in Richmond. Small world. You had worked for several Effect Studios before you went to Scanline (including some work for ILM). As you moved to different positions and different companies, did the work change any? Basically, did the processes involved change depending on who you worked for?

AB: I’ve been very lucky to have worked with a few of the major VFX houses and I’ve met some wonderful people at each of them. Each has their own unique approach to VFX production and of course there are differences in software and pipeline. These differences have homogenized a bit over the years but each house definitely has their own personality and processes when it comes to shot production and priorities.

GVN: You were the VFX Supervisor for Lisa Joy’s Reminiscence starring Hugh Jackman. Going in, how much preparation time was necessary for the shots that Scanline would be responsible for? In addition, as you progressed, were there some scenes that required some thinking on your feet?

AB: My co-supervisor on the show Nick Crew handled the early development work so when I was brought on a lot of the prep work was already done. Defining the look of the REM machine was an iterative process that took several months to complete, which was a collaborative effort between myself, Nick, Bruce Jones, and our Lookdev Lead Cameron Thomas. The shots of Hugh and Rebecca meeting (virtually) in the machine were definitely the most technically challenging. We spent a lot of time in simulation and lookdev getting the string dynamics and overall appearance of the strings just right. In the end they turned out beautifully and are some of my favorite shots from our body of work on the film.

GVN: Scanline is known for their expertise in pyrotechnical and weather/water related effects. But, every project offers something new that might be a first for Scanline VFX (i.e. Godzilla vs. Kong). Did Reminiscence offer you any new opportunities to expand your portfolio?

AB: Reminiscence was definitely a unique challenge. Not only did our work have to be photo real but we also needed to invent a hologram machine that was both futuristic and nostalgic, and also beautiful without being visually distracting. In some sense when a city needs to be blown up you have an idea of what that should look like so these more abstract ideas are fun to explore. Not that I want to discount blowing up cities, that’s fun too.

GVN: Scanline delivered 158 total shots for the film, with the majority centered around the bank and the hologram machine. These scenes looked to be complex in nature, but they were brilliant in execution. Did they present any unusual challenges to bring them to fruition?

AB: One of my favorite and also the most challenging effect that we developed was the painting on of the memories, where the REM machine would begin to render a memory into the strings. This effect went through many iterations starting with a more physically tangible look where we see the individual photons travel along the strings and eventually form the memory. This was refined over time and eventually became a more subtle effect, which I think was for the best.

GVN: You were required to create a fully roto-animated Hugh Jackman. Whenever you are doing effects that require creating a digital actor, does the actual actor in question ever want to see what you are doing beforehand? Just out of curiosity if nothing else?

AB: To be clear, we didn’t replace Hugh with a digital version of himself for this film. We did, however, need to create roto-animated geometry of Hugh that closely aligned with his movements in order to have him interact with the digital strings in a realistic manner. We also used this geo to add interactive lighting onto Hugh when the strings were touched or snapped. Although I have worked with my share of digi-double actors for previous films, I can’t say that I’ve heard of any actors expressing interest in previewing the digital version of themselves. But that’s not to say it doesn’t happen. I have heard of actors having more interest, however, where digital makeup or de-aging is concerned but, I won’t get into specifics on that.

GVN: Thanks for the clarity. That’s why we bring on the VFX magicians of Scanline VFX. Among the 158 shots Scanline produced for the film, was there a scene or a shot that you and your team are the proudest of? Adversely, was there a scene where you felt that might have been better? I have found that VFX artists, like most artists, are their own worst critics.

AB: The shots of Hugh first entering the REM machine to meet Rebecca were definitely some of the most challenging and beautiful shots we had the pleasure of working on. As someone once said (George Lucas quoting Leonardo da Vinci?), a film is never finished, it’s only abandoned, and I think that’s true. If we had a lot more time there are definitely things I would have liked to revisit but really I am happy with our work.

Picking Amongst Your Children

GVN: We once again thank you for taking the time to talk to us, Adam. Before I let you go, I have a hypothetical question for you. In your career, you have worked on a number of high profile and to me, very cool films since you started with Scanline. We come to you and tell you we are creating a time capsule of the very best Scanline VFX scenes. We need three of examples of what you feel is your best work since you have joined with the company. What would you choose? (Oh, the pressure)

AB: The pressure indeed. Scanline VFX as a company has a huge portfolio of impressive visual effects work but if I had to pick three projects that I personally contributed to then Reminiscence would be on the list. For the other two, probably Justice League and Aquaman.